Balenciaga has had a great couple of years, recently outpacing Gucci as the “it” luxury brand. Both fashion houses now have broad appeal beyond the confines of designer fashion, but in 2022, Balenciaga has been in the news nonstop. Since its mainstream arrival, Balenciaga has been spotted on just about every A-list celebrity and was even jokingly said to be the sponsor of Kim Kardashian and Kanye West’s highly publicized divorce. Balenciaga notably partnered with West (formally known as Ye) during the release of his highly anticipated Donda album and also collaborated with him on the latest GAP X Yeezy project. 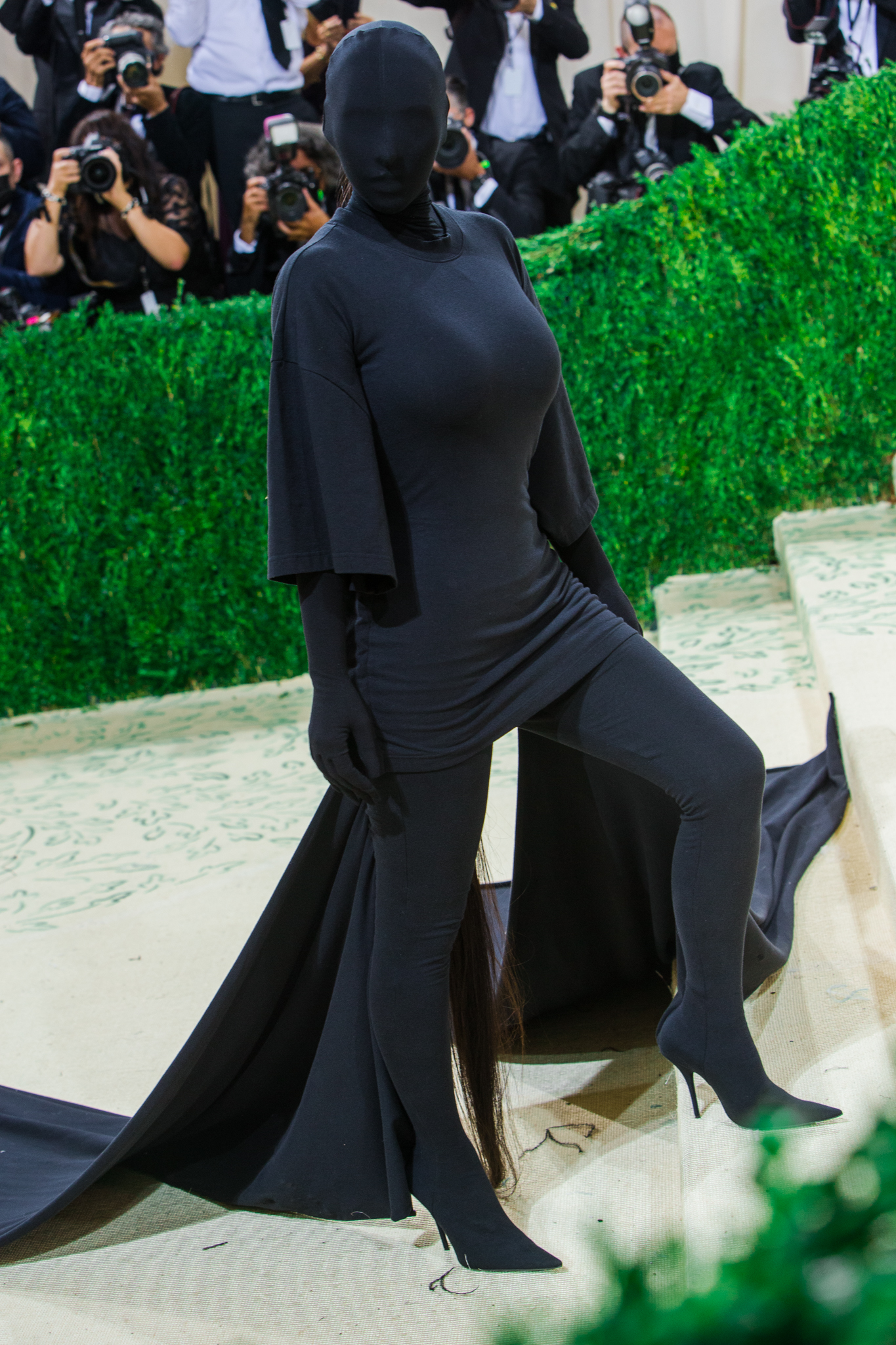 Kim Kardashian in Balenciaga at the 2021 Met Gala. Lexie Moreland for WWD

Not to mention the brand’s huge presence at the Met Gala this past year. Kim Kardashian’s cape and mask look, along with Rihanna’s oversized black coat and matching hat, were the talk of the event. Balenciaga even showed up during a special episode of The Simpsons at Paris Fashion Week in October 2021 and created a virtual apparel collection for the popular game Fortnite, which has certainly helped boost its popularity among the Millennial and Gen Z demographic. 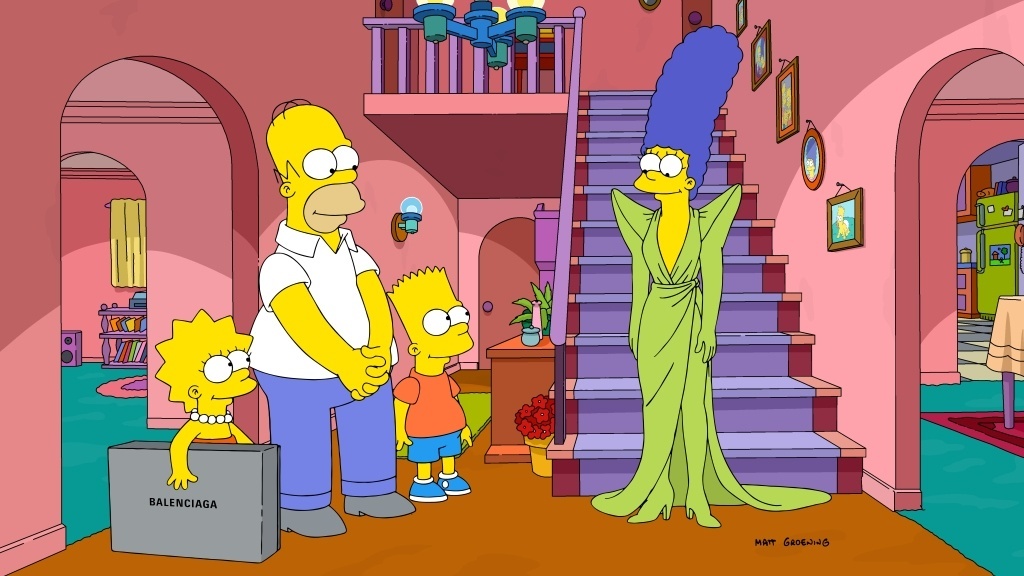 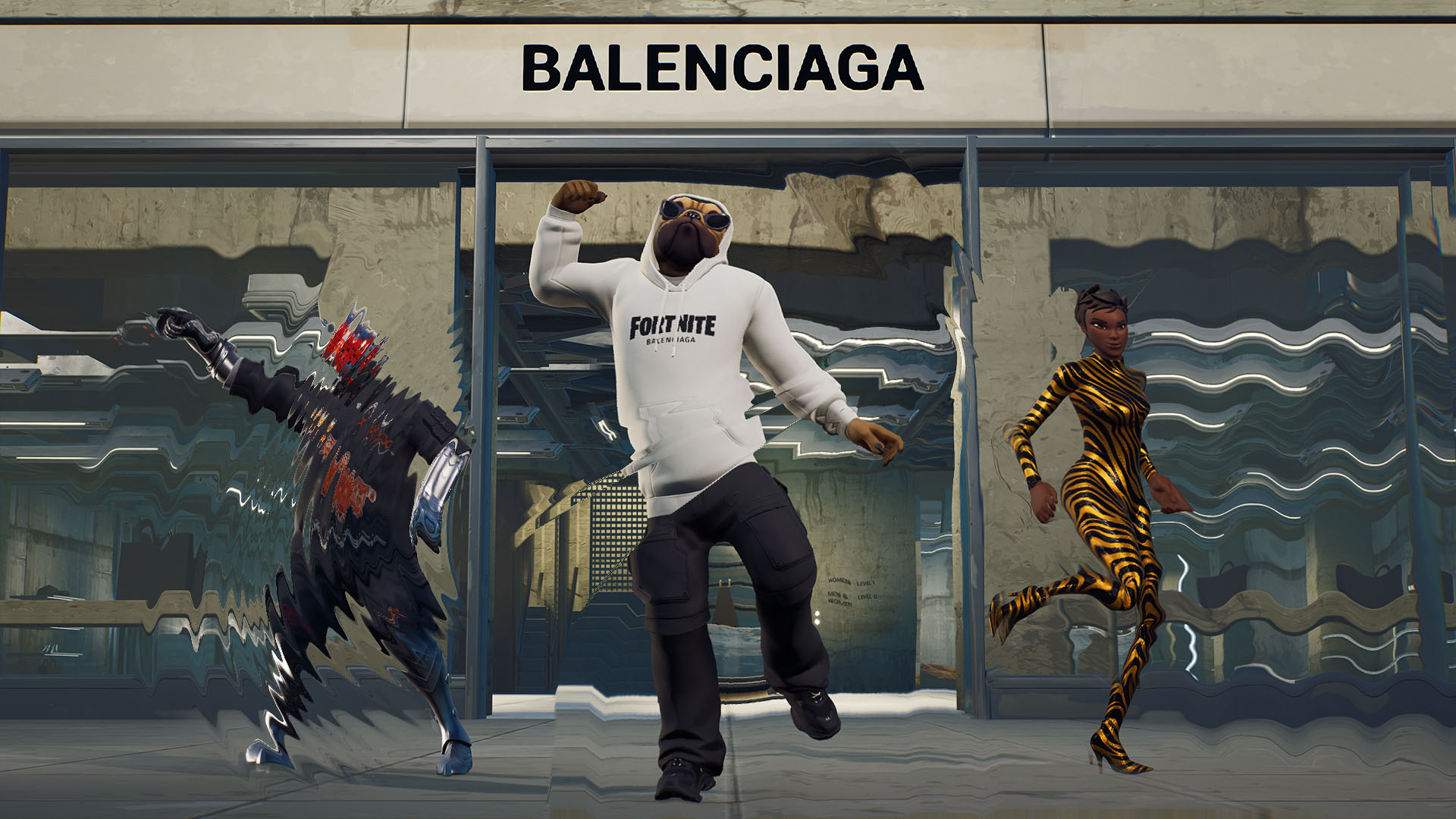 So why do we say that Balenciaga is the new Gucci? You don’t just have to take the zeitgeist’s word for it.

The Lyst Index for Q4 of 2021 named Balenciaga as the top fashion brand of the quarter, knocking Gucci out of the top spot for the second quarter in a row. The Balenciaga brand was also listed as one of Time’s Most Influential Brands of 2022. Then there was the viral Fall 2022 snow globe fashion show and the long list of brand collaborations with Yeezy X GAP, Crocs, and Gucci’s Hacker Project, which have certainly helped its visibility in the mainstream market over the last year.

In 2018, Balenciaga was revealed to be the fastest-growing brand within the Kering Group, which notably owns both Gucci and Balenciaga along with other large names in the luxury fashion industry such as Saint Laurent, Bottega Veneta and Alexander McQueen, according to Business of Fashion.

There was a time, just a few years back, when Gucci reigned as queen of the fashion world. It seemed that everyone from A-list celebrities to your next-door neighbor started rocking Gucci Marmont belts, Gucci handbags or something else sporting the brand’s iconic motifs. However, over the past five years or so, it seems that Balenciaga has officially become the new it girl in town, not only popping up everywhere in the celebrity world but also making its mark on the general populace.

It’s safe to assume that this newfound fame would all circle back to Balenciaga’s Creative Director and co-founder of Ventements, Demna Gvaslia, who took the reigns at Balenciaga in 2015 following Alexander Wang’s exit. 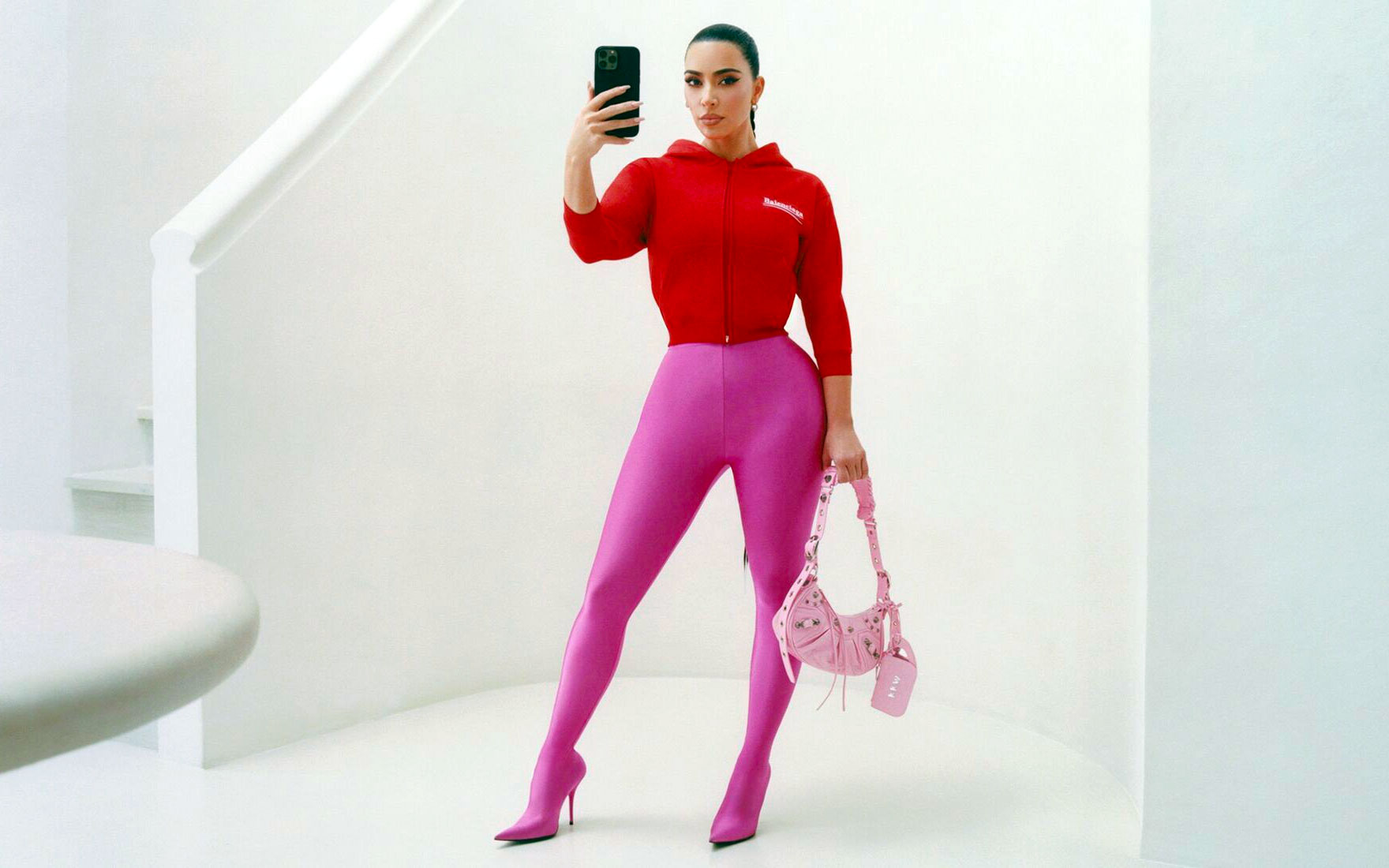 We recently caught up with Wesmore Perriott, a Stylist, Image and Creative Consultant at Defending Champs, and asked for his thoughts on Balenciaga’s skyrocketing popularity.

“Balenciaga has done an excellent job at tapping in with the youth and evolving as a more futuristic brand,” Perriott explained. “Incorporating collabs with Gucci and global artists into their fashion realm has helped the brand to remain relevant as a luxurious fashion house.”

Perriott notes that his own sense of style “has always involved Balenciaga” and explains that “Demna’s silhouettes and androgynous tailoring” have played a huge role in the brand’s popularity.

Demna is also unusually daring for a fashion designer. After Demna protested the war in Ukraine during the infamous snow globe runway show, The New York Times style section noted that Demna has gone “where fashion hasn’t dared go before”. The Times also named it “the show of the season”, and it most definitely was. 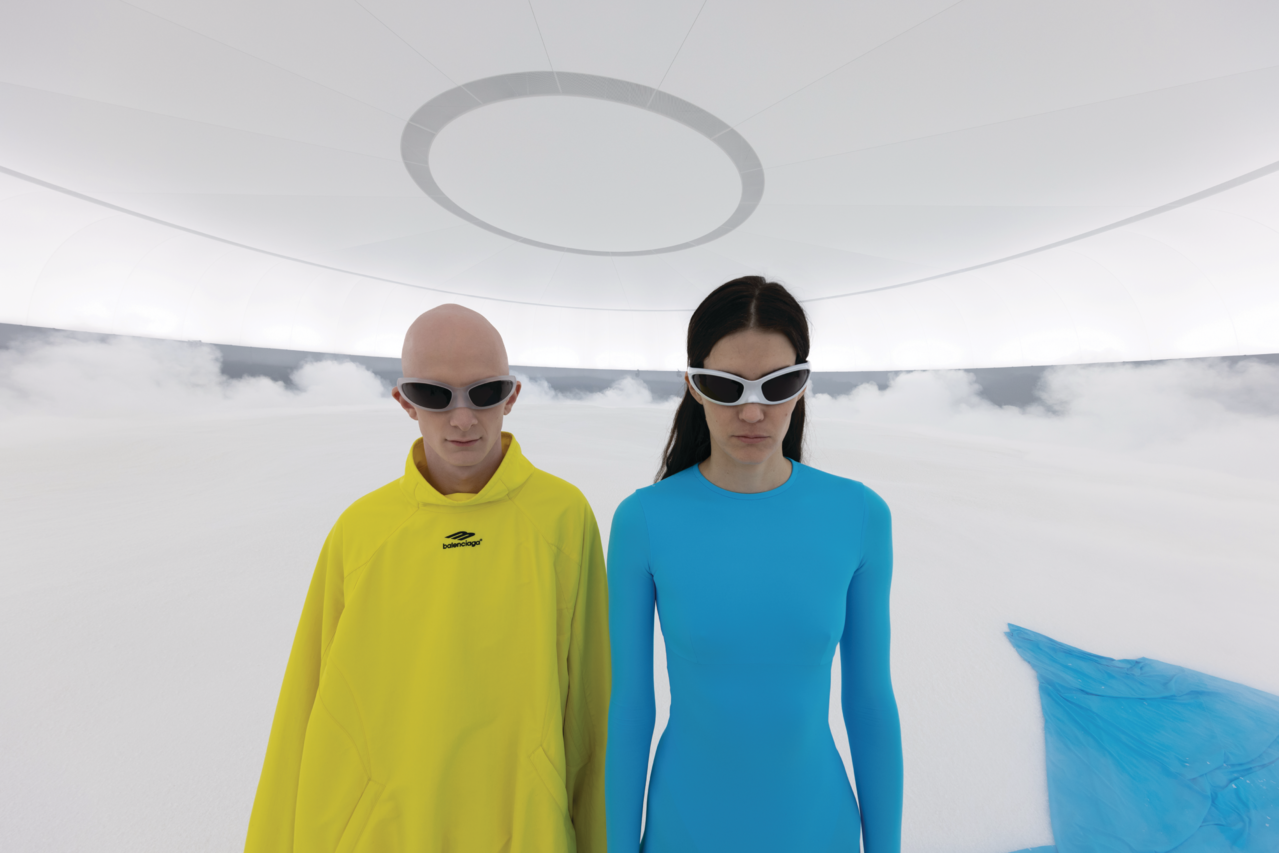 Models wearing the colors of the Ukranian flag during the Balenciaga “snow globe” runway show. Courtesy of Balenciaga

One of Balenciaga’s more popular releases has actually been a collaboration with Gucci, donned The Hacker Project. The merging, which features an ingenious pairing of Gucci and Balenciaga silhouettes, textiles, and patterns, offers the best of both worlds for fans of the brands, allowing buyers to wear each of the fashion houses’ most iconic insignias in one piece. 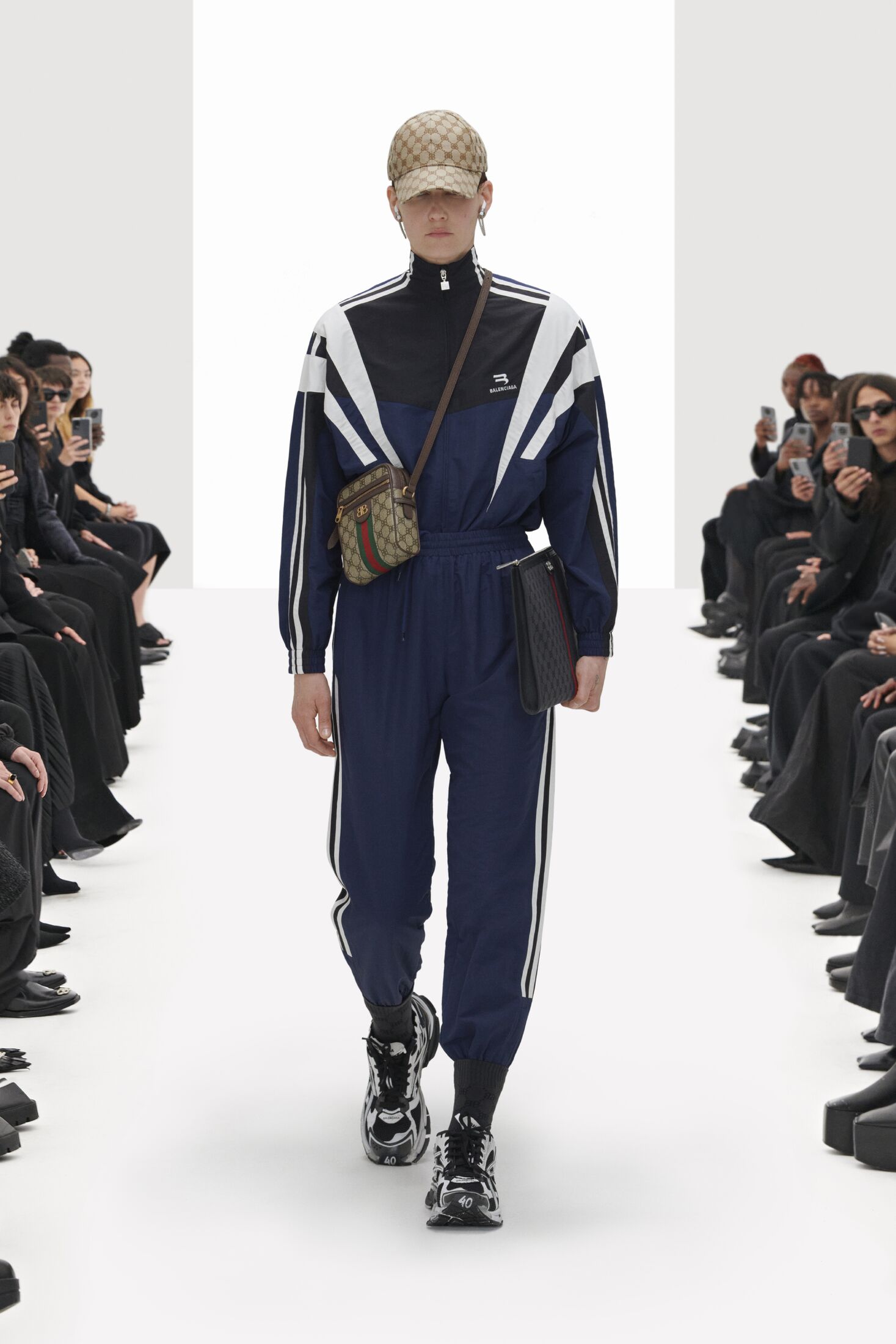 These amazing hybrid pieces have been spotted all over the media and social sphere, worn by the Who’s Who of entertainment and fashion, including Beyoncé, Sarah Jessica Parker, Rihanna, and Miley Cyrus — just to name a few. Balenciaga’s website offers more insight into the joint project, explaining, “The Hacker Project presents pieces that merge Balenciaga and Gucci House codes and in so doing explores and questions the ideas of authenticity, counterfeiting, and appropriation within the fashion industry.”

As for what’s next for Balenciaga — the Paris-based fashion house is expected to unveil its Spring 2023 collection in New York City On May 21, according to our colleagues at WWD. Recently leaked photos also preview an upcoming collaboration with Adidas, further proof that the brand continues to cement its appeal with younger shoppers.

At this rate, Balenciaga shows no signs of stopping its bid for world fashion domination. With rising visibility and household name status, it’s certainly pushed Gucci into a supporting role.