There’s a good chance you didn’t know J. Crew filed for bankruptcy during the 2020 pandemic. The retailer subsequently exited Chapter 11 with new lenders behind it but uncertainty around how the brand would move forward. In diehard menswear circles, J. Crew is seen as a nostalgic relic. For casual shoppers, the prices were likely too expensive. So how would J. Crew thread the needle moving forward? The answer: Brendon Babenzien.

You may not know his name, but you likely know his oeuvre. Babenzien was the lead designer at Supreme, leading the brand into the instant-sell-out entity that it now is. He’s also gone on to great success at his brand Noah, which balances streetwear staples like tees and hoodies alongside luxe sweaters and sturdy wool trousers. The clothes look good but it’s really about their quality; as such, Noah features a tab on its website about the nitty-gritty of its fabrics to help its customers better understand the foundation of what they’re wearing. That ethos is now what’s driving J. Crew.

“My first collection with J. Crew focuses on American classics with subtle alterations that aren’t intended to be attention seeking — but that cannot be ignored,” Babenzien said in a statement. “J. Crew has been synonymous with American style for nearly 40 years. We’ve honored that heritage by creating clothing that encourages individual style and confidence, with the hope that each piece will outlive trends that come and go.”

To be slightly reductive, the old J. Crew was a way of providing elevated office staples at a reasonable price for men out of college with a touch more money in their pocket. Under Babenzien, the new collection is even more straightforward, highlighting well-made classic pieces with just a touch more character and attitude to them.

Take Babenzien’s first hit: the Giant Fit Chinos. Already a sell-out (the pants are still live on the brand’s site, but you’ll notice it’s a pre-order link for the ship date at the end of October), diehard menswear enthusiasts will notice they’re not radically different from the larger silhouettes favored by designers over the last few years. But for the average J. Crew customer, they’re probably a more radical shift. They don’t look huge on the website but once you’ve seen them in person, you’ll notice they’re way roomier than you imagined. The chinos sum up the new ethos in a nutshell: Let’s take something well-established and, well, freak it accordingly. 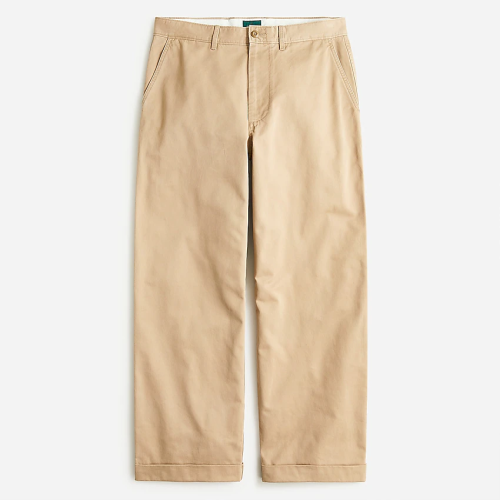 This reimagining extends to the construction of the clothes, too. For example, a wool crewneck sweater is elevated by using a brushed wool. That simple texture is a staple of many of Babenzien’s offerings at Noah in previous years but seeing it at J. Crew, of all places, is going to turn some heads. The brushed effect not only makes it much softer and less itchy than wool (it’s closer to a cotton feel), but that “hairy” texture is something you’d typically find at a more premium store. 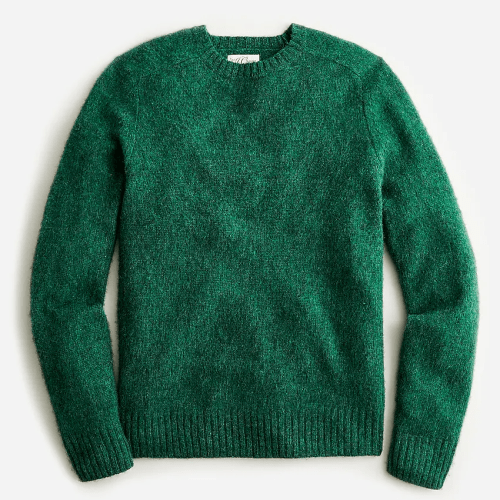 You can really feel the difference. J. Crew sent along a sample of its Barn Jacket. The overall look is pulled from an ’80s design, with the interior sourced from PrimaLoft Black Eco, a lightweight yet warm insulate crafted from recycled bottles. The wool outer comes from an English wool mill called Abraham Moon & Sons. The jacket not only feels great but feels well made and certainly justifies its price. There’s care and craft in each stitch, something that can be difficult to say about other big box, mall retailers. This coat feels like the first J. Crew piece in a while that feels sturdy enough to actively pass down to the next generation. 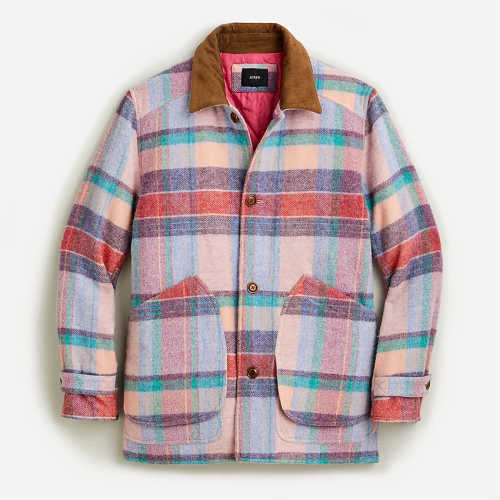 It’s still a little early to definitively state, one way or another, whether or not J. Crew is officially back. But we can, with some certainty, say they’re charting the correct course. Where they’re going and how long it takes is to be determined. But being out of the directionless wilderness is a victory in and of itself. We can’t wait to see what else the journey brings.

Style Meets Function: The Best Work Jackets To Buy in 2022