Streetwear thrives on buzz, and that’s exactly what New York-based brand Kith created with its latest campaign, featuring none other than comedy icon Jerry Seinfeld. Putting distinguished but unconventional faces in streetwear is par for the course for Kith, which has dressed Steve Buscemi in florals and Michael Imperioli in tracksuits. But the Seinfeld campaign has created the most buzz, and by buzz, we mean memes. Of all the campaigns, seeing Seinfeld giving his best blue steel is the most jarring for reasons that are difficult to pin down but easy to joke about.

Nonetheless, it’s a big deal for Kith’s founder Ronnie Fieg, who wrote on his Instagram, “There are a handful of people that I’ve dreamed of working with from a young age. On the very top of that list was Jerry. There are very few individuals that have had the kind of impact Jerry had on me.” Seinfeld fits in with Kith’s love of notable New Yorkers, and it’s no surprise to see the comedian wearing a Mets hat. 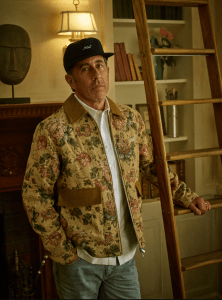 In theory, the clothes don’t feel too far off from what Seinfeld wore on his eponymous show. Chunky sneakers with light blue jeans were his regular look, as were casually worn dress shirts and bombers. All of those are featured in this lookbook. Maybe there’s something about Seinfeld’s expressions or the styling that is startling. Much has been made of Seinfeld’s age relative to the presumed target audience for a streetwear brand. I’d submit that it might be Jerry Seinfeld’s Seinfeldness, more than his age, that puts this campaign on an odd footing.

A Steve Buscemi can just as easily inhabit an intimidating gangster in Boardwalk Empire as a goofy private eye on 30 Rock. So seeing him swaddled in floral print jackets and bucket hats oddly made sense. For better or worse, Jerry Seinfeld can only ever really be Jerry Seinfeld. In his defense, he spent nine seasons of his TV show telling us just that. 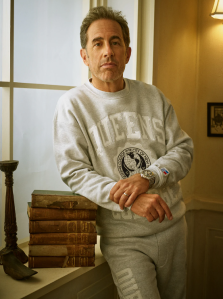 One of the best style writers, Derek Guy, posited a similar case in reviewing Stephen Colbert’s look on the cover of WSJ magazine in March of this year. (Guy also made the best quip about the Seinfeld campaign with the tweet, “How do you do, fellow Kiths,” which is a reference to a Buscemi character. It all comes full circle). Of Colbert’s bomber and jogger look, Guy argued that you should dress “for a vibe,” something the stylists dressing Colbert didn’t accomplish.

In essence, Guy argued, “Everyone has a natural kind of vibe. Your vibe is your personality, how you move, speak, and interact with the world. It’s your natural disposition. Finding your style is partly about connecting your clothes to this vibe.” Colbert’s penchant for a neat haircut and conservative glasses didn’t mesh well with his streetwear-adjacent look. The same can be said of the mashup between Seinfeld’s perennially bemused smirk and the slim jeans and trendy sneakers he’s wearing. 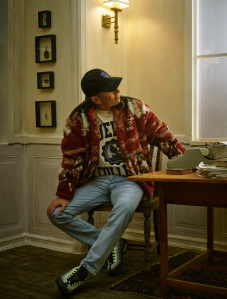 As overused as the word “vibe” is, Guy is hitting on something tangible that helps explain where the Seinfeld campaign falls short. To reduce the issue to age is problematic for several reasons, among them the fact that we can personally think of several older men who wear clothes very well, including men who model “youthful” styles. A man over 50 doesn’t need to dress conservatively; Jeff Goldblum is nearly 70, and whether you like what he wears or not, his vibrant, clashing sense of style suits his energetic demeanor and tangent-prone manner of speaking. As much as we can recommend specific khakis or sneakers, style ultimately depends on how the clothes feel.

As for the collection itself, Kith racked up some notable collaborators. Fieg linked up with Russell Athletic again for The City University of New York (CUNY), Queens College and Brooklyn College, with a charitable angle of funding scholarship programs at those colleges. Likewise, Fieg linked up with New Balance and Clarks on footwear. The full collection is out this Friday. No word yet on whether Kith plans to release any puffy shirts.

Style Spy: ‘The White Lotus’ May Be the Vacation From Hell, But the Clothes Sure Looked Relaxing