When Joe Biden placed his hand on his enormous family bible to take the oath of office, and every time since when he’s sat down at the Resolute desk to sign a new batch of executive orders, there’s been one group of people paying very close attention. And I don’t mean policy wonks. Rather, it’s the watch nerd community that’s been focusing not on the documents Biden signs, but the timepiece he wears while doing it. And it’s an exciting time to be a Presidential watch-watcher because Joe Biden has proven to be something of a horological enthusiast. From affordable Seikos to investment-worthy Omegas, Biden has rotated through a surprisingly deep closet of timepieces both on the campaign trail and in the Oval Office.

Biden’s choice to wear luxury watches stands in contrast to some of his predecessors. In office, Bill Clinton and George W. Bush wore dirt-cheap Timexes, and Barack Obama wore a watch from Jorg Gray. Obama’s Jorg Gray was gifted to him by the Secret Service, and while it’s certainly more expensive than an Easy Reader or IronMan, it can be had for less than $400. The obvious reason Presidents avoid pricey timepieces in office is to not come off as elitist or out of touch. It’s perhaps not surprising that since leaving office, Clinton and Obama have been seen in Panerais and Rolexes.

Joe Biden’s Inauguration Day Rolex caught some by surprise, given that he’s someone who built his political identity on an “everyman” persona. But the truth is, Biden doesn’t need to carefully burnish his average Joe image. He commuted to work by train for 36 years while Senator and was raised in a middle-class background. Where someone like George W. Bush has to adopt the trappings of a guy you’d have a beer with to distract from his obvious family connections and business wealth from the oil industry, Joe Biden has no such background to hide. So cycling between Seikos and Rolexes might just have more to do with Biden’s own taste in watches than some carefully curated bit of fashion diplomacy. I asked self-professed expert watch spotter Nick Gould what he thought, and his answer was simple: Biden’s varied selection “shows he does genuinely like timepieces.”

With that in mind, we’ve decided to run down some of Biden’s notable watches that he’s worn on the trail and in office. We did our best to find shoppable versions of all of these watches (just in case you develop a serious case of watch envy) and linked them below.

The Datejust is the watch Biden wore on Inauguration Day, and it’s the one that’s arguably gotten the most attention. Some have wondered about his choice of the Datejust over the Day-Date, which was nicknamed the “President’s watch.” The Datejust was a gift from First Lady Dr. Jill Biden, which he presumably received sometime after the election (some speculated it was his late son Beau’s watch, but that was debunked). While the Day-Date is called the President’s watch, Biden isn’t the first to wear a Datejust — according to Gould, Eisenhower wore one as well.

The Omega is another watch brand with a Presidential pedigree, albeit a much more limited one — President Kennedy is apparently the only other President to wear an Omega. Kennedy’s was a gift, and it had a thin gold face and leather band in contrast to the beefy diver watch that Biden wears. Biden has owned the Seamaster for some time, and it has made an appearance on his wrist since he’s been in office.

Biden’s most affordable watch is likely his Seiko Chronograph, which is distinctive for its two-tone design. The steel bracelet is surrounded by gold accents. Biden’s Seiko is an eminently practical watch — not only is it inexpensive, but it has a date window, chronograph features and even an alarm, which makes sense on a busy and grueling campaign trail. If a pattern is emerging, it’s that the President clearly favors metal bracelets, preferring steel to gold. Cost seems to be less of a factor than personal taste.

The Seamaster isn’t Biden’s only Omega — he also has a Speedmaster. The Speedmaster is a racing watch that’s notable for its association with NASA. He sported it on the cover of InStyle. In that photo shoot, he wore other sturdy, rugged clothes like a Levi’s denim shirt, leather jacket and of course, Ray-Ban aviators.

Joe Biden’s political ideologies have shifted in a more progressive direction over time, and his taste in watches has become more forward-thinking. He’s the first sitting President to wear an Apple Watch, and it’s a sensible pick for someone who undoubtedly has a lot of calendar items to keep track of. The Apple Watch also has a fitness tracker, which is in line with the President’s enthusiasm for the Peloton.

The Vulcain Cricket is the watch Biden wore for his portrait as Vice President, and he wore it throughout his tenure as Veep. The Rolex Day-Date is not the only watch that claims to be for Presidents — Vulcain similarly calls its Cricket the President’s watch. Vulcain has actually gifted a watch to most sitting presidents. President Truman started the tradition, but Eisenhower, Johnson and Nixon were all photographed with the Cricket.

Biden’s sportiest watch is probably his Tissot T-Touch. It hasn’t been seen in a while, but he wore it while he was Vice President. Eschewing traditional bracelets or leather bands, the T-Touch has a notably sportier rubber bracelet. It’s packed with features, including a compass, altimeter, weather, alarm and chronograph. 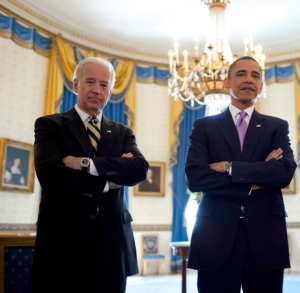 The Best Dive Watches up to 300 Meters