Most folks like to wear sandals in the summertime, but Kanye West isn’t like most folks. The mogul was recently spotted wearing a pair of military-inspired Yeezy boots. Get the story from Footwear News and shop below.

From Footwear News:
Even with the right materials, wearing a pair of chunky boots at the height of summer is no easy task. But leave it to Kanye West to not only make it look easy but not even break a sweat in the warm Los Angeles sun.

The Adidas collaborator was spotted out and about yesterday in a pair of his own Yeezy boots. This military-inspired style features a high-top leather and nylon build with a rugged rubber outsole.

West paired the Yeezy boots with gray paint-splattered Helmut Lang jeans and a short sleeve pink crewneck sweatshirt. A similar Yeezy boot style can be purchased now for 30 percent off ($443) from farfetch.com. 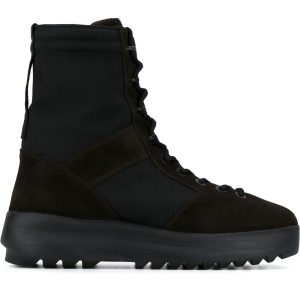 In related news, West and Adidas re-released the sought-after Yeezy Boost 350 V2 “Zebra” sneakers on June 24. The launch was one of the most memorable Yeezy drops yet, with massive queues and altercations over alleged app hacking.

This article is being republished with the permission of Footwear News. To read the original version, click here. If you buy something because we told you about it, we may receive compensation from retail partners.