Kevin Durant launched his latest sneaker with Nike today, with a dessert themed campaign. The ‘Red Velvet’ theme may just have a subliminal message attached–and it’s  got nothing to do with cupcakes. Read more from Footwear News and shop the new style below:

From FN:
For Kevin Durant’s latest sneakers with Nike, the 2017 NBA champion and sportswear brand took inspiration from what may seem like an unlikely place for basketball: dessert. However, upon closer examination, it appears that the KDX Red Velvet shoes could actually be a subliminal jab at all of Durant’s critics.

Featuring a fire-red upper and white dotted sole, Nike equates the Red Velvet moniker of the new KDX sneakers to Durant’s “smooth as velvet” style of play. In Nike’s description, the brand continues by saying, “At the end of the day, winning is all that matters, and anything else is just icing on the cake. The KDX ‘Red Velvet’ celebrates the smoothest player in the game and his undying quest for the sweet taste of victory.” 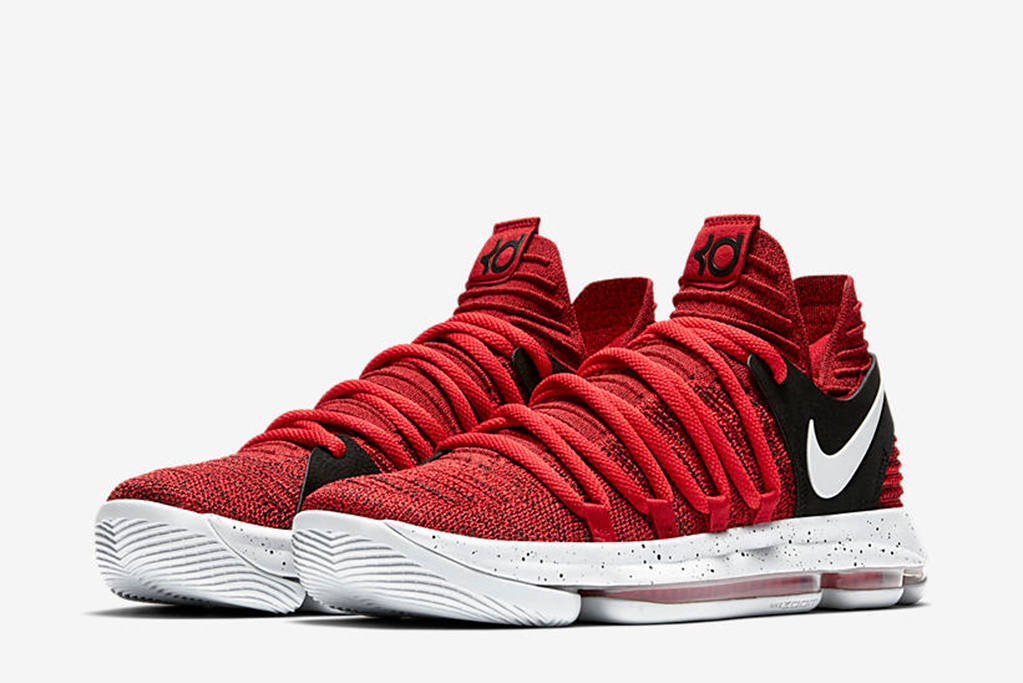 While this is one practical theory behind the sneaker’s design, it’s also highly feasible that the cupcake marketing around the Red Velvet sneakers are a jab at former Oklahoma City Thunder teammate Russell Westbrook and other naysayers of Durant’s departure. The day that Durant left OKC, Westbrook posted a picture of cupcakes on social media. It was subsequently discovered that former OKC player Kendrick Perkins was known for calling teammates he deemed soft “cupcakes.”

When Durant later went to play in Oklahoma City after leaving the team, fans taunted him by holding cupcake signs, shouting the term at him from the stands as he played, and even dressing up as cupcakes. However, Durant’s new Golden State Warriors teammates Stephen Curry and Draymond Green answered back at the postgame press conference in cupcake T-shirts of their own.

Since then, Durant has completely taken a term that was meant to belittle him and turned it on its head. Or better yet, with his latest Nike KDX Red Velvet shoes, on its feet. The sneakers are available to shop now.