Renaissance man is an overused term. It’s deployed too often to describe men who merely straddle more than one profession, or who are well read and cultured. But a real renaissance man is much more. He is defined by the depth and curation of his experiences, and not intentionally aimed at building a marketable aesthetic, but in a genuine, soulful way.

Lono Brazil is a renaissance man. If you don’t know Lono Brazil’s name, you know his face. As a mature model, Brazil has risen to modeling success over the last decade in a way few men have. While writing this story, I got three catalogs with his face on the glossy pages. He blends in seamlessly with models half his age and still manages to draw your eye. Brazil is setting the tone for other men his age in the industry; he’s a radical success in a world that has seen slow progress over the years regarding inclusion.

Not long ago, older men had a very specific niche in the modeling world, and if you saw them at all, you most likely saw them as the face of hair dye or reading glasses. Instead, Brazil has been modeling for J.Crew, Banana Republic, Mango, Kith, and Bonobos, just a few of the brands he’s worked with recently. Rick Owens fits him like a glove, and you can find him on Instagram modeling Gucci eyewear for Macy’s. 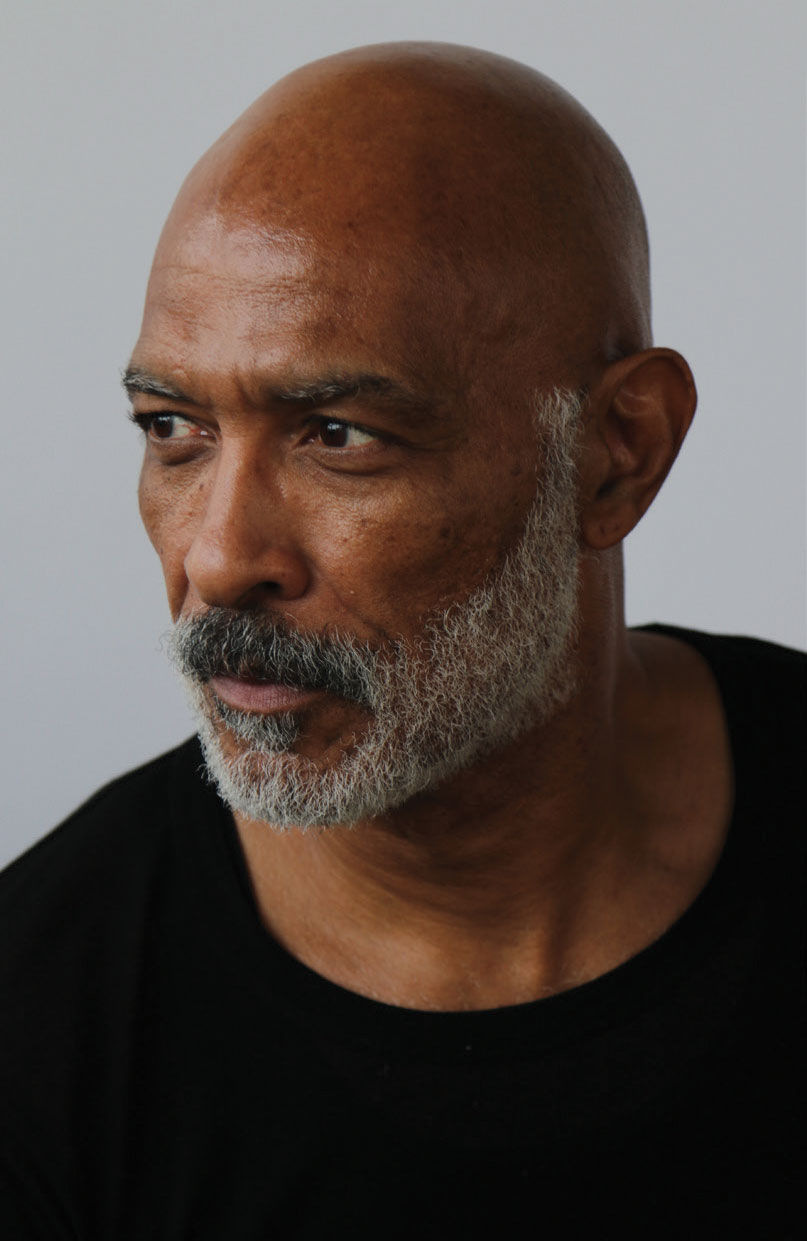 To call Lono a model feels reductive. In the two hours we spent chatting over Facetime, I watched Brazil shapeshift from OG ’80s club kid to fashion icon, from commercial and editorial model to proud dad, all in the span of our conversation. Brazil was circumspect about his exact age, but he’s proving that models don’t have to retire when they turn 21.

It wasn’t always this way; there was a time when the best in the business told Brazil he wouldn’t make it as a model. As a young guy trying to break into the industry, he says he was up against the tokenism of the time; agencies had few Black models, and he says his racial ambiguity played against him.

“I believe I was a bit too ahead of my time. Now I’m considered to be racially ambiguous, and I believe that’s why I work as well as I do, and as much as I do,” he says. “But I think in the late ’70s, early ’80s, racial ambiguity was not the thing, especially in America. They had ad agencies that hired black models, they had Hispanic agencies that hired Hispanic models, and the rest of the agencies hired white models.

Brazil was born in Chicago, the first generation in his family not born in Louisiana. His family is French Creole and part Native American Indian; his first language at home was French or Creole. After spending some time living with his grandparents, he spent his preteen and teenage years on the South Side of Chicago. After two years of art school, he moved to New York, but his style roots were already taking shape.

“Before I left Chicago, even in high school, we started reading GQ Magazine,” he says. “And we started to care about how we looked because we wanted girls, so cute girls wanted cool-looking guys, so we wanted to be cool, so we started dressing like the guys in GQ.” He talks about a pair of sunglasses he worked to save up for — a brand called Color in Optics. “Everyone had to have them, and very few guys my age, if any, had them. But I worked and got a pair.”

He also said he knew at that age that he wanted to be a model. “You have to understand that growing up on the south side of Chicago, it’s rough. It’s a lot of violence, gangs, and all that, so you have to be pretty brave to say, ‘I’m a model.’”

Once he was living in New York, he became a fixture in the music and club scene. He started working at a nightclub called Nell’s, which he described as a smaller, more select version of Studio 54. From there, he embedded himself in an elite circle of people in music, fashion and art. He talks nonchalantly about friendships with Keith Haring and Basquiat. “I helped [Keith] hang his last show before he passed,” he shares. “So we were close. He left me some pieces.”

He started organizing events and parties for the top names in the hip-hop scene like P. Diddy and Def Jam; he worked as a record executive in music with groups like the Beastie Boys; he DJ’d; he traveled the world working in fashion with labels like Stussy — one of the original streetwear brands. Photos of him became a fixture on fashion blogs, but modeling was always just over the horizon.

Then a family friend introduced him to David Ralph, a former model himself and an agent.

“We sat down and talked, and he asked me a few questions, and he took some Polaroids, and I guess he went back to the men’s board and talked with the other brokers and showed them my pictures,” he says. “He called me back the same day and said, ‘Let’s give it a try.’ I was like, ‘Really?’ He’s like, ‘Yeah.’ Probably about three weeks later, my first job was for L’Oreal, when I made $25,000. I go, ‘Yeah. I’m going to do this.’”

He signed his first modeling contract in his early 50s; the rest is history. Today he’s shot for the biggest names in fashion. It’s hard work, he says — always on call, always on the move. And it’s solitary work, too. On the outside, it appears glamorous, but behind the camera are a lot of plane rides alone, airport coffee, and living out of suitcases. Still, he wouldn’t change it for the world — when David calls, he says, he’s always ready. 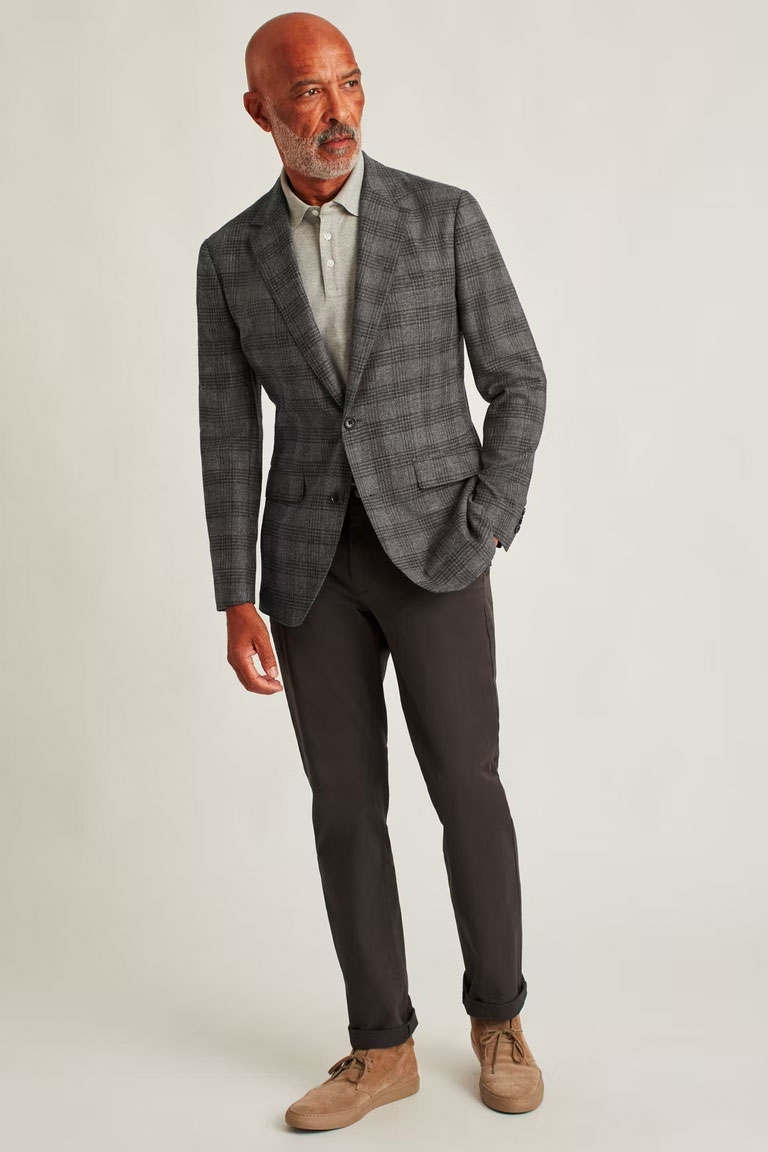 Covid slowed work significantly for him and he took that time to be close to his sons, who are 19 and 25. He moved them and their mom down to Miami, where he lives and says they’ve been able to spend more time together than ever before.

“They’re with me and they help me,” he says. “We started another business; we spent every day together for a year, and that’s never happened. We bonded on a level that is unbelievable.”

He beams talking about his children, and it’s clear that despite all his success, they’re his dearest accomplishment. He says his parenting style involves letting them find their own way but always being ready to help them correct course if they need it. “I get out of their way, I see they’re losing track, I’ll come in and say, ‘Hey. I think you’re off track a little bit here. Pop over here’ and then I’m out of the way again,” he says.

Brazil is back to work these days, but he still makes time for family. He golfs regularly — both in front of the camera and on his own time — though he told me he has to bribe his sons with burgers and chicken wings from Topgolf if he wants them to join him on the course. “We go to Topgolf once a week,” he says.

Brazil opts for an organic diet and eats no processed foods. He doesn’t eat dairy and he’s gluten intolerant; he starts every day with raw organic celery juice and his day-to-day diet consists mainly of raw fruits, fish and veggies. He exercises and stretches every day and credits much of his legendary glow to two things: coconut oil and olive oil. He remarks that he once heard a doctor say that food was created to get olive oil into your system, and he says he uses coconut oil on his skin even in place of aftershave when he shaves his face and head.

He credits his success largely to how he came up in the industry — in music, fashion, and culture. Brazil rose to prominence before the age of social media, and so he filled up his Rolodex of connections before you could slide into someone’s DM’s. You had to show up at the club, you had to be in the recording studio, you had to make a name for yourself on the singularity of your presence alone, and it’s clear in talking to him to see why he made it. Even casually dressed in a red golf shirt and glasses over video chat, Brazil is magnetic. Other industry insiders and agents I spoke with raved about Brazil’s ability to command any room he walks into.

As far as Brazil’s next move? More modeling of course, and work on his record label NITCORE where he makes music under the label Drumpattern. He’s also working on a book that he hopes will give people a glimpse into how he became the renaissance man he is today.

“I believe water seeks its own level,” he says. “I believe if you stay true to who you are, you will rise to that.”

To see more of Brazil’s work, you can follow him on Instagram, or simply keep an eye on your favorite menswear brands.