With Inauguration Day taking place this week, all eyes will not only be on who’s attending Donald Trump’s swearing in ceremony, but also on who – and what – Melania Trump will be wearing. The latest two names confirmed to be interested in dressing the future First Lady: Ralph Lauren and Karl Lagerfeld.

From WWD:
Trump finds herself in a very different position. Despite a client CV of the sort designer houses typically salivate over — beautiful, thin, stylish, rich — within fashion and without, she is a lightening rod of polarity. Though several designers — Tommy Hilfiger, Thom Browne and Carolina Herrera among them — have said they’d be happy to dress her, numerous others have said no, while still more have avoided the question like Donald Trump doesn’t avoid Twitter.

The Lauren-Lagerfeld duet would prove a major coup for Melania Trump. Conversely, for the designers, it’s a risk, as anyone dressing her, for a while at least, will become the object of a two-sided social media storm. Yet given the pair’s stature at fashion’s pinnacle, saying yes to Trump may send a message to less secure designing colleagues, some of whom have prior relationships with her but now fear bottom-line business repercussions. That message: Go with your gut. 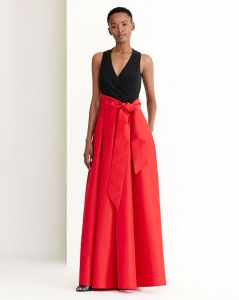 Make an entrance in this sweeping, modern ballgown, with a sleevless top and exaggerated flared silhouette. Was: $280.00 Now: $209.99

Over the years, Lauren has kept his politics private while wearing his patriotism proudly, and at times, expensively, as when he donated $10 million to restore the Star-Spangled Banner. Though he chooses not to endorse candidates, he became Hillary Clinton’s go-to designer throughout the presidential campaign. He has also been a favorite of first ladies on both sides, dressing Obama, Reagan and Betty Ford. History thus suggests that Lauren views dressing the first lady of the United States as an honor, and, if asked to do so, perhaps even a responsibility. Trump, meanwhile, has already displayed her affinity for Lauren’s clothes, choosing his black jumpsuit for the third debate, and for election night, his fluid white jumpsuit that infused elegance with a dose of drama.

Like Lauren, Lagerfeld steers clear of politics, save for when he can’t help himself, as happened years ago when he voiced dismay at France’s then newly applied 35-hour workweek. But then, for him, work is psychological oxygen. Two of his favorite one-liners: “Lots of class but working class,” and, “I don’t make art. I make dresses.” 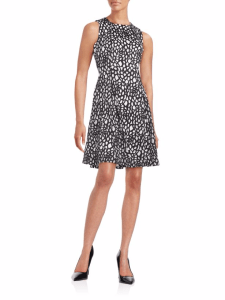 A classy yet contemporary dress featuring a mosaic-inspired, black and white print, with a pleated A-line skirt. Was $138.00 Now: $69.99

Does he ever. Given Lagerfeld’s couture credentials, and the fact that we tend to think of Lauren’s work as the essence of polished sportif, one’s first assumption is that Lauren would design Trump’s day look and Lagerfeld, her gown. But it could go the other way. Lauren is no stranger to big evenings. His collections offer a lovely, extensive range, and he’s had some major red carpet moments.

At the same time, while Lagerfeld is thought to be designing for Trump, the affiliated brand under which he’s doing so is unclear. Though Chanel first comes to mind, he has two other seats of employment, his eponymous brand and Fendi. The latter has deep de facto couture abilities, as witnessed by the otherworldly show he staged in July at the Trevi Fountain in Rome. Meanwhile, last week, his boss there, Bernard Arnault, had a friendly meeting with the president-elect at Trump Tower. While it’s doubtful (but not impossible) that they discussed Trump’s short-term wardrobe, Arnault did express interest in expanding LVMH’s factory presence in the U.S. Currently, the group produces some Louis Vuitton products in California (who knew?), and is considering manufacturing sites in North Carolina and Texas. Might not a dress — particularly a grand evening dress — make a sound first step between friends? 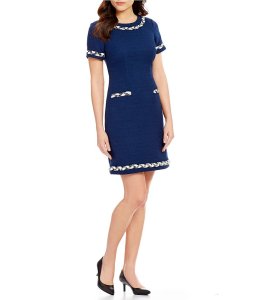 Classic short sleeved shift dress with delicate accents at the neckline, hemline and waist. A season and occasion-appropriate dress. $128.00

Then there’s the designer’s own brand. Across endeavors, Lagerfeld has long shown a strong loyalty to the U.S. and its customer base. He did so through the Chinese explosion when much of international fashion looked at the American market as mature and uninteresting. His joint venture with G-III, under the label Karl Lagerfeld Paris, proves his desire to bring his particular élan to a broader U.S. customer base. In that context, a day look on Trump could make for savvy marketing.

Confirmations? Zippo. Nor are there denials. 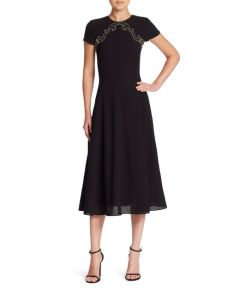 Made with the highest attention to detail and quality in Italy, this A-line wool dress features a flattering fit, silk lining and sophisticated embellishment along the collar. A true statement dress. $2290.00

One thing is certain. On Friday, Trump needs two special outfits, one for day, one for night. Absent credible alternate rumors, and so far, there are none, indications are very strong that she has enlisted Ralph Lauren and Karl Lagerfeld to provide those looks, in one order or the other. Of course, Trump could always change her mind. If that were to happen, she’d have to go to off the rack (again, no indications of custom backup) — and risk alienating two of fashion’s greatest gods. On the front end of the Trump administration, does the woman need another headache? Just sayin’.