Western wear and men’s western boots have been on-trend since last fall. Thing is, you can never go wrong with anything western in your closet, especially boots. Men’s western boots, much like combat boots or sneakers have been a go-to style for guys for years. Yes, you can spend thousands of dollars on a pair of exotic skin cowboy boots, we’re not even going to go there because the essential cowboy boot, or men’s western boot, will not only last forever, but they’ll always look good.

Below, we’ll go back into the history of the boot (it’s pretty cool), the different types of men’s western boots….yep, there’s more than one, and boots that you can wear now and a couple of years from now.

Where Do Men’s Western Boots Come From?

The cowboy boot, or men’s western boot, has an English and Mexican heritage. The boots were modeled on the Wellington or Hessian boots that were lightweight leather riding boots. Variations of that style were worn by the American military even up to and slightly after the Civil War. While the west was slowly being homesteaded, by 1843, a thousand people emigrated along the Oregon Trail. After the Civil War (1861-1865), people heeded the phrase “Go West, Young Man” and did. As the west became populated, those freshly minted cowboys needed boots that could adapt to the rocky, drier climates as well protect them from snakes. These cowboys met the Vaqueros, who had been herding cattle from Mexico through the open territories for a long time. Their clothing, and especially their footwear, were created specifically for their work. The American cowboys took a look at their boots and realized that they needed an upgrade.

The first western boot companies came into being around this time. The two earliest were Justin Boots (1879) and Hyers Brothers Boots (1875), now known as Olathe Boots. Then along came Nocona, Tony Lama, Lucchese and other well-known Western Footwear brands. They artfully combined both styles of boots into one, and the western or cowboy boot was born. Huzzah!

Cowboy boots became part of pop culture the moment the first western movie was born. Once people started seeing them on the big screen, they wanted a pair of their own.

Cowboy boots: The first type of men’s western boots and the most iconic. The silhouette usually has a slanted, stacked one-inch heel called a Cuban heel. The toe can either be pointed or round, and the shaft usually hits mid-calf. The vamp usually has topstitching and/or tooling (an etched design). That tooling and can sometimes be carried up the shaft. Some cowboy boot shafts are heavily embroidered or have fabric inserts.

Roper boots: Roper boot heels and shafts are lower than a cowboy boot. They’re sometimes called the “gentlemen’s cowboy boot,” as they look like a dress shoe.

Harness Boots: In approximately 1860, The Frye Company designed a boot that has a square toe and is highlighted with an ankle strap with metal rings that hugs the bottom of the boot’s shaft and goes over the heel. Named the Harness Boot, they were used by the US Calvary out west.

Those classic styles birthed these modern styles: Western Work Boots, Buckeroo, Stockman, and Fashion. The Western Work or Work Boot looks like many men’s western boots but they have rubber soles, and their insoles are deeply cushioned and have all the bells and whistles you want in a shoe or boot if you’re on your feet all day long. The Buckeroo’s shaft is approximately 14 inches, and the boots’ tops have circular holes in them. The Stockman has a short and wider heel than the classic cowboy boot, and there’s a bigger V or dip in the shaft. The Fashion Boot is festooned and adorned with incredible amounts of sparkles, embroidery, exotic skins and what have you. Think movie star/rodeo star boots and that’s what they look like. Over the top.

How to Wear Cowboy Boots

You can wear cowboy boots with anything. However! If you’re going to wear wool trousers, opt for a sleekly designed, low western boot like a Roper, Western Chelsea or ankle boot, as they’re designed more for office wear.

Git ’em Up! Move ’em Out! Oops….um, scroll on through and check out the best men’s western boots to wear right now.

If you need a boot that looks as comfortable at the Dew Dropp Inn, as some fancy-pants-citified brunch place, say howdy to these boots by Wolverine. They’ve got the classic Roper Boot silhouette, but the stitching and decor are kept at a minimum. They do have an antiqued patina, which gives them an aged, well-loved glow, almost as if you’ve owned them for years. And it’s because of all those things that it makes these boots easy to wear, well, everywhere. Best of all, they come in three shades: brown, tan (shown) and natural. 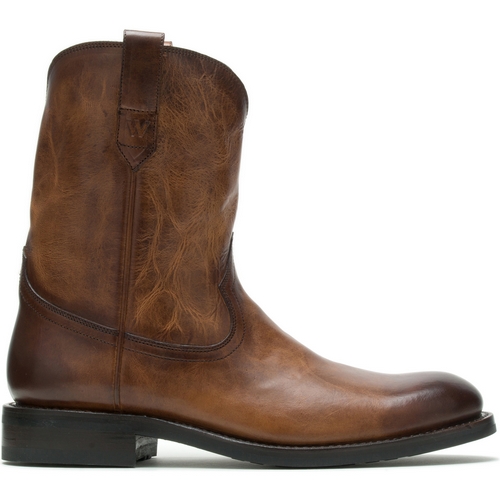 They really don’t look a year over 100, give or take a couple of decades, do they? While the style is based on the original harness boot that was worn by the U.S Calvary, these western boots look pretty cool and modern, too. It’s interesting that some men’s western boot styles, like the harness boot, is also cataloged as one of many motorcycle boot styles. This one is unlined and has a rubber outsole to prevent slippage. 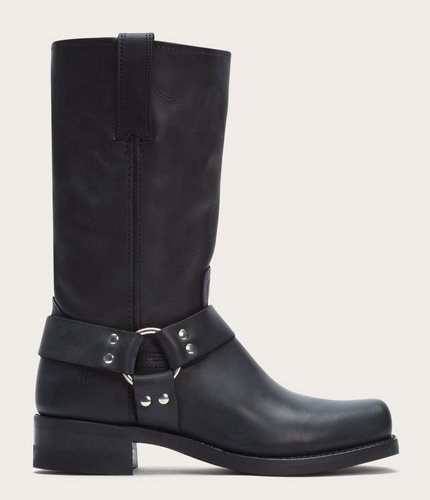 If you’re looking at these men’s western boots and are thinking that they couldn’t be tabbed as belonging to any particular decade, that’s really what you look for when opting for a classic-looking cowboy boot. They could have walked off the set of Urban Cowboy, or a modern-day house in Plano, the rodeo or any other southwestern venue, right? If you’re only going to get one type of men’s western boot, you want one that’ll last and have a timeless appeal like these from Justin Boots. And speaking of Justin Boots, they’re basically the oldest western boot company, so they have loads of experience in making them, and adding the right touches, too. This square-toed cowboy boot has a 13” embroidered shaft. There’s also subtle tonal embroidery on the vamp of the boot, and inside there’s a cushy removable orthotic sole. The neutral nutty-toned leather works with any type of denim you pair them with. 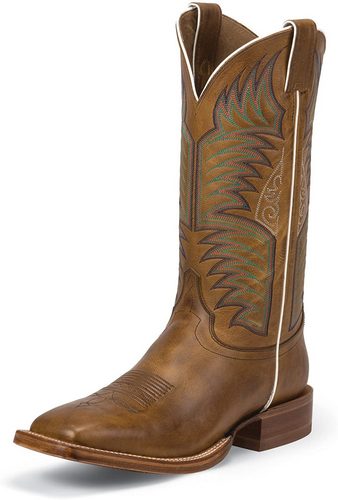 BEST FOR A GOOD TIME

Hey, you can have fun with your footwear, and when you’re talking about men’s western boots, there are lots of guy glitter options out there. Rhinestone bedecked flames lick the heel and toes of these pointy-toed western-style Chelsea boots if you’re off to try some Boot Scootin’ Boogie-ing. And don’t forget to add a couple of fingers of bourbon, too! 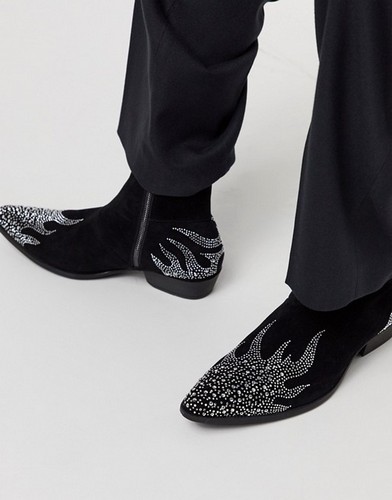 John Varvatos re-invents the harness boot and gives it sleek, refined lines with an edge. He always marries a rock n’ roll vibe (don’t these remind you of the winklepicker boots the Beatles wore in the early 60s?) with clean designs and great tailoring. Whatever he puts his hands on gets turned right up to 11, and we mean that in the best way possible. Good footwear’s an investment, and if you treat these boots right, they’ll give you years of style. The toe area has distressed details, and the back has a pull tab. These low harness boots have a side zip for easy on and off action. 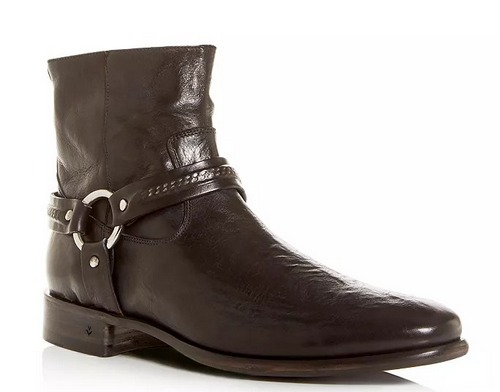 They look snazzy, don’t they? They’ve got that serious western boot vibe, but these babies are made for work. Like, oil rig work. While Ariat is a (more or less) newcomer to the western footwear game, they’ve got a reputation for delivering the goods. And, they have a great warranty on their boots, too. Ariat’s known for using cutting edge technology in their designs. So, even if you’re not working on an oil rig, you’ll appreciate all the smart touches they’ve added to these boots. And if you’re on your feet for hours at a time, or walking miles and miles every day, you may fall in love with them. Why? Because they have ATS Max (Advanced Torque Stability); the boot assists in keeping the body aligned and prevents foot fatigue. It has an EVA midsole that absorbs shock, an Energy Max rebound foam insole, and a Duratread outsole that’s oil and slip-resistant. Talk about serious comfort. It also comes in five other colorways. 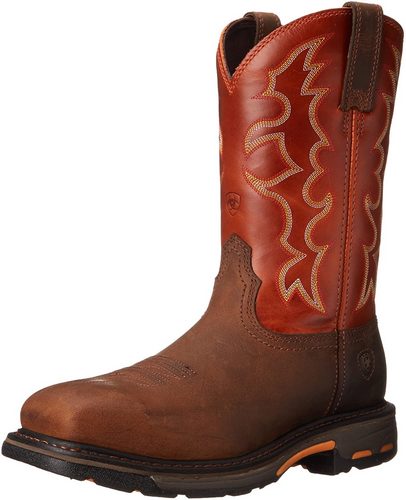 San Antonio-based Lucchese Boots has been creating western boots since 1883. Their first big customer was the US army. John Wayne and James Garner are just two of many celebrities who’ve worn their boots. Their Livingston is a square-toed suede boot that has a stonewashed finished look. Devoid of ornamentation, this boot is urbane and slick. It has a 13″ shaft,  1.5″ stacked Cuban heel and is made by hand. It comes in four other modern hues like olive, rust, cognac and tan. 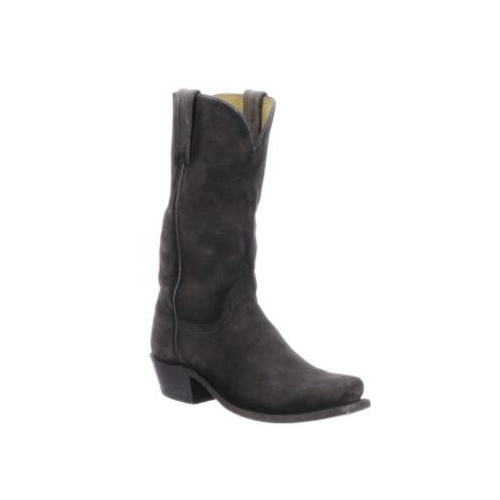 California-based Mike Amiri Pusa composed and produced music before getting into fashion. Launching his line in 2014, he was nominated for a CFDA award in 2018 and now has a huge celebrity fan base/clientele that includes Justin Bieber, Chris Matthews and Gigi Hadid to name a few. You can find his sneakers, shoes, and clothes in luxury stores worldwide. This suede short boot is only missing a guitar to complete its rock n’ roll vibe. The shaft is crisscrossed with bandana straps and a wide silvery Cuban chain. 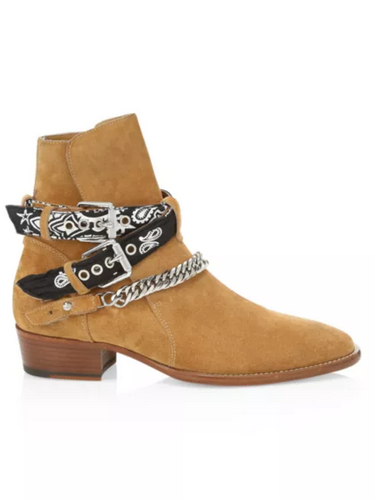 These faux-suede western-styled Chelsea boots have details that make them look more expensive than they are. That’s one of the many reasons we’ll keep shopping at ASOS. There’s the perforated trim that snakes down the boot, the tiny pull tab at the back (normally only seen on pricier boots) and these boots have been aged or weathered with touches of black across the front and back. This western boot sits on a stacked Cuban heel. 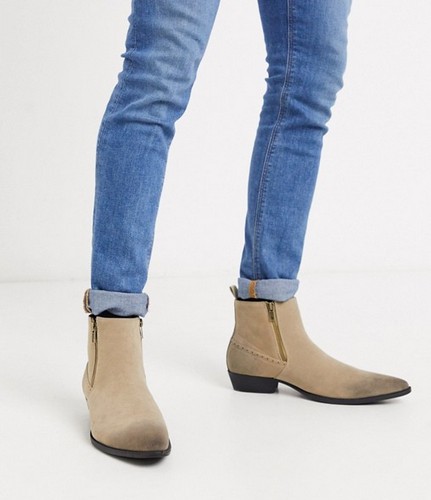 Tecovas is one of the newest western boot companies out there. Created in 2015 by a western boot enthusiast who was tired of paying $500 and up for western boots, he decided to create western boots that were made from high-quality materials while utilizing skilled craftsmen. There are 200 steps to make a single pair of boots. Made from silky soft calfskin, this modern boot is unadorned, making it easy to pair with either jeans or work trousers. It has a slimly cut 8″ shaft, a side zipper and a round toe. These are luxury boots at an affordable price. They also come in burgundy and tan. 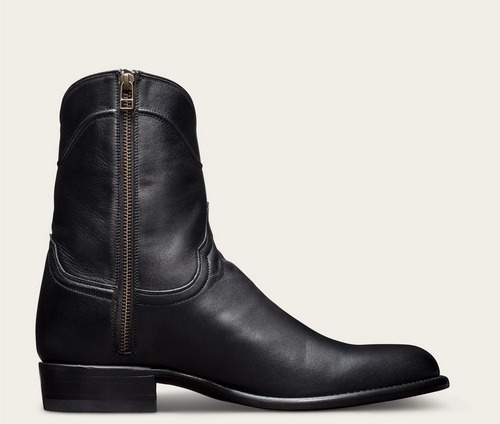 Courtesy of Tecovas
Buy: Tecovas The Dean Boot $255.00
Buy It

The Best Denim Jackets for Men to Rock in 2020