Michael Kors understands chic more than most, but the brand also knows the need for utility. That much is clear when you take an extended look at their Jet Set Painterly Camo Billfold Wallet, a compact constellation of style, pragmatism and security.

Featuring painterly strokes of evergreen camo, this variation of Michael Kors’ Jet Set Billfold looks like it belongs in an art gallery instead of your pocket—which it can easily slip into. As a piece from Michael Kors’ travel-centric “Jet Set” line, the Camo Billfold Wallet was created with the polish of an experienced fashion designer and the sinewy strength to self-preserve itself from the rigors of life in the big city, where you’re always on the go. 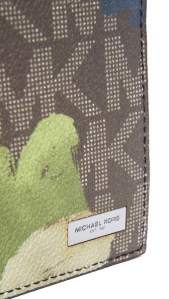 Combining beauty with the toughness of the concrete jungle, the Jet Set Painterly Camo Billfold Wallet adds an urban flair to your style without compromising convenience – or your information.