* Why are these the best underwear he has ever worn?
* Boxer briefs with breathability and no-bunch
* MyPakage makes men’s underwear that just makes sense

Chatting about your underwear is not the most typical dinner table talk, but when I asked my friends about any breakthrough products they have recently tried, my guy friend made it a point to share his experience with these boxer briefs. His key points were that they were breathable in the Los Angeles heat, held up while walking the dog on humid days and didn’t bunch up after a long day of wear—eliminating any embarrassment when de-robing in front of his partner. MyPakage boxer briefs are made from Modal, a semi-synthetic material made from Beech trees and 5% spandex for extra stretch in the design. They also have an integrated material that wicks away moisture away from your body, which is a necessity for everyday wear and normal amounts of perspiration as well as days spent at the gym or working outside for long hours.

This particular guy I spoke with had a lot to say about the underwear including, “I’m a boxer-briefs guy, I can’t wear any other type of boxers. The problem is that the legs would always stretch out over the course of the day which inevitably led to the boxers bunching up. By the time night-time hit, I wouldn’t want to show anyone the underwear I’m wearing. These boxer-briefs stay in place all day long and the material is breathable so they stay fresher longer.” He also mentioned the elastic waistband, which is comfortable and form-fitting while the front of the briefs are roomy, without constriction. One of the mentioned features of the boxers is that they have multiple key and media pockets for stashing small items while on-the-go. This user has not utilized them yet but said it is nice to know they are there for days when you might hit the trailhead without a wallet or backpack and need to store your valuables in a discreet place.

For someone who has been wearing briefs for most of his life, he commented that underwear technology has not necessarily seen any breakthroughs in design until he tried these on. He made it a point to tell us that he won’t be switching anytime soon and because the price point is reasonable, there is no way he is going to go back to previous brands that left him sweaty (down there) and with bunched up briefs after hours of use. Their variety of underwear ranges in price from around $10.00 and up to about $35.00, depending on style and materials used. Overall, they seem to have a growing fan club and a design that truly holds up to the competition.

I will leave you with my friends’ final remarks, “when you’ve had the best, you can’t go back. I don’t want to compromise during the other days of the week now. And you never know when you might need to show them off.” 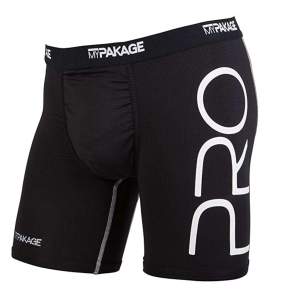