Nicki Minaj may have name-checked Giuseppe Zanotti in her songs and interviews, but it seems the legendary shoe designer isn’t checking for her. The rapper called out Zanotti in a series of social media posts this week for releasing a collection of shoes that she says, was inspired by her.

From WWD:
Nicki Minaj is none too happy with Giuseppe Zanotti. After the brand unveiled a new shoe design Friday morning, Minaj took to social media to say she deserves credit for having inspired some of the brand’s shoes. 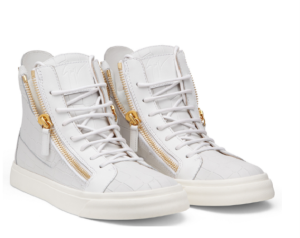 Giuseppe Zanotti shared a photo of its latest design, called The Cooper, on Instagram. Minaj seemingly caught wind of the post, which prompted the following response from her: “Dear @giuseppezanottidesign #RunMeMyCHECK your PR must’ve fell & bumped their head when they told my agency they weren’t discussing anything with us. I’m giving you 24 hours. #GiuseppeWhatsGood” 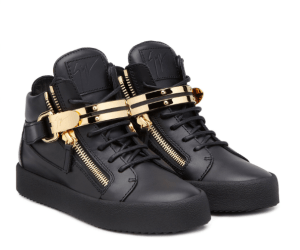 “I met #GiuseppeZanotti years ago. At which time, he told me I inspired him to design a sneaker in my honor. Wore them on the cover of Cosmo,” Minaj wrote in one. She asserted that his agency told hers that they weren’t taking her calls and asked her followers to Google the “different pairs he’s named after me.” She also seemed to want to know why a formal collection wasn’t made in her honor. 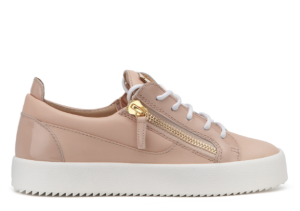 Metallic gold hardware and a jagged sole on these leather low-tops offer a cool textural contrast, while the blush pink colorway is a chic upgrade from basic white.

“The racism & disrespect won’t b tolerated,” she continued, asking her fanbase to send the hashtags #RunMeMyCHECK and #GiuseppeWhatsGood trending. She clarified in a later tweet that it wasn’t about money, but the “disrespect.”

Zanotti shoes are frequent subjects of Minaj’s raps. Most recently, the brand launched a Giuseppe for Jennifer Lopez collection, and in the past, have released collaborations with Zayn Malik and G-Dragon.