Virgil Abloh’s Off White x Nike Air Jordans collaboration drops on Saturday, February 15 at 8:00 am. Like a lot of highly anticipated Nike sneakers, they will likely sell out in short order. If you’re a sneakerhead who lives for new Air Jordan sneakers designed by one of the world’s top street fashion designers, then these sneakers absolutely belong in your collection.

In case you’re not already familiar, Virgil Abloh was Kanye West’s creative director and has since made quite a splash in the fashion world with his streetwear company Off-White. Since branching off with his own creative project, he has played with the shades of grey within street fashion, design and prescriptive gender looks. In March of 2018 he was promoted yet again with a nod from Louis Vuitton, becoming the iconic fashion house’s artistic director of menswear.

This collaboration could not be timed more perfectly, with the NBA All-Star weekend happening in Chicago at the very same time. Abloh is from the Windy City, where he began working with Kanye West. We hope we don’t need to remind you of the connection between Michael Jordan and Chi Town. In addition to these sneakers, Off-White and Nike have also collaborated on a new line of athletic gear, which was officially released on February 6.

The Off-White Air Jordans feature a Black Metallic color scheme as a base. Off-White’s signature text can be seen on the side panel with details about the production specs. They uphold tradition with Michael Jordan’s silhouette on the tongues and the number 23 emblazoned on the outside heel of the shoe. 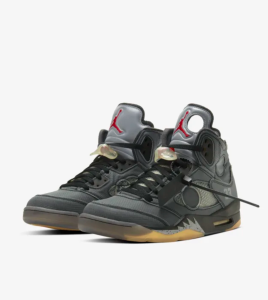 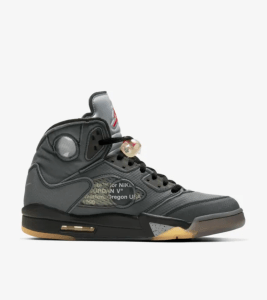 After stepping onto the court in 1985 wearing the original Air Jordans, Michael Jordan broke new ground in basketball. Of course, these iconic sneakers have evolved in the decades since, and now Abloh is bringing his deconstructed design approach to this collaboration. The shoelaces feature the word “Shoelaces” with Off-White’s signature quotation marks. The Off-White Air Jordans also have cutouts, translucent elements and layered textiles. They serve to reveal the shoes’ inner workings and give the wearer a brand new perspective.

While Abloh has deconstructed the classic Air Jordan design, these shoes are still very recognizably Air Jordan sneakers. With New York Fashion Week drawing to a close and the NBA All-Star Game getting ready to start, this is the perfect time for a high fashion collaboration.

Sneakerheads can get these shoes — if they don’t sell out first — on Saturday, February 15.