Just in time for the conference finals match up between the San Antonio Spurs and The Warriors this Saturday, Nike has released a first glimpse at Warriors forward Kevin Durant’s highly-anticipated KD10 sneakers. The latest KD drop celebrates Durant’s ten year anniversary with Nike, reflecting his journey and evolution with Nike and his NBA career. Nike signed a deal with Durant for his first signature shoe ten years ago this month. 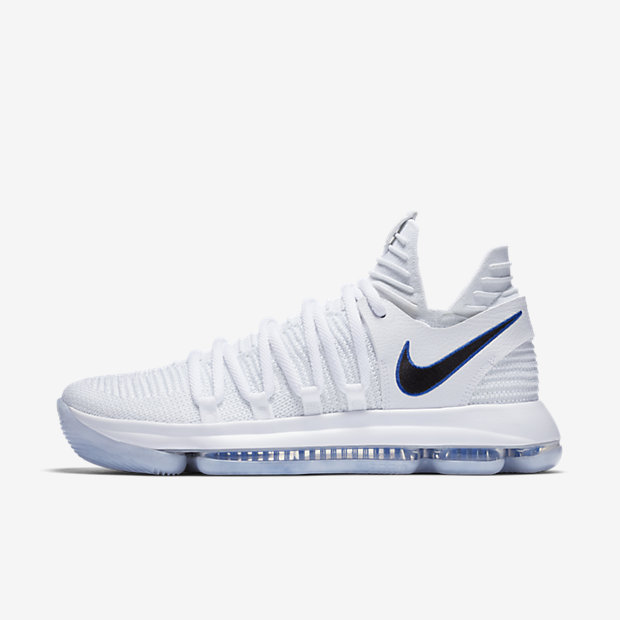 In a news release, Nike debuted several images of the shoe, along with a video campaign. Durant’s KD10 is a high-performance meets lifestyle basketball sneaker featuring Nike’s beloved flyknit technology.

“I got a pair of the Flyknit Racer during the 2012 games in London and immediately loved them. That shoe is so stylish, so innovative and so comfortable. I’ve been asking for Flyknit in my shoe and the KD10 is my best shoe yet,” Durant says in the news release.

Nike — and Durant — claim that the KD10 is the most innovative example of flyknit applied to a basketball shoe to date. Nike’s head designer Leo Chang and his engineers constructed the shoes with attention to balance, blending high and low stretch yearn for movement with rigid support of a basketball shoe, culminating with a “sock-like hug.”

The first iteration of the KD10 Anniversary shoe, The Swoosh, features a blue color scheme symbolizing Durant’s history of team colors from his college days until his current stint with the Warriors. The Swoosh drops May 25th. The KD10 Still — the all-white version of the anniversary shoe — will make its debut on June 1st.