If you have not heard of the jewelry and lifestyle company The Giving Keys yet, you may have been hiding under a rock. With 10 years of business under their belt, The Giving Keys has racked up heavy support from celebrities like Ryan Gosling, Janet Jackson, Harry Styles and more, as well as thousands of other supporters who want to help pay it forward for those who need it the most.

The Giving Keys has a mission, and it’s one you’ll want to get behind if you have not yet. Their motto and mission is based around the idea of “paying it forward,” and with every purchase made from their company (think stylish necklaces and accessories), you’re helping to create job opportunities for those transitioning out of homelessness. So far, the company has logged 131,163 hours of work to their employees thanks to everyone who has bought something.

Use Promo Code Giving20 To Get 20% Off The Giving Keys

The Giving Keys started out as a jewelry company, focused on keys that have words engraved into them. Since then, it has grown to be bigger, better and even more stylish than it already was. Their pieces are affordable and are not just necklaces either. The brand has now expanded to include earrings, bracelets, graphic tees, key chains and, according to the founders, “so much more to come.”

We got a chance to visit The Giving Keys’ downtown Los Angeles studio, where we met the founder, Caitlin Crosby, and the president, Brit Gilmore, to learn more about their journey that brought them from casual friends in the entertainment industry to business partners (and #GirlsBosses) helping others’ starting their own journeys too. 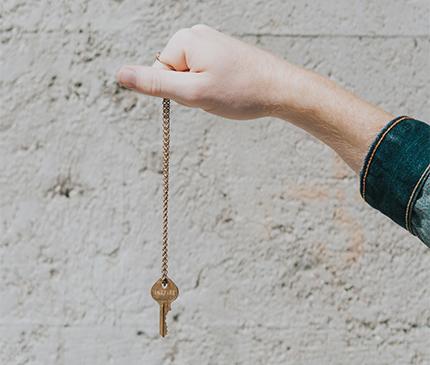 Can you tell us more about where you both were before The Giving Keys?

Caitlin Crosby: I grew up acting and doing music; singer-songwriter touring and then I started a website called http://www.loveyourflawz.com, with the actress Brie Larson, and then touring led to making the keys and selling the keys which started with just one saying and then eventually grew to be more sayings and then the company.

Brit Gilmore: I grew up in Detroit and went to fashion school out there and got my degree in fashion design. I did my own line for a little bit called “B. Moore.” And then I quickly realized…that I wanted to do more on the business side of fashion, so I ended up getting a scholarship to FIDM’s year long program. During that time I worked a lot of retail-related jobs like managing clothing stores, visual merchandising for Club Monaco and some celebrity styling.

BG: Yeah I worked on [Beyonce’s] Who Run The World (Girls) music video. That was definitely one of the moments, like those “only in LA” kind of life experiences that happen.

So, how did the name “The Giving Keys” come to be?

CC: When I was just selling these keys on tour, I didn’t have a name for them so on my computer I still have a folder called “CC’s Keys.” But I knew that that was not a good name, so then The Giving Keys came about because I always loved the book “The Giving Tree.”

I always loved the story and the heart behind it and I feel like it really made me into who I am today. We’re in the process of figuring out what to call our customers or “tribe” even though we don’t call it that. They are a “key” in and of themselves because we feel maybe flawed, used, cracked or have been through a lot. 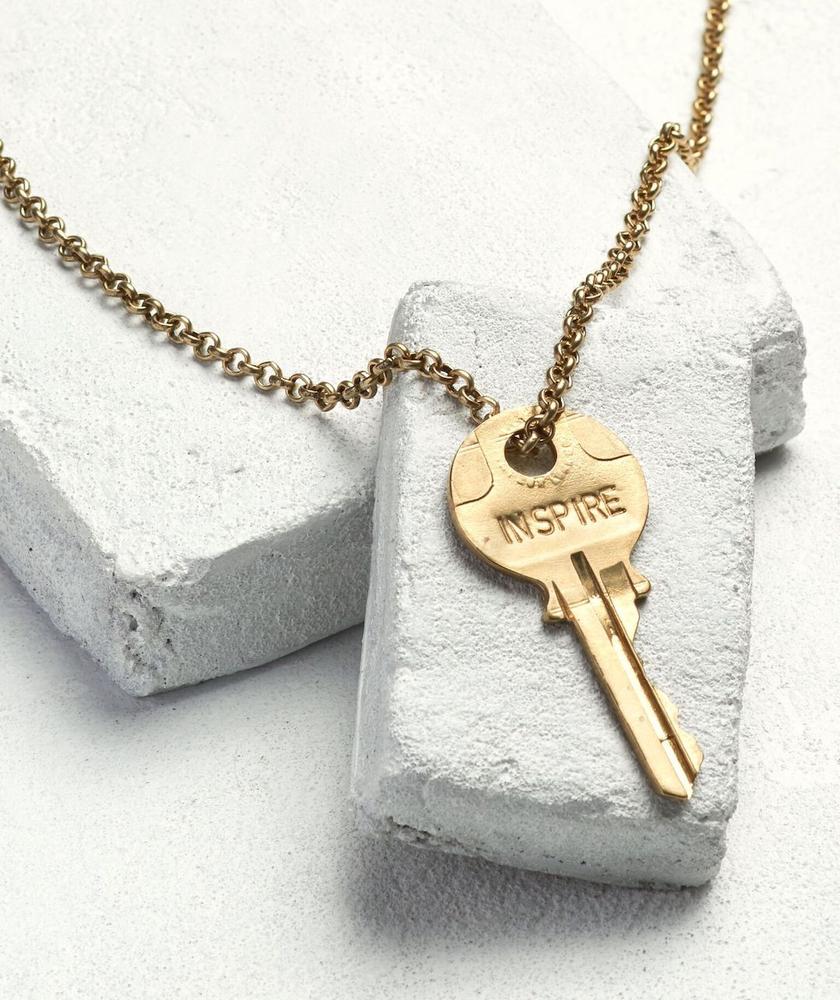 These keys have stories behind them and are used as words of positivity, strength, hope, love, life and light and should be passed on to be used as inspiration for other people that they can also make it through and keep going.

You released a line of awesome T-shirts that touch on love and unity – how did you come up with these designs?

CC: We did this collaboration with Known Supply who have a goal of humanizing the apparel industry and really shining light on the people making the clothes that sometimes goes unnoticed.

As far as design, we really want all of our products to spread inspiration and positivity, so we went with the words “unity” in a bunch of different languages and colors, especially with everything that’s going on in the world right now, we’re really excited because this is kind of the perfect time for our brand because people have a lot to say and we have a lot to say and it’s cool to see people coming together in that way.

Caitlin, you started this company because of the dramatic amount of homelessness here in your hometown of Los Angeles. Was there any significant moment that stood out for you that made you want create a business to help homeless men and women?

CC: It really was an accumulation of an entire life living [in LA]. Homelessness was just one of the issues. I met this couple, I took them to dinner, which I did a lot, and I already had The Giving Keys website and I knew I wanted it to be nonprofit-esque. And then the “ah-ha” moment was when the woman told me she loved making jewelry.

I asked them to come work for me and then I started paying them to make the keys instead of a locksmith. Eventually they saved enough money to stay in a motel and eventually their own apartment. When I met them they lived in a cardboard box in a dumpster. It was then that I realized it was a really stable way to actually change people’s lives.

There’s a certain perception of homeless people – they’re mentally ill, they’ll never get back on track, etc. – but how are you guys helping to change this perception?

BG: The stigma around homelessness is greatly associated with substance abuse or mental illness, but it’s simply not true. A woman who came to work for us didn’t have a criminal or drug history. Her daughter fell and hurt her back and the expenses were so significant that it made it impossible for her to stay housed. Another guy worked for JP Morgan and got cut and didn’t have a back up plan and he wasn’t left with much.

The face of homelessness is so varied and so unique and so different and it’s really dangerous to only see people through one lens. I think we should support our homeless neighbors – even though they don’t have a roof over their head, they’re still living in the same area you are. 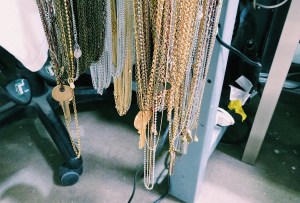 Brit, you’re president of the company. How did you get involved with The Giving Keys?

BG: We met through a mutual friend out in Hollywood one night.

CC: She was a really good dancer.

BG: She shared with me what she was doing with The Giving Keys and I loved the concept. I knew I wanted to end up in a space where fashion and impact or philanthropy merged. I told her I just wanted to support however I could, if that meant coming down to the office and volunteering some time or whatever she needed.

We stayed connected for a few months and then her production manager put in her notice, and it just so happened that I got a text from Caitlin the same day my employer laid off half of the staff. I said “let’s talk” and then I started the next week.

What has been the most challenging thing about owning a business like this?

CC: The first thing that pops into my head is at the end of the day this started to help people both emotionally with the words on the keys and get people off the streets. So that being the main reason this business exists; now running a business which is often times focused around making money…there are some things that we can’t afford.

We’ve done a lot of things to really try and honor the mission whether it be health benefits, paying LA living wage, spending time trying to find holistic support for people, instead of spending time and money, just to make money. It’s not even a question about doing it, but it’s a challenge. We have to work harder.

BG: It’s actually much more challenging to start a business like this because you have to deal with these trade-offs. Definitely balancing the trade-offs between mission and making money is challenging. 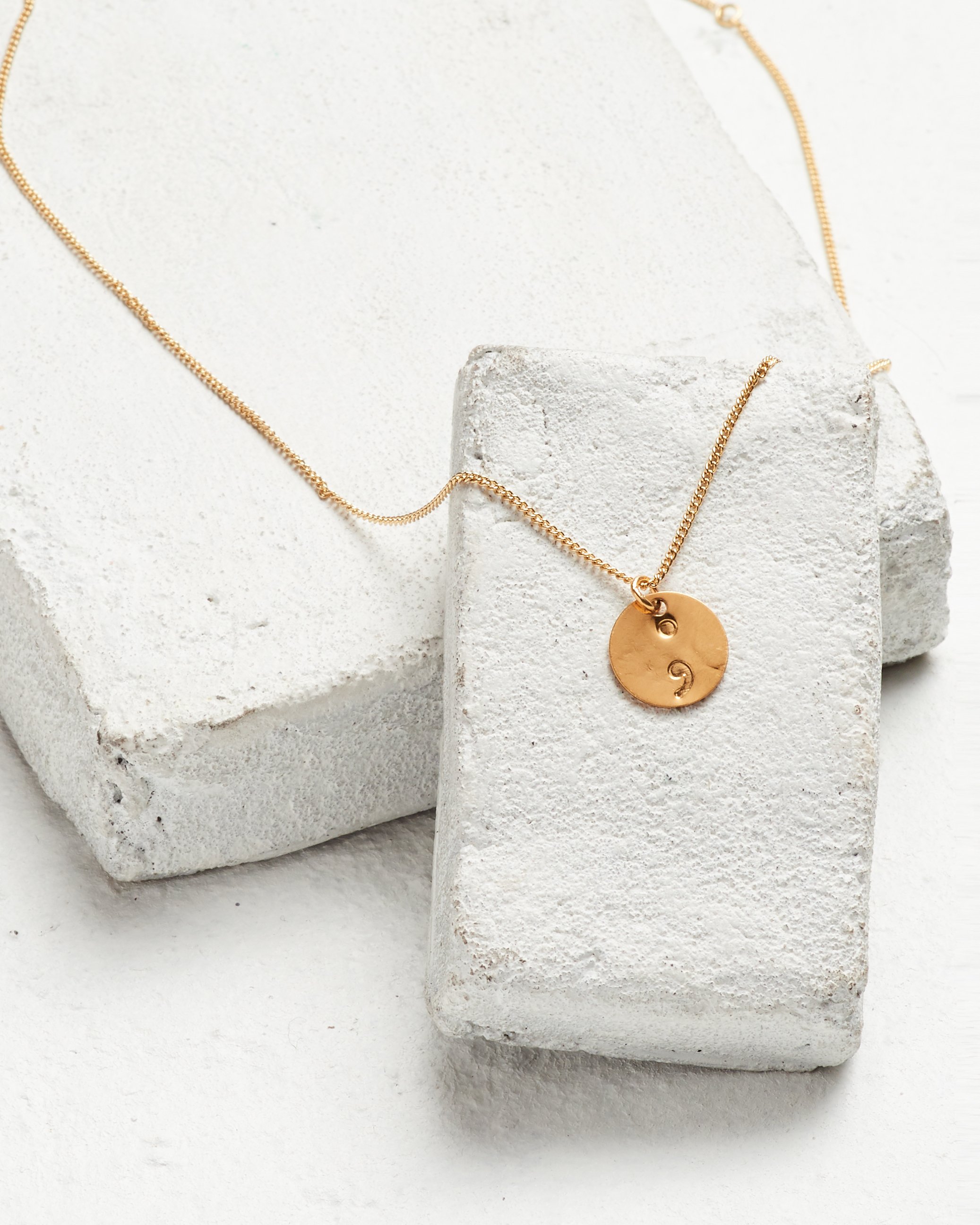 What are both of your favorite pieces from your Giving Keys collections? My favorite is the mini key choker, and I see you’re wearing it, Caitlin!

CC: Yeah, I think this is my favorite right now, too!

BG: I have really been loving our semicolon disc. We did it a while ago and then brought it back after the heartbreaking news about Kate Spade and Anthony Bourdain and the overall increased rates of suicide. So the Semicolon Project is a nonprofit that has taken the semicolon symbol and turned it into this message that your story isn’t over. I think mental health is such an important conversation to be having right now. It’s been a really meaningful symbol to me.

Lastly, what can we expect in the future from The Giving Keys?

CC: Lots of new products! New categories of products; the T-shirts have done really well so we want to keep pumping out some cool new designs on that front. New jewelry designs too – we’re opening our first jewelry store [in downtown LA], our flagship store, and it will open next month! I’m excited about having new, creative ways to display our messages. Different styles of jewelry, and also not only T-shirts but jean jackets and leather jackets… Basically having a full, robust lifestyle line.

Check out some of The Giving Keys pieces on Amazon or on their website, www.thegivingkeys.com, where you can use the code Giving20 for 20% off your purchase courtesy of everyone at The Giving Keys.