* Vivienne Westwood and Maison Simons relaunch “Save the Arctic” T-Shirt
* T-shirt was originally part of campaign with Greenpeace, launched in 2014
*  Relaunch celebrated at Eco-Fashion Week in Vancouver with guest speaker Pamela Anderson

Eco Fashion week wrapped up earlier in the month, but in honor of Earth Day over the weekend, Vivienne Westwood partnered with Maison Simons to re-launch their famous “Save The Arctic,” T-shirt to raise awareness “for the protection of the unique and now fragile Arctic,” and speak out about the dangers of climate change on behalf of the Greenpeace campaign.

As an extension of Eco Fashion week, an event was also held this past weekend in honor of Earth Day and to celebrate Westwood and Simon’s T-shirts. Activist-actress Pamela Anderson starred in Westwood’s original Save the Arctic campaign back in 2014, and is back as the face of Westwood’s renewed campaign. Anderson, a long-time animal rights and environmental activist, spoke at the event, asking her audience to find “the courage to speak up and take action.” 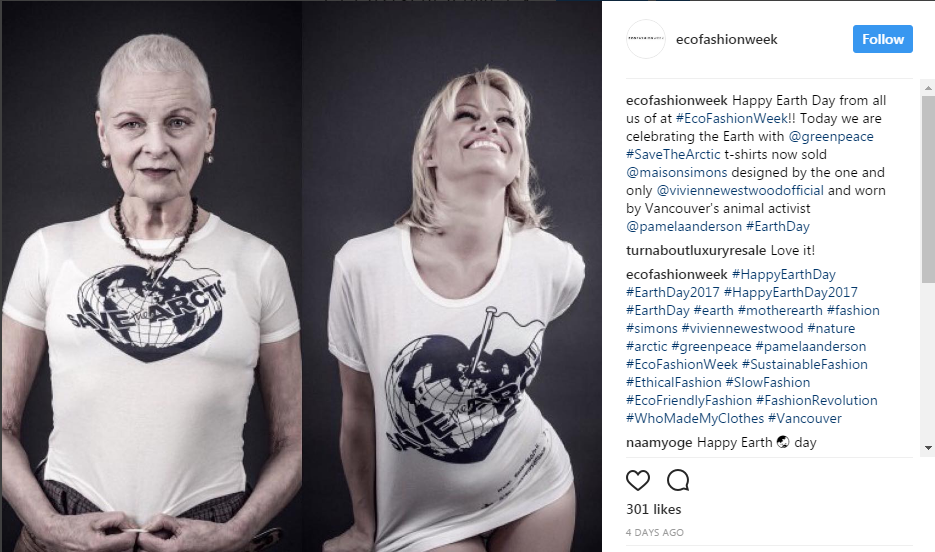 In 2015, Westwood launched a successful campaign partnering with Greenpeace to promote their ] Save the Arctic exhibition held at England’s Waterloo Station. The successful exhibition was dedicated to bringing light to the issue of climate change. The exhibition included over 60 fine photographic prints featuring numerous celebrities, fashion designers and models wearing the designer’s now iconic T-shirt in the photos. Some of the celebrities who posed for the cause included George Clooney, Stella McCartney, Naomi Campbell, Ozzy Osbourne and Pierce Brosnan, among many others.

Now, Anderson seems to be the star of the renewed campaign. Anderson was also the face of Vivienne Westwood’s Spring/Summer 2017 ready-to-wear campaign earlier in the year. Anderson described the S/S 2017 imagery as “apocalyptic,” perhaps as a way of presenting a mirroring message to correspond with her Save the Arctic involvement.

The fashion industry is the second largest source of pollution in the world, but Simons and Westwood are part of a growing movement to change the way we think about eco-friendly fashion. All funds from sales of the shirt will go directly to Greenpeace.