Two esteemed Smiths are uniting to give sneakerheads a little something special for the fall season. After meeting for the first time earlier this year, Paul Smith and Stan Smith are teaming up for a limited-edition version of the iconic Stan Smith tennis shoe silhouette.

With just 1,946 pairs obtainable in this release, the duo is joining forces with Adidas and Manchester United — a professional soccer club in England — to offer a slight update to the beloved white sneaker. Such a specific number, right? Interestingly enough, they landed on this figure because it represents the year of both of them were born.

Staying true to the minimal design the shoes have become famous for since originally hitting shelves in 1965, Stan felt it necessary to keep the overall sneaker design untouched for his collaboration release with Paul.

“The thing was, don’t rock the boat,” he explained in a joint interview with Hypebeast. “The actual shoe is fantastic, it’s really stood the test of time. So the idea was really just to keep it simple.” 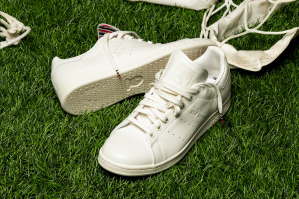 Stan, a Grand-Slam winning tennis champion, established a working rapport with Adidas that spans 50 years, while the relationship between Paul and Manchester United dates back a decade and a half ago. The British fashion brand began to outfit the football club’s players in customized suits, shoes, shirts and ties before their matches. Today, Paul’s namesake label still lends designs to the team, but has traded in the formal wardrobe for a more relaxed apparel in light of the pandemic.

“We’ve all changed the way we dress since Covid, a lot of people were working from home, and so dressing more casually,” Paul said. “So we decided with the Manchester United team to soften up the clothes we were doing for them. It’s a bit more like a T-shirt and zip jacket, a softer look.” In tandem with the new way he styles for the players comes the Smith + Smith sneaker collaboration, which features portraits of Messrs Smith on the tongues.

An official date for the sneaker launch has yet to be confirmed. However, if you wish to be one of the first to learn about the Smith + Smith sneaker drop date, sign up for the newsletter on Paul Smith’s UK site.