These Ray-Ban sunglasses are a re-release of a true classic and there’s no better time to pick up a pair to own yourself.

The Ray-Ban Outdoorsman II has the iconic aviator shape and is one of the 20th-century’s best-loved designs in eyewear. Ray-Ban is probably the most famous name in sunglasses worldwide, thanks to their big screen fame dating back to the middle of the century, with such iconic set pieces as Audrey Hepburn’s Wayfarers in Breakfast at Tiffany’s and of course the aviators popularized by General Douglas MacArthur and countless Hollywood celebrities since, from Peter Fonda to Tom Cruise, Michael Jackson and Madonna.

Ray-Ban aviators originated as practical eyewear for pilots; their classic green or yellow-tinted Kalichrome lenses were developed in the 1930s to sharpen vision and cut glare for pilots in the rapidly changing world of high performance aviation. The Ray Ban Shooter was released commercially in 1938 and aimed at outdoor sports enthusiasts. Thanks to its great optics and beautiful, clean design, it quickly caught on. 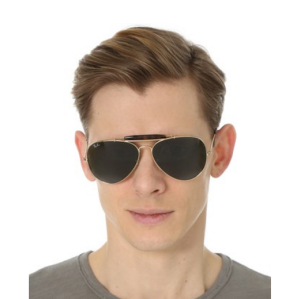 With the addition of the middle bar or “cigarette holder,” the “Outdoorsman” model was born. The Outdoorsman II has since attained legendary status and their appeal continues in the 21st century as they grace the small and large screens alike, with center-stage appearances on AMC’s Mad Men and more. The Outdoorsman II works especially well with collared shirts, with bomber jackets – naturally – and with pea coats.

Part of the enduring genius of Ray-Ban’s aviator design is that it goes well with almost any outfit, whether you’re headed to the beach, the golf course or the office. The Outdoorsman II features rich tortoiseshell frames and high quality UV-protective glare-reducing lenses. There’s also a hard snap case and cleaning cloth included.