The best boots for men are going to vary from season to season. The pair that makes the most sense to don during the summer or spring isn’t going to fly when there’s a foot of snow on the ground and vice versa. The pair you strap on before heading into the office isn’t necessarily going to travel well, and the boots you hit the hiking trails with are probably not going to work in that fancy restaurant for date night. However, there are some boots out there that can do both, ones that are stylish and rugged, heavy duty and complimentary at the same time. One brand that has a foot solidly in both camps? Red Wing, the famous small-town Minnesota boot company that practically screams “Midwestern tough” with every lace up.

Red Wing boots are stylish, made for the cold weather, can be rocked when it’s sunny out and are made to last. Seriously, if you treat these boots right, they’ll look close to brand new for your entire life, and will last through generations of wear. You’ll pay a little more up front than you do with other brands, but then you’ll have a pair for years to come. As we head into the colder seasons, it’s time to get out your wardrobe for battling the elements. We’ve gathered our favorite Red Wing Heritage boots for rocking this fall, winter and beyond. 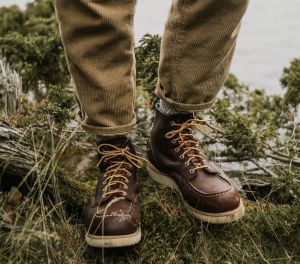 How to Break in Red Wing Boots

Red Wing boots are infamously hard to break in, and hard to size correctly. Pay close attention to the size guide on their website, as your regular shoe size could very well not be your Red Wing shoe size. We’re also not going to sugar coat it, breaking in a pair of Red Wing boots takes more time and effort than it does with other brands, they’re almost designed this way. Most pairs should take about a week of consistent use to mold properly to your foot, although some may take longer.

Satchel B. Moore, Red Wing’s Community Manager offered a few tips to AskMen about breaking in Red Wing boots effectively, so you’ll have a properly fitted pair for the rest of your life. Here’s what he recommended:

Red Wing specializes in boots, with their Heritage and Work lines. Today, we’re going to focus on the Heritage line, but there are many great work boots out there worth checking out, if that’s what you’re looking for. There are also many distinct designs within the Red Wing family that differ slightly in terms of cut, fit and suggested environment. Some are made for rougher conditions than others, some are more stylish than others. We’ve highlighted the aptitudes for each of the pairs below, but know that all of them are superb quality and made to last a lifetime.

This is one of their top-rated designs, and one of the most famous Red Wing Heritage pairs. The moc toe is synonymous with the brand’s classic look, and the Traction Tred outsole is made tough, elevated and creates a silhouette that sets the tone for the entire brand’s reputation. This pair was first made in Red Wing in 1952, and has since grown to be a favorite of farm and factory workers. Theyr’e rugged enough to wear in nearly any conditions, and stylish enough to pair with jeans, shorts and other casual wear during the fall and winter. 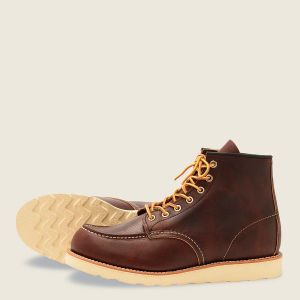 You’ve seen a Chelsea boot before, but nobody makes one like Red Wing does. This is a great starter boot for those new to the brand, as it’s a style and fit you’re familiar with, but more than likely a higher quality version of boots you already have. The pull-on silhouette is made to fit like a glove, and it’s got the same Traction Tred outsole as the Moc boots above, so you’ve still got a good amount of grip on the ground. These are made with Amber Harness Leather, and come in three other complimentary colors. 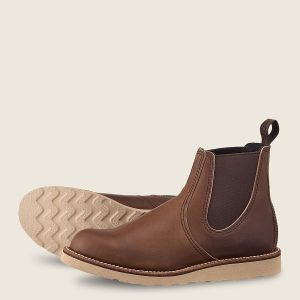 The Iron Ranger boot design was originally made for iron miners in the 1930’s, and has since become the go-to boot for those from all walks of life, rugged and less so. The six-inch boot is a great height for coverage and mobility, and the leather toe cap is both durable and distinctive. The leather insoles and cork midsoles are made to form to your feet, and the Puritan triple-stitch construction and brass speed lace hooks give it longevity. It comes in five different colors, including this Amber Harness Leather. 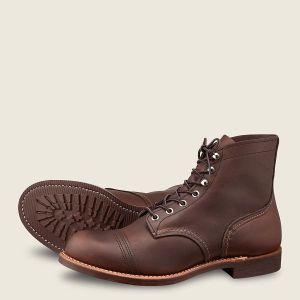 If you’re looking for a boot you can wear most days out of the year, this Blacksmith boot is super wearable and versatile. It’s got a smooth toe that’ll feel very familiar if you’re a frequent boot wearer, and the solid brass eyelets make lacing easy and durable. The sturdy Copper Rough & Tough Leather is made to lock out snow in the winter and dirt in the summer. These boots also have a three-quarter Goodyear welt,  as well as Puritan triple stitch sit on the Vibram 430 Mini-lug outsole, that give you all-season traction and the grip you need for year round confidence. 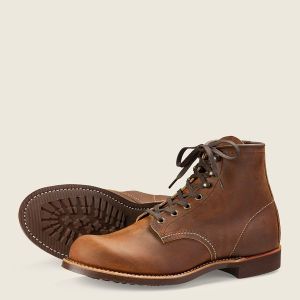 These low-cut Chukka boots are perfect if you’re in the market for something right at the ankle, and also want a boot that’s rugged but not too warming, if you live in an already warm climate. The Atlas Tread outsole creates a unique silhouette that’ll stand out paired with jeans and a button-up, and the intricate stitching across the whole exterior adds an upscale touch to the workmen boot. This boot is great for bending and kneeling, as the outsole is more flexible than other Red Wing designs, and they’re overall more comfortable to wear. 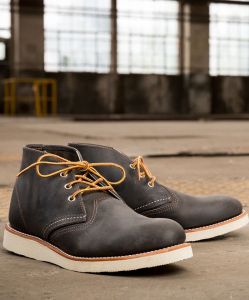 Coming from Minnesota, nearly any pair in Red Wing’s boot line will do fine in winter, but the Sawmill boots are built to withstand the cold. They step up the durable, rugged leather Red Wing design and boast water resistance, built-in warmth and traction for staying steady on the icy streets. They’ve got a felt wool footbed for keeping your toes warm, and there’s a storm welt for added resistance. They’ve also got a deerskin collar for added comfort on those sub-zero days. 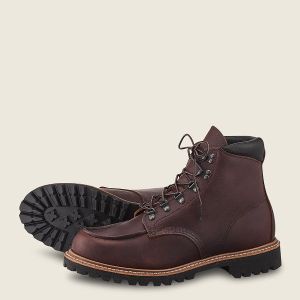 If you’re looking for a pair of shoes, rather than boots, Red Wing has a few select pairs they specialize in. These Postman Oxfords were first made in 1954, and were standard issue by the government for mail carriers and police officers for decades. Cool, huh? Straight out of a Norman Rockwell painting. These shoes are still American-made, like everything Red Wing produces, and have Goodyear welt construction as well as a Black Cushion Crepe Wedge outsole and “sweat-proof” leather insole for all-day comfort. 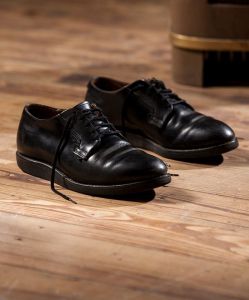