Say what you will about the actual fight between Mayweather and McGregor but it was as entertaining as one could have expected from a 40-year-old boxer who hadn’t fought in two years and a UFC fighter with no boxing experience. Did it live up to the hype? Debatable. But one thing is for sure: the likelihood of another mega fight like this won’t come around anytime soon.

Hot off the heels of his big bout, Mayweather announced a two-year partnership with German designer Philipp Plein. Plein created a custom robe and trunks for Mayweather’s fight, while his entourage was outfitted in bespoke looks for the night. The partnership, though, isn’t completely out of left field. Both the designer and boxer have mutual admiration for one another and the idea of the collaboration was born last May when the boxer joined Plein on the runway at the designer’s resort show in Cannes.

And now the public can get in on the action with the first capsule collection of T-shirts, available in limited quantities. The “Floyd One” features an all-over print in gold that celebrates Mayweather’s undefeated record in 50 bouts. 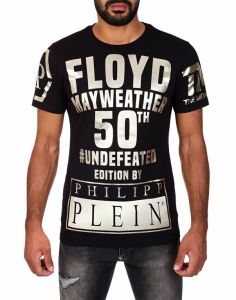 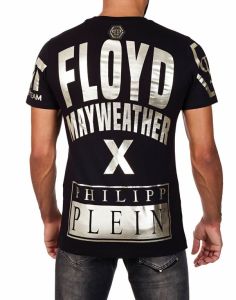 The “Mayweather One” is a tad more in your face with the same graphic print, only rendered in both gold and crystals. Just how big a fan of both Floyd Mayweather Jr. and Phillip Plein are you? The shirts are expected to sell quickly (and become collectors items), despite the hefty price tag, so we’d suggest getting your hands on one soon if you’re more than a fair-weather Mayweather fan. 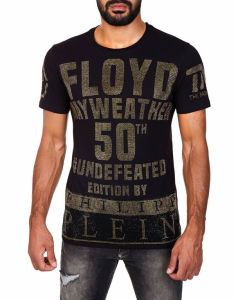 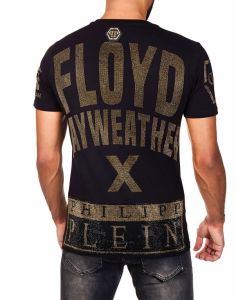 As for McGregor, the athlete recently announced a partnership with David August Heil, the tailor behind the now infamous “F*ck You” suit, and the duo will launch August McGregor, an affordable shirts and suiting line, in early 2018.