The idea of skirts for men is not a new idea, fashion-wise. Jean-Paul Gaultier started designing skirts for men back in 1985. He wasn’t the only one championing the idea of men showing off a bit of leg, other designers who showcased skirts for men include Vivienne Westwood, Giorgio Armani, Dries Van Noten, Rick Owens, John Galliano, Marc Jacobs, Thom Browne and a few others. And while we’ve seen celebrities as far back as the late 80s (Axl Rose, Robbie Williams, Depeche Mode’s Martin Gore) wear skirts on stage, why are they suddenly catching on?

A Brief History of Skirts for Men

Fashion reflects society; it quickly becomes a snapshot of the cultural zeitgeist. Pick an item from any era, and it immediately informs someone what occurred in the political, socio-economic and the psyche of that decade. One could state that the rise in skirts for men is a statement on gender fluidity, on the idea that fashion is genderless and can be used to celebrate one’s individuality as opposed to the idea of “fitting in.” During lockdown, men started wearing sarongs as they afforded comfort and style.

Thing is, there have been men who’ve always preferred to wear a skirt. Back when I worked on a newspaper, an editor, a single dad of two boys, who showed up for work one day in one of his usually rumpled graphic T-shirts, and instead of jeans, he paired the tee with a skirt. Living in a sub-tropical climate, he got fed up with feeling like his lower half were constantly on fire, so he whipped up a couple of basic skirts (elastic waist, full skirt, and a simple side seam) and started wearing them in rotation. While he got side-eye frequently wearing his skirts around town, he was pretty much left alone.

Skirts for men can be found in almost every culture in the world. Like the aforementioned sarong, which is worn in southeast Asia, here are a few more examples: there’s the longyi of Myanmar, Madagascar has the lamba and the Samoan lavalava, which is a unisex skirt. In western culture, men have worn kilts for formal wear, and as part of a military uniform. Both UK and US military have kilts as part of formal dress with tartan plaids that are specific to each branch of service.

In this shot for Vogue, Harry is wearing a #WalesBonner Fall 2020 kilted skirt.https://t.co/XYF7s3lunV

Fast-forward to now and we can throw accolades or garbage to the people who’ve seemingly, in a blink of an eye, brought skirts for men to the forefront of fashion. Back in 2015, Lebron James paired a tiny skirt with pants on his way to practice. Harry Styles wore a skirt on the cover of Vogue magazine back in 2020 and he’s worn skirts on and offstage. Football player Odell Beckham Jr wore a kilt and vest outfit to the 2019 Met Gala, Miami Dolphins’ Tua Tagovailoa has been spotted wearing a lavalava. Lil Nas X wears skirts, and of course, we can’t forget Dan Levy wearing skirts in Schitt’s Creek.

However, the most famous man wearing a skirt isn’t a celebrity, it’s Mark Bryan, an American robotic engineer based in Germany. Bryan has documented his outfits on Instagram (@markbryan911). With over 577,000 followers, his outfits have resonated with so many. Bryan’s been interviewed in a variety of newspapers and magazines. He’s stated that he started wearing heels when he and his girlfriend (now wife) would dance in college, and that progressed into wearing skirts and heels.

Sebastiaan Vermeulen’s (@nw5qs.sebastian) Instagram account went viral after he was featured in Men’s Health in his hand-sewn skirts.

Instagram’s #meninskirts hashtag brings up over 20,000 images of guys wearing skirts in their everyday life. It also brings up a few NSFW photos, so it might not be a good idea to fall down that rabbit hole at work.

Menswear designer Thom Browne created a unisex skirt for men uniform comprised of a smartly tailored blazer that’s paired with a full skirt. Celebrities who’ve worn Browne’s skirts include Odell Beckham Jr, Lil Uzi Vert, Dan Levy, Lebron James and Black Widow/Stranger Things star David Harbour. Harbour was recently featured in GQ and said, “I just really like the skirt idea on a man.” He went on to say, “And with gender fluidity being what it is, I think really what we’re reexamining is gender roles in a societal structure. It’s very serious, but it’s also very fun.”

The Why of Skirts for Men

And this brings us to the “why,” the reason why men are embracing skirts and why they are so popular. In the GQ interview, Harbour touched on gender fluidity, and that is a definite factor as to why skirts have become so appealing to heteronormative and non-heteronormative people. Earlier in the piece, we touched on how fashion can be used to immediately capture and reflect what is going on in society. As society, in general, becomes more open to the ideals of gender fluidity, fashion tweaks itself to become genderless. Vogue went in-depth on genderless fashion, gender fluidity and the future of fashion in a recent article. Bringing up Harry Styles again, he’s been quoted saying that when he chooses clothing, he picks items that appeal to him regardless of who they were originally designed for — man or woman. His criteria is simply whether or not he likes it.

When Dan Levy wore skirts in Schitt’s Creek, it was a combination of wearing what he liked and a subtle statement of who he was. Fashion is clothing, but it’s also more than “just a shirt.” Fashion tells the world how you see yourself, where you are psychically and mentally. Fashion is socioeconomic, it’s also a personal statement, and aspirational. Remember the adage, “dress for the job you want, not the job you have,” well, that can be transposed into “dress for the way you are, not the way people think you are.”

The Best Skirts for Men To Wear Now

If you’ve been toying with the idea of wearing one of the skirts for men that are available to buy now, take a style tip from Mark Bryan: pair the skirt with a masculine top, heels optional. If you’d prefer to follow Harry Styles’ lead, mash up your style with a dose of masculine and feminine apparel and accessories until you feel the items are effectively balanced to reflect your personality.

Below are a few men’s skirt options that are available to wear this fall.

Made from wool and cashmere, this pleated skirt feature’s Browne’s striped logo. It has a concealed closure and is longer in the back. Try it with combat boots and a sweatshirt or crew neck sweater. 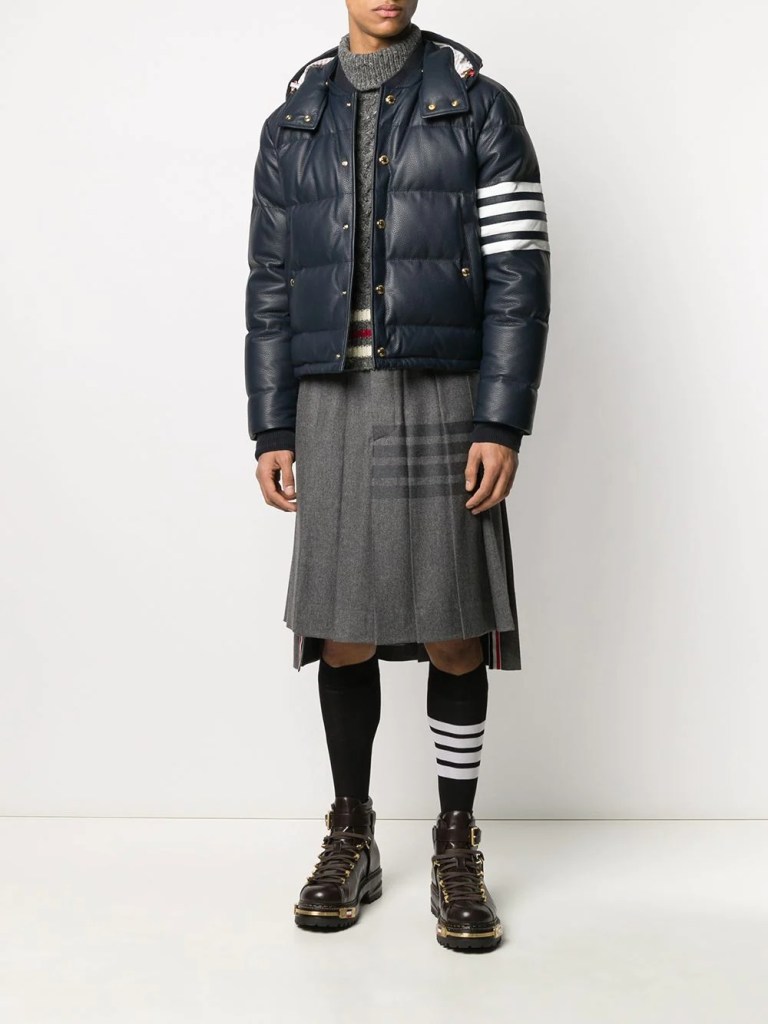 Yamamoto’s fall men’s skirt is full and has a soft pleat. The poly-blend skirt features an elasticated waist, back pocket and a high waist. Go rock n’ roll with it and try it with high-top converse and a graphic tee. 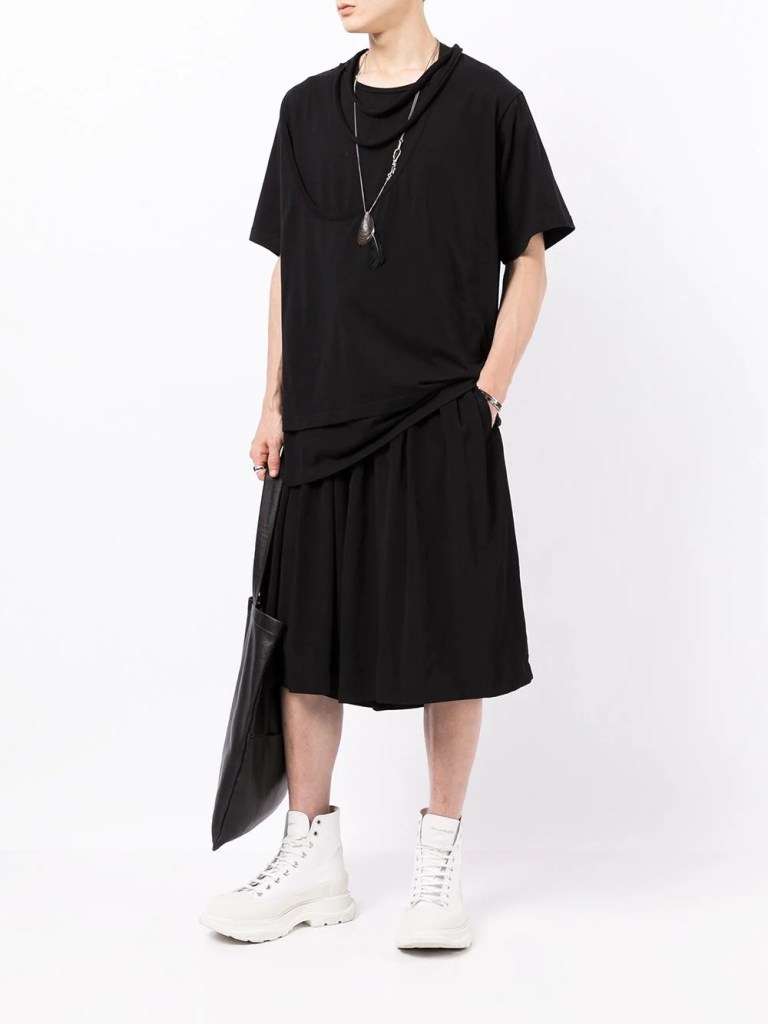 Burberry serves up tradition with a twist. This men’s kilt is done in a subtle plaid and cut to knee-length with buckled sides. It could be worn over jeans (as shown here), or with a blazer, knee socks and lace-up brogues. 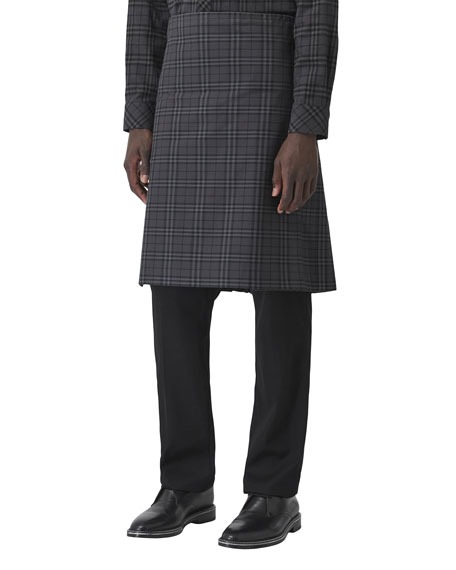