Spy sunglasses with tiny, built-in cameras, long the stuff of science fiction and Bond films, have finally been packaged as a usable and affordable product. These spy glasses have a pair of miniature cameras hidden in their sleek and unobtrusive frames. Thanks to technologies like Bluetooth streaming and image optimization, they actually provide useful connectivity and pair great with social networking apps, even if you use them to record your hiking trip or live stream a show, rather than for some clandestine purpose.

The mini Bluetooth camera in these spy eyeglasses shoots full HD 1920 x 1080p, with a 5-megapixel CMOS sensor, delivering clear imagery in a discreet form. The glasses record onto an SD card and they come supplied with an 8 GB SD TF card, making it relatively simple to upload and view the footage. Two buttons on the arms allow you to start and stop recording. The top of the temples also pops up to reveal a hidden USB key for connected file transferring. A nifty gizmo for party tricks, vacation recording, or just to say you have them, the spy eyeglasses are a notable realization of a long-developed fictional trope. 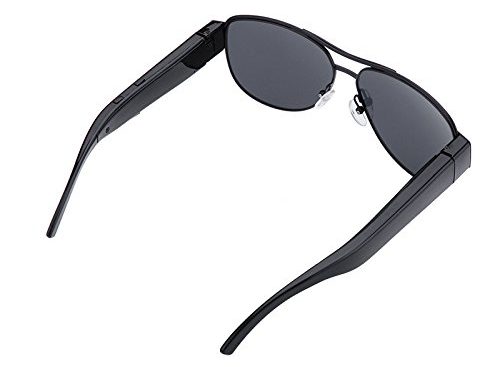 In fact, the concept of glasses with hidden spy functions goes all the way back to the 19th century, when glasses with hidden mirrors appeared in detective fiction and were said to be used to cheat at card games. While we’ve come a long way from the days of Sir Arthur Conan Doyle and Henry James, the idea of innocuous accessories that boast unexpected and neat functions is still going strong.

These spy eyeglasses, with their mini Bluetooth camera, are a great proof of concept for the inclusion of simple wearables into day-to-day life. Affordable and less intrusive than Google Glass, they stand out for maintaining a reasonable amount of style. Some credit goes to a design that looks more like a classic pair of aviator sunglasses than most wearables, which can give the impression of something a cyborg would wear to Ibiza.