First Lady Melania Trump’s official White House portrait was released last week, conjuring up varied reactions from followers and the media alike. After the portrait was posted on the White House website, Dolce and Gabbana’s head designer, Stefano Gabbana posted the portrait on his personal Instagram page, confirming rumors that he dressed the FLOTUS for the event by thanking her and commenting on her beauty.

His post stirred up mixed responses concerning Gabbana’s support of the Trump administration–whether relevant to him dressing the first lady or not. 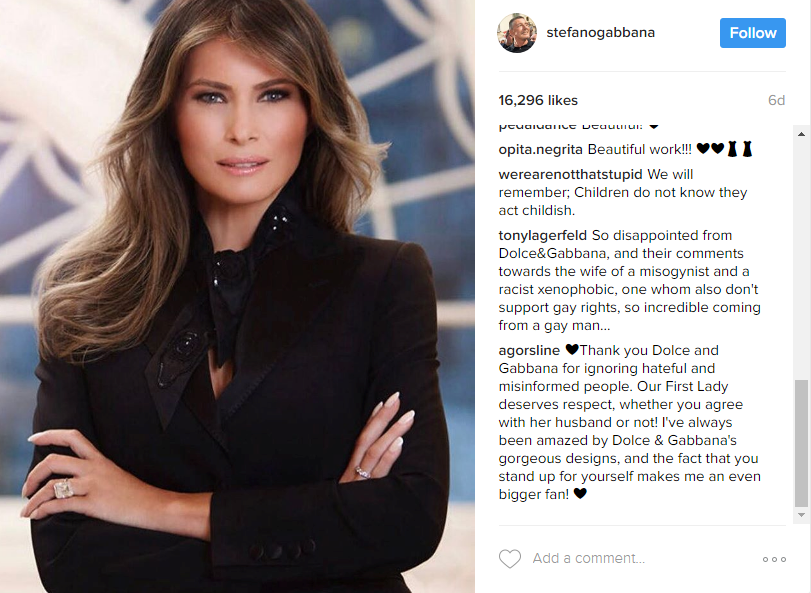 The designer’s Instagram post also received ample media coverage, with commentators weighing in on what this signifies about the designer’s stance on the new administration.

Since the initial post, Gabbana has posted a series of follow up posts, re-affirming his gratitude to the former model, and defending his support of her. Gabbana’s follow-up posts feature screen shots and videos of media coverage weighing in on the controversy. In his most recent post, Gabbana re-posted an image from alt-right newspaper (which current campaign strategist Steven Bannon formerly ran) Breitbart News Network, which featured the story’s headline stating that Gabbana told critics who disprove of his support of the First Lady to “go to hell.” 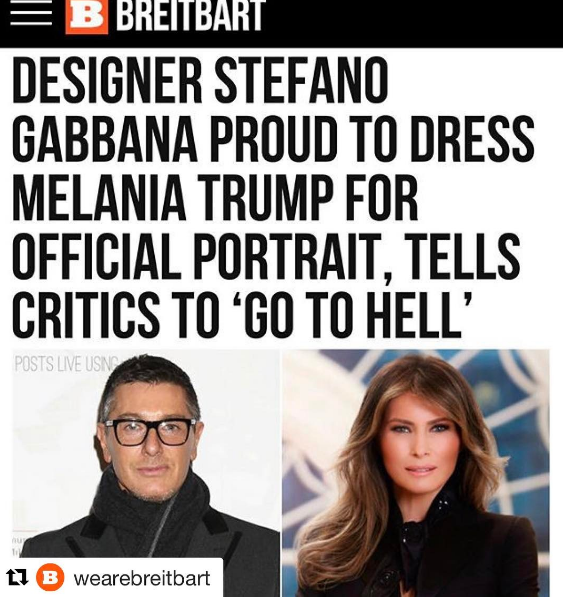 Naturally the designer’s praise of the FLOTUS drew a mixed response from followers, fans and supporters. Many of the comments were actually positive, acknowledging that there is a separation between fashion and politics, and understanding the career significance for a fashion designer that comes with dressing the first lady signifies. Some of the critics of Gabbana’s decision to dress her, saw the designer’s post as an endorsement and gesture of support to the Trump administration and his political agenda. Other comments were centered around the administration’s anti-LGBTQ sentiments, implying that the designer — who is gay himself — was a hypocrite for dressing the wife of a president who has not openly supported gay rights.

The tension between fashion designers and the issue of dressing Mrs. Trump has been unprecedented, leading many designers to offer public statements regarding whether or not they would dress her. And, because Melania is a former fashion model, this presents an even more difficult position for designers who want to maintain their political distance from her husband and his political agenda.

Most designers seem to agree that the idea of separation between fashion and politics should be cemented, and that dressing the First Lady does not equate to supporting the Trump administration. Diane Von Furstenberg, Thom Browne, and Vera Wang, have all stated that they would dress Melania out of respect for the position and American tradition. Other designers including Marc Jacobs and Phillip Lim – who were vocal about their disapproval of the Trump during the 2016 election — revealed that they wouldn’t dress her.

Interestingly enough, while Gabbana has been vocal about his support for the First Lady, his business partner and label namesake, Domenico Dolce, has yet to offer any public statements in either direction.