* Which came first…the Yeezy’s or the boots?
* Hardcore tactical boots ready for battlefield
* Made from suede leather and breathable nylon

We all know about the Yeezy takeover that has given Kanye West a heightened influence outside of the music world and brought a very specific style of outerwear to the streets. His Yeezy Boost runners, which will cost you about $450, resemble the classic outdoor army boot but they are made in Italy with calfskin leather and nylon, deeming them more of a designer boot for show-and-tell rather than a hardcore piece of footwear worn on the battlefield. So, the question lingers, do these look just like Yeezy’s or do the Yeezy’s look just like these tactical boots?

These tried-and-true boots are sworn to be your answer to outdoor ventures like hunting, gaming, camping and those who are called to duty. This pair is made with a suede leather upper on the bulk of the shoe with hints of nylon mesh for breathability during the action. They are meant to stand up to every element like rain, mud, sweat, snow and sand but are actually available at a fairly affordable cost ($145) especially if you need something that will last you through the years. The Garmont Tactical T8 says it is designed specifically for traction and stability with an added feature of shock reduction throughout most of the shoe. These lace up very nicely with the ball bearing hardware that secures your laces in their place, allowing you to adjust to your needs. This version looks very similar to the colorway that the Yeezy’s come in and are called Desert Sand. They have a high-rise ankle, unlike the Yeezy’s, meant for support and protection when working with equipment and leaping from unpredictable heights.

One Amazon customer highly reviewed these boots saying, “Best boot you can own. Did not require any break in time out of the box. Handled like champions during my ruck march up the alps in Germany, never developed any hot spots or blisters either. These pair of boots comfort are on the same scale as running shoes at the same time they don’t sacrifice any ruggedness for their comfort. A must purchase boot.” Although these resemble the high-priced Yeezy’s, you can bet these are inspired by the original tactical boots meant for wear and tear beyond the runway. 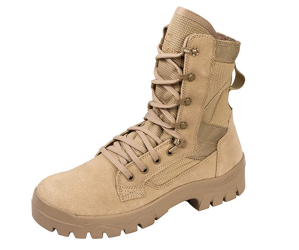 Buy Now on Amazon
The Ultimate Spy Guide to Shoes