In this installment of SPY’s “Steal Their Style” franchise, our Senior Commerce Editor Taylor Galla talked to the costume designers behind the new TV show The Bear on FX. Find out how these designers dressed their scruffy chef and how to style the perfect white tee.

FX’s new show The Bear is arguably the show of the summer, and if you haven’t seen it yet, take this as your sign to binge the eight 20-minute episodes immediately. The show, and its main character Carmen “Carmy” Berzatto, played by the sexy AF Jeremy Allen White, have caught the attention of everyone from men’s style nerds to cartoonists of The New Yorker. The program doesn’t just show you the potential emotional trauma behind some of Chicago’s most delicious meat sandwiches, it also gives a master’s level course in how to wear the hell out of a white T-shirt.

I’m talking, of course, about the uniform worn by Jeremy Allen White throughout the series, which has already become the subject of fascination and obsession across the web.

SPY spoke with Cristina Spiridakis, the costume designer for the pilot, and Courtney Wheeler, The Bear’s costume designer for episodes two through eight. The team walked us through the ethos behind the white T-shirt itself, the brand they finally settled on after trying tens of different options, and how they crafted the look of the show through practical statement pieces.

T-shirts are something of an obsession for SPY. We’ve done extensive testing to find the best T-shirts in the world, and that includes the best white T-shirts, too. We have to admit, the exact T-shirt from The Bear, the Merz b. Schwanen 215 Classic Crew Neck T-Shirt, was new to us. If you want to steal this style, or just check out some picks of Carmy in the kitchen, read on.

The Bear Is a Show About High-Quality, Everyday Basics

From the first episode of The Bear, it’s clear that this show is about a bereaved brother trying to keep his recently deceased twin’s sandwich shop alive. It’s also a show about menswear basics and the value of high-quality, everyday pieces.

When the restaurant falls behind on a meat payment, Carmy raids his stash of vintage denim that’s bursting out of every nook and cranny in his apartment, from the oven to the storage cabinets. He makes a sale in exchange for top-shelf beef, clarifying with the recipient that the Big E. selvedge jeans, Levi’s short-lived collection, don’t have rivets because copper was limited during WWII when they were produced. They seal the deal by adding a vintage Levi’s Type III trucker jacket that’s pleated.

This guy cares about men’s fashion. This is a guy you go to if you’re looking to buy the best possible white T-shirt available. 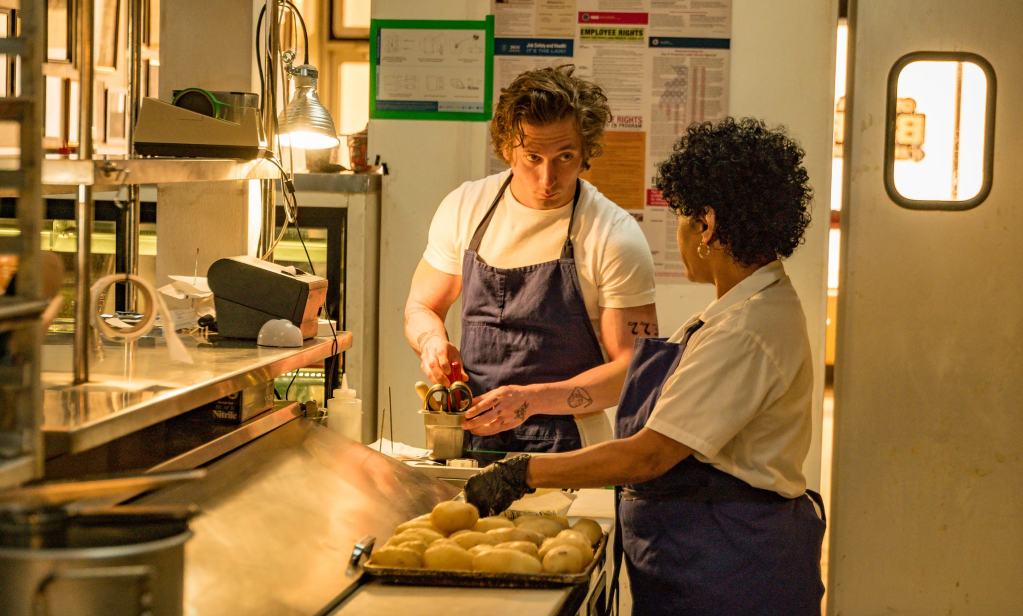 The White T-Shirt From The Bear

This show largely takes place in and around a kitchen, where the staff isn’t required to wear a strict uniform, but there’s still a fairly limited scope of what you would realistically wear in that environment. Something you’re comfortable in, can move in, and that you don’t care about getting stains, burns or splatters on.

“The subtlety in the costumes is what attracted me to the project because you’d have to work harder to tell a story about somebody when you have like a very limited character parameter, and very limited parameters to work with. Even though they’re not in uniforms, there are rules, there’s like physical limitations,” said Spiridakis.

“I liked the idea of telling a human story with less and less canvas to work with, and having to get into even smaller details to convey to the audience who this person is.”

For the show’s main character, Carmy, one of those details became the infamous white T-shirt, with which the internet has become obsessed both because of its craftsmanship and the build of the person wearing it.

“When I was doing the research and talking to chefs that I know and falling into a research rabbit hole, finding images of people that felt akin to Carmy, this sort of very common kitchen look kept coming up. The white T-shirt, the black Dickey, the Birkenstocks. Every profession, every craft, there’s almost a thing. So, for Carmy, it was about that, and that that was the type of chef that he was and that felt fit for him,” said Spiridakis.

The T-shirt they ultimately landed on? The Merz b. Schwanen 215 tee, a $110 T-shirt from a small German brand that’s been made the same way for decades, through the peaks and valleys of fast fashion trends. This might seem like a steep price tag for one shirt, and it is, so we’ve included some alternatives from the show’s designers below. 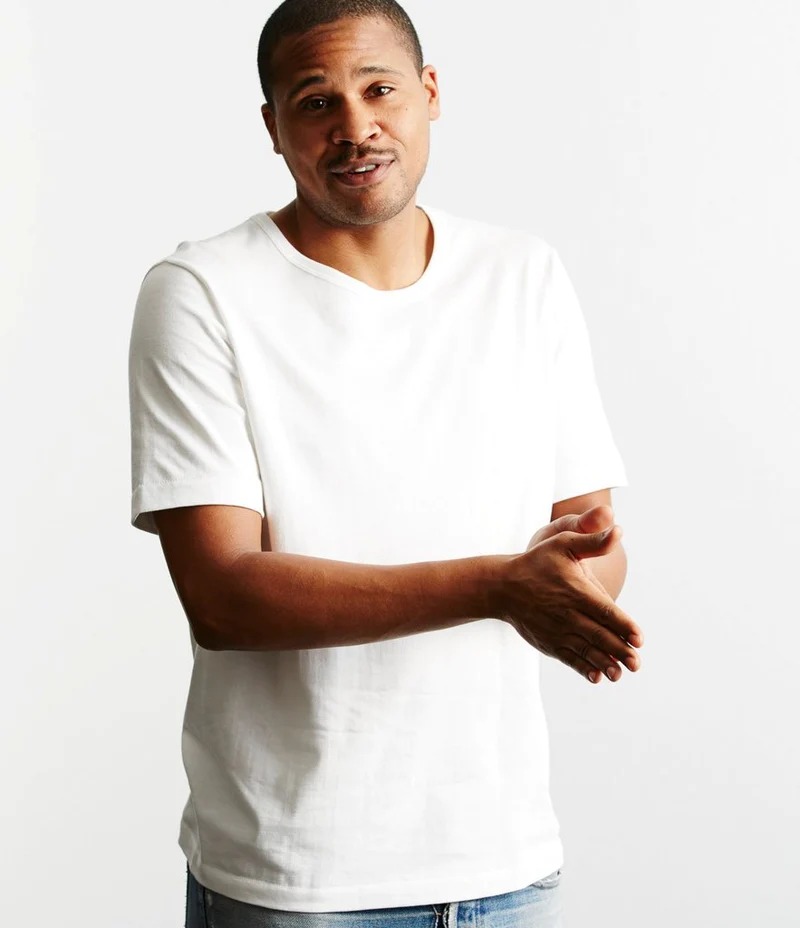 Vicious Googling of boutiques on the lower east side of Manhattan, trying to find a T-shirt Spiridakis had purchased for a prior project, yielded what’s known as the “Marlon Brando T-Shirt.”

“It’s the Merz b. Schwanen 215 tee. When you see them in person, when you interact with them it’s just different. They’re made differently, and I think that’s clearly reading, I think people are picking up on that because who knew a white T-shirt would spark an extravaganza with the world’s most reluctant sex symbol, Jeremy Allen White,” said Spiridakis.

Alternatives To The Bear White T-Shirt

There were a few other T-shirts the costumers for The Bear tried on before settling on the premium, luxe option you see on screen. One of the alternatives that almost made it? Just a plain white Hanes T-shirt.

“In Carmy’s pilot fitting, we had Merz b. Schwanen, just a regular Hanes undershirt because you can’t go wrong with that, Hanes and Supreme, and I literally think that was it. Maybe one more? Potentially Good Life, they make a beautiful white T-shirt,” said Spiridakis.

She explained that they gravitated towards these brands because of their high-quality precedent and reputation, something the character would resonate with.

“The brands we settled on for him. The Merz and Whitesville, they’re made the way they were before we all became addicted to fast fashion and moving through things. They are made with quality. That’s where that came from.”

“They might be utilitarian pieces, but they’re quality pieces. He’s a person who values quality, and that’s why he’s a denim head. That’s why he would be attracted to wearing Merz and Whitesville and Hanes. He respects it and acknowledges that there’s a craft to everything.”

If you’re looking to replicate the look from the show, you’ll be grateful to learn you don’t have to spend $100+ on a white T-shirt.

“I think that in every price range there is a good T-shirt available. I think if you’re looking for something very classic that’ll last you a really long time, in my recommendation, these super narrow collars that they do at a lot of the fast fashion places, that’s not it. It’s not a nice look,” said Spiridakis.

“If you’re going to go with something classic, it is within your advantage, obviously within your means, to go with something quality that is going to last you, because it does really make a difference. But alternately, I stand by it…you can’t go wrong with a classic white Hanes T-shirt, wash it, shrink it a little bit, if that’s what you’re comfortable in. That with a really good pair of jeans and a good boot, or sneaker, or whatever, you’re pretty much set for life. It’s universally hot, across all genders.”

“Good does not mean expensive. Things are a classic for a reason, Hanes has been around for what? 100 years? For a reason.” 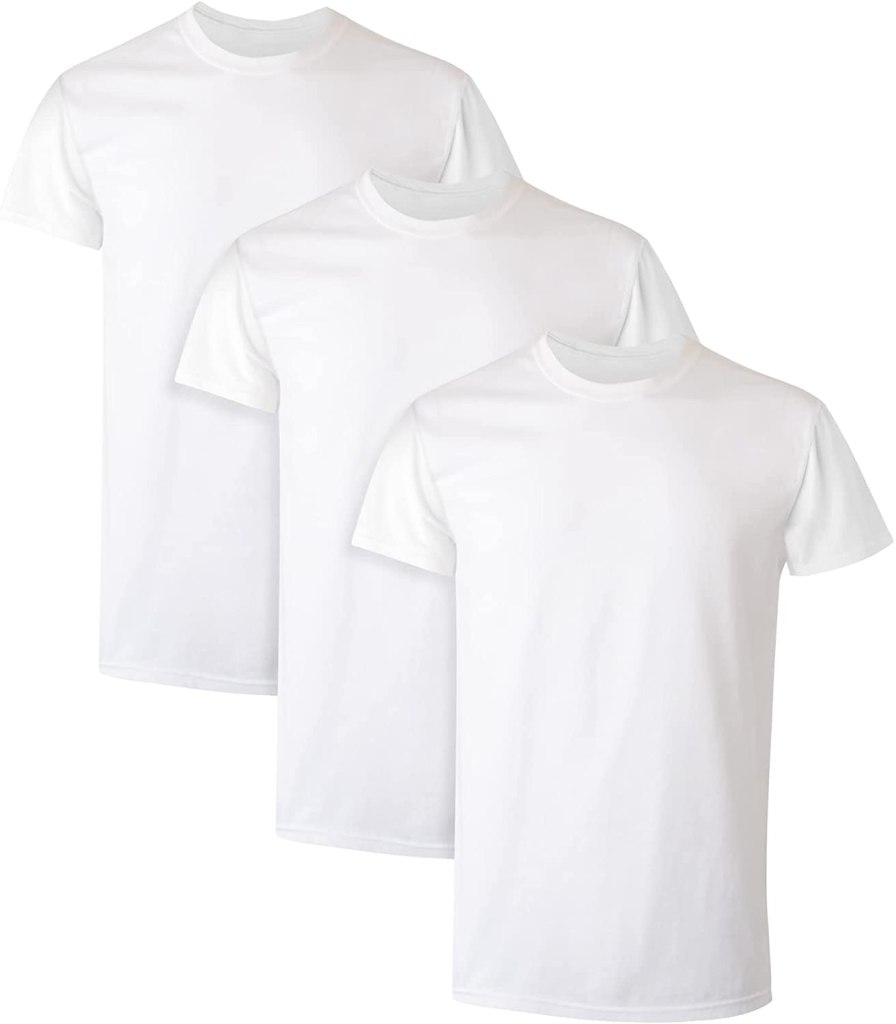 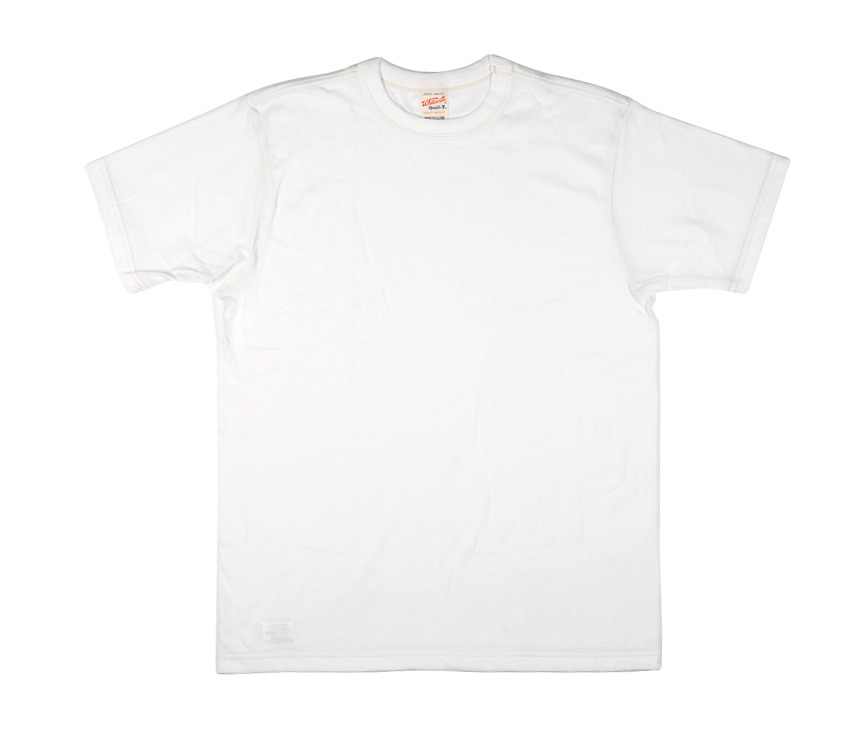 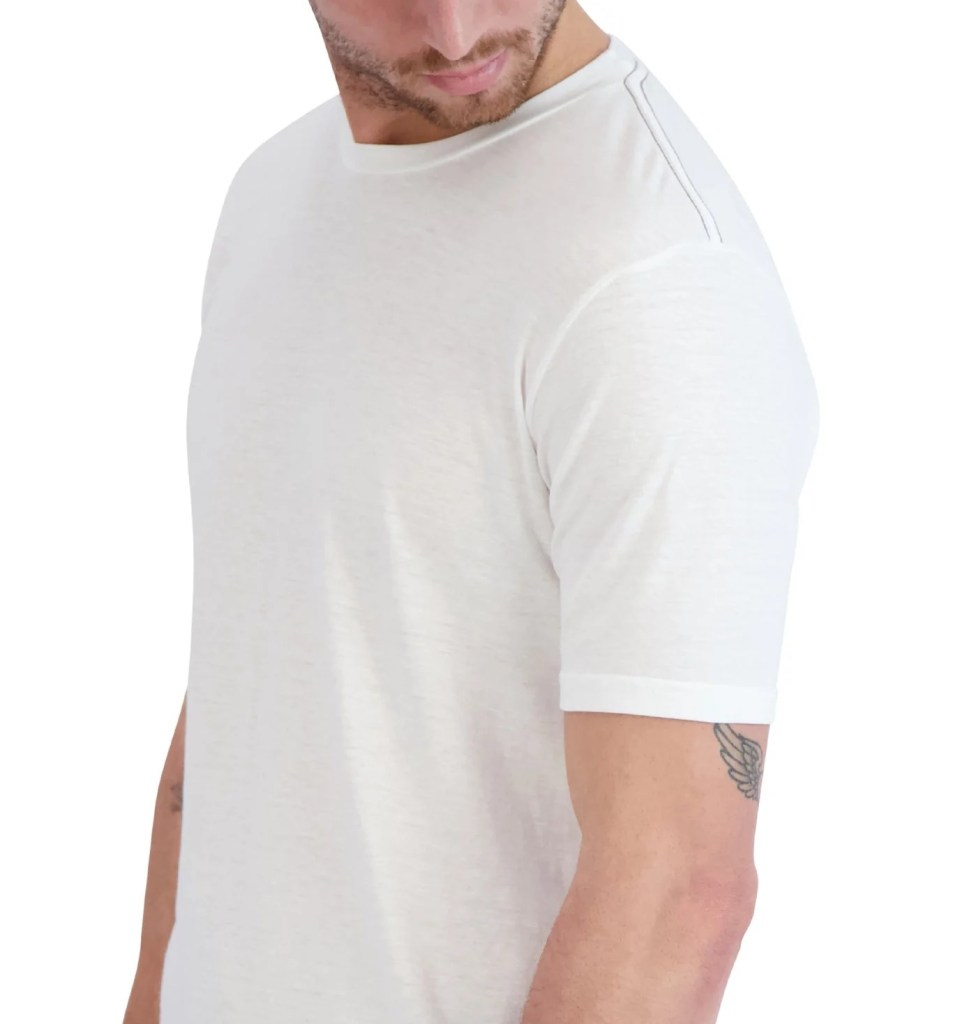 How To Wear a White T-Shirt, According to The Bear Costume Designers

I also asked Spiridakis and Wheeler if they had tips for men looking to find a great fit for a white T-shirt.

1. Figure Out What You Want to Accentuate

“Jeremy has shoulders and very built arms, so the reason that T-shirt, aside from being a beautifully-crafted T-shirt, it’s a T-shirt that’s based on Marlon Brando’s T-shirt in A Streetcar Named Desire. So, you think about Marlon Brando, who is all chest, shoulders and arms. It’s about what makes you feel good in a white T-shirt? What is it that you want to accentuate?” said Spiridakis.

2. Go To a Tailor and Get The Shirt Augmented For You

Both costumers also adamantly vouched for going to a tailor and having them adjust pieces to fit you as well as possible.

“Try on a few different fits, figure out what you want to accentuate. Most stores have tailoring services available, I know Nordstrom tailors jeans, why can’t they tailor a T-shirt?” said Wheeler.

“Make sure it’s a wider collar and that it won’t droop. The thing about those wider collars is it collapses in on itself,” said Wheeler.

3. Pair With The Right Pants and Shoes

They also recommended pairing the T-shirt with a really nice pair of jeans, or Dickies Cargo Work in Progress Pants and Birkenstocks if you want to complete the entire look from the show. 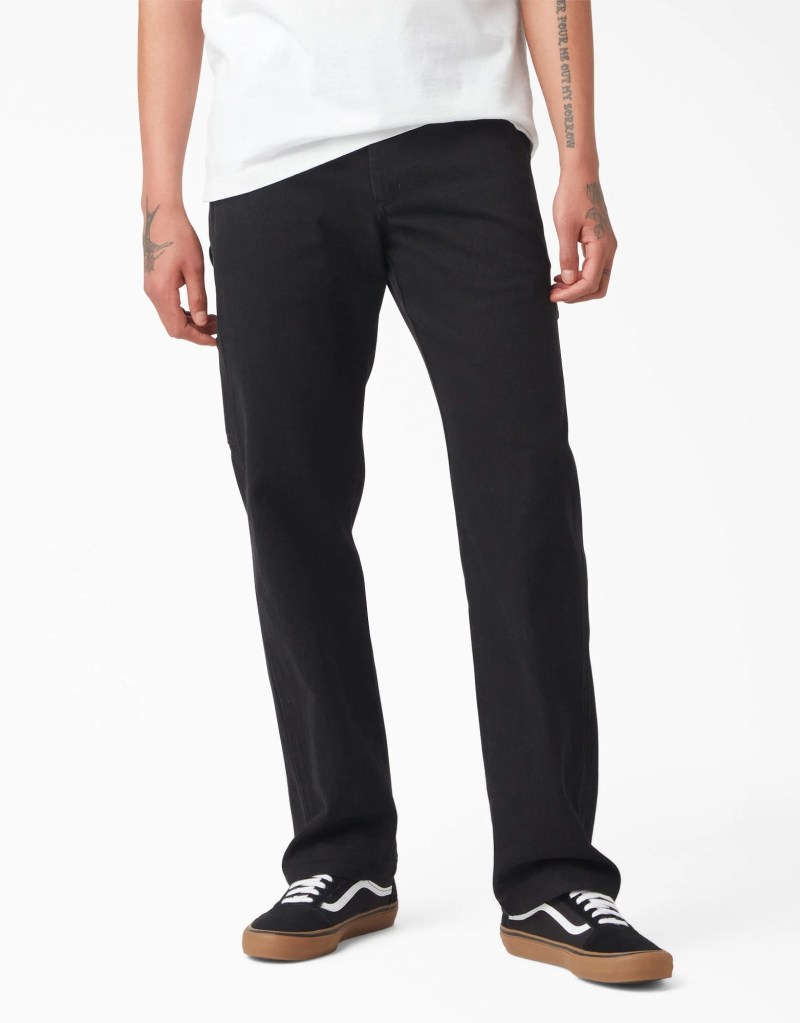 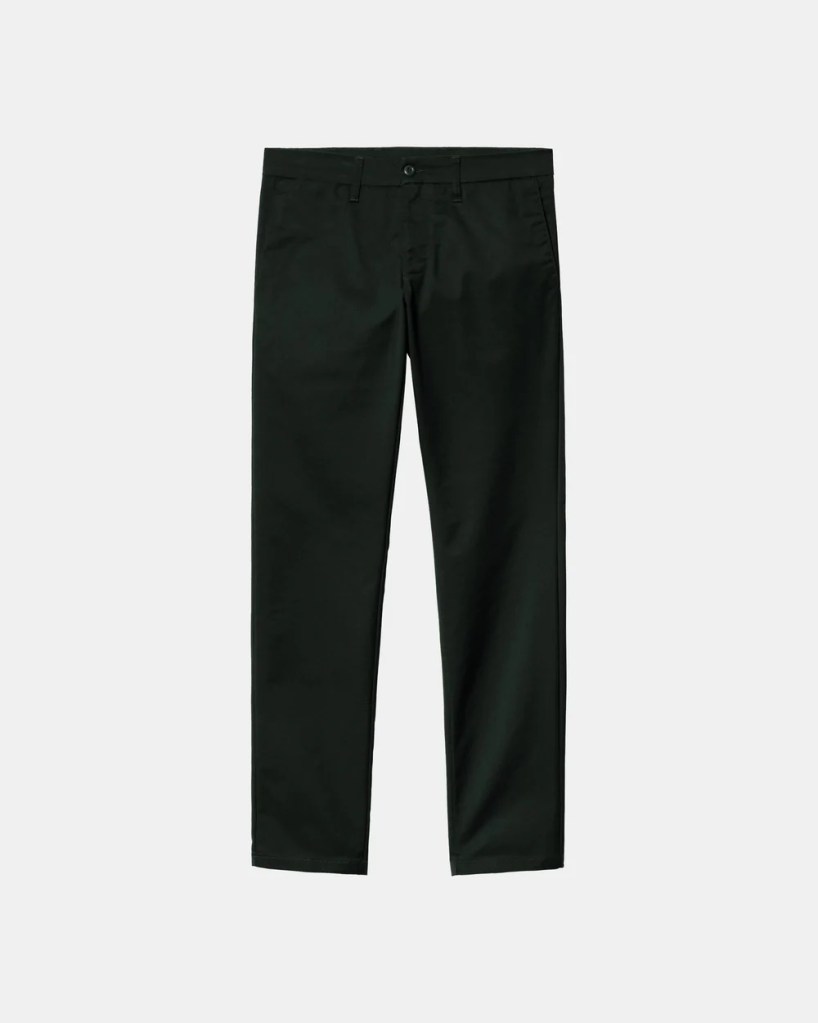