“Just because you don’t understand something doesn’t make it wrong,” Matt LeBlanc’s character Joey Tribbiani says to his pals in a season five episode of Friends.

The year was 1999 and Friends was an international sensation. It was the thirteenth episode of season five, “The One With Joey’s Bag,” and Joey had just fallen in love with said bag. In fact, that’s the central gag of this episode. He’s a man, but he’s wearing a bag. (You can watch a clip from the episode on YouTube.)

Rewatching this episode 23 years later, it’s incredible how normal Joey’s bag looks. If a guy were to wear a similar messenger bag or men’s work bag today, no one would think twice. 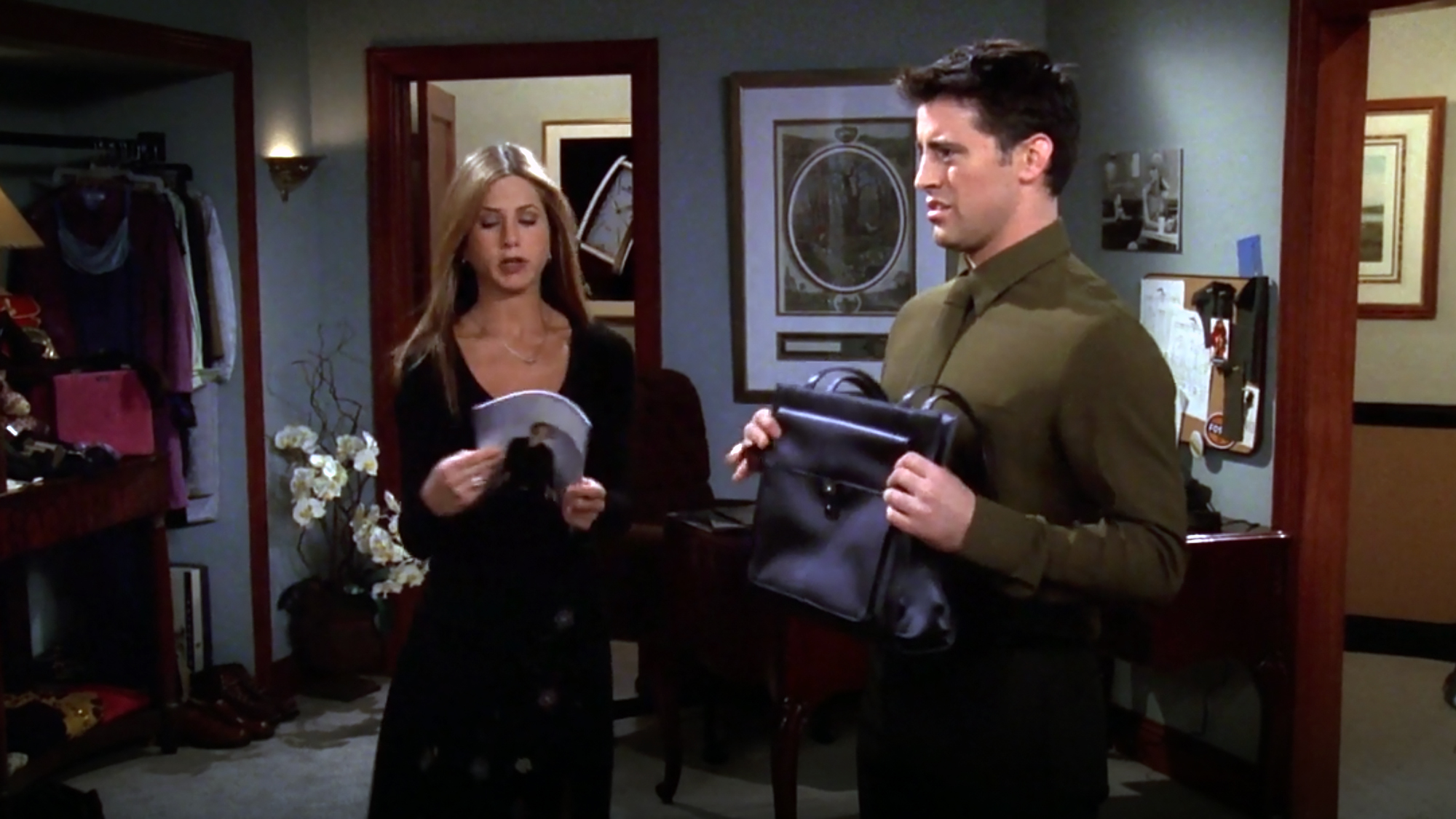 Screenshot from the 1999 Friends episode “The One With Joey’s Bag”. Courtesy of Warner Bros. 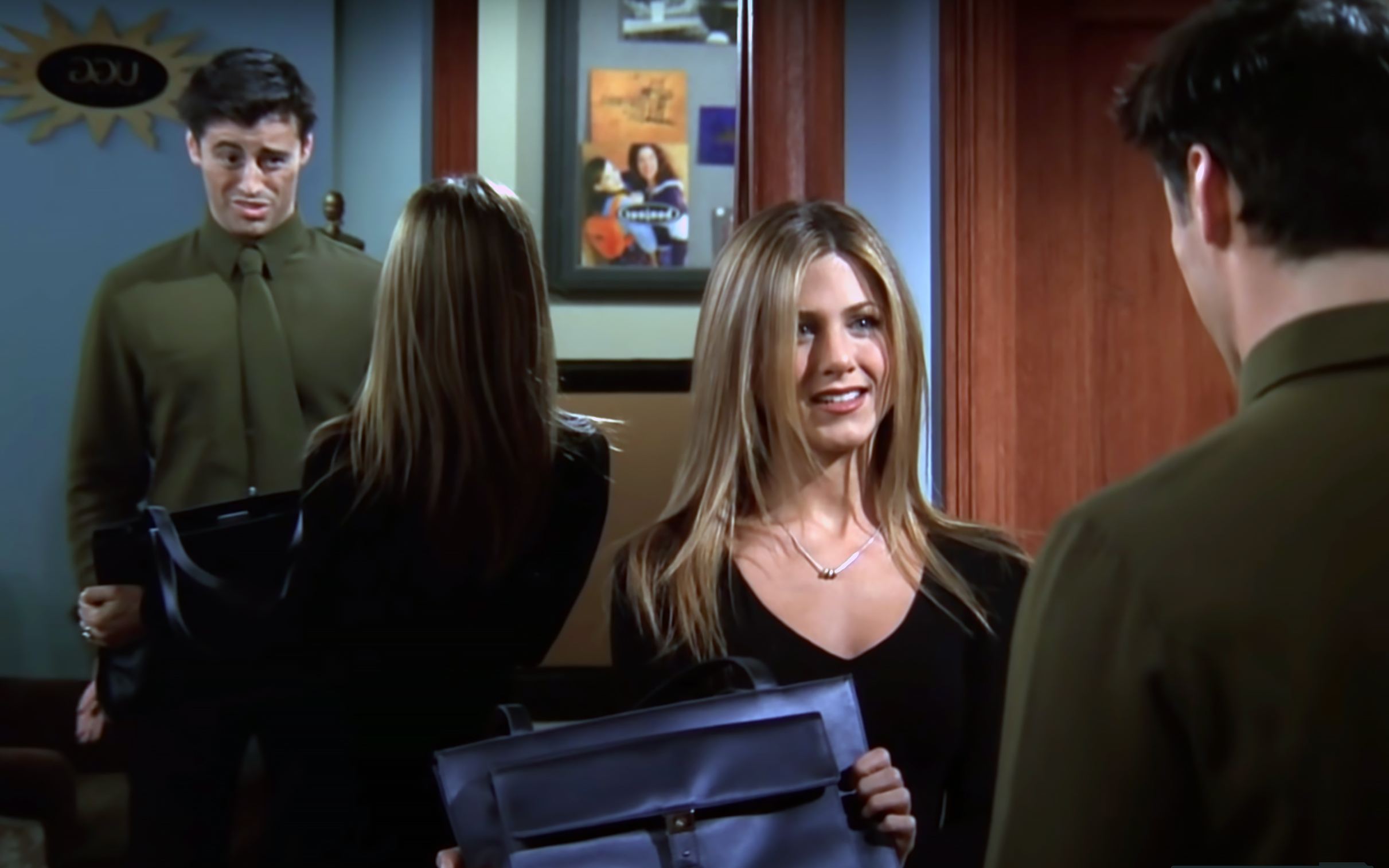 Rachel and Joey in a 1999 episode of Friends, “The One With Joey’s Bag.” Courtesy of Warner Bros.

The friends, living in their gratuitously oversized apartments in one of Manhattan’s most desirable, liberal Manhattan neighborhoods, find every opportunity to throw emasculating jokes at Joey, and those jokes feel particularly archaic when watching them in 2022. Based on his friends’ reaction, you might think that Joey is stupidly enamored with a bright pink clutch instead of a black leather “purse,” and a plain one, at that, free of any color, sparkle or ornamentation. It’s something the highly desired luxury brand, The Row, might have on their shelves right now. Modern bags do tend to have longer straps and are more often worn crossbody, but otherwise, it’s just a normal black bag by today’s standards.

Still, his friends ridicule him. Joey loves his new bag so much that he even wears it during an important audition. Sadly, he doesn’t get the role, and the episode ends with Rachel Green (Jennifer Aniston) saying, “The world isn’t ready for you and your bag.” (Yes — this is the same Rachel Green that only episodes later would start her job as an Assistant Buyer at Ralph Lauren.)

If you think about it, Joey actually has a really progressive attitude compared to his friends, and in the fullness of time, he was clearly right. Why shouldn’t he be allowed to enjoy his fancy bag?

In retrospect, “The One With Joey’s Bag” should have been called “The One Where Joey Smashes the Gender Binary”. This episode is a perfect example of how the dividing line between what’s considered masculine and feminine shifts over time, as does the enforcement of clothing taboos. “The One With Joey’s Bag” shows just how quickly these taboos and expectations can change, and how arbitrary they are in the first place. After 23 years, it seems absolutely ridiculous that a bunch of grown men would be so intimidated by a simple black leather bag.

Today, bags for men are as mainstream as it gets, and even fanny packs are a popular men’s accessory. Some of the most stylish men in the world have been seen donning small bags: Snoop Dogg, Kanye West, and Harry Style are just a few examples. They can also be seen on just about every high-fashion runway. At the latest Fall 2022 Menswear season, Amiri had leather bags tucked under a few models’ arms. Dior, too. At Kenzo, beautifully embroidered mini-bags were slung over models in a crossbody fashion.

So when did “handbags” or “purses for men” become acceptable in the mainstream? It started in the streetwear scene.

“The first time I noticed men wearing handbags was of the waist pack or belt bag variety,” celebrity stylist Vanessa Powell tells SPY. “Thanks to brands like Off White and Supreme, it became a huge streetwear trend that got Hypebeasts thinking about more than just their PTSR (pants-to-shoe ratio).” According to Powell, the push for men’s bags that fall outside of traditional gender norms is a natural development. In fashion, everyone is itching for the next big thing, and genderless fashion is a major trend right now.

“Whether it’s to flex on a designer name like Harry Styles and the Gucci Jackie 1961 bag, or Lil Uzi Vert in the Chanel Boy Bag, or serving as a style statement on the runways of Jacquemus, Thom Browne and Amiri, the idea of men wearing purses is the new norm,” Powell says.

Handbags for men have evolved from bold fashion statements to status symbols — like logo designer belts or sneakers traditionally were. Whether it’s carried like a clutch or slung over like a crossbody, bags are another way for men to flex their tastes, values, and, to be quite frank, deep pockets.

Compare the bag that Joey was ridiculed for in 1999 with the most in-demand designer men’s bags for sale in 2022 at a menswear store like Mr Porter: 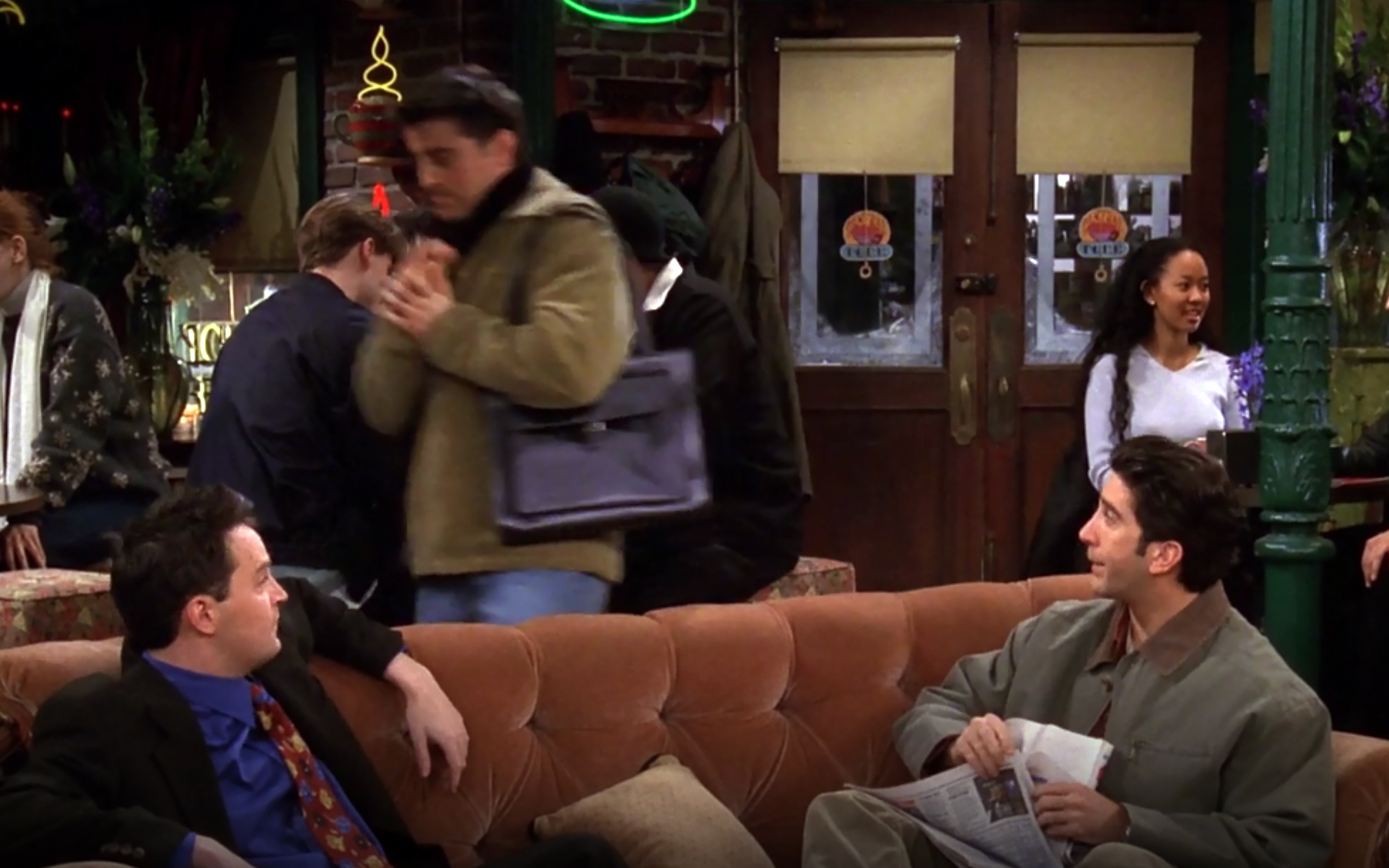 Joey wearing his “purse” in a 1999 episode of friends. Courtesy of Warner Bros. 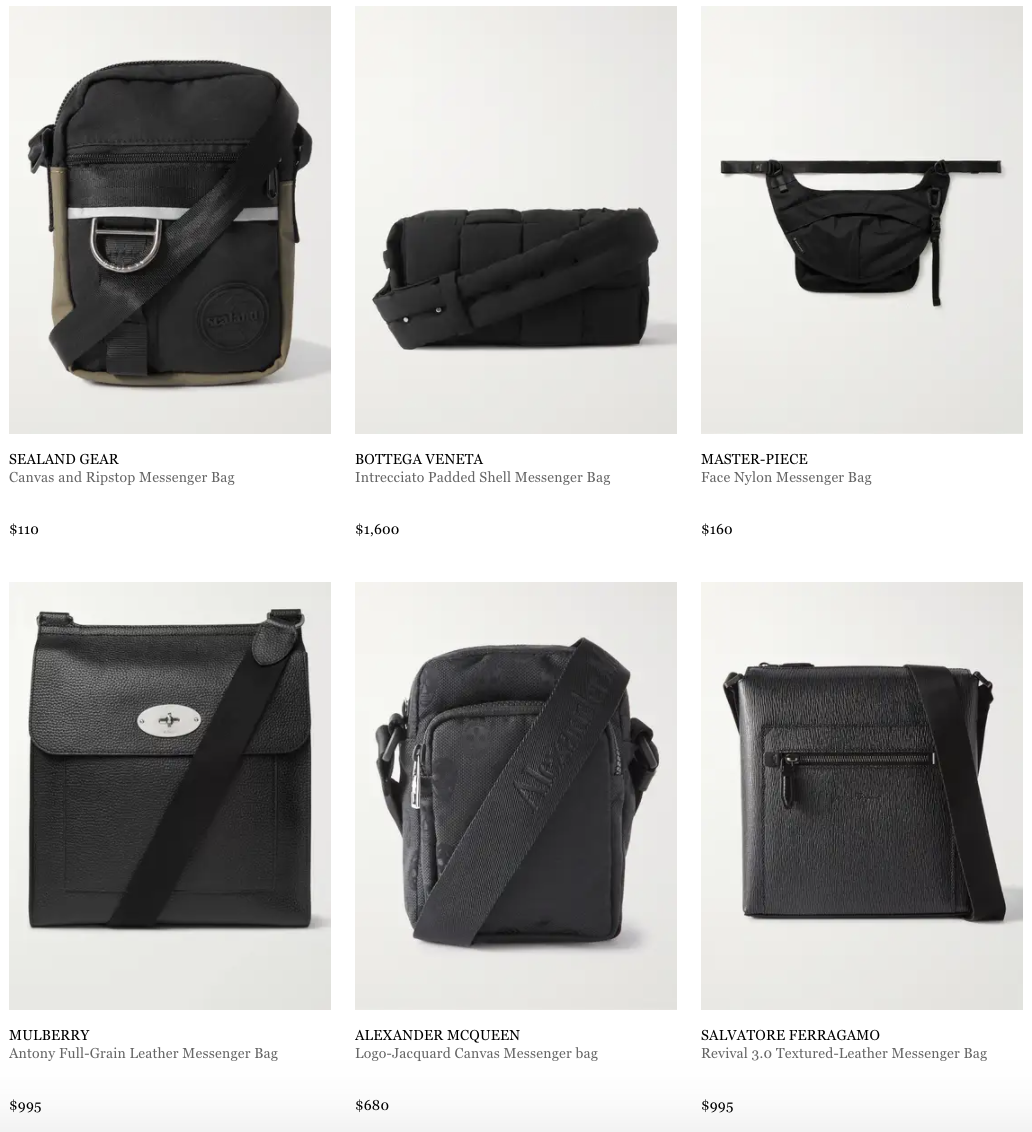 “Handbags have always been present in menswear,” celebrity stylist Sam Ratelle tells SPY. “We’ve called it a ‘men’s bag’ or a ‘briefcase’ and myriad other descriptions. But, make no mistake: it’s always been a purse.”

Tribbiani would agree. When his friends begin ridiculing him, he defends himself by mentioning its practicality and how much stuff it can hold. Aside from a slight design shift, it does exactly what a briefcase does: it holds your stuff.

There’s one more big reason we think men’s cross-body and shoulder bags have suddenly become mainstream. In the decades since this episode of Friends debuted, laptops have become an extremely common tool for students and the professional class. And if you’re lugging a laptop to and from work or school, then you need a bag that can hold it. Thus, fashion trends follow necessity.

Today, Joey’s bag resembles a lot of popular men’s work bags, many of which are about the size of a laptop and crafted from black leather. Still, thanks to trailblazers like Joey Tribbiani, modern men aren’t limited to one type of bag.

Men’s fashion, in general, is seeing a massive shift along these lines, and acceptance of fluid men who go beyond the norm is at an all-time high. Women’s sweaters and blouses are making their way into men’s closets, strings of pearls adorn men’s necks, and nails get coated with colored polish. A quick look at any recent New York Fashion Week schedule is telling. More menswear brands are claiming to be genderless, often offering versatile pieces that flatter, well, anybody.

“I feel that lately, men’s fashion is thriving in creativity and expanding in range, and this is just the beginning. We are shedding limitations and parameters,” says Ratelle.

“The One With Joey’s Bag” episode of Friends is a telling artifact of the late 90s, and poor, simple Tribbiani is the punching bag of the episode. The truth is that the would-be fashionista and struggling actor was undoubtedly ahead of his time. Though his friends shared many laughs at his taste in high-end men’s accessories, perhaps Tribbiani gets the last laugh after all. 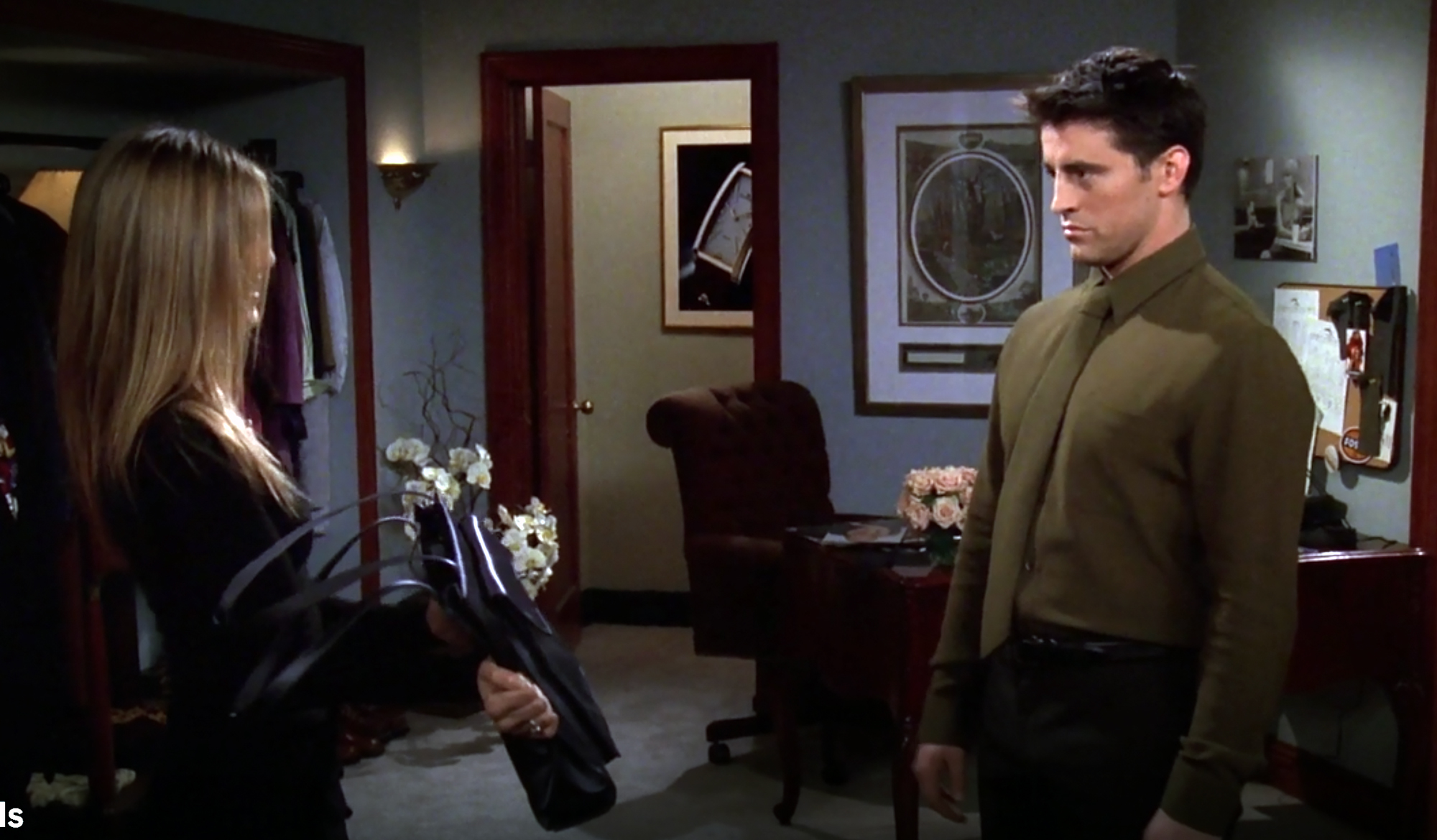 A screenshot from the Friends episode “The One With Joey’s Bag”.r Courtesy of Warner Bros. 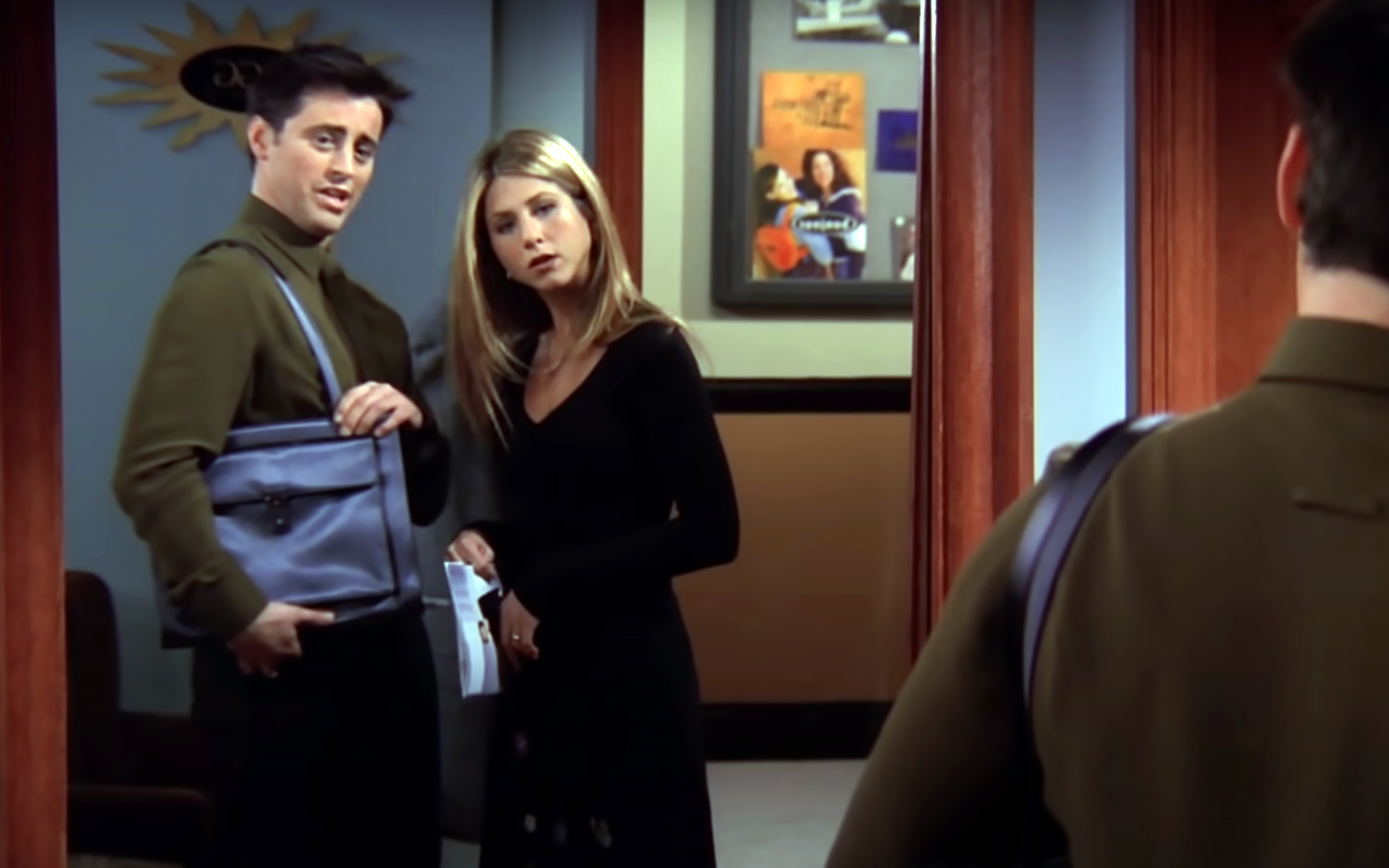