Red Wing Shoes is, without a doubt, the most iconic American bootmaker. Since 1905, Red Wing has produced its boots in the United States and continues to deliver exceptional quality. But if you’re looking to buy a stylish and durable pair of work boots, the Minnesota-based bootmaker isn’t the only name in the Midwestern footwear game. Thorogood, a Wisconsin-based work boot manufacturer, has been delivering quality footwear for 125 years.

Like Red Wing, Thorogood continues to manufacture its work boots in the United States, and their boots actually run at a more economical price than Red Wings’. But the brand has flown largely under the radar for the casual consumer. Perhaps their continued focus on the workwear market puts them out of the limelight. So what’s the deal with Thorogood? Here are some thoughts on the shoes, based on hands-on (or uh, feet-on) testing.

While I don’t own a pair of Red Wings for direct comparison, I can confidently say that Thorogood boots are comfortable, stylish and durable, and a worthwhile purchase for anyone shopping for work boots.

Thorogood makes quite a few different styles of boots, and the shoes I’ve owned for the past three or four years are the plain-toe 6″ boots without a steel-toe. If you’re more of a moc-toe enthusiast, the plain-toe boots are comparable to Thorogood’s 6″ moc-toes.

I can’t say for sure how many miles I’ve put on them, and while I’ve certainly not worn them every day or put them through working conditions, Thorogood boots are more than durable enough for the casual boot wearer. Does my pair look kinda beat up now? Yeah, but they’re work boots; scuffs and signs of wear are part of the appeal. 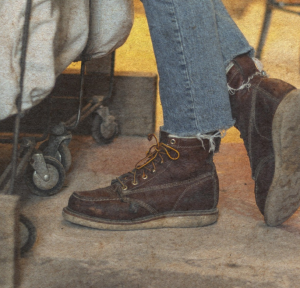 Many work boots are stiff and have a long break-in period. But Thorogood’s boots are very comfortable. The collar is cushioned to support the ankle, while the heel counter is structured in a way that conforms to the natural shape of the foot. The leather is soft but sturdy, and the boots are reasonably breathable. The toe box is comfortable and roomy as well. I can’t speak to the brand new break-in period, because I actually bought my Thorogood Boots second-hand. But at least in terms of breaking them in to fit my feet, it was a painless process.

Thorogood’s boots have a wedge sole that’s made from polyurethane and is known as their MaxWear wedge. It’s oil- and slip-resistant, meaning you can comfortably walk on any kind of ground, wet or dry, without worrying about slipping. And while I’ve never tried to wear them on a machine shop floor, the slip-resistance has come in handy in wet weather. Unsurprisingly, after years of wear, the backs of the soles have worn down somewhat. But they’re still a long way away from needing to be replaced.

The soles are attached to the shoes using a Goodyear storm-welt. As the name suggests, a storm-welt helps keep water from entering the shoes. The key detail that sets a Goodyear-welted shoe apart from other types of soles is that they can be re-soled. That means that once the wedge sole completely wears out, a skilled cobbler will be able to stitch a new sole onto the shoes. It’s not a cheap process, but it’s substantially less expensive (and wasteful) than just chucking your used shoes.

Thorogood’s 6″ moc-toe and plain-toe boots have seven eyelets. The three lowest ones are traditional punched eyelets, while the middle three are hooked eyelets, also known as speed hooks. The top is a punched eyelet, which you’re unlikely to use. The three speed hooks make it very easy to lace and unlace these boots. Plus, the sturdy leather pull tab adds an extra layer of convenience when pulling the boots on. The uppers are made from oil-tanned leather and the inside has a cotton drill lining. A fiberglass shank helps the shoe keep its shape. A Poron cushioned insole is included with Thorogood’s boots.

In terms of looks, Red Wing’s boots have a style edge. The extra stitching along the leather upper on the Thorogood boots arguably detracts from the clean look seen on Red Wing’s boots. Thorogood’s regular boots are also not waterproof, although Thorogood does sell waterproof versions of its popular boots. Thorogood’s boots are chrome-tanned, rather than vegetable-tanned, which is a mark against it for leather purists. Also unsurprisingly, the white wedge soles will attract a good deal of dirt; they won’t stay clean and white for very long. Like a lot of men’s boots, these tend to run slightly large. I’m normally a 10.5, but my Thorogood’s are a size 10. It’s a fairly minor gripe, but it’s something to be aware of.

Thorogood’s boots are union-made in the United States and tend to run roughly $40 to $60 less than Red Wing boots. The shoes have lasted me years, on top of however many miles the previous owner put on them. The leather uppers are soft and flexible, while the MaxWear wedge sole provides support and stability. If you’re looking for American-made boots and want comfort, style and quality, Thorogood should be on your radar and in your shopping cart. 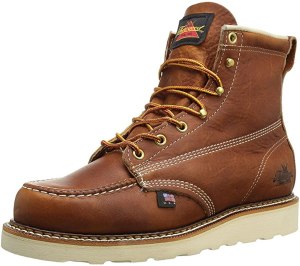 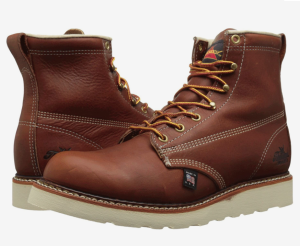 The Best Men’s Boots in 2021: Our Icons and Must-Knows