Star Wars is back and bigger than ever. Just recently, acclaimed director Ron Howard stepped in to direct the new Han Solo movies, making headlines. Just as before, the films’ wide reach in box office, news and all else is overflowing into many other sectors, including the fashion industry.

However, translating the imaginative, captivating genius of Star Wars into clothing hasn’t proved easy for brands, but we think Uniqlo (the pioneer of creative collaborations) has finally produced Star Wars clothing that lives up to its name. This new line of T-shirts has something for both movie fans and fashion enthusiasts alike, and we identified these 6 as the best of the bunch.

This T-shirt depicts the franchise’s main droids, R2D2 and C3PO, standing large on a shaded background. This T-shirt also has a hidden reflective feature when lit-up in the dark. 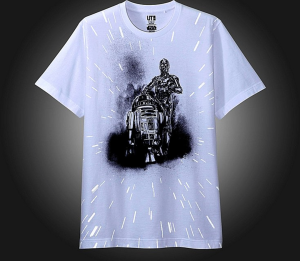 This white T-shirt, illustrated by Geoff McFetridge, shows a group of stormtroopers on the front above a small Star Wars logo, and a small stormtrooper helmet on the sleeve. 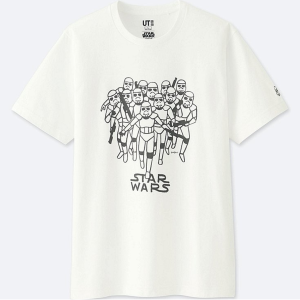 By artist James Jarvis, this black T-shirt shows an X-wing fighter and his signature little man exclaiming, “look at the size of that thing!” 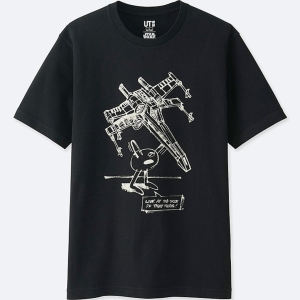 This Geoff McFetridge black T-shirt shows a small Darth Vader helmet on the shirt pocket, and features two tiny fighters on the back near the hem. An apt choice for the sci-fi minimalist. 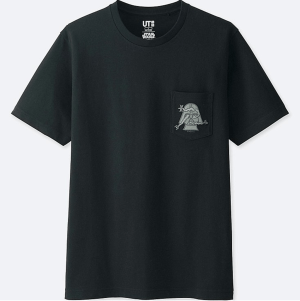 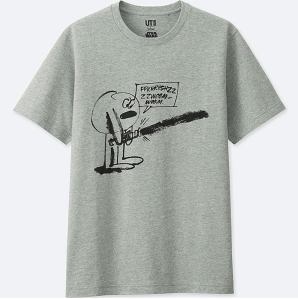 Also by Geoff McFetridge, this white T-shirt shows a simple hand-drawn Darth Vader looking up at whoever you’re talking to. It’s a simple, straight-forward yet bold graphic tee. 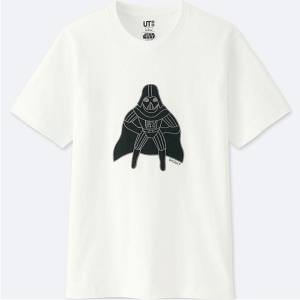