If you’ve ever wondered what Led Zeppelin fans like to wear on their feet, we may just have an answer for you.

From Rolling Stone:
Two iconic brands are teaming up for a special collaboration that may make more sense than you think. Vans and Led Zeppelin are dropping a limited-edition collection of footwear and apparel today, to mark the 50th anniversary of the British band’s self-titled debut album.

Released in January of 1969, Led Zeppelin was produced by Jimmy Page and reportedly recorded in a matter of days due to the then-unknown band’s lack of finances. Though it wasn’t an immediate hit, the nine-track LP would go on to become a classic rock album lauded by both fans and critics alike. (Our editors ranked it at Number 29 in Rolling Stone’s list of the 500 Greatest Albums of All Time)

While some have questioned the logic behind the new collaboration, both Vans and Led Zeppelin were seen as game-changers in their respective industries. Founded in 1966, Vans helped to usher in the counter-culture generation of the 60s and 70s, as part of the skateboarding and surfing scene in California. Led Zeppelin, meantime, was part of a new wave of bands that experimented with heavier sounds and influences in the 1970s, mixing the melodic phrasing of blues and rock, with the wailing and distortion of metal and psychedelia (re-visit some of their best songs and albums here). 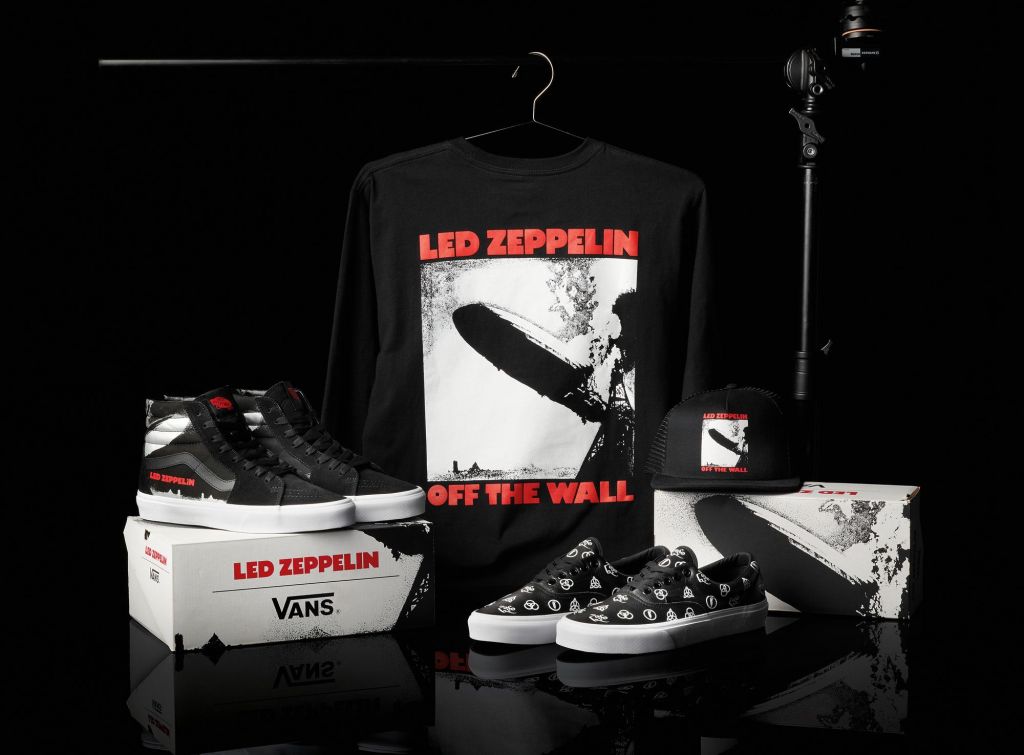 The four-piece Vans x Led Zeppelin Collection celebrates the band’s legacy with two pairs of specially-designed shoes, a graphic tee and a hat. The classic Vans “Era” sneakers are re-imagined with the band members’ individual logos and motifs stamped on the black leather upper. The “Sk8-Hi,” meantime, features Zeppelin album art printed along the side panels of suede and leather high-tops. Both pairs of shoes come with a custom Vans x Led Zeppelin shoebox.

Two apparel pieces are also available: a long-sleeve T-shirt with the original album artwork printed on the front, and an adjustable trucker hat, also printed with the album art – which depicts the Hindenburg airship disaster from 1937.

The Vans collection isn’t the only collaboration Led Zeppelin released for its 50th anniversary. The band also partnered up with outdoor retailer Burton on a limited-edition “Misty Mountain Hop” snowboard, inspired by the Zeppelin song of the same name. The snowboard sold out almost immediately upon release last month, though units are still available on eBay.

As for the Vans collaboration, you can shop the footwear and apparel beginning today on Vans.com.

This article was republished with the permission of Rolling Stone. To read the full article, click here.