Fashion trends come and go like the seasons, and some, like men’s rompers, are seemingly more ridiculous than others. It’s one of the most polarizing trends to hit the men’s fashion world in recent memory, and we’re here to explore what happened to them, why they fizzed out of the spotlight and where you can still buy men’s rompers today. In order to understand the curve of the brief men’s rompers trend, we’re going to explore:

Just a few summers ago, men’s rompers were the hot topic in men’s fashion. People couldn’t stop talking about the latest fad to make a resurgence. But as quickly as the topic re-entered the conversation, it left.

So, what happened to men’s rompers?

The Rundown on Men’s Rompers

Rompers have been a popular choice in women’s fashion since the late-1940s and early-1950s. They did, however, fall off the map a bit, as many fashion trends tend to do, but made a major resurgence in the 1970s, and again around 2011 — where they have remained relevant to women’s style ever since.

But it may surprise you to learn that rompers have also been just as present in the men’s fashion world, too — tracing back to the terrycloth coveralls that were a popular choice in men’s leisurely fashion in the ’60s and ’70s. Just take a look at Agent 007 himself wearing this memorable romper

Now, when it comes to the discussion of rompers, it’s important to differentiate jumpsuits from rompers. While they share a similar coverall concept, jumpsuits are long sleeve tops connected to pants, and they’re traditionally constructed from a durable fabric to better suit the needs of the industrial workers who traditionally wore them. On the other hand, a romper is a short sleeve top connected to shorts — usually very short shorts — and they’re typically made from a much lighter fabric better suited for summerly leisure activities than hard labor.

Romper’s for guys completely fell off the radar for a few decades only to make a comeback on overseas fashion runways in 2015. But it was one company, just a few short years later, that catapulted men’s rompers back into the western cultural lexicon.

In the spring of 2017, a startup by the name of RompHim launched a Kickstarter campaign to fund a line cun and colorful men’s rompers. Their mission was to create something that served both style and comfort, and as major news outlets and popular blogs everywhere caught wind of the fashion-forward company, rompers for guys exploded into viral notoriety.

Within three days of launching the RompHim Kickstarter campaign, the company had raised more than $330,000. Not bad, especially considering that the campaign only had a goal of $10,000. Marketed towards confident fellas looking to wear something bold and unique during their summertime adventures, the male romper garnered viral attention as social media feeds flooded with pictures of confident guys wearing their brightly colored rompers at the beach, outdoor BBQs and music festivals. The male romper was now center stage.

At a time when fashion designers and millennials were eagerly breaking down gender norms, the time seemed ripe for the male romper to make a comeback.

As numerous competitors popped-up in the e-commerce sphere and internet search results for “romphim” soared, the popularity of men’s rompers hit a peak in 2017. But the viral buzz surrounding the flashy product quickly lost its shine. Google Trends report shows a huge spike in attention in 2017, but not the kind of sustained interest that could lead to a sustainable market.

In February 2020, just three years after resurrecting the larger conversation on men’s rompers, the founders of Romphim, Webster-Clark, Chip Longenecker, Elaine Chen and Alex Neumann, announced they were shutting down to focus on other endeavors. And just like that, Romphim was officially dead.

The new iteration of men’s rompers, as popularized by RompHim, relied heavily on bright colors and bold patterns. It was as if someone took your uncle’s tacky Hawaiian shirt and attached matching shorts to it — making the fashion piece more of a novelty item than something you would actually want to wear on a regular basis.

“The romper [was] too bold of a trend to stick around long term,” said personal stylist Cassandra Sethi, founder of the NYC-based company Next Level Wardrobe. Sure, the recent romper movement was enough to capture viral traction —which is almost always short-lived at best, and it might be fun to wear at a summer event one time, but is that enough to justify longevity?

When it comes to taking fashion risks, it can be a rather “nerve-wracking” experience, notes Sethi. “Most guys want to take ‘baby steps’ when it comes to trying something new with their style.” It’s with this thinking that perhaps the world as a whole just wasn’t ready for the male romper 2.0 to stick around. While you might not find male rompers on clothing racks everywhere, you shouldn’t count out the deep corners of niche web-markets. For men who still want to show off their confidence with a gender-neutral fashion statement, there are still rompers for men for sale today.

One of the most recognizable male romper brands around today, RomperJack, is still producing strong revenue. They craft a more fitted romper and target the LGBT community as their main demographic. In June of 2019, shortly after Romphim announced they were closing, Justin Clark, the founder of RomperJack, reported that they were producing $60,000 in revenue per month. It appears that the mainstream thriving buzz behind the men’s romper may be behind us… at least for now. But that doesn’t mean that rompers for guys have been wiped off the face of the earth entirely.

Where Can I Still Buy a Men’s Romper?

There are still plenty of places that sell the men’s romper. Amazon and other trend-focused fashion sites, such as ASOS or Boohoo, have a few options to choose from. So, if you’re still inclined to throw a romper or two in the good ‘ole digital shopping cart, you can find three of the top-rated men’s rompers from Amazon and Romper Jack below.

The male romper line by Zesties features over a dozen bold patterns to choose from. Designs range from purple palm trees with a teal background to vibrantly-colored exotic plants, and even a patriotic American flag. This romper is made from a cotton/spandex blend and boasts an elastic waist to fit your size comfortably. Plus, it also includes a zipper fly, so you don’t have to completely strip just to do your business.

The Aideaone Men’s Romper is crafted from a super soft blend of spandex, cotton and polyamide, for ultimate comfort. The graphic print rompers are available in over a dozen designs, from pride rainbow to sunset palm trees. Plus, with the frontal zipper, there is no need to fuss with buttons.

This fun floral romper from Romper Jack is the perfect summer look for the modern gentleman who wants to make a fashion statement during his leisure hours. It features a slim-fit design and is made from 100% polyester. 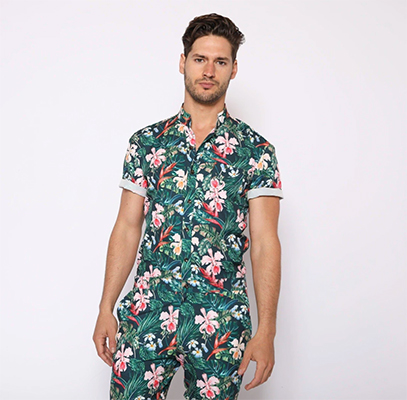 UNIFACO is another men’s romper brand with a fun set of prints that range from dinosaurs in outer space to tropical flamingos. It has a front zipper for convenience and features two side pockets for storing all of your most pressing items. It’s made of a breathable blend of spandex and cotton that will keep you covered and cool no matter what occasion you decide to rock this outfit for. It has a round neck for comfort and an elastic waistband that can accommodate a range of body types.

These men’s rompers have long-lasting patterns that won’t fade, crack or peel even after a romp around in the sun at your favorite festival. It has a zipper neck, knee-length pants and two pockets for easy storage. It also has an elastic waistband in the middle that hugs your frame but is stretchy and comfortable at the same time. Hand wash and hand dry for best results.

Lastly, we love this trippy geometric design that’s bright, colorful and made of breathable material. It has a premium metal zipper that’s reliable for closing and opening as well as grandad collar that won’t irritate your skin. The cargo shorts on the bottom are knee length so you won’t show more skin than you want to and with two deep side pockets for storage it’s a practice choice too. Plus, this brand is machine-washable so caring and cleaning is easy.

It’s Only Cool Vibes With These 8 Stylish Bandanas