When Harry Met Sally is technically a winter movie; there’s snow, they buy a Christmas tree, and they go to a New Year’s Eve party. But despite these facts, When Harry Met Sally is spiritually an autumn movie. Watching it feels like pulling on a cozy sweater for the first time after the leaves start to turn and the air starts to cool. And if there’s anyone that knows about cozy sweaters, it’s Harry Burns, as portrayed by Billy Crystal. With the fall equinox finally arriving this upcoming Thursday, we’re feeling ready to swaddle ourselves in cozy cable knits and fleece sweatshirts.

If there was any doubt at all, let’s settle it. Billy Crystal is a bona fide style icon in When Harry Met Sally. Billy Crystal might seem like an unlikely candidate for style icon status, but we’re far from the only ones that feel this way. What makes him so stylish is that he looks comfortable in his clothes; the shirt sleeves are rolled up, the white sneakers are slightly scuffed, and he’s pretty much always wearing the same pair of straight-cut mid-wash jeans. It might not sound like the most stylish combination, but he looks great because he never seems to be trying too hard. As menswear obsessives, that couldn’t be us, but we can at least strive to emulate the cozy-yet-cool looks Harry manages to pull off.

That’s why we’ve set out to replicate Billy Crystal’s signature sweater looks from the movie. It could work as a Halloween costume, but honestly, you can catch us dressed like this from now until summer ’23. 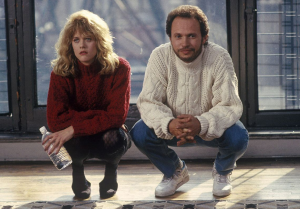 The style of sweater Harry wears in the movie is a cable knit, or more specifically an Aran knit. These sweaters share their namesake with islands of the coast of Ireland, where fishermen needed hardy, insulating knitwear to brave brutal conditions. Harry’s style is a mock neck, which is longer than a crew neck but shorter than a turtleneck. A mock neck in cream is surprisingly hard to find, but LL Bean’s fisherman sweater nails most of the other details, including the thick fabric, color and intricate weave. 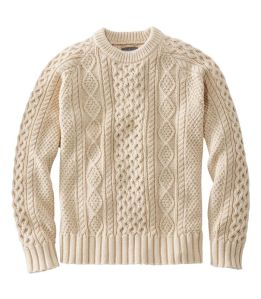 A pair of stonewash 501s is an 80s classic, and Levi’s has been making them the same way for decades. Straight-cut stonewash can be kind of hard to pull off, so a more modern take would be the Levi’s 502, a slightly tapered style in a relaxed light wash.

Reebok’s Club C 85 shoes are packed with retro appeal and they look quite similar to the rounded white leather sneakers Harry wears in much of the movie. 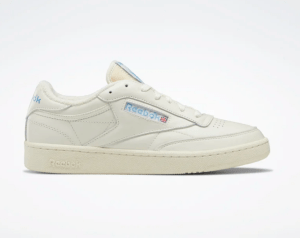 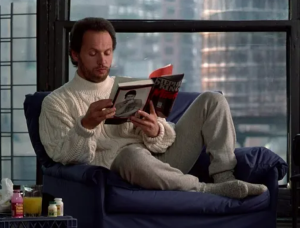 There are plenty of riffs on the Aran knit sweater, but you don’t need to be a seafaring Irishman to get your hands on the real deal. This one comes from the Aran Sweater Market and even arrives with a certificate of authenticity. It has a mock neck, like Harry’s, and is made from wool with a little cashmere blended in. 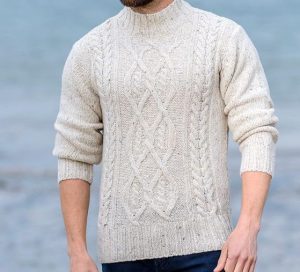 Heather gray sweats are a must, and Nike’s Club Fleece sweatpants perfectly nail the retro look. They have a fleece lining and are made from a blend of cotton and polyester. 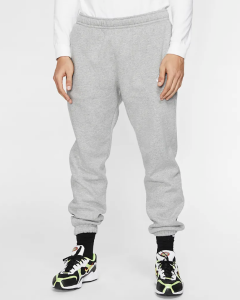 You can’t skip the socks. American Trench makes stylish socks inspired by classic sportswear, and these are made in the USA and have a neutral cream color that pairs perfectly with the sweatpants. 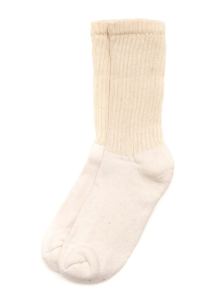