You can trace a line between so many sports and their contributions to footwear culture. Basketball shoes have long been a fixture of casual wear, with fans spending big bucks to rock their favorite player’s signature shoes. Skateboarding shoes — with a heavy lift from companies like Vans — are a staple of alternative music culture at this point. And white tennis shoes, with their sporty, retro look, mark a fashion classic influencing the styles of regular guys everywhere. Versatile and comfortable, white tennis shoes pair with pretty much every outfit, making them the perfect daily shoe.

There’s trendy and there’s timeless. And considering two of the biggest casual white tennis shoes — Adidas’ Stan Smith and Converse’s Jack Purcell — have been around for decades, this is surely the latter, a token of timeless fashion. Tennis shoes aren’t going anywhere. It’s time you picked up a pair.

But before we get any further, we have to touch on the “sneakers vs. tennis shoes” debate. When someone says “tennis shoes” you might be picturing a clean white pair of kicks for everyday use. If you’re an actual tennis player, “tennis shoes” probably means something a little different to you. The terms are often used interchangeably. So, for purposes of this article, we’ll list some of each — true tennis shoes with the traction and stability to help you make quick lateral movements in the heat of competition on the court, and casual sneakers inspired by the sport but meant for your everyday casual wardrobe. And if white isn’t necessarily your color, we’ve already sourced the best tennis shoes.

When shopping for on-court white tennis shoes, think about stability, traction, durability and comfort. You want a shoe that moves with you and can withstand the agile cuts and pivots required of the sport. You also want something that lasts. Cushioning and weight are factors to consider as well. Some folks like the increased support, while others want a closer feel to the ground. With weight, some prefer the speediness offered by a weightless shoe. Others want to feel some of the weight that accompanies a more stable shoe.

Regardless, the best way is to try on a pair to see what you like. With so many generous return policies these days, it’s not a bad idea to snag a few pairs online and test them out. This is also a good bet if you’re between sizes, too.

When it comes to casual white tennis shoes, function really isn’t as important, but you want something comfortable and durable, something that can withstand everyday use and not wear down. Pick the style that’s most true to your own fashion identity.

Asics already dominates the running shoe and wrestling shoe markets, so it’s no surprise that they’ve built one of the most popular tennis shoes as well. It’s the best overall here because, well, it nails all three key attributes — stability, durability and comfort. The eponymous GEL technology applied to the heel and midfoot helps absorb shock, while Asics’ DYNAWALL technology controls the stiffness of the sole for stability. The Gel Resolution kicks were developed with French tennis pro Gaël Monfils, whose elite athleticism and court coverage skills require a shoe that can keep up. 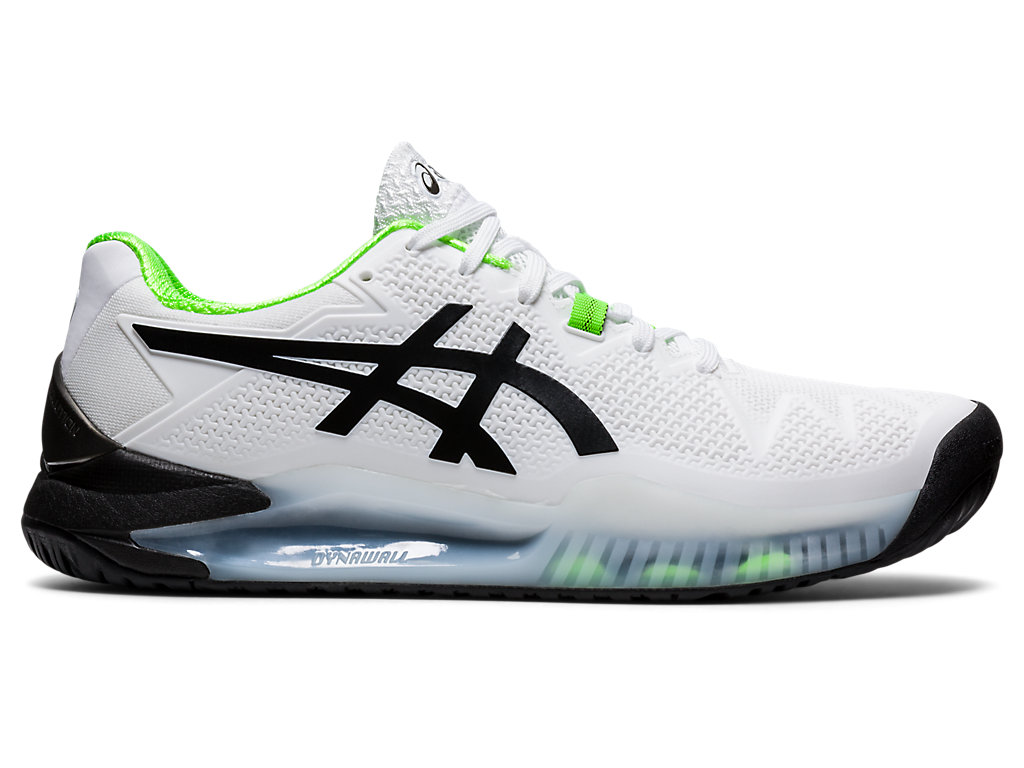 K-Swiss is practically synonymous with tennis — much of which can be attributed to its big marketing tactics and many collabs — offering styles for on and off the court. Its original Hypercourt Express was already known for its comfort and lightweight feel. The second iteration doubles down on this by adding Surgelite technology to its midsole, creating an even lighter shoe. These are a great choice right out of the box, as break-in time is minimal. We recommend these for the casual tennis player who prioritizes comfort above all else. And while we’re talking about K-Swiss, the Ultrashot 3 is one of our favorites, but remains elusive and frequently out of stock. If you can find a pair of those in your size, pounce. 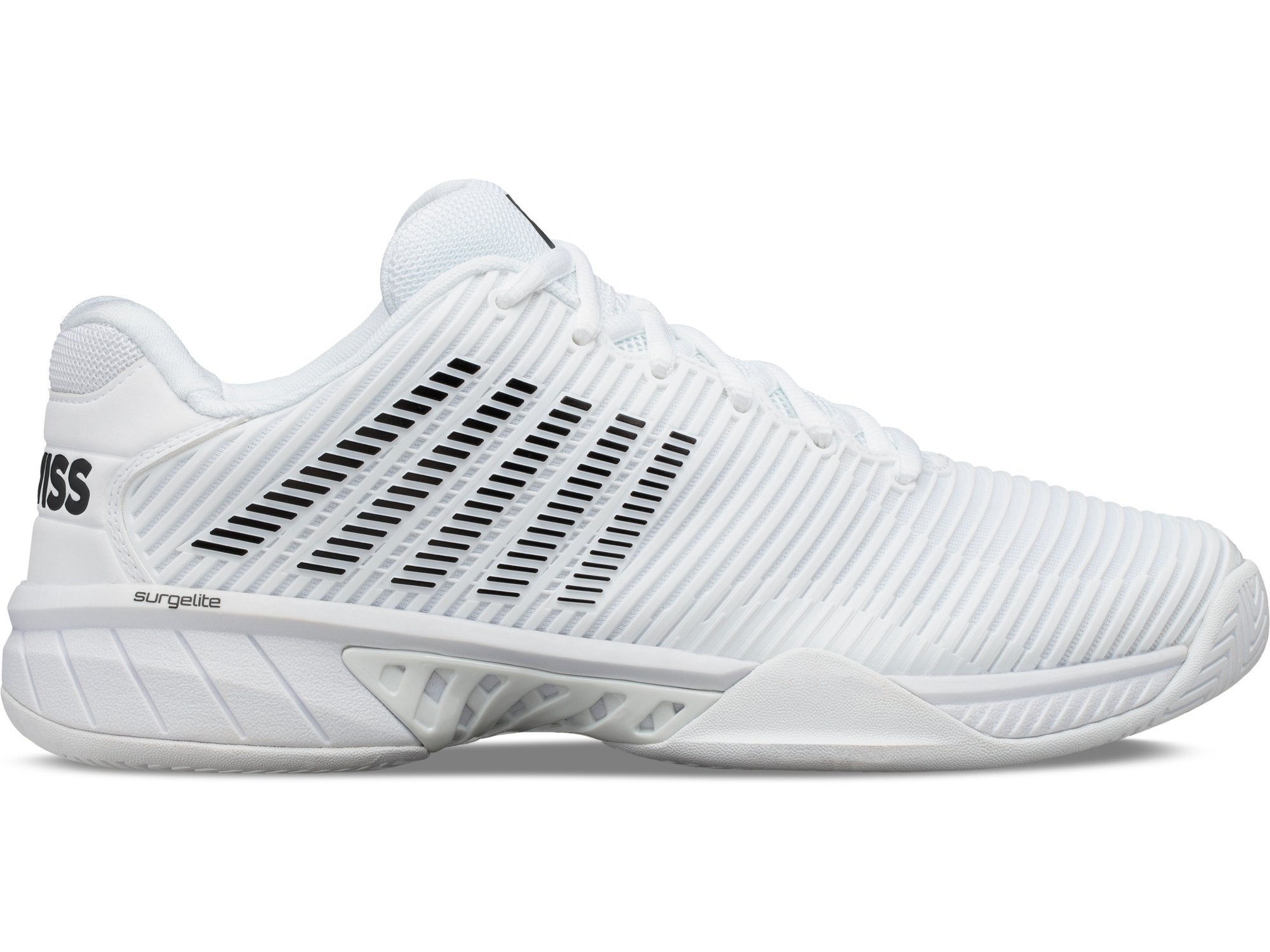 Leave it to Adidas to bring its signature swagger and weightless feel to the tennis shoe market. The Adizero Ubersonic 4 Tokyo consistently ranks as one of the most popular pairs of tennis shoes, and a particular favorite among those who prefer a speedy, lightweight feel on the court. Some players don’t like the lack of tongue — which is consistent with Adidas’ sock-like fit on many of its sneakers — but you really can’t argue with the neon orange color splashes and the iconic three stripe logo. You’ll fly on the court and earn major style points along the way. 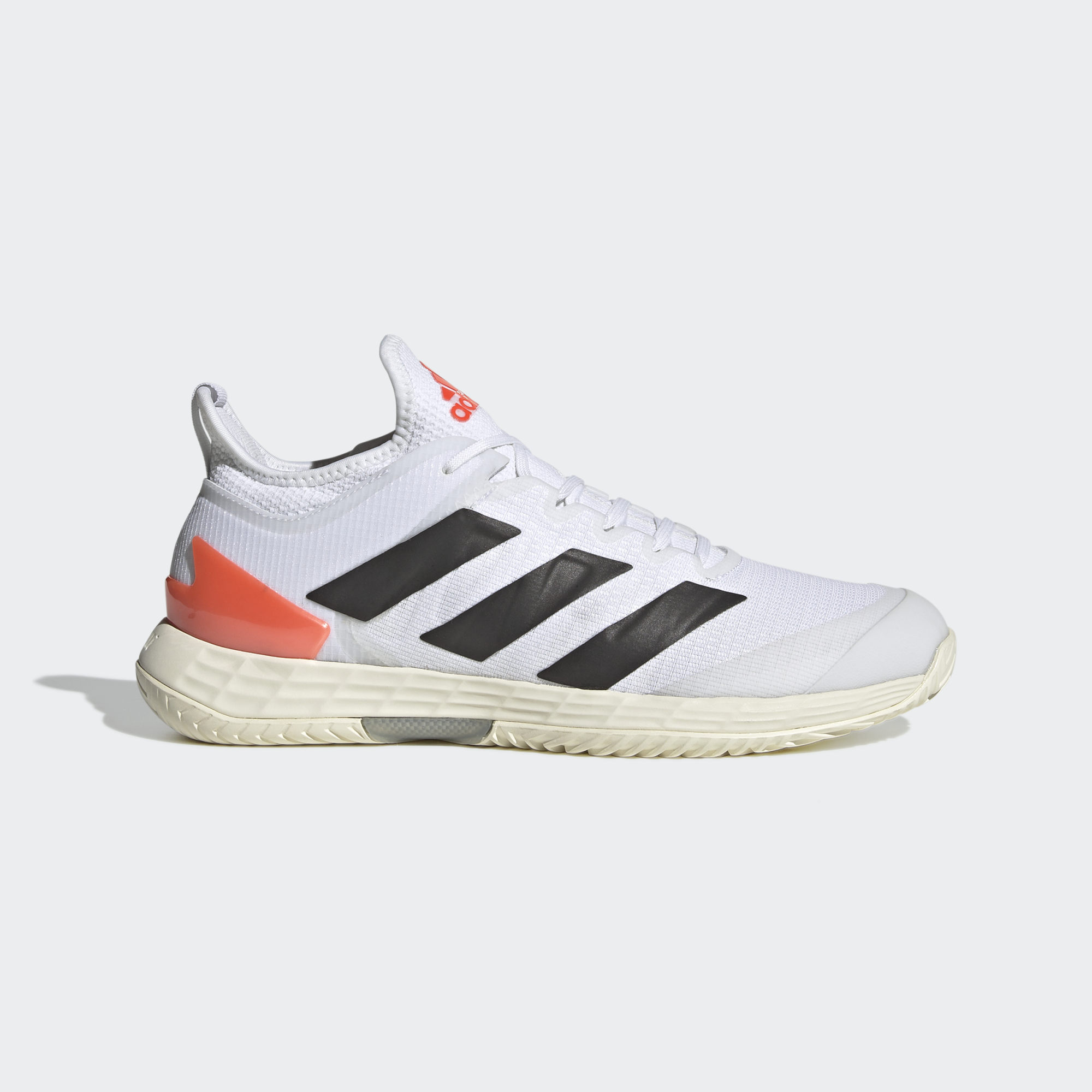 The original iteration of this sleek white tennis shoe dropped back in 2018 and was developed alongside Milos Raonic, one of the most successful Canadian singles male players in history. Of Serbian descent, Raonic is known for his killer serves, and was given the nickname Lav (Serbian for Lion) by his grandfather at a young age. That original Fresh Foam x Lav shoe — highly popular thanks to its cushioning and support — is in limited supply from most retailers. Thankfully, the second edition is brand new, having dropped in June 2021, and maintains the shoe’s foam cushioning feel, but adds a new focus on lateral stability. And while the original featured a handful of bold, neon colors, the V2 opts for a clean white look with New Balance’s contemporary N logo. 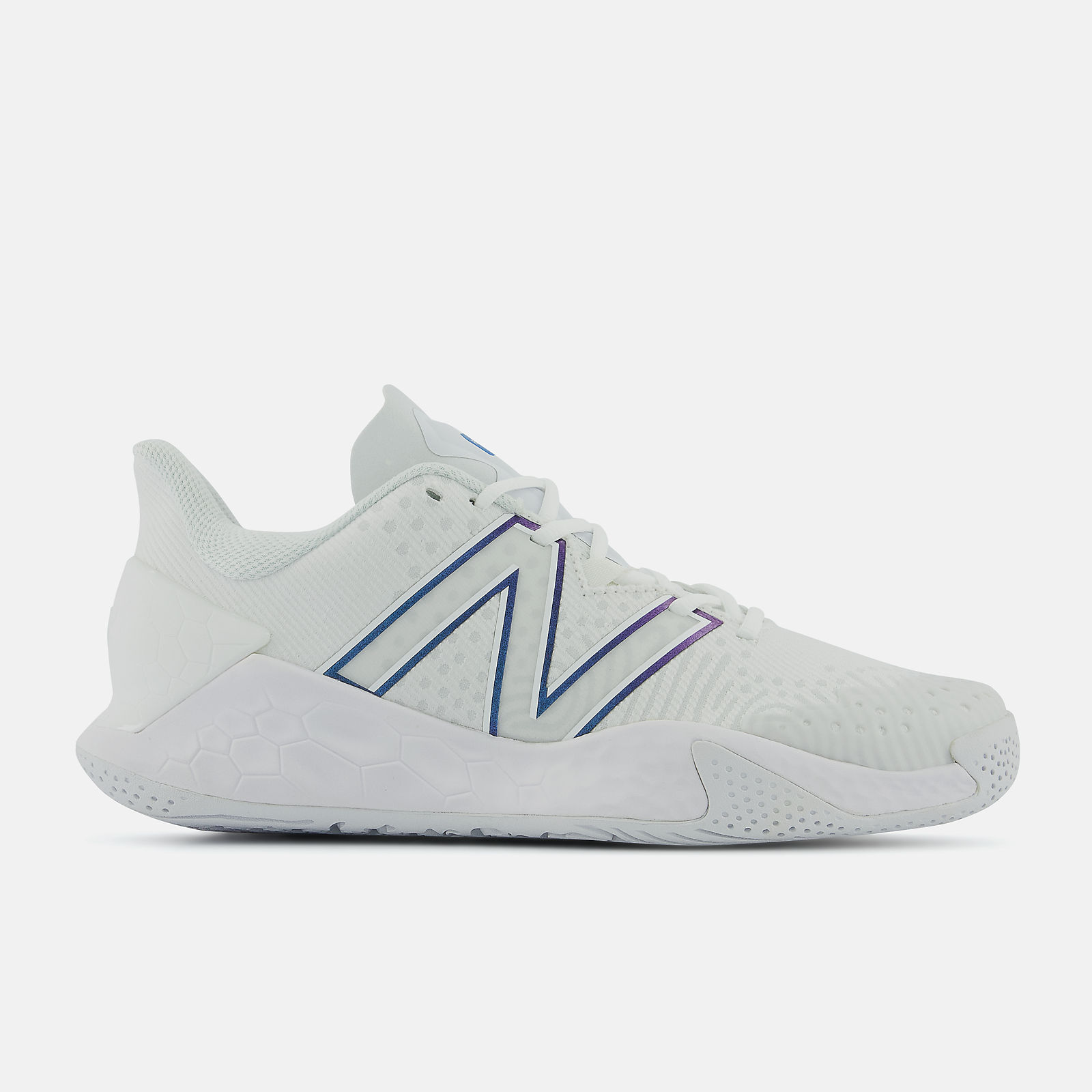 With all the back-and-forth lateral movements required of tennis, having a shoe that keeps you moving freely is key. The Air Zoom GP Turbo from Nike features a full-length Zoom Air unit stitched into the upper, creating a bouncy feel for agile, aggressive players on the court. Speaking of which, these kicks are a favorite of rising American tennis star Frances Tiafoe, whose deadly serves clock in around 140 mph. The Air Zoom GP Turbo is currently in low stock on Nike’s website, so we recommend checking out Tennis Warehouse for more inventory. 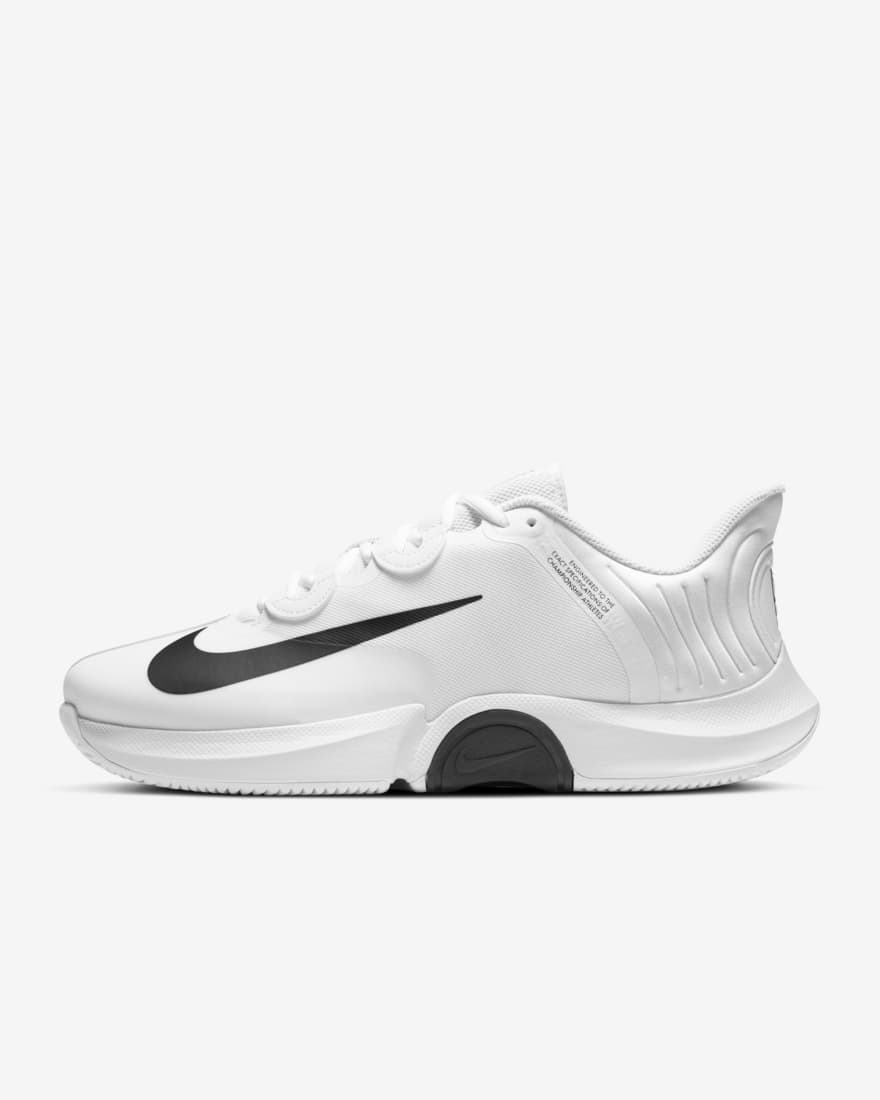 As you’ll start to notice, some of the best white tennis shoes come with a big name endorser. In this case, it’s Roger Federer, the 20-time Grand Slam champion who’s widely considered one of the greatest tennis players of all time. Federer and On — a Swiss shoe manufacturer known for its insanely lightweight running shoes — developed this Roger Centre Court sneaker, which captures on-court style for off-court wear. Staying consistent with On’s sustainability initiatives, the shoe incorporates recycled polyester and some vegan leather as well. Attaching Federer to this shoe definitely inflates the price, though, as the Roger Centre Court sneaker will run you just under $200. 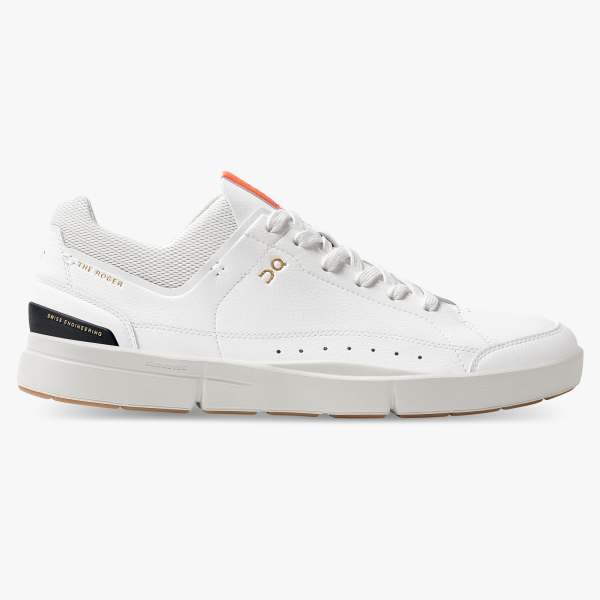 Courtesy of On Running

With “Crosscourt” in the name, it’s not hard to imagine where this Cole Haan shoe draws inspiration from. We love the clean, minimalist design on this 100% leather shoe, the only visible branding being the etched-in Cole Haan on the tongue. It’s the kind of sneaker with enough elegance to dress up and pair with a nice pair of slacks or even a suit if that’s your vibe. And at only $50, it’s easily the most affordable white tennis shoe on this list. 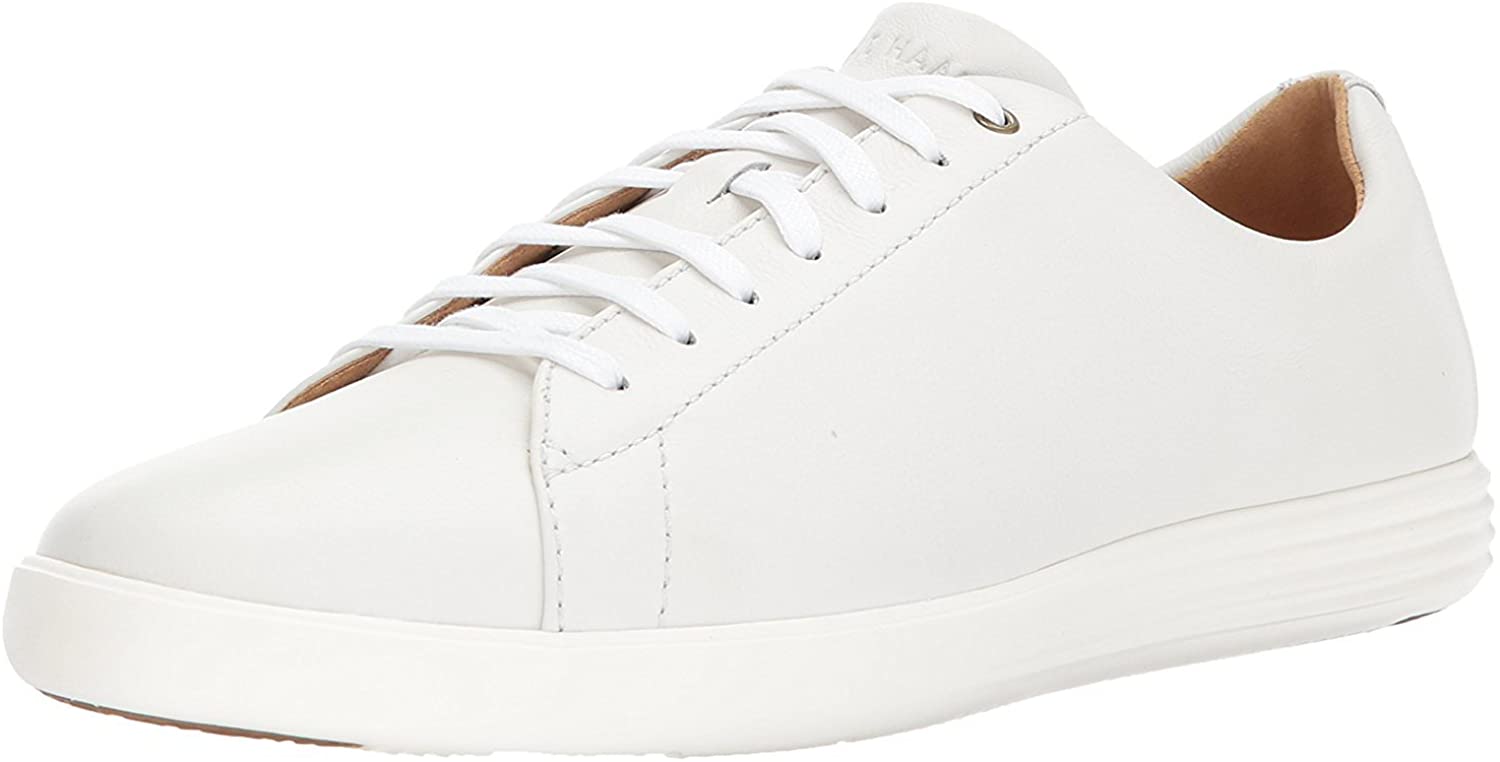 Leaning more into our tennis-inspired shoes, we have the Reebok Club C 85, which isn’t equipped for intense matches on the court. Instead, this is a great choice if you want to bring that tennis swag into your daily routine. These look great with your best denim, and pair nicely with shorts on hot summer days. When it comes to casual white tennis shoes for men, this is pretty much exactly what you want — a minimalist pair of kicks with subtle but stylish branding flourishes, like the iconic green Reebok logos on the heel, tongue and side. 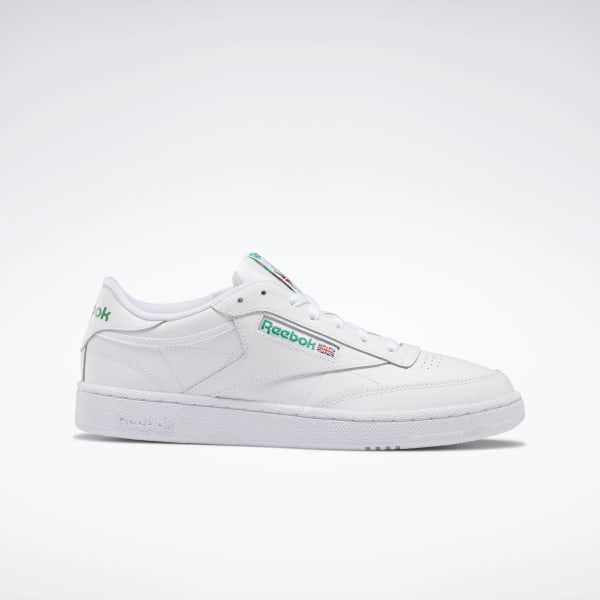 An iconic shoe company. A world champion badminton player. An elite menswear designer with a penchant for great collaborations. What do you get when you mix all three? A fantastic white tennis shoe. Converse has been producing its popular Jack Purcell for almost 50 years. Now, it’s partnering with Todd Snyder for a limited edition collab that stays true to the timeless original, but adds some of Todd Snyder’s signature rugged flair, including an organic cotton upper, recycle rubber sole, cork liner and suede tongue. 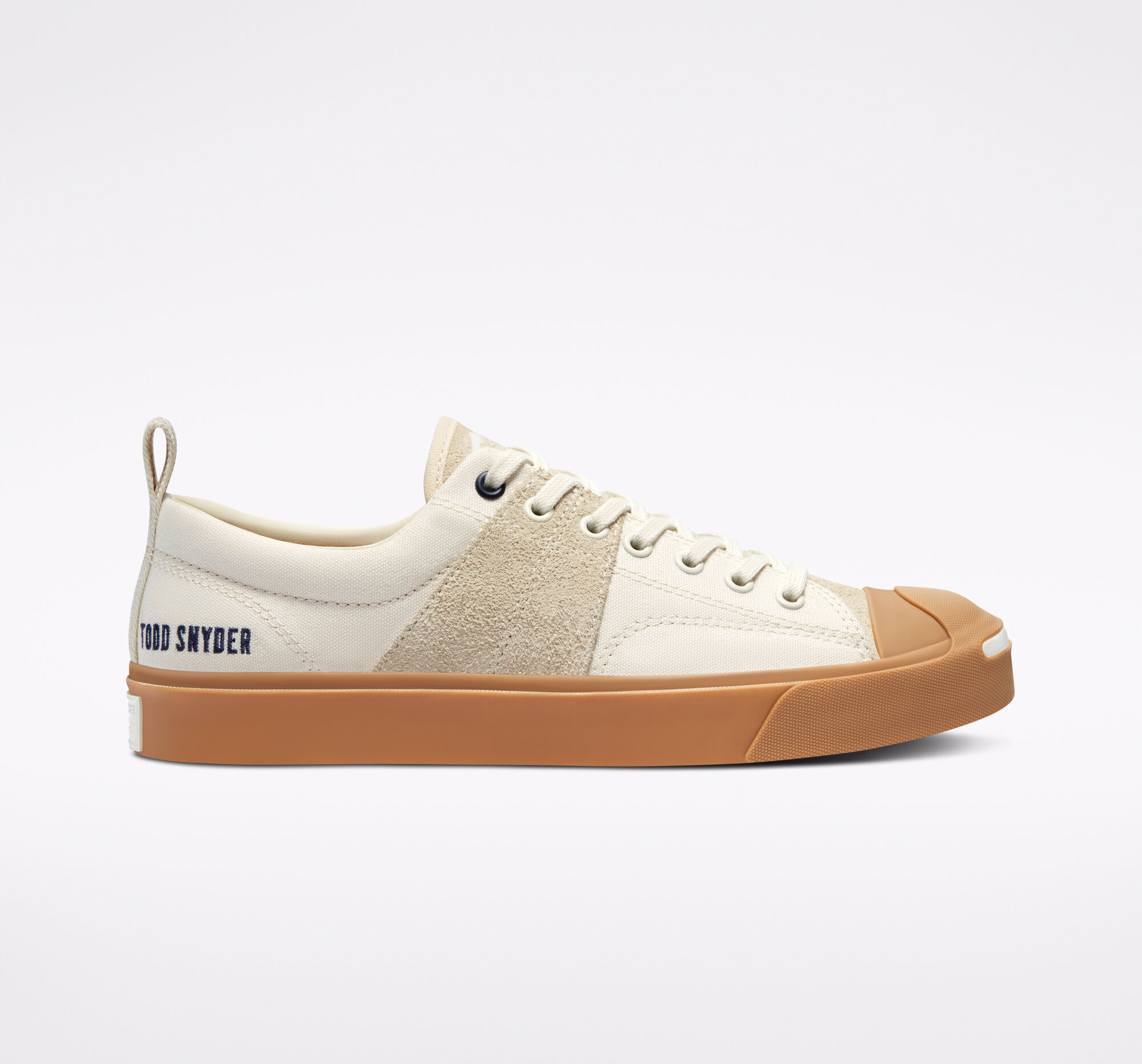 There is no list of tennis-inspired shoes without the Stan Smith. One of the most popular white sneakers on the market, it needs little introduction. But, to refresh our memory on the name behind the shoe, Stan Smith was a No. 1 tennis player who won two Grand Slam titles in the early 1970s. Adidas began producing his signature shoe in 1978, though it’s best served for outfits off the court, as it’s really not intended for fierce competition. Still, it is the white tennis shoe — a timeless classic with universal appeal and style. 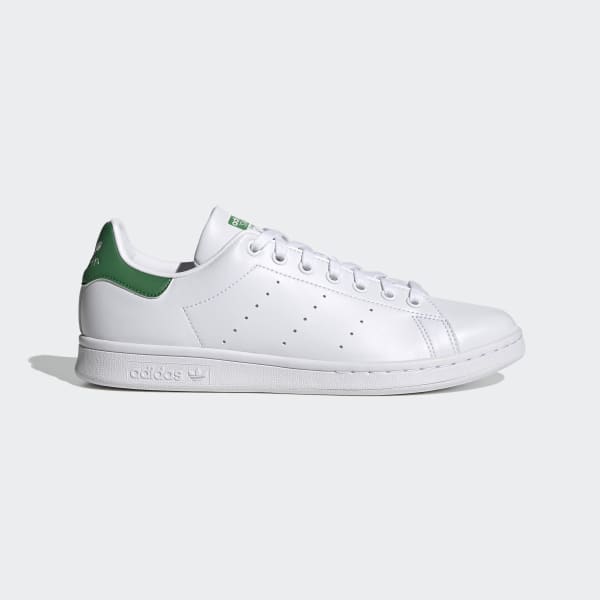 One Great Home Gym Can Fulfill 99% of Your Exercise Needs