Like most of 2020’s holidays, last year’s Halloween was a bust, with the pandemic canceling parties and trick or treating. Now that millions of Halloween lovers are vaxxed and ready to safely boo-gie, Halloween 2021 will be the long-awaited redo that scary movie lovers have been waiting for since 2019. That also means it’s time to start planning your Halloween costume, and one of the easiest ways to finish off a look is with a Halloween wig.

Wigs are an inexpensive and easy way to complete a costume and can also be the jumping-off point for years when you’re not sure what you want to be on October 31. Get some inspiration from a 1980s mullet, a long hair and beard combo, or a wig inspired by a famous scary movie character or comic book hero.

Whether you’re opting for the scariest costume on the block, an outfit that will match your kids’ costumes, or you still need some ideas, these Halloween wigs are a great addition to any spooky costume. Just don’t forget the Halloween candy.

Whether you’ve always dreamed of being Slash from Guns ‘N’ Roses or simply want to live our your long-hair fantasies, this wig is a great addition to any Halloween costume. Grab your acid-wash jeans, your favorite band t-shirts that you refuse to throw out, and your chain wallet for a costume that is essentially a time machine. Now if only beer and cover charges at bars were the same prices as they were in 1989. 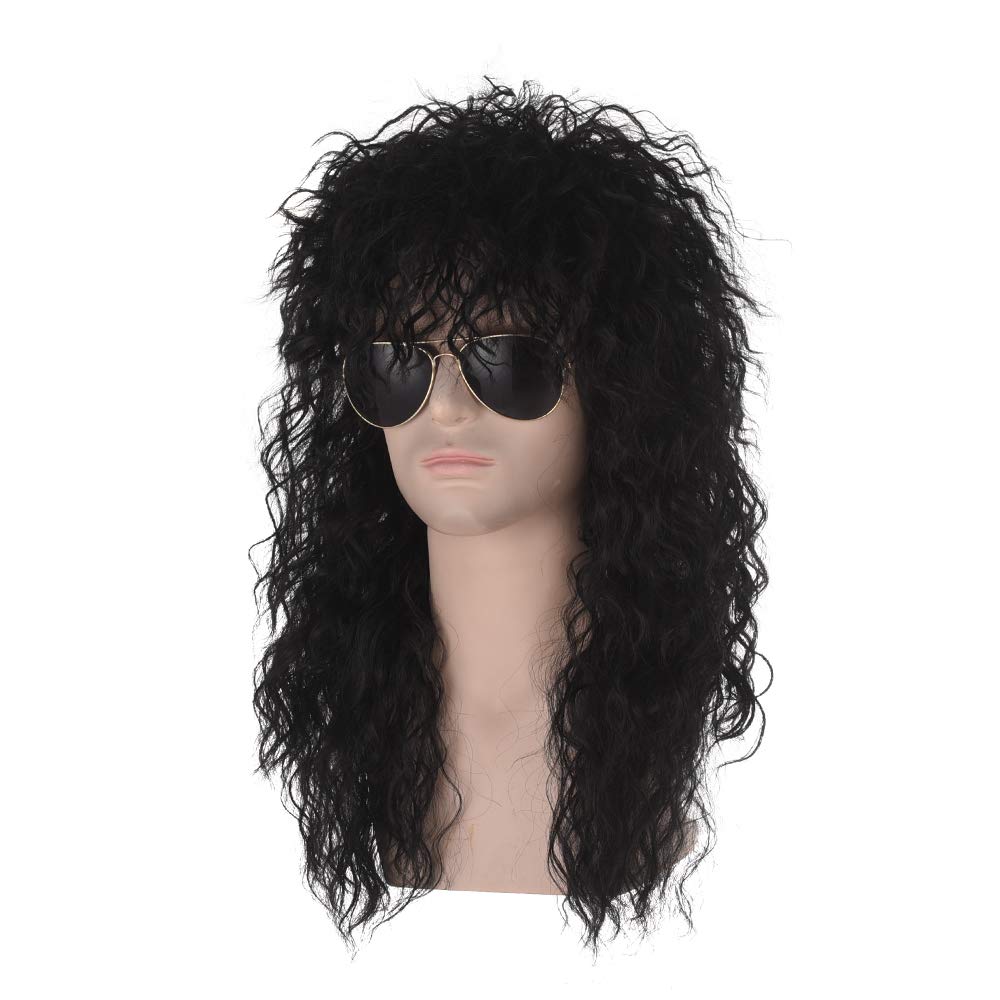 If you like big cats and hate your competitors, this Tiger King-inspired wig is for you. Pair this blonde mullet wig with a love for felines, a disdain for rules, and a penchant for questionable home videos to create the Halloween costume that you wanted to wear in 2020 but couldn’t because everyone was staying home to re-binge Tiger King and couldn’t leave the house. 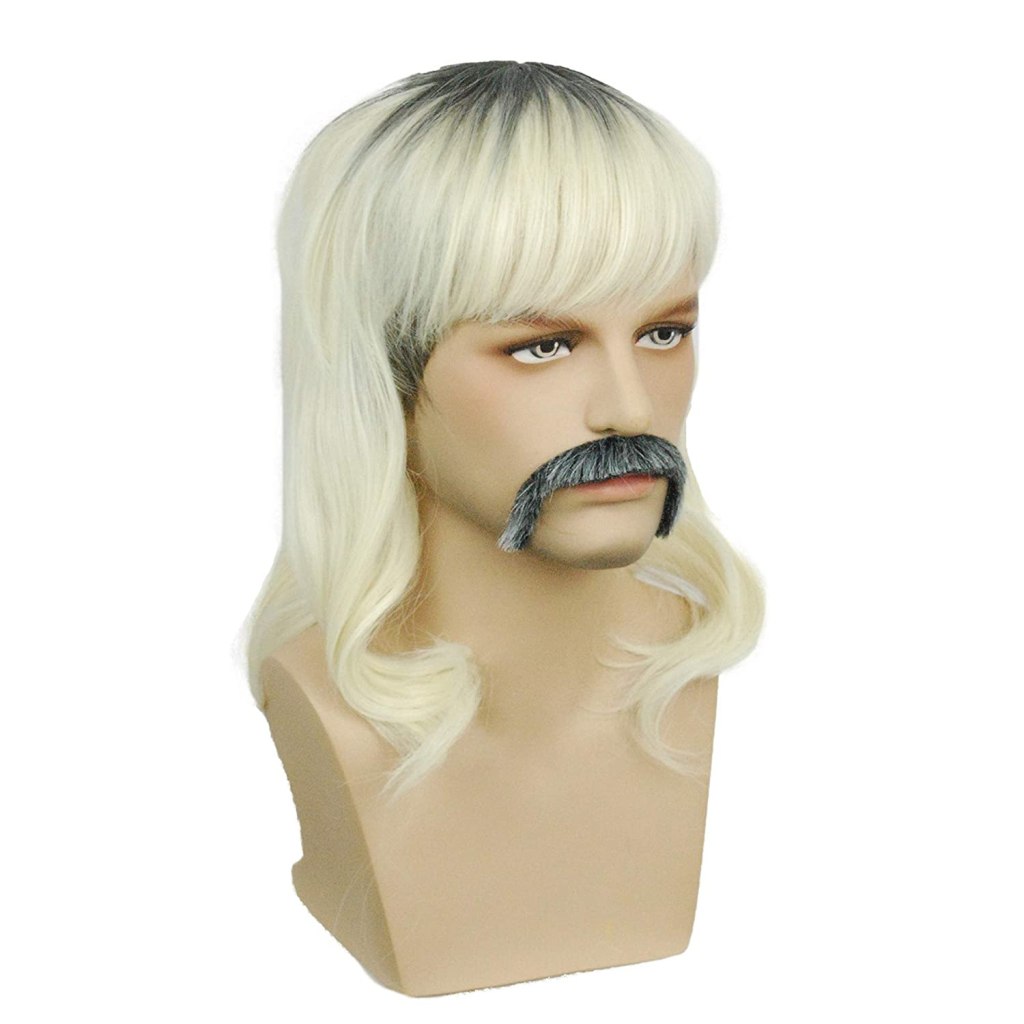 Good news – not only does the Smiffy’s Men’s Mullet Wig mean you don’t have to spend a year growing your hair for a Halloween costume, but it also comes in five colors. You don’t want to pick the wrong shade and look ridiculous, right? For a “party in the back, business in the front” ode to Billy Ray Cyrus, Blake Shelton, and everyone else who loves to straddle the line between long and short, this mullet wig is the perfect fit. 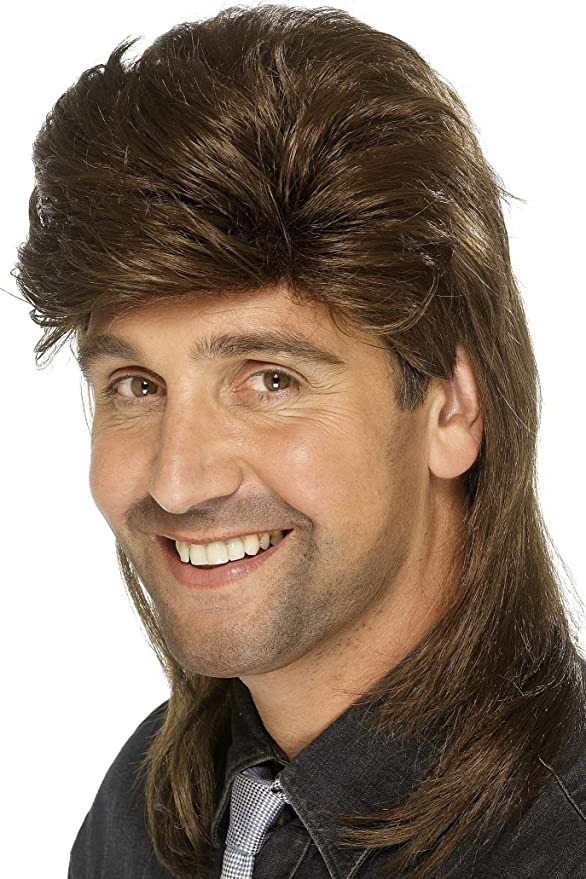 Ahoy Matey! Thinking about being a pirate this Halloween? You’re definitely going to need this Halloween wig. It comes complete with dreadlocks, a bandana, and beaded fringe. Made in a one size fits all fit, it’s great for both women and men looking to find treasure this Halloween season. 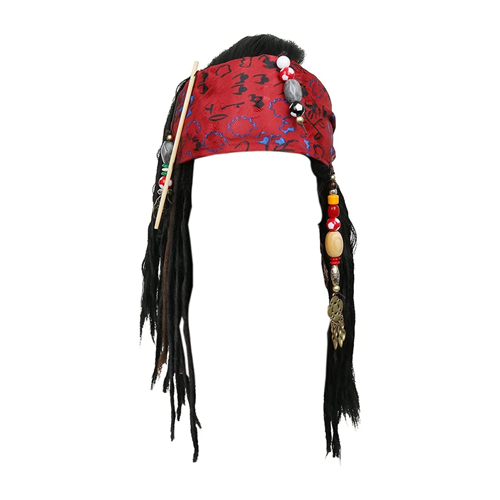 We’re still not quite sure who the audience was for Disney’s live-action Cruella film, but we do know that Emma Stone was casually cruel and cool in the revenge flick. Natural black-and-white hair would take hours in the salon and weekly touch-ups, but with the Cying Lin wig, you can turn yourself into a fashion designer with a penchant for pups in seconds. That means more time to practice your English accent. 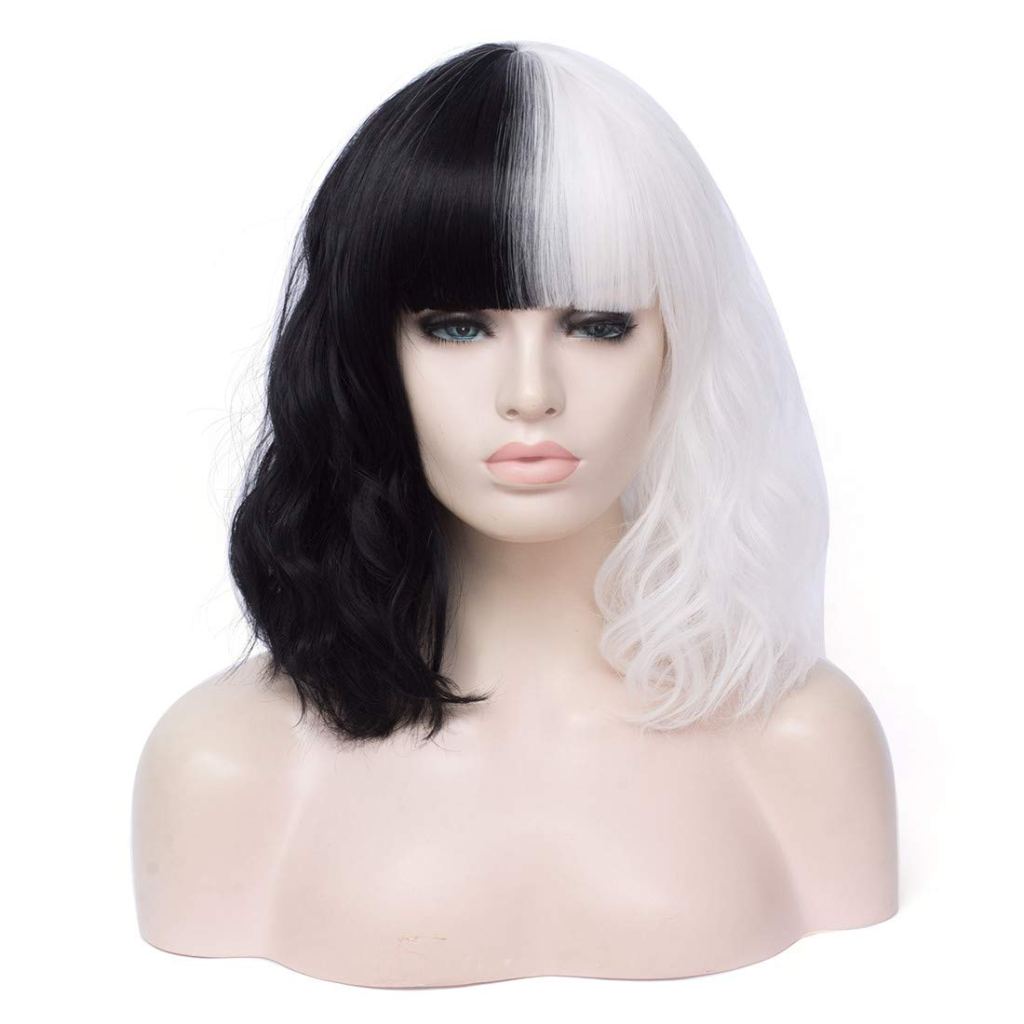 Made of high-quality human hair, this afro wig will allow you to transform into some of your favorite celebs and characters including Prince, Michael Jackson, Jimi Hendrix, Questlove, Samuel L Jackson in Pulp Fiction, and more. 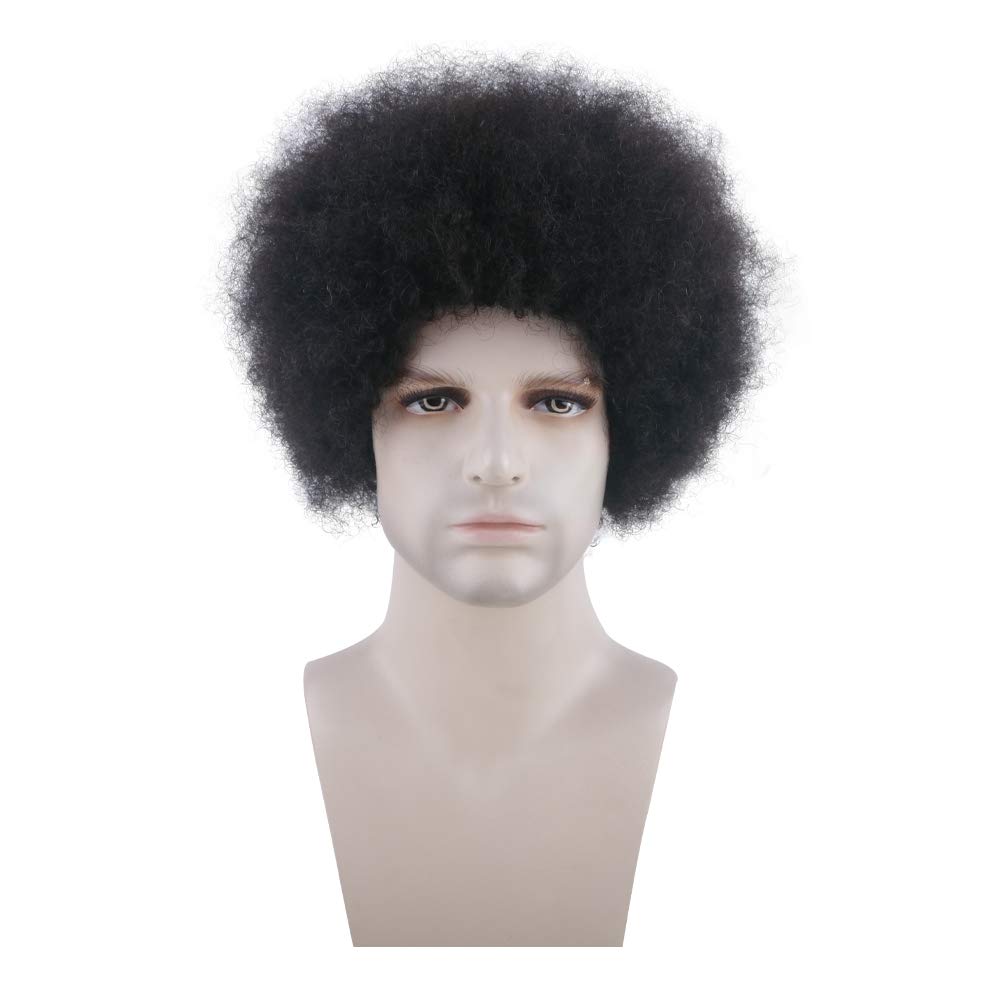 Sebastian Stan and Lily James are preparing to do their best Tommy Lee and Pamela Anderson for the upcoming Hulu series based on the rocky relationship of the musician and actor. Get ahead of the pop-culture curve this Halloween with an ode to the Mötley Crüe drummer thanks to this shaggy black wig. Now you just need to find your Pam. 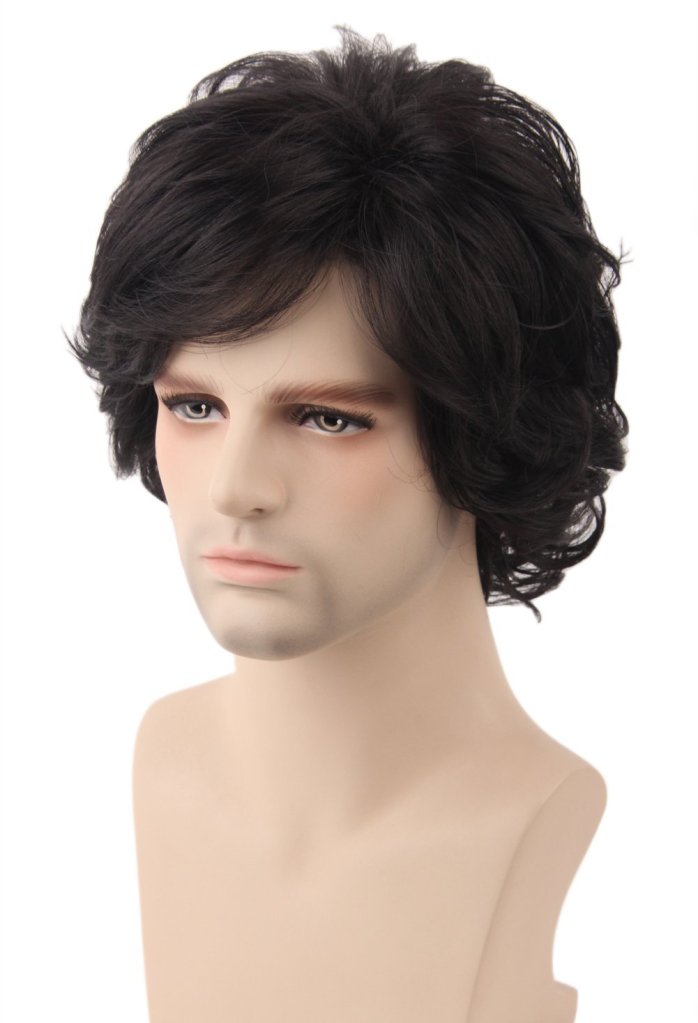 Still not sure who or what you want to be for Halloween? If you’re deciding between Jim Morrison, Howard Stern, and Kenny G, we have the wig for you. The Fantalook Short Curly Brown Halloween Cosplay Wig for Men lends itself to several costumes while also giving you the mane of your dreams. Plus, you don’t have to worry about humidity ruining your curls since, well, they’re fake. 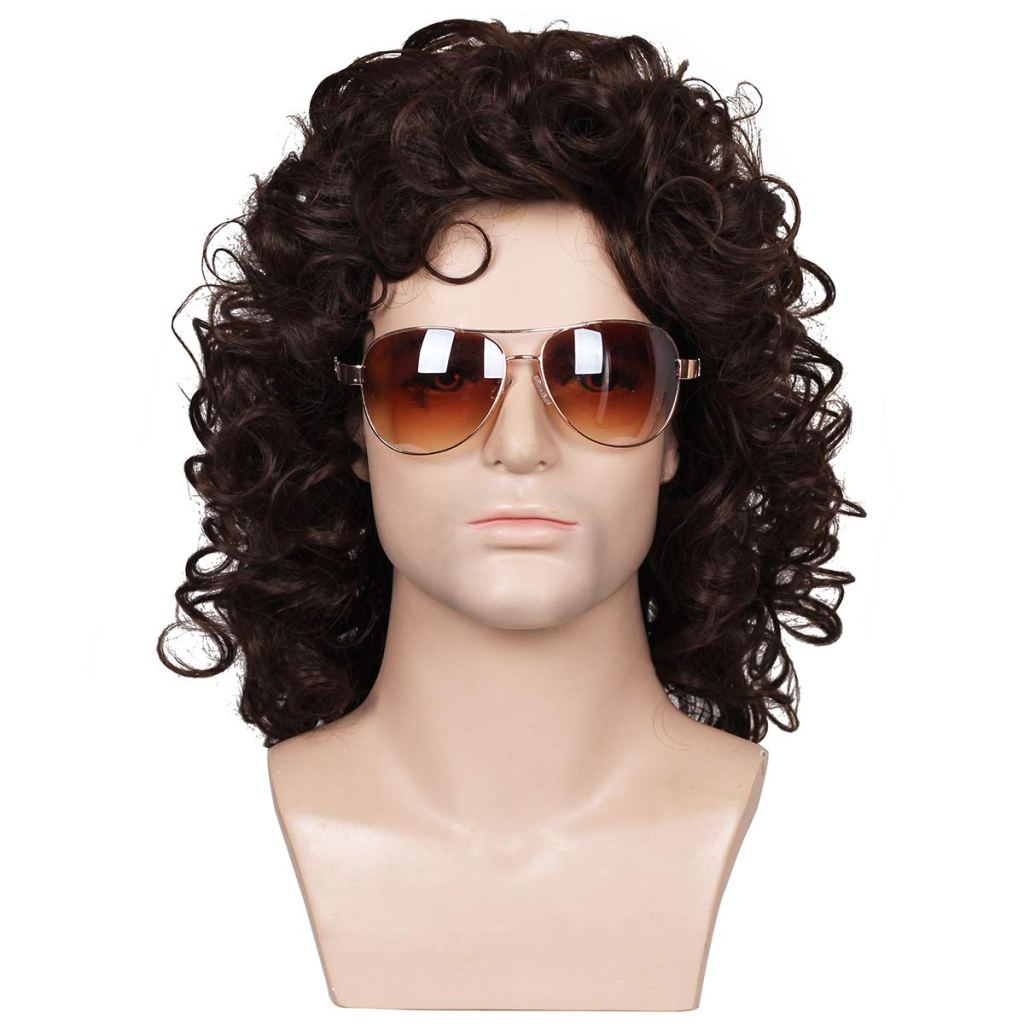 Still deciding whether to be Bob Ross or Richard Simmons for Halloween? Don’t paint yourself into a corner (with happy trees) by waiting until the last minute to order a wig that works for both costumes. The Fluffy Afro Synthetic Clown Wig for Men is available in a huge range of colors, including a rainbow pattern, and is made with high-temperature fiber and breathable mesh that will be comfortable even if you spend Halloween sweatin’ to the oldies. 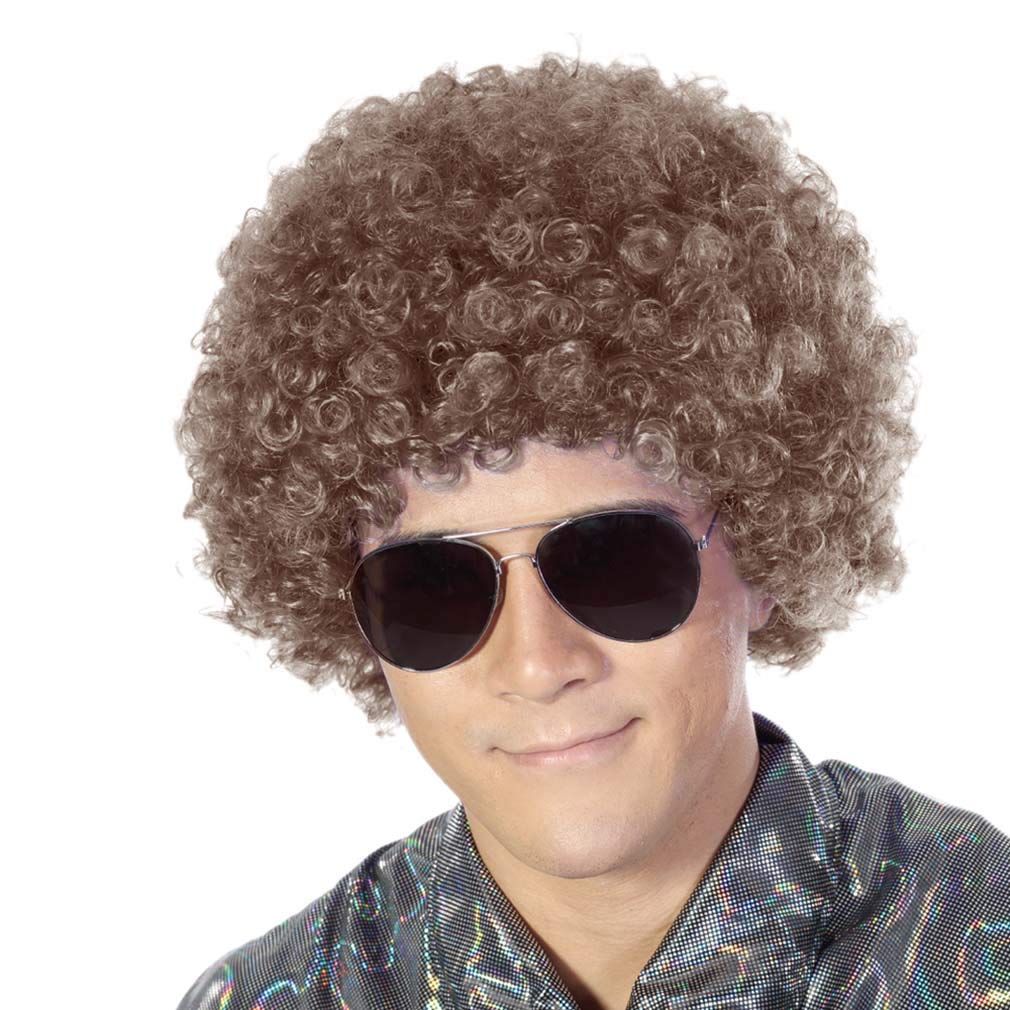 Halloween is all just a bunch of hocus pocus, so why not pay homage to one of the best family-friendly scary movies with a costume ode to the deliciously devilish Winifred Sanderson? The Sanderson sisters are coming back for another Hocus Pocus film in 2022, so let’s get the celebration started early this Halloween. We don’t mean by terrorizing children and looking for virgins to light candles — just quote the movie and have a rewatch party or something harmless. 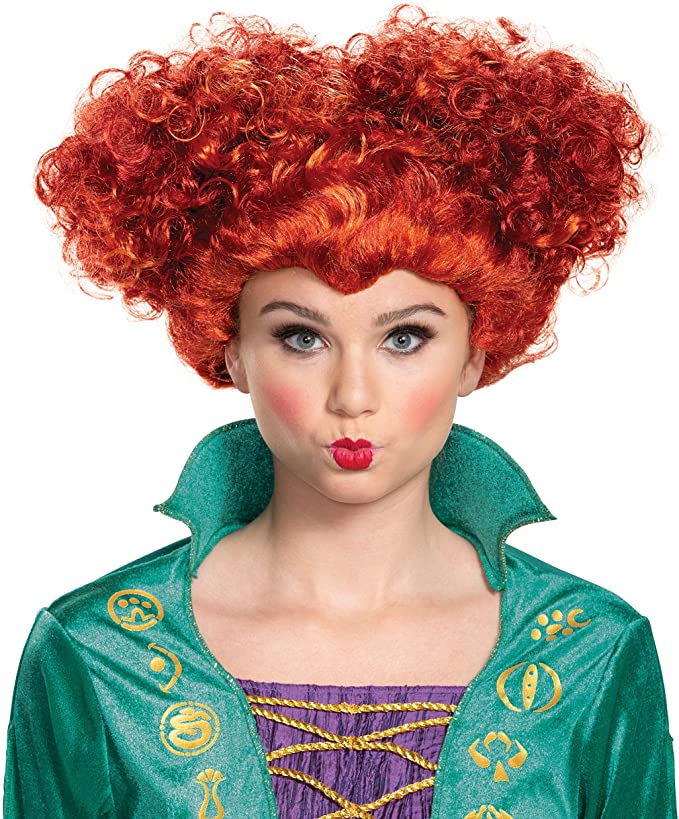 For a wig and beard combo that works for Hodor, Jesus, Hagrid, The Dude (with lots of trimming), and even Forrest Gump during the running years, there’s the Yilys Men Long Curly Golden Brown Hair and Beard Halloween Cosplay Wig. The multi-purpose, multi-costume wig can be used for several costumes and can be trimmed, dyed, and permed to perfectly match your desired look. 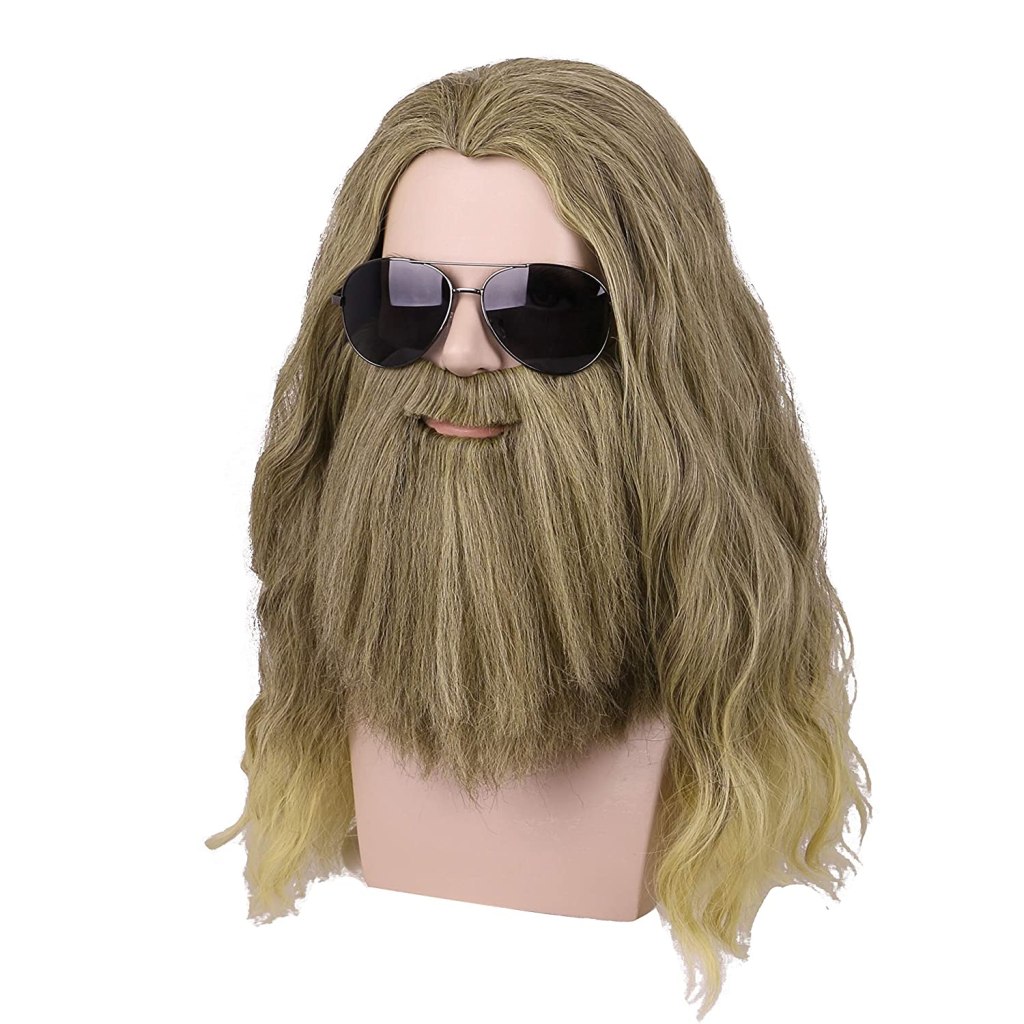 Comic lovers and moviegoers are still obsessed with Harley Quinn, and the just-released second Suicide Squad film is going to keep the fandom going. For a Halloween costume that will make you feel as cool as the DC hero, we like the Rubie’s Costume Co. Women’s Suicide Squad Harley Quinn Value Wig. Pair with a baseball bat, short shorts, and a fun-loving attitude that doesn’t take any sh…tuff. 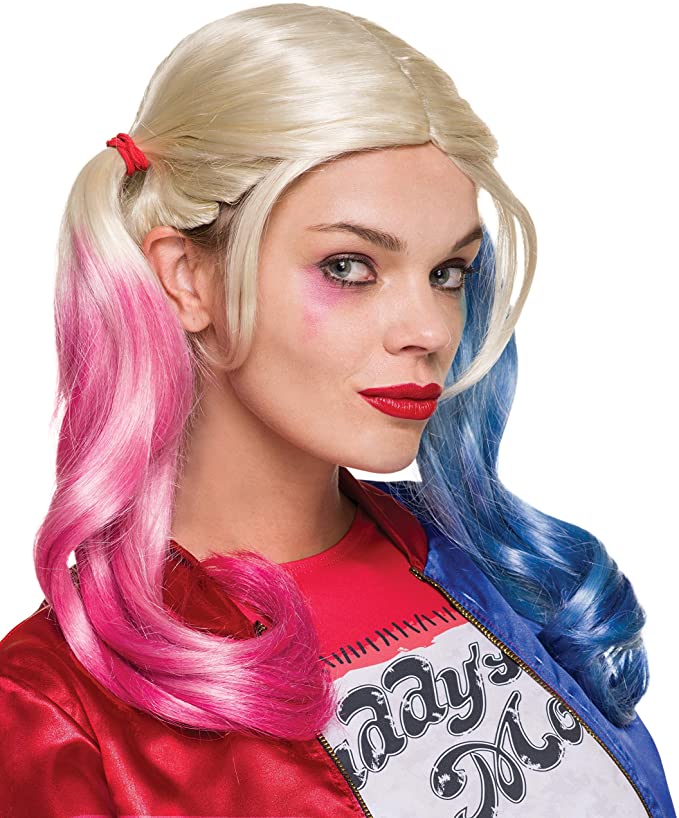 Be the joker to your partner’s Harley Quinn in this green Halloween wig. Made of synthetic fibers, this wig is easy to slip on and head out the door for a night of fun. Pair it with smeared makeup and a purple ‘fit and take on the party as one of DC Comic’s favorite villains. 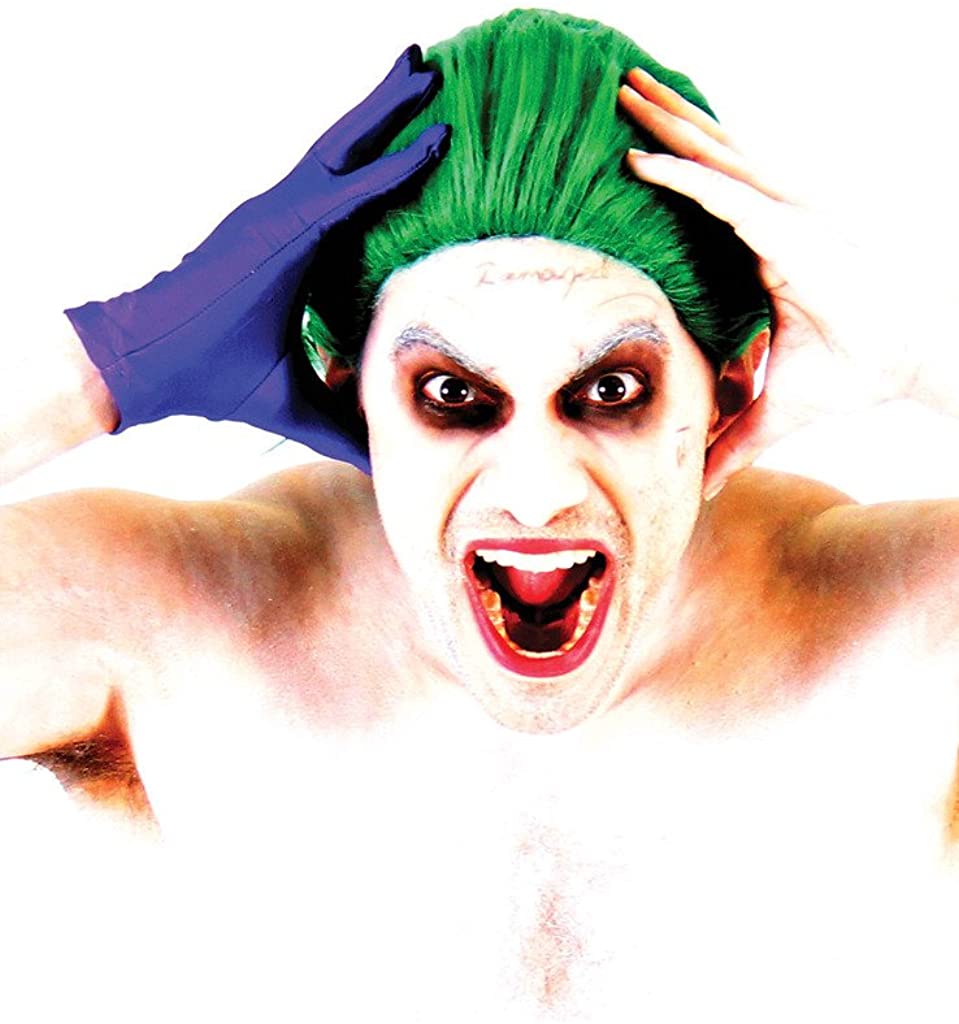 Go full-on warrior with this wing and beard set. The ponytail wig helps you morph into any of your favorite characters from Game of Thrones, 300 and more. It features a mesh cap while the beard has an elastic strap that secures it around your head. 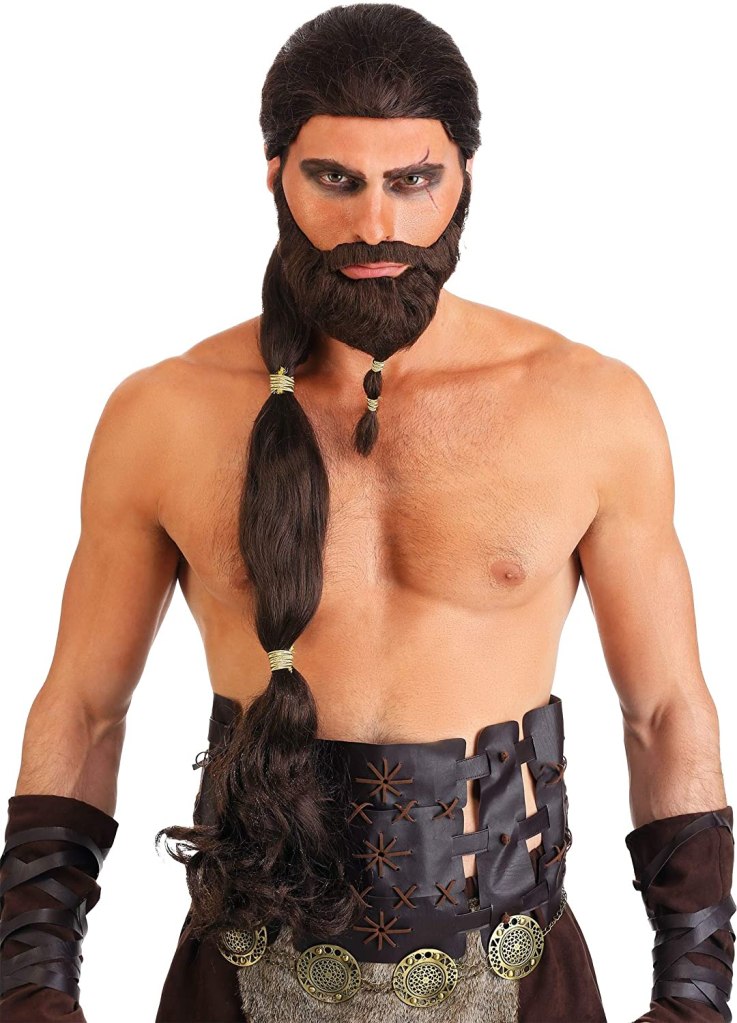