As office dress codes continually loosen and the line between a weekend and work wardrobe increasingly blurs, you may find yourself reaching for the same shirt for a Sunday game of pickup football that you’d wear to that Monday morning pitch meeting. The casualness of the modern office underscores the need for clothes that can do double-duty. A versatile shoe that suits casual and businesswear is a wingtip shoe.

Wing-tipped shoes for men are more ornamented than your average Oxford, which you might take to mean that they’re more dressed up. But those extra details nod to the wingtips’ hard-wearing outdoorsy origins, making for a semi-casual shoe that can be worn with slacks and selvedge jeans alike. While they’re too formal for shorts and too casual for a tux, almost everything in between is fair game.

Wingtips (also called brogues, but more on that in a second) are so named for the distinctive leather panel that is stitched onto the toebox which extends across the vamp and meets the outsole. This panel sort of looks like a bird extending its wings, or like the letter “W”. There are also longwings, in which the “wing” extends from the toebox all the way to the back of the heel, essentially bisecting the shoe into an upper and lower half.

Wingtips are often called brogues, but there is some distinction between the two terms. As mentioned, wingtips refer to the shape of the leather panel, while broguing refers to the unique perforations that run along the ends of the wingtip. There’s a lot of overlap, but the two are not always the same. For example, semi-brogue shoes have perforations but no wing shape, and there are wingtip shoes that don’t feature any perforations at all. A full brogue refers to a shoe that features both the perforations and the wingtip shape.

The broguing details may seem purely decorative, but they were actually designed for the rough terrain of the Scottish highlands. The holes were designed to act as drainage when trudging through wet conditions. While no one today would think to take their Allen Edmonds through a swamp, we’re left with is a stylish shoe with a rugged history that works for dressed up and dressed down settings. We’ve rounded up the best wing-tipped shoes for men, including dressy and casual options.

Before Cole Haan, there weren’t that many brands experimenting with what a dress shoe could be. The Grand Shortwing shows off the best of Cole Haan’s innovative sensibilities by marrying an athletic-inspired wedge sole to a traditional leather upper. This makes for a distinctly casual shoe that still feels at home at the office. The shoes feature a wingtip shape and brogue detailing, but does away with the toe medallion to make for a more streamlined shape.

Pros: Stylish and modern option for casual or office settings. Availalbe in a range of different colors. 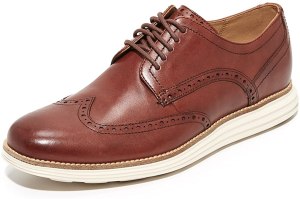 Allen Edmonds is probably the most storied and respected American dress shoe manufacturer, and the McAllister wingtip features a traditional full brogue design and a classic leather sole with a rubber heel. The 360-degree Goodyear-welted sole makes for a sturdy shoe that can be resoled once its worn down, making for an investment that will last for years to come. 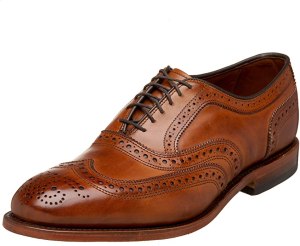 This shoe combines a white synthetic lug sole with a traditional leather dress shoe upper, making for a stylish and modern-looking shoe that’s also comfortable and stable when walking in slippery conditions. The sole is made with a shock-absorbing material that makes it more comfortable to stand in. The shoes feature a classic wingtip shape with a medallion design on the toe.

Cons: Not as much color variety as other options on this list.

If you’re looking for an affordable, dressy shoe that you can comfortably walk in, consider this wingtip shoe from Nunn Bush. It has a traditional look with a standard one-inch heel and leather upper. The outsole is synthetic and the insole has a shock-absorbing gel, making for a comfortable shoe that you can stand or walk-in. It comes in black, brown or cognac, which is a lighter brown color with a slightly burnished toe.

Pros: Non-slip synthetic sole and cushioned insole make for a more comfortable dress shoe. Can be worn casually or more dressed up.

Cons: Synthetic sole can wear down over time. 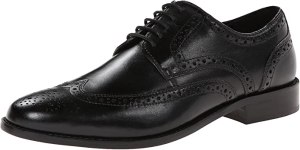 Suede shoes are more casual than leather shoes, and they tend to be more comfortable out of the box, too. These shoes have comfortable non-slip rubber soles and genuine suede uppers. They’re available in a variety of colors, like this casual gray option. They have a perforated brogue design with a medallion design on the toe, making for a shoe that combines casual and classic design elements.

Cons: Can have a synthetic smell out of the box. 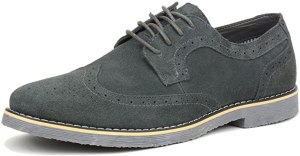