Now that Kanye has officially broken up with Gap, he’s finally doing exactly what Gap wanted in the first place — selling an affordable yet fashion-forward item to the masses. The rapper-turned-designer has teased oversized, futuristic visor-shaped sunglasses, titled YZY SHDZ, for months now, and these accessories could finally be coming to stores.

In an interview with Forbes, the controversial artist recently revealed details about the release and what consumers can anticipate, fiscally speaking.

As with a lot of Kanye fashion news, there’s a lot we don’t know, but keep reading to learn everything we do know.

At this point, it’s unclear if the futuristic sunglasses will be sold via the Yeezy Gap partnership or released independently. Gap is still planning to release Yeezy Gap products that were already in production before the official breakup; however, Kanye’s interview made it seem like he’ll be releasing SHDZ on his own.

Ye originally debuted the shades during his surprise performance at 2022 Rolling Loud Miami back in July. We also received a another preview when the Yeezy x Gap partnership premiered a campaign featuring a lineup of celebrities showing off the shades. Among the famous faces included none other than his wife Kim Kardashian and their daughter North West.

Ye has also been giving the glasses away to select celebs, and so they’ve made frequent appearances on social media. The exclusivity led us to believe these items would be priced like designer eyewear, not cheap sunglasses. If we had to guess a few weeks ago, we would have assumed they would sell for closer to $2,000 than $20. However, Ye seems committed to that price point, which is great news for Yeezy fashion fans. 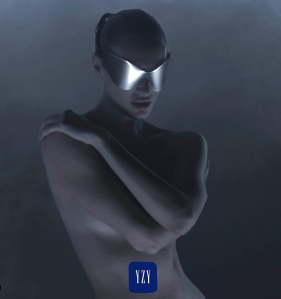 Earlier this month, we saw West take to social media to share a sneak peak video of a man demonstrating a pair of the roll-up sunglasses. The reflective lenses are able to fold and fit in your pocket without being damaged and are accompanied by a modifiable band to wrap around the back of the head. The man in the clip described the shades to have FDA approval — meaning the glasses would provide UV protection.

The glasses most closely resemble medical eyewear, and similar rollable shades are often used in doctor’s and dentists’ offices. However, this would be the first polarized roll-up sunglasses on the market, and there really isn’t anything quite like them. If we had to guess, we think we’re most likely to see SHDZ hit the market in early 2023, although that’s speculation at this point.

The news of his next fashion venture comes after Ye announced plans to terminate partnership deals with Adidas as well as Gap, although he still has an outstanding agreement with Adidas. Yeezy made claims that the retailers failed to meet responsibilities in their agreements with him such as distributing products to physical store locations and creating new YZY brick and mortar stores.

There has yet to be a confirmed release date for the Yeezy SHDZ, however, we advise everyone interested in the frames to sign up for the waitlist at yeezy.com and keep tabs on the Instagram account (@yzy).