When it comes to car accessories, two of the most important items to have on hand are a spare tire and a set of jumper cables. That said, what happens when you’re taking a trip on the open road and there’s not a car or care in sight? Or, if you’re storing a boat or car for a couple of months in cold weather, how can you ensure the battery won’t die? Jumper cables require another vehicle to start your engine, which means if you’re stranded with a dead battery, you’ve hit a dead end.

Fortunately, car battery chargers can quickly and efficiently power your battery. Some are more like jump starters that work immediately and some require some time to juice the battery to the point where you can start the vehicle. Some are portable and can be recharged when not in use, while others need to be plugged in to function.

But at the end of the day, the goal is charging the battery so the engine can start and all chargers do that well. Thankfully many car battery chargers do more than just charge batteries.

Depending on the model, they can put air in car tires and even charge your mobile devices in minutes. Unlike traditional jumper cables, they’re incredibly easy to use and can be used again and again if you keep them charged and take care of them.

And because most car battery chargers come with a whole host of built-in safety protocols, you don’t have to worry about stray sparks or adding the wrong voltage to the battery.

Given all the benefits for long-term battery maintenance or emergency charging, a car battery charger is a purchase you want to make before you need it. That’s why we rounded up some of the best car battery chargers. There are all-around solid car battery chargers for most cars, some budget-friendly options with fewer bells and whistles and a high-quality charger best for bigger engines.

For a different mix of useful features, the Stanley J5C09 JUMPiT Portable Power Station has a lot to offer.

First, it can deliver 1,000 amps of power to immediately jump-start most gas engines, whether car, motorcycle, boat or tractor. Thankfully there’s reverse polarity protection, a USB port and an LED light, just in case. But two features stand out here: The power station comes with a 120 psi air compressor to inflate tires and a 12V DC outlet for charging, so you can actually charge it through your car.

The downsides are you have to buy the AC charging cable separately and you can’t count on the battery to give you more than one use at a time or staying charged for more than 30 days.

But if you’d like to touch up your tires more and have a dead battery backup too, the Stanley car battery charger will work. 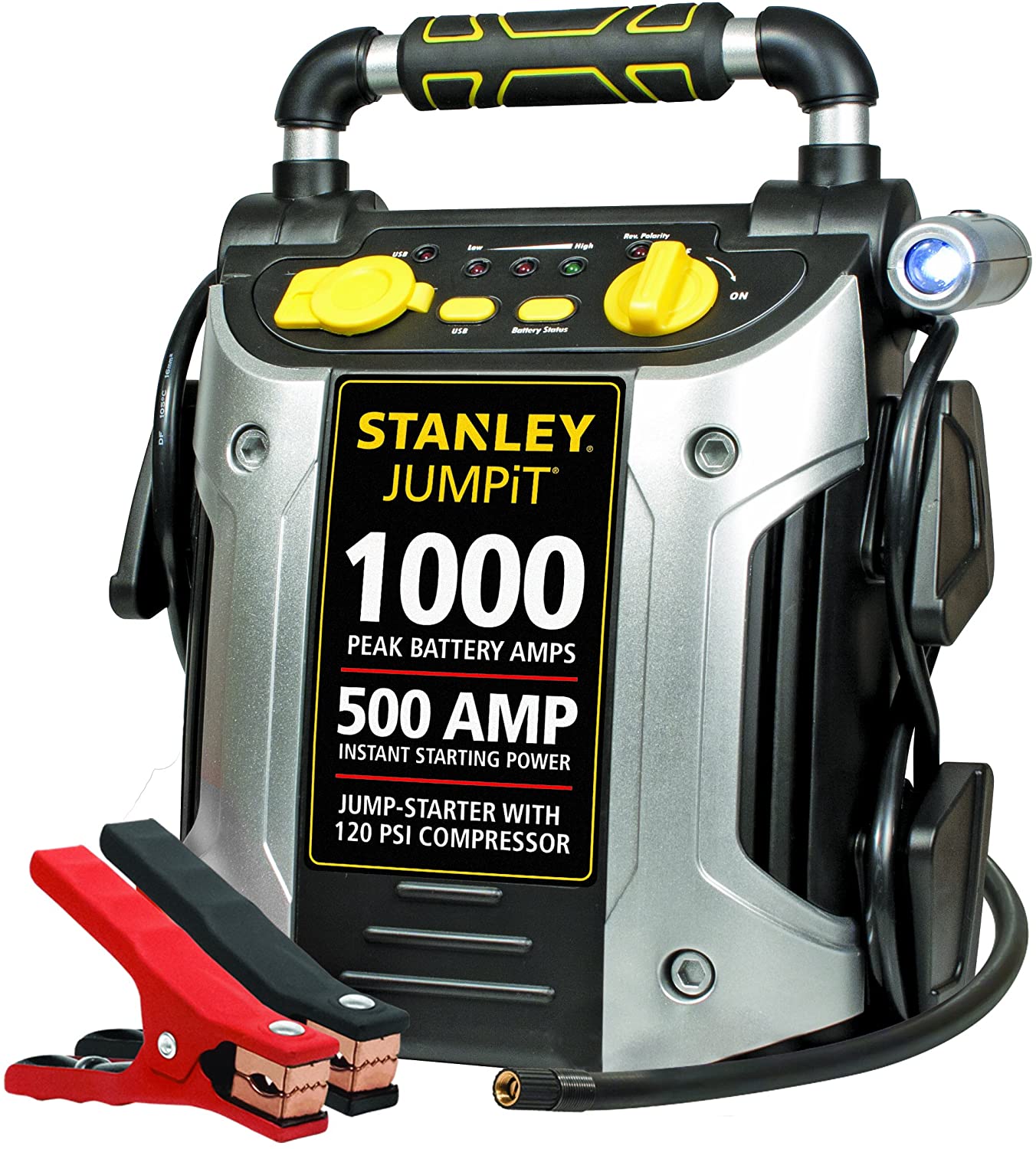 If you’re not in a rush to jump-start your car or just want to maintain the battery, the Schumacher SC1280 Smart Battery Charger can charge your battery overnight with 15 amps and trickle-charge it with 3 amps to make sure the battery doesn’t die.

It doesn’t have any extra features besides the built-in cables and reverse polarity protection, but it’s pretty cheap. All you have to do is attach the cables, plug the charger into a standard wall outlet, adjust the setting to the right kind of battery and press start. Whether it’s the next day or a month of storage, your car, boat or vehicle of choice will be ready to go. 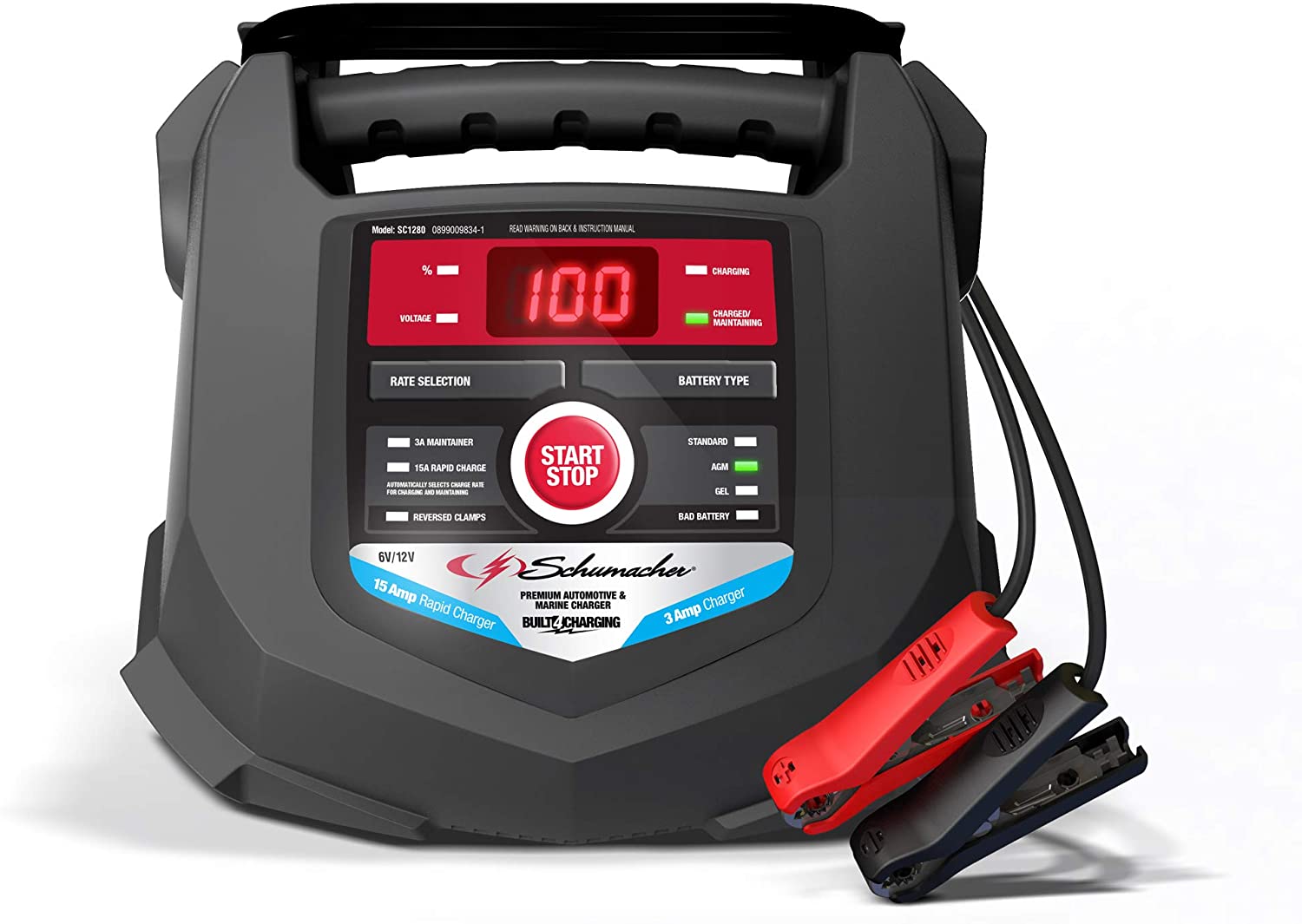 The Ampeak Smart Battery Charger is low-powered but smart about how it uses its juice. It takes the battery through a six-step process. Without getting into the weeds, each step contributes to the best possible charging result for refreshing a regularly used battery. For a charge overnight or faster, go for 15 amps. For long-term winter battery maintenance, which the Ampeak charger was designed for, go for 2 amps.

The major downside is this is one car battery charger that doesn’t bring back dead batteries. But as long as the battery has some juice, which most batteries do, it can charge it and get the battery to work again. 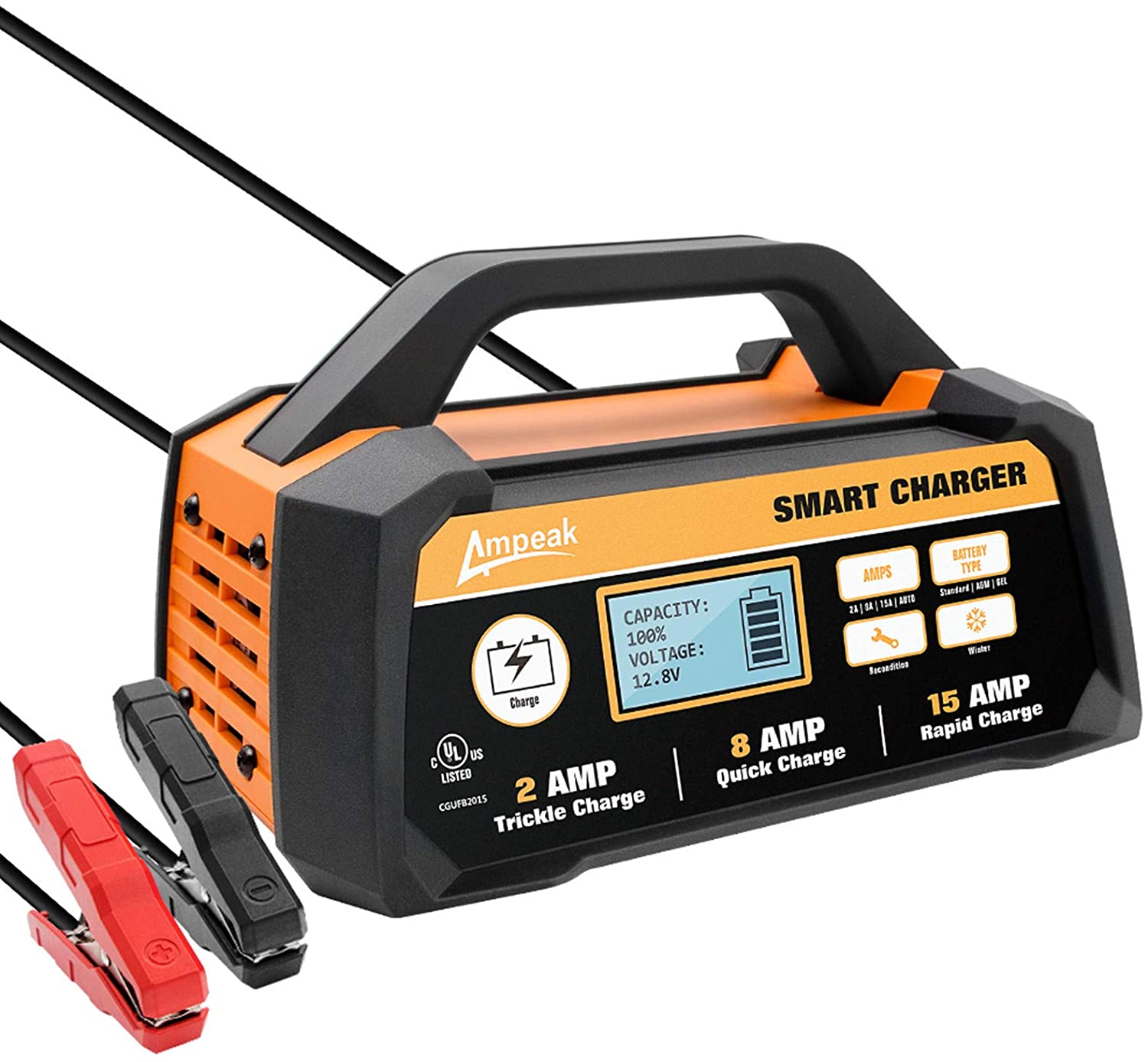 The Clore Automotive PL2320 Smart Charger can charge batteries quickly or keep a battery charged over the long term. Reviewers agreed this charger just worked to recharge dying batteries, no muss, no fuss.

This 20 amps charger also goes through the same advanced charging process as the Ampeak charger, so it’s suitable for charging batteries at all power levels. And of course, it has reverse polarity protection so you can’t accidentally damage anything.

Best of all, the Clore car battery charger doesn’t cost too much upfront. Better to pay less now for maintenance than pay more later to replace a battery. 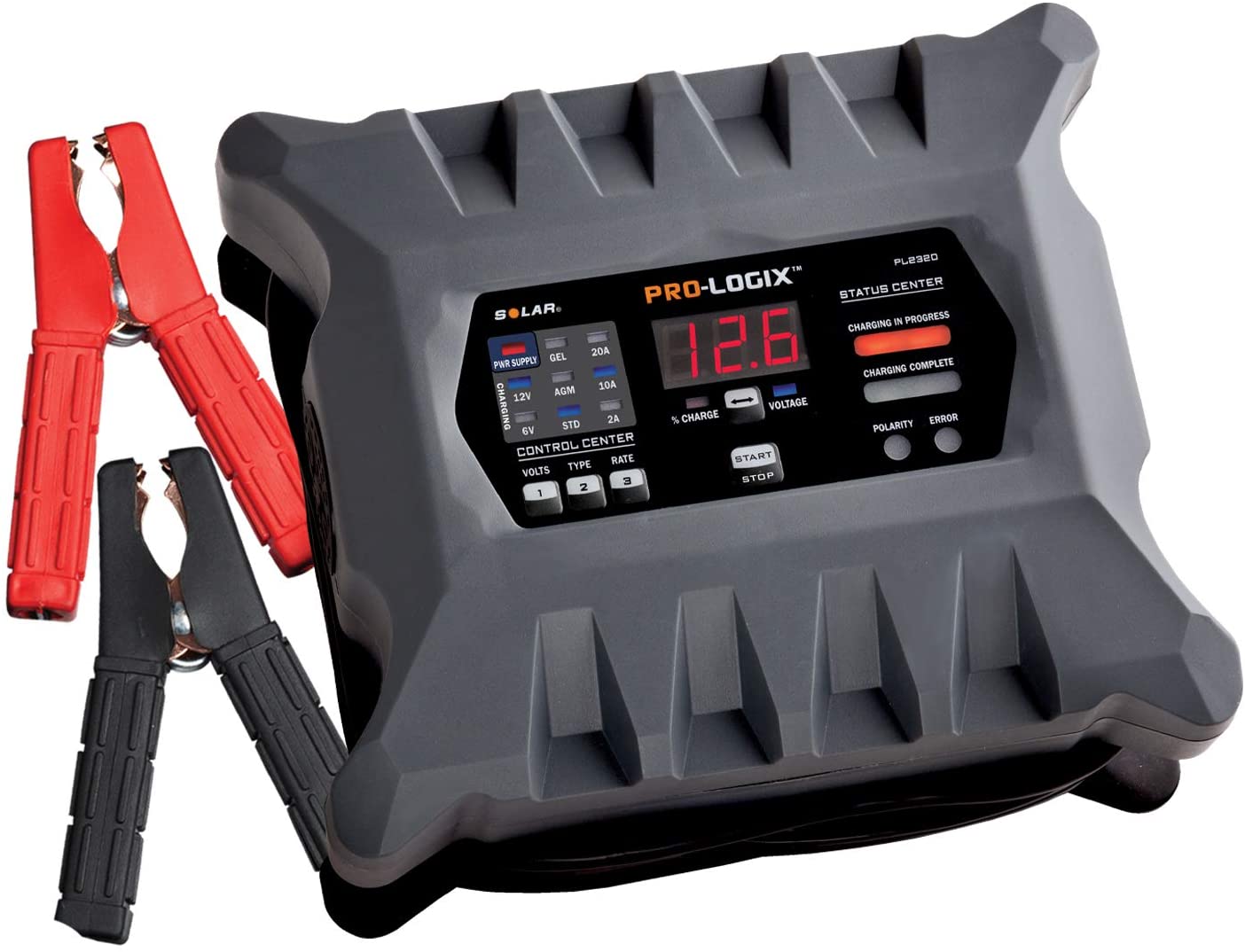 For a cheap maintenance and long-term car battery charger, the AmazonBasics Battery Charger is a pretty fair deal.

It’s a cheap, durable, safe, smart charger brick that you plug into your standard wall outlet, clip to your car’s battery and leave for a while. Though its 2 amps aren’t much, that’s enough to keep a battery alive in cold temperatures or give an older or temporarily dead battery enough juice to work with enough time.

For regular maintenance purposes, this is a solid car battery charger option for minimal investment. 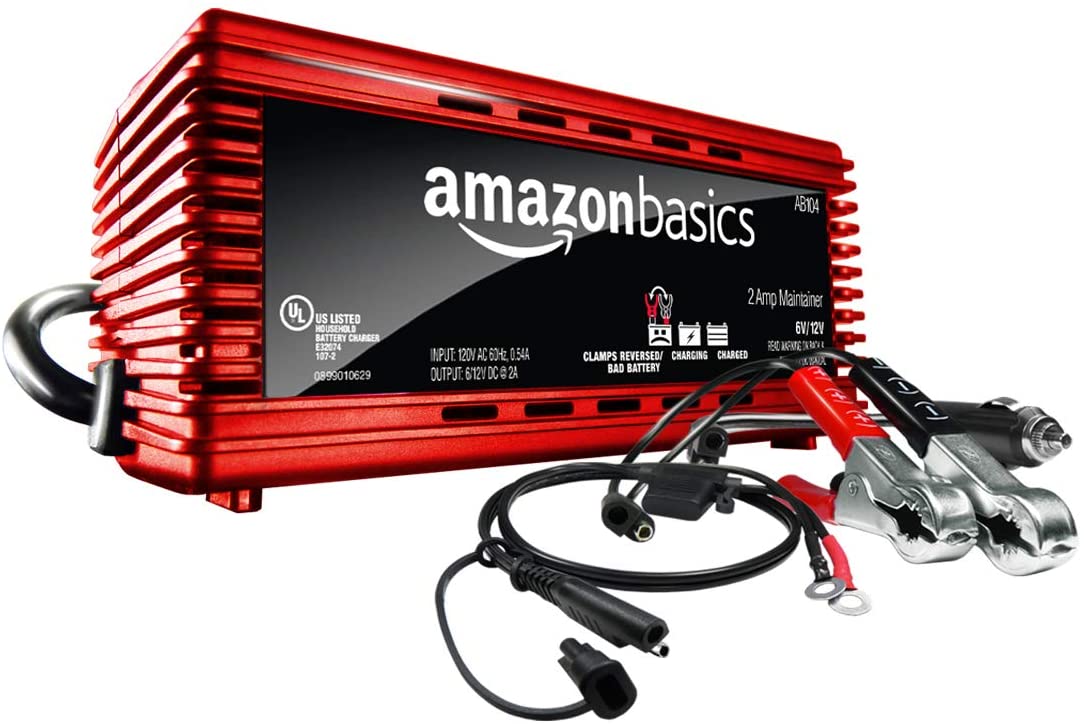 The HULKMAN Alpha85 Jump Starter can start vehicles with gas engines up to 8.5 liters and diesel engines up to 6 liters, ranging from motorcycle engines to heavy-duty trucks.

The large LCD screen simplifies monitoring the process and the starter comes with standard safety features as well as USB-A, USB-C and 12V DC ports.

You can get up to 60 starts on a single charge, less depending on the vehicle we bet, and the starter will stay charged for 1.5 years without energy loss.

The HULKMAN isn’t really a car battery charger so much as a jump starter, but for bigger cars and trucks, a starter can be a much more effective solution. 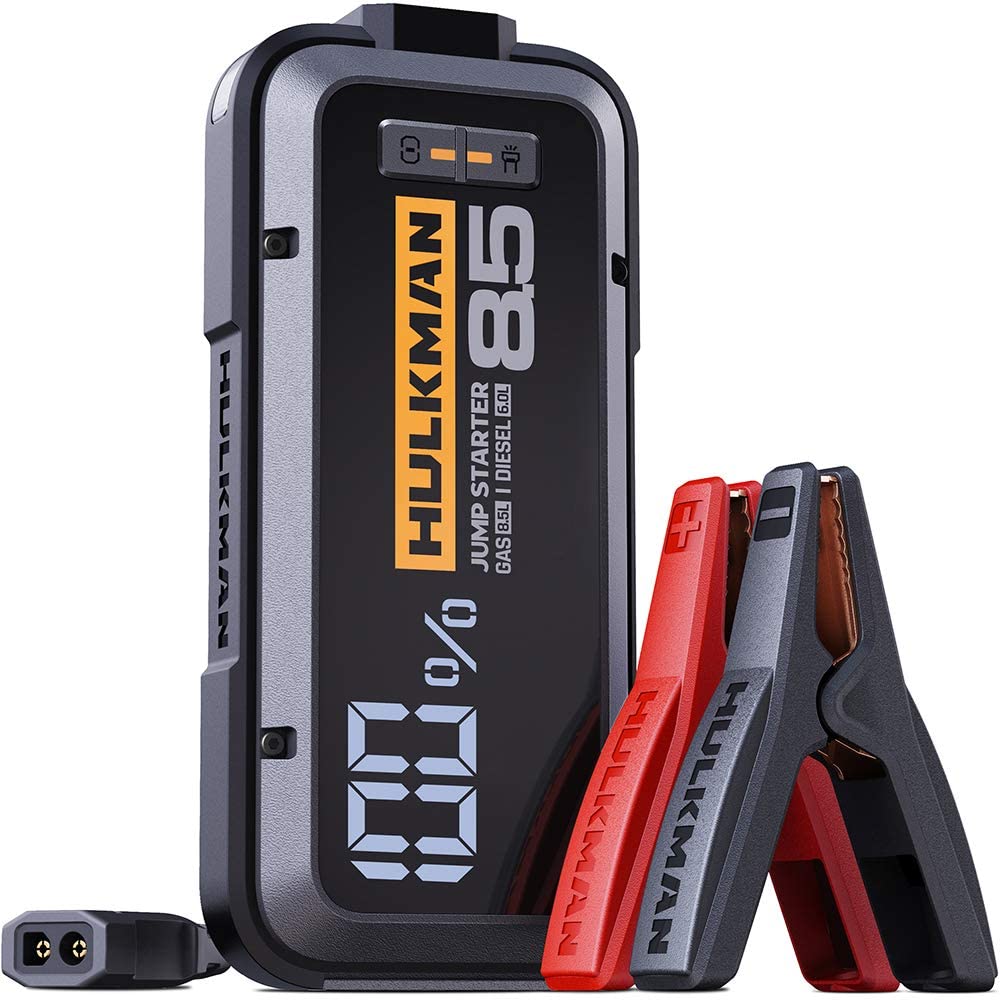 For a totally low-impact car battery charger solution, you can turn to the NOCO GENIUS1 Smart Charger. It plugs directly into the wall, can reach car batteries with its 6-foot cables and can charge the vast majority of standard batteries. If you need to maintain multiple batteries, this can be a great, simple solution.

But because it’s a small unit, it only offers 1 amp, so it will take some time to recharge the batteries. We would also note that depending on where your outlets are located, it could be difficult to get your car close enough. 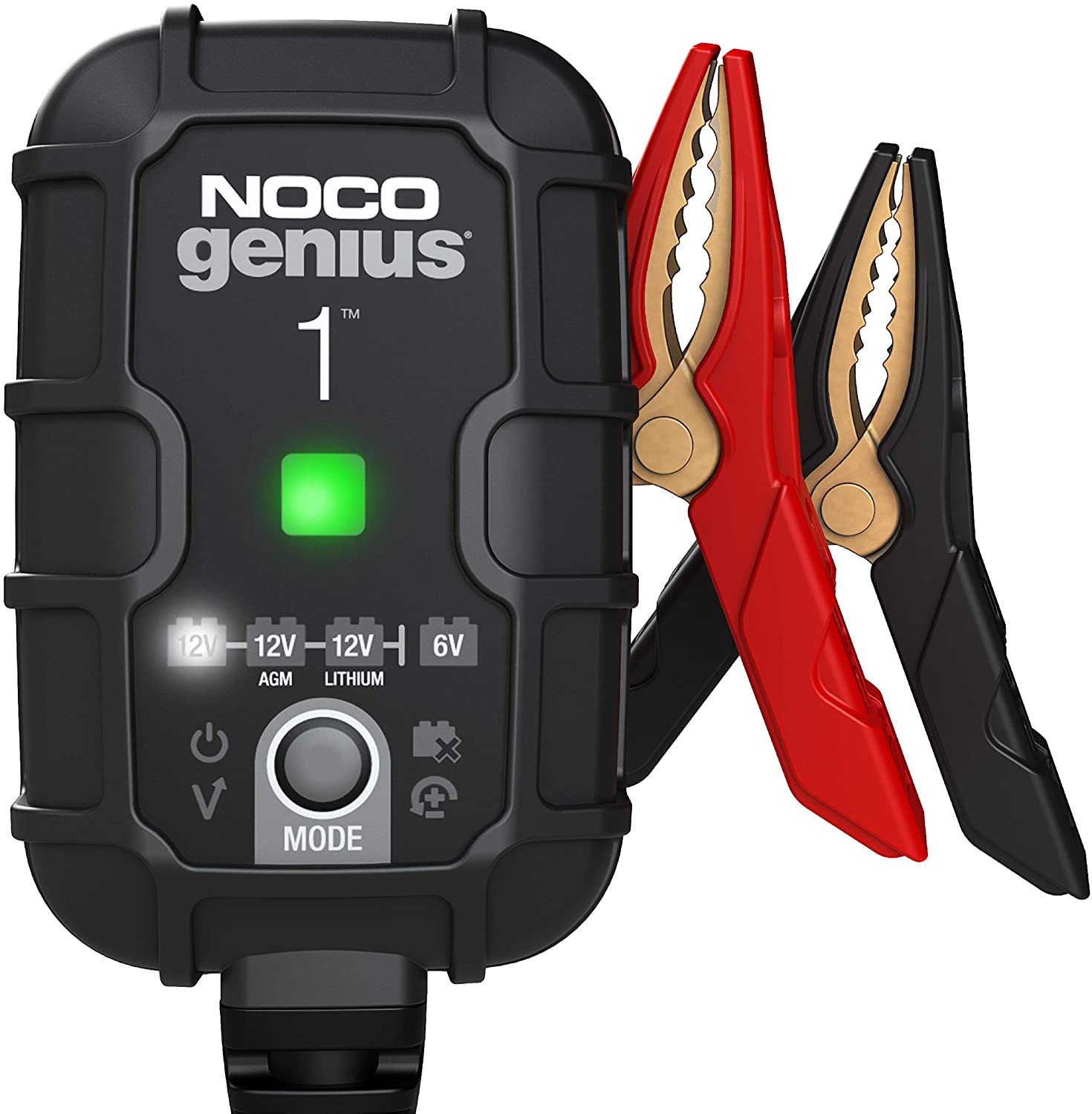 Buy Now on Amazon
Accidents Happen, Why Is Why We Keep a Dash Cam Handy to Capture the Unexpected