Having a flashlight that is small enough to be carried with you wherever you go, strong enough to light up the space around you, and durable enough to withstand bumps and bruises is an important part of personal safety. Flashlights are a must have for EDC or Every Day Carry, helping to keep you and your loved ones safe whether you’re walking through an empty parking garage, taking the dog out for its nightly stroll, or going on an early morning jog. A flashlight that is easy to use, easy to carry and light and compact enough to carry with you at all times are all important features to consider when searching for your EDC light.

We usually only think of using flashlights during situations that leave us without power. This can include family camping trips, with a large and cumbersome flashlight spending most of the year packed away with sleeping bags and tents. Most homes have a flashlight or two sitting under a counter in case of a power outage, with large flashlights a preferred alternative to candles, which don’t offer much light and can pose a fire hazard. Many car owners keep a large flashlight in their car in case of emergency, with a broken-down vehicle requiring a look under the hood or a light to help illuminate the side of the road while changing a flat tire.

But flashlights are personal safety devices that can be used every day, not just in extreme situations. Flashlights are great tools for lighting up sidewalks and paths during early morning or late-night physical activity, but they’re also helpful in situations when you may be attacked, with small and compact flashlights boasting enough wattage to temporarily blind an attacker if shone in their eyes. Tactical flashlights also give you something to strike your attacker with if they become physically aggressive.

To make EDC flashlights useful, they must be small, light and reliable. We’re shining a light on three flashlights that will help keep you safe.

Made with tactical features and strong enough to illuminate objects up to 600 feet away (the equivalent of two football fields), the J5 Tactical V1-PRO Flashlight is the most powerful flashlight on our list with a 300 lumen beam. Measuring 4 x 1 x 1.25 inches and weighing 3.4 ounces, it’s also the largest and heaviest flashlight on our list. Pros of the flashlight include its High, Low and Strobe setting options and a wide to narrow beam that make it easy to light up a wide space or zero in on a particular point. The flashlight is water resistant and shock resistant, guaranteed to survive up to a nine-foot fall. Like the Streamlight Microstream, the J5 Tactical V1-PRO Flashlight only requires one AA battery. The flashlight’s biggest con is its hefty size and weight, with some customers also noting that the flashlights loud clicking noise when turning it on is not great for outdoorsman or security personnel. It also has the shortest run time, with the flashlight only lasting one solid hour of use. 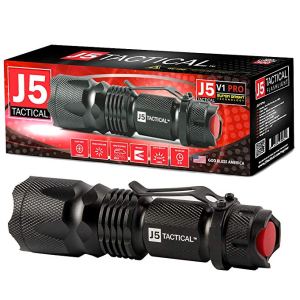 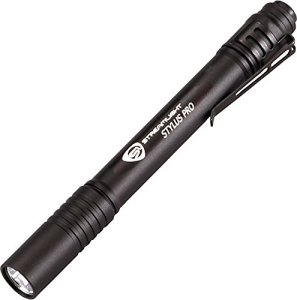 Made tough from anodized aircraft aluminum that is abrasion and corrosion resistant, the Streamlight MicroStream Flashlight is virtually unbreakable and features a scratch-resistant polycarbonate lens. Pros of the flashlight are its size and weight, with the MicroStream measuring 0.6 x 0.6 x 3.5 inches and weighing 1.2 ounces, making it the most compact option on our list. The MicroStream has a smallest beam with 28 lumens and a run time of 2 hours and 15 minutes, which is still longer than the J5 Tactical. This flashlight is a great option if you want something that is truly compact and doesn’t need to reach far distances ore boast a huge wattage. 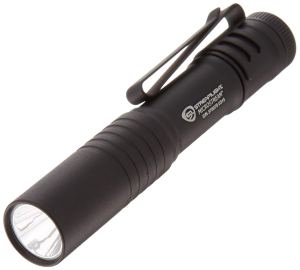