We’ve found a product that finally lets you nap virtually anywhere. It’s called the Ostrich Pillow , and yes it looks a little wacky, but you won’t be worried about that when you’re fast asleep.

Napping isn’t just for the lazy anymore. Recent studies have proven that taking a couple hard-earned naps throughout the day is actually the most natural sleep pattern for humans. This might seem shocking to some of us here in America, but other countries such as Spain, Italy, and Mexico are centuries ahead of us when it comes to getting some shut-eye in the afternoon.

Napping has been utilized by hyper-productive, successful people for a long time, including some surprising celebs. Kanye West famously takes naps next to baby North, while Thomas Edison reportedly had cots placed around his workspace for napping (if only he invented an Ostrich Pillow!). Naps are also great for workout energy too.  Muhammad Ali didn’t start his afternoon fitness routine until he got a quick nap.

But there’s one problem that often stops people from taking advantage of naps: there’s very few comfy napping spots outside of your home. Here’s where the Ostrich Pillow comes in.

This “napping pillow” allows you to get some shut-eye in almost any position, whether you’re trying to rest in cramped airplane seats or dozing off during a long car ride. The hood design also creates your own dark and cozy “micro environment” that promotes a private, restful slumber.

The Ostrich Pillow has seen huge success since it’s crowd-funded creation in 2012, with appearances on CNN talk shows, and coverage on well-known media outlets like Wired and Mashable. 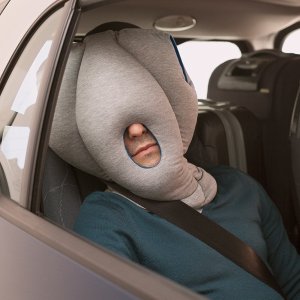 But even with all the hype surrounding the Ostrich Pillow, we weren’t totally convinced. I myself am an avid napper, but I often find myself out and about with nowhere to catch some Z’s when exhaustion strikes. So I gave the Ostrich Pillow a spin to find out.

The first napping session I took with the pillow, was during my 3 hour math class. The class takes a 15-20 minute break halfway through, so I was hoping I could squeeze in a power nap during that time, and be alert for the second half of class. 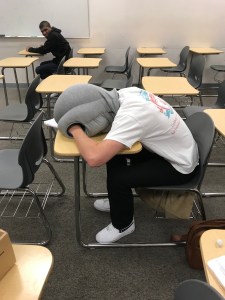 So while my classmates scrolled through their Instagram feeds or scrambled to make it to the vending machine, I strapped on my Ostrich Pillow and got settled for a nap right at my desk (pictured below). Although it wasn’t my bed (or a couch for that matter), I still got a decent 10-minute nap. Even though I had to explain to all my classmates that I was using the pillow to test out for my job, the sharp alertness I felt for the next couple hours was well worth it.

I’ll certainly be keeping my trusty Ostrich Pillow in my car and my in my luggage from now on.

This Blanket Promises to Reduce Anxiety and Help You Sleep Better