This story was originally published on Sunday, March 20, and updated Tuesday, March 22 with new information. Additional writing and reporting for this story were performed by SPY’s Managing Editor Barret Wertz.

On Tuesday, March 22, Jeremy Boreing, co-founder, co-CEO and self-described “god-king” of the conservative website The Daily Wire, announced the launch of Jeremy’s Razors, part of a campaign against Harry’s razors. Harry’s is a popular men’s grooming company that pulled advertising from The Daily Wire one year ago after receiving a complaint on Twitter that some of The Daily Wire’s podcast hosts had engaged in homophobic speech.

Jeremy’s Razors is the culmination of an “I Hate Harry’s” campaign announced last week by Boreing and Ben Shapiro, a conservative media figure and editor emeritus at The Daily Wire.

A commercial for Jeremy’s Razors features models, bald eagles, flamethrowers and other exaggerated displays of traditional masculinity, and the new Jeremy’s Razors website says that the razor is “for the strong willed, not the weakhanded.” Of course, there are already plenty of men’s grooming companies that appeal to traditionally masculine attributes. Old Spice and similar brands have been using chainsaws, explosions and grizzly bears in bombastic, hyper-masculine advertisements for many years.

“Our country is in trouble,” Boreing said in the commercial, draped in a fur-trimmed cape, wearing a crown and sitting on a throne. “Conservatives are being canceled by Hollywood, the media, universities, and now Harry’s razors.” He finished by asking The Daily Wire’s audience to “stop giving money to woke corporations who don’t think you deserve their product” and give it to Boreing instead.

As part of the new campaign, The Daily Wire also said that they had posted “I Hate Harry’s” ads across the street from the Harry’s headquarters. Earlier SPY.com described the campaign as a boycott, but in an interview with SPY.com, Boreing said that he is not calling for a boycott of Harry’s. In response to our coverage of the “I Hate Harry’s” site and Jeremy’s Razors launch, Boreing replied to SPY via Twitter, “I’m not exactly calling for a boycott of Harry’s. Boycotts are feckless. I’m calling for people to buy my razor instead.”

It must be a breathe of fresh air to walk out of the @harrys HQ to see that beautiful salt and pepper beard. https://t.co/0CxiesjCDO pic.twitter.com/tJ8QB0PSXH

What The Brands Have To Say

In a statement from Jeff Raider, Co-Founder and Co-CEO of Harry’s, he states: “We created Harry’s to offer better shaving and grooming products for everyone. We believe deeply in free speech but draw the line at hate. We’ll continue to support our customers and community with kindness and compassion.”

A spokesperson from the brand continued by saying that Harry’s does advertise across various media, including the conservative FOX News; however, the brand does not associate with entities that engage in or endorse “hate speech.”

Harry’s spokesperson further explained that their customers span genders, sexual orientations and ethnicities, highlighting that a main initiative for the brand is bringing equitable access to healthcare to men across the world. The brand has donated over 8 million dollars to date to its non-profit partners and provided mental health assistance to over 900,000 men, including students, veterans, Black men and men of color, and those within the LGBTQ+ communities. (Read more about Harry’s Social Mission here.)

In an interview with SPY, Boreing said that this story actually started a few years ago after Shapiro appeared at the anti-abortion March for Life event, which led to an exodus of advertisers. Boreing said that the incident with Harry’s was a breaking point for him, and he felt that the brand had unnecessarily attacked his media company.

“Ben Shapiro did the March for Life in D.C. and that day about a million and a half dollars worth of advertisers walked out the door,” Boreing said in a phone call with SPY. “It’s one thing for advertisers to pull their money off our shows, that’s absolutely their right, that’s their business. They can do it for any reason they want, they can do it because the ads aren’t working, they can do it because of something we say that they object to, they can do it because they don’t like the cut of our jib, that’s their business, that’s business. But this publicly virtue signaling on their way out the door is such a betrayal. You know, we’re partners with these advertisers. We put our personal credibility on the line to advocate for these products in front of our audience, an audience that they are paying to reach, and then at the first sign of trouble, they denounce us publicly. And that becomes an attack on our business.”

Jeremy’s Razors consists of a weighted razor, shave cream and post-shave balm, and is available for pre-order now. The Daily Wire says the first units are expected to ship around Father’s Day. 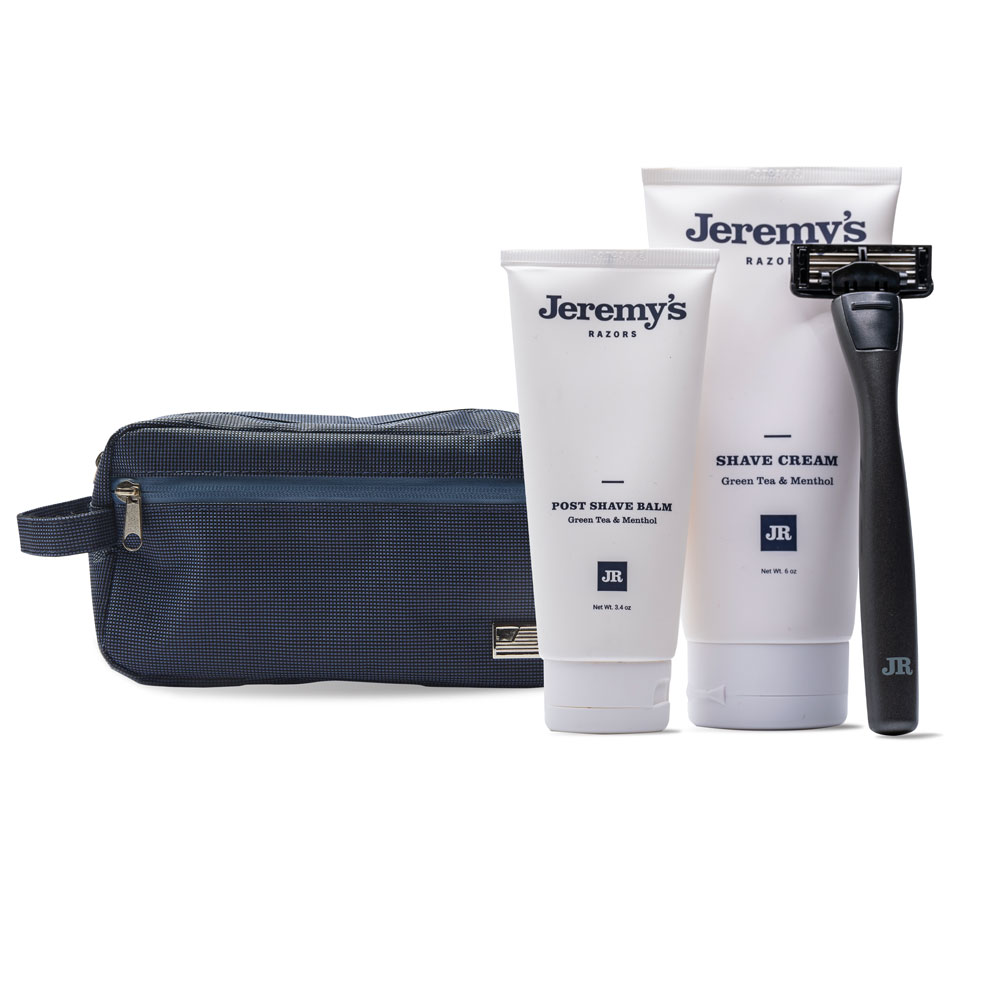 Our original story on the I Hate Harry’s campaign, published on Sunday, March 20, can be read below.

Last week, Ben Shapiro and The Daily Wire announced a mysterious new campaign targeting Harry’s razors. On Tuesday, March 16, Shapiro tweeted a picture of himself with a razor nick on his throat along with the caption, “HARRY’S drew first blood. Now it’s our turn.” The tweet also contains a link directing readers to a new website, ihateharrys.com, which teases an upcoming announcement related to the razor company.

As of Friday, March 18, a matching tweet from Jeremy Boreing, co-founder and co-CEO of The Daily Wire, was pinned to the top of the publication’s Twitter profile.

Shapiro is an editor emeritus at The Daily Wire, a conservative publication that covers news and culture war issues. Shapiro has earned a reputation as a conservative snowflake who’s easily triggered by the existence of trans women, men in dresses and Cardi B. Shapiro also has a massive audience, and he’s an influential figure in conservative media.

The ihateharrys website simply reads, “I hate Harry’s – Find out why on 3/22/22” along with a countdown.

If we didn’t know better, we might think this was some type of marketing campaign between Harry’s and The Daily Wire, but that seems extremely unlikely. A spokesperson for Harry’s told SPY that the company is not affiliated or associated with Shapiro in any way. We also reached out to Shapiro to ask about the announcement, and we’ll update this post if we hear back.

So what is The Daily Wire planning? If we had to guess, this is the start of some kind of pressure campaign or boycott. Some followers of The Daily Wire have also speculated that the publication is announcing some kind of razor product of their own.

Last year, Harry’s announced that it would no longer advertise on one of The Daily Wire’s podcasts after receiving a complaint on Twitter about a video featuring the podcast’s host. The Daily Wire regularly misgenders transgender people, and the company has been accused of peddling homophobia.

Back on March 19, 2021, the Harry’s Twitter account responded to a complaint by tweeting, “Thanks for bringing this up. We condemn the views in this video, which are inexcusable & at odds with our longtime support of the LGBTQ+ community. We’ve ended our relationship with this show & are looking into our sponsorships to prevent any values misalignment going forward.”

Boreing responded at the time, “Harry’s makes great razors. That’s why we’ve been proud to advertise them for years. We know @harrys doesn’t share our values. Who cares? Economic decisions shouldn’t be political decisions. But now Harry’s has decided to declare that conservatives don’t deserve great razors.”

Harry’s makes great razors. That’s why we’ve been proud to advertise them for years.

Look, I’m an old-school free speech liberal, and in 2022, that makes me very, very extremely uncool. In extreme cases, it can even be a professional hazard, as supporting a culture of free speech necessarily demands supporting the free speech of total asshats. As a point of reference, I think Joe Rogan should be able to talk to whoever the hell he wants on his podcast, and I think the way many of my peers have embraced corporate censorship is misguided.

The SPY team recently named Harry’s Truman razor the best men’s razor in the world, and it was a repeat winner in The 2021 Man, our end-of-year product awards. (While the SPY team is unanimous in its love for Harry’s razors, we’re split on whether you really need more than two or three blades in a razor.)

Harry’s has expanded in recent years, and the company now makes its own body products and skincare line. And while the company started as an online shave club, you can find their products on store shelves IRL, too.

If you are looking for an alternative to Harry’s razors, we recently reviewed Dollar Shave Club’s classic razor, and it’s also an excellent shaving system. In our DSC review, we noted that the original $1 razor should cost a lot more than it does, especially in this time of runaway inflation, and it’s a great product for any guy.

As we said, we’ll update this post if we hear back from Harry’s, Shapiro or The Daily Wire. Check back on March 22 to see what becomes of the I Hate Harry’s campaign.