Somewhere between a great detangling brush or beard comb and a traditional straightening iron, you’ll find the best beard straighteners.

Yup, you might not have heard of them before, but there are hot straighteners out there to help you tame and straighten out wild beard hairs. They work in the same way as traditional straightening irons, except they’re designed for flattening and straightening out beards instead.

The basic idea is this: Heat breaks down the positive hydrogen bonds found in your hair. Once that happens hair can’t maintain its curly shape and will straighten out as you brush through it.

But don’t worry, this effect isn’t permanent. Because the bonds are hydrogen, it only takes water for your hair to regain its original form.

How to use the best beard straighteners

Before we get to beard straighteners themselves, keep the following tips in mind:

Now that you know what a beard straightener can do and how it works, check out some of the best beard straighteners you can buy online below. They won’t ever run out, making them a great long-term grooming buy, and we bet you’ll be heating up your straightener on the reg and taking it straight to your beard with aplomb before you know it.

For the overall best beard straightener, the Cayzor Beard Straightener has our vote.

It has five temperature settings ranging from 210 to 360 degrees, which is not too many or too few, but just right for most men. An LCD display shows the temperature rising in real-time, so you’ll know exactly when the straightener is ready.

The heating element uses PTC heaters that heat up to temperature in about 60 seconds. PTC heaters, or positive temperature coefficient heaters, have self-regulation heating properties that make it more difficult to continue heating as the temperature goes up. That means it’s basically not possible for them to get hot past a designated temperature, making them very safe.

The only downside for some is the cord doesn’t have 360-degree rotation as you maneuver around, but we think that con is ultimately a pro because it will ensure the cord will remain stable and last longer. The straightener is still pretty compact and maneuverable too and you won’t be using it for too long, so we don’t think it’s a big issue. 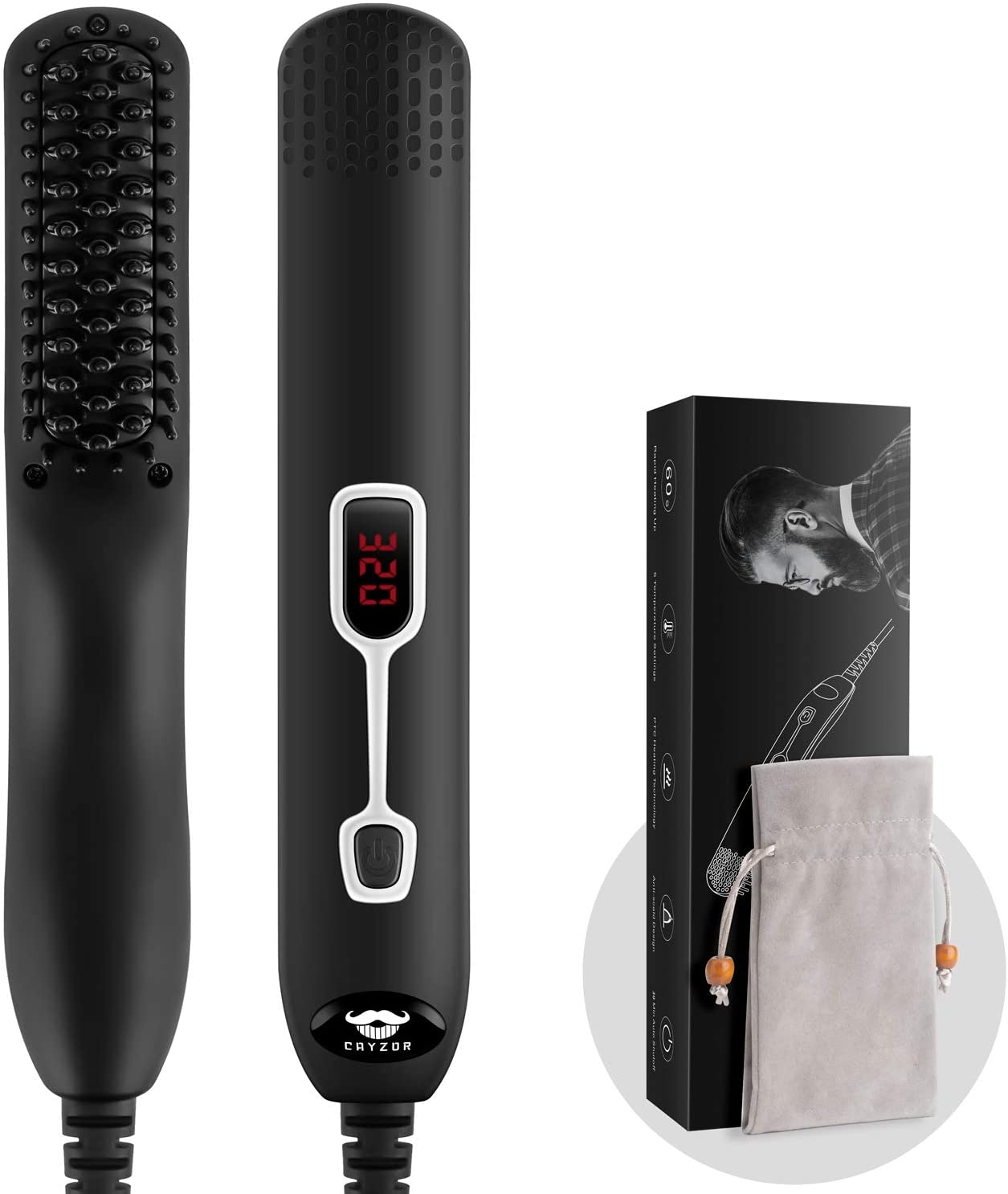 This option can warm up to a blazing 428 degrees Fahrenheit, making it a quite powerful and hot beard straightener. The bristles on the brush feature extra-long, high-quality glass fibers for extra durability. Also featured with the straightener are a beard balm and beard oil that are sure to keep your beard healthy and nourished after all the straightening you’re doing. 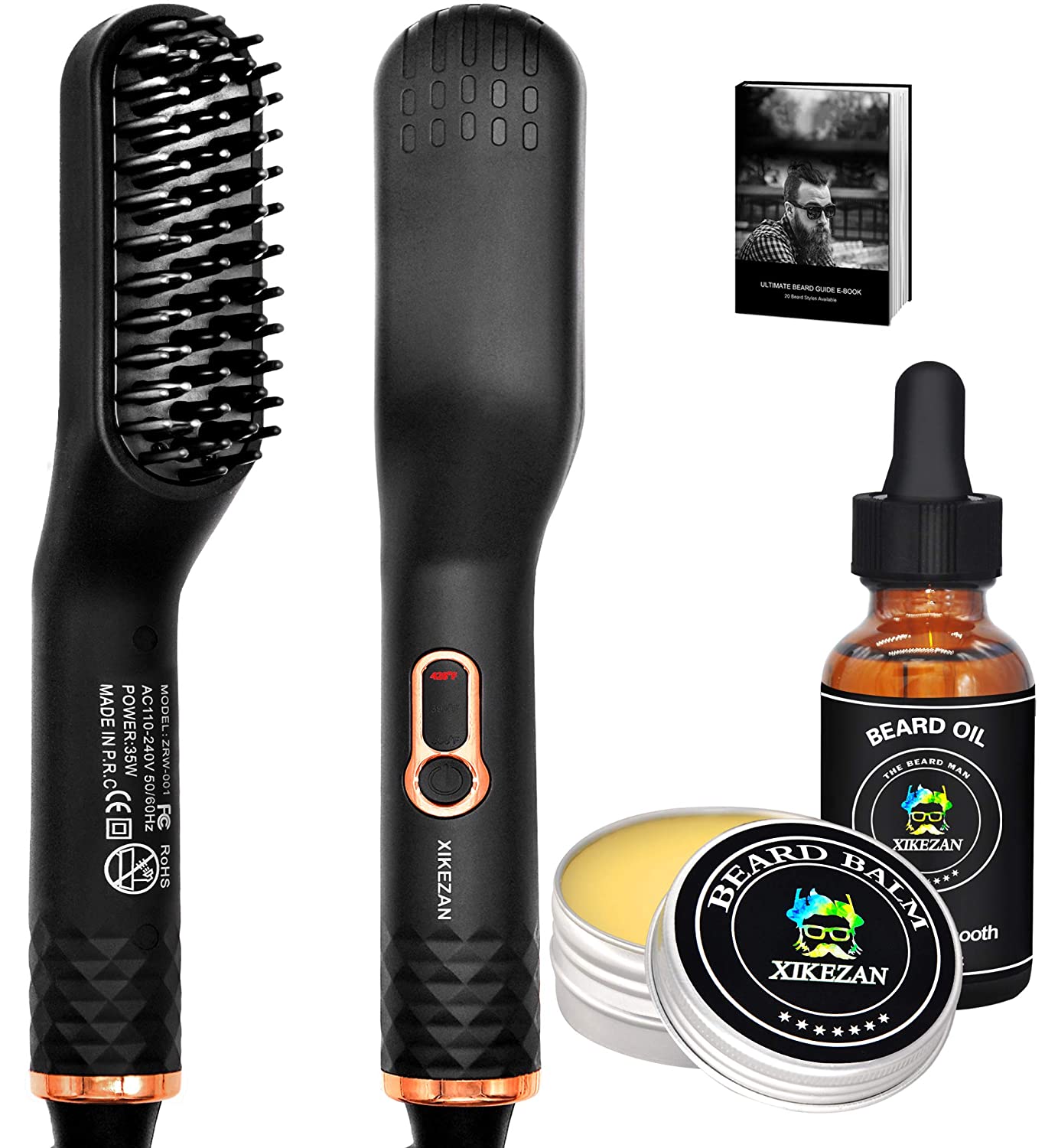 If you’re looking for a wide beard straightener that’s easy to transport, then Aberlite has you covered. It features advanced ionic conditioning that helps to keep your beard looking great while keeping the skin safe underneath. The Aberlite MAX Beard Straightener has an electronic display that shows the temperature on the front of the device when in use. The higher the temperature, the better it is for coarse and long hair. 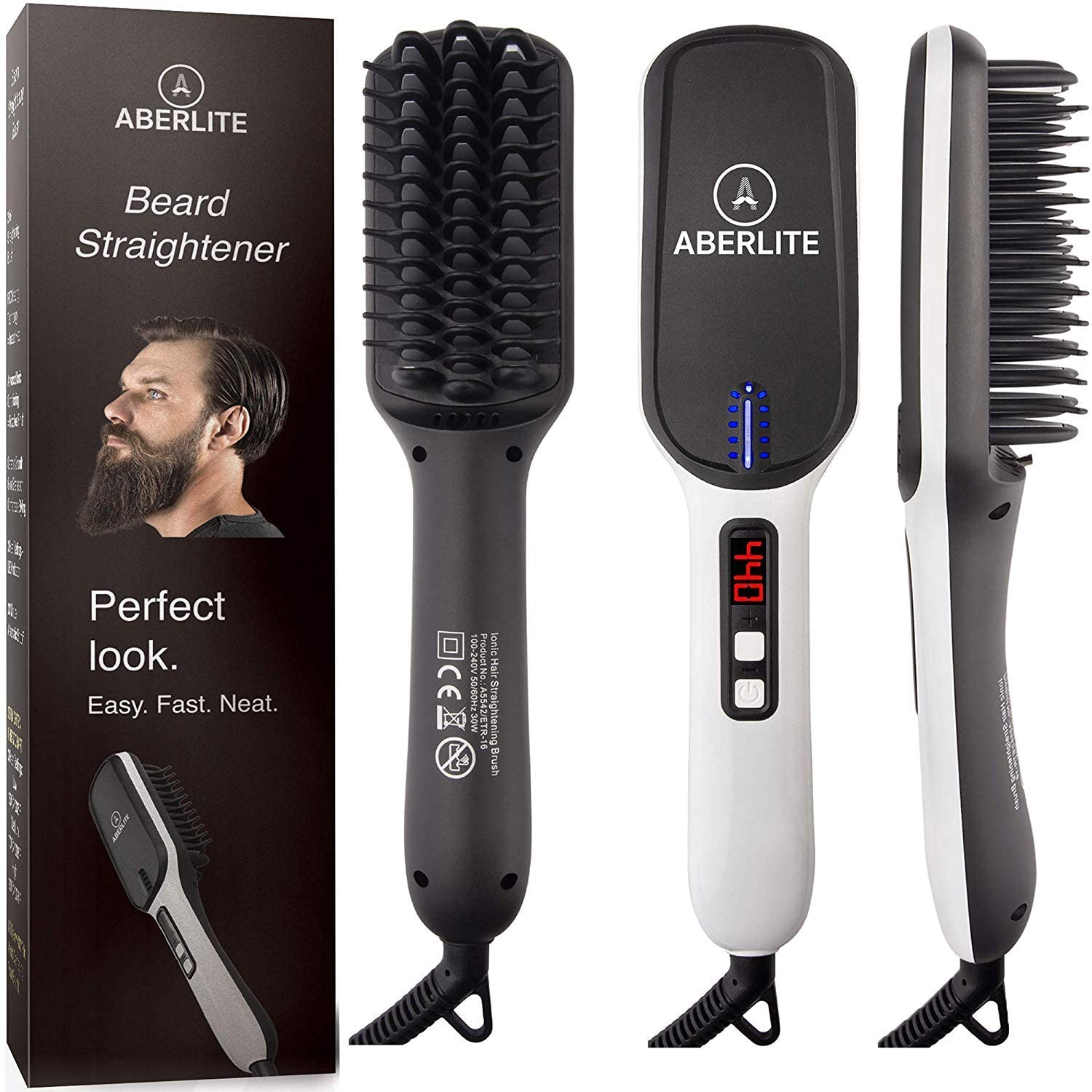 BEST FOR HAIR AND BEARD

Because beard straighteners are fairly niche, there aren’t a lot of well-known or trustworthy brands in the space. Well, except for Masc by Jeff Chastain. Chastain is a longtime stylist who developed the Kuschelbär Original Hair and Beard Straightener, so you can trust it actually does what it says. And what it does is use negative-ion technology to heat, soften and style beard hair and scalp hair.

Just turn it on, let it heat up for three minutes and brush away until your hairs are under control. The bristles won’t harm your skin and even multiple passes won’t damage your hair.

One last important heads-up: We’ve included an option to buy on Amazon, but reviewers have recently reported getting beard straighteners with a European plug. For that reason, we’d recommend buying the straightener directly from the US website. 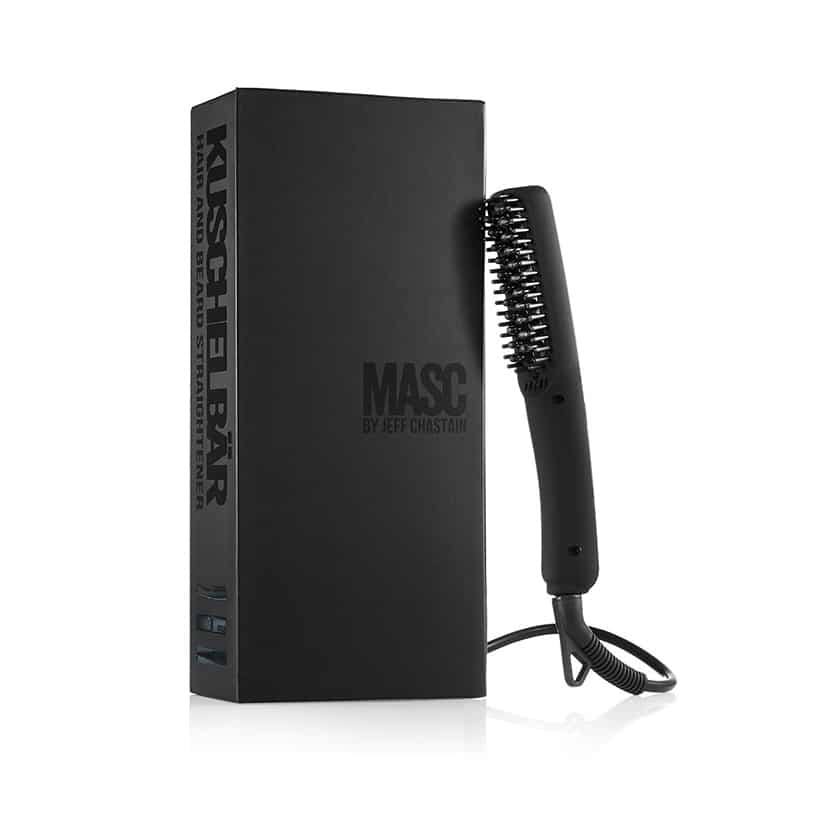 Courtesy of Masc by Jeff Chastain

This straightener comes with a sleek, functional design that’s sure to be efficient and durable for consecutive usage. It features durable ceramic plates and ion-generating bristles that help to straightener hair gently and safely. Also, it features anti-scald technology to help ensure your safety while using. 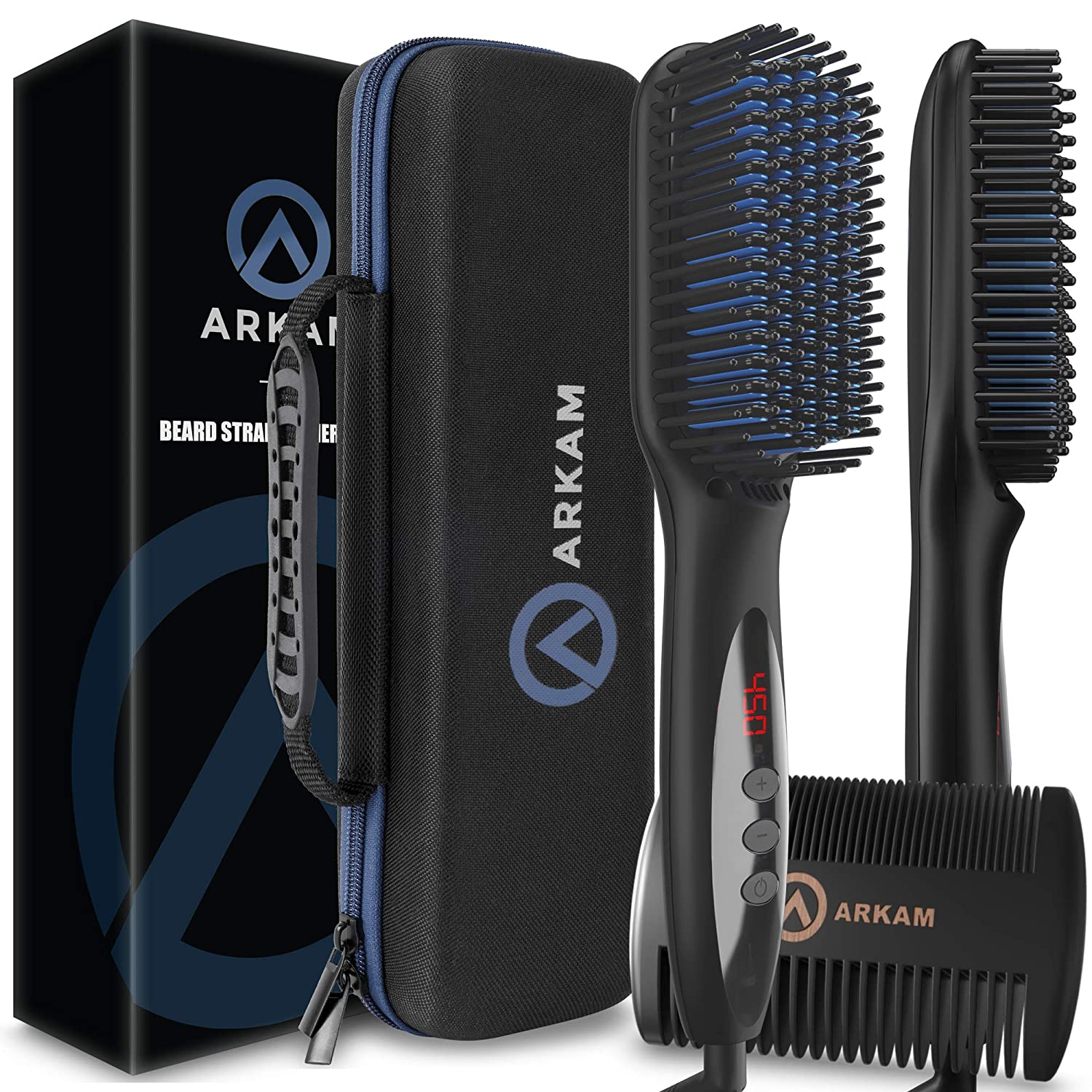 For a more compact beard straightener, go for the Safenorth Beard Straightener Brush. With this brush’s small size, oval-shaped head, 360-degree rotatable cord and short heat-up time, you’ll be able to quickly and easily brush your whole beard. With temps ranging from 260 to 400 degrees F, it’ll work for fine beards, average beards and thick beards. We also like that it comes with some useful grooming tools for the uninitiated, including trimming scissors, a wooden comb, a wooden bristle brush and a travel bag, which, with this travel-friendly size, you’re going to want. 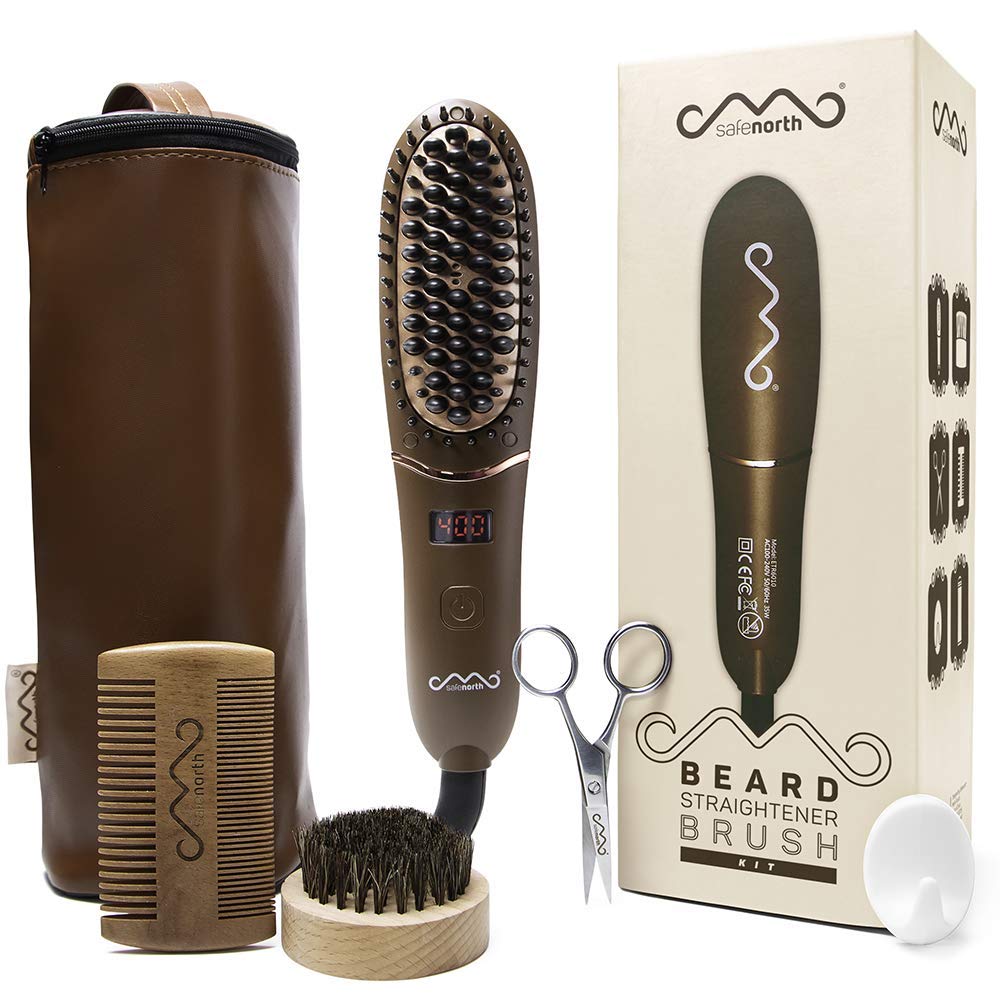 For a beard straightener that actually delivers on the idea of a 3-in-1, check out The Beard Struggle 3-In-1 Heated Beard Brush + Straightener. You’ve got heat, you’ve got a brush and you’ve got a hair pick / comb, which is incredibly useful for getting under and behind longer beards to keep your newly tended beard looking as voluminous as it actually is. 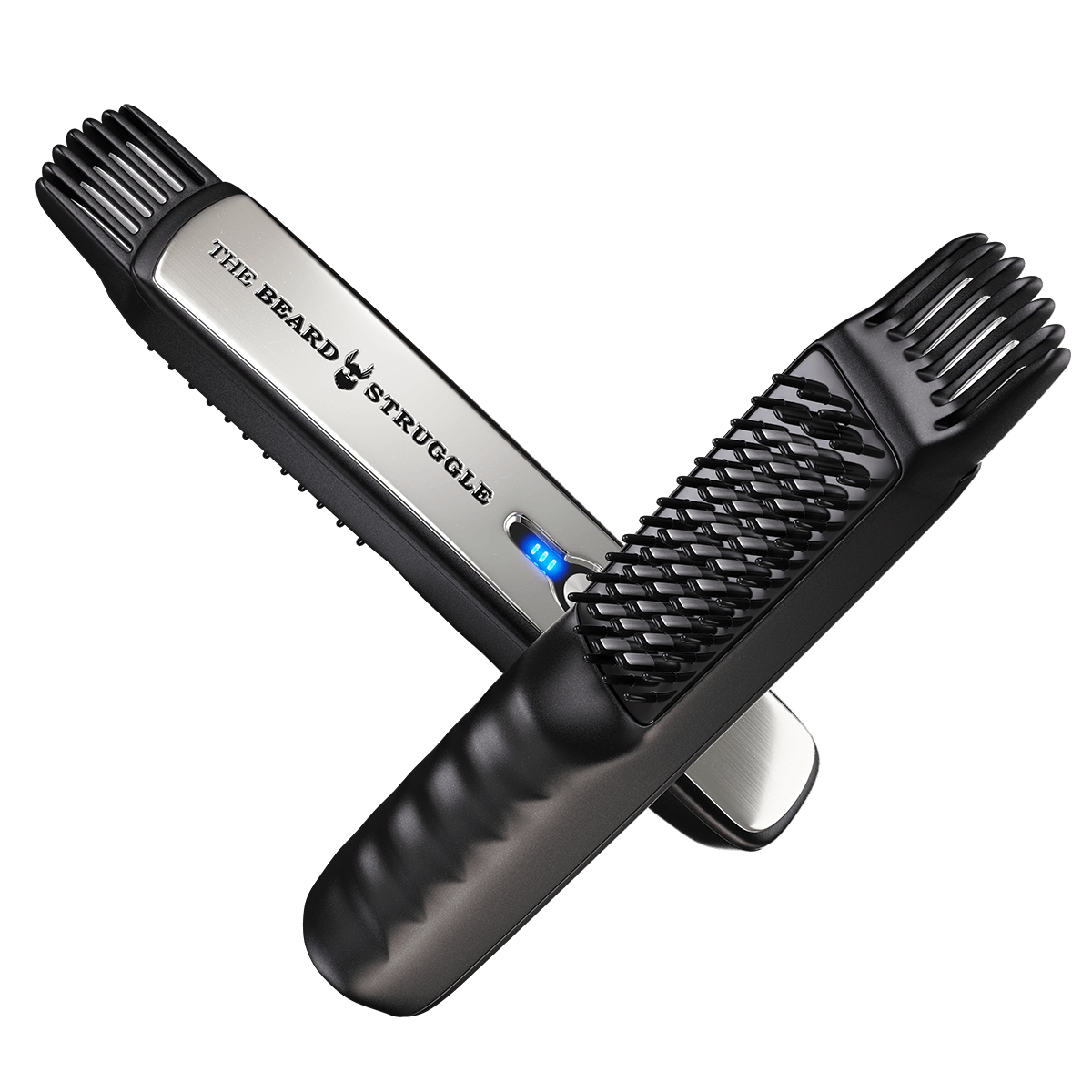 Courtesy of The Beard Struggle

If you’re looking for a traditional option that packs a punch and gets the job done, then Beardclass has the best beard straightener for you. This straightener is functional and has great features like an auto-off function, a 40-second warm-up time and a swivel cord. Also, it comes with two comes and a pair of scissors to help you groom your beard. 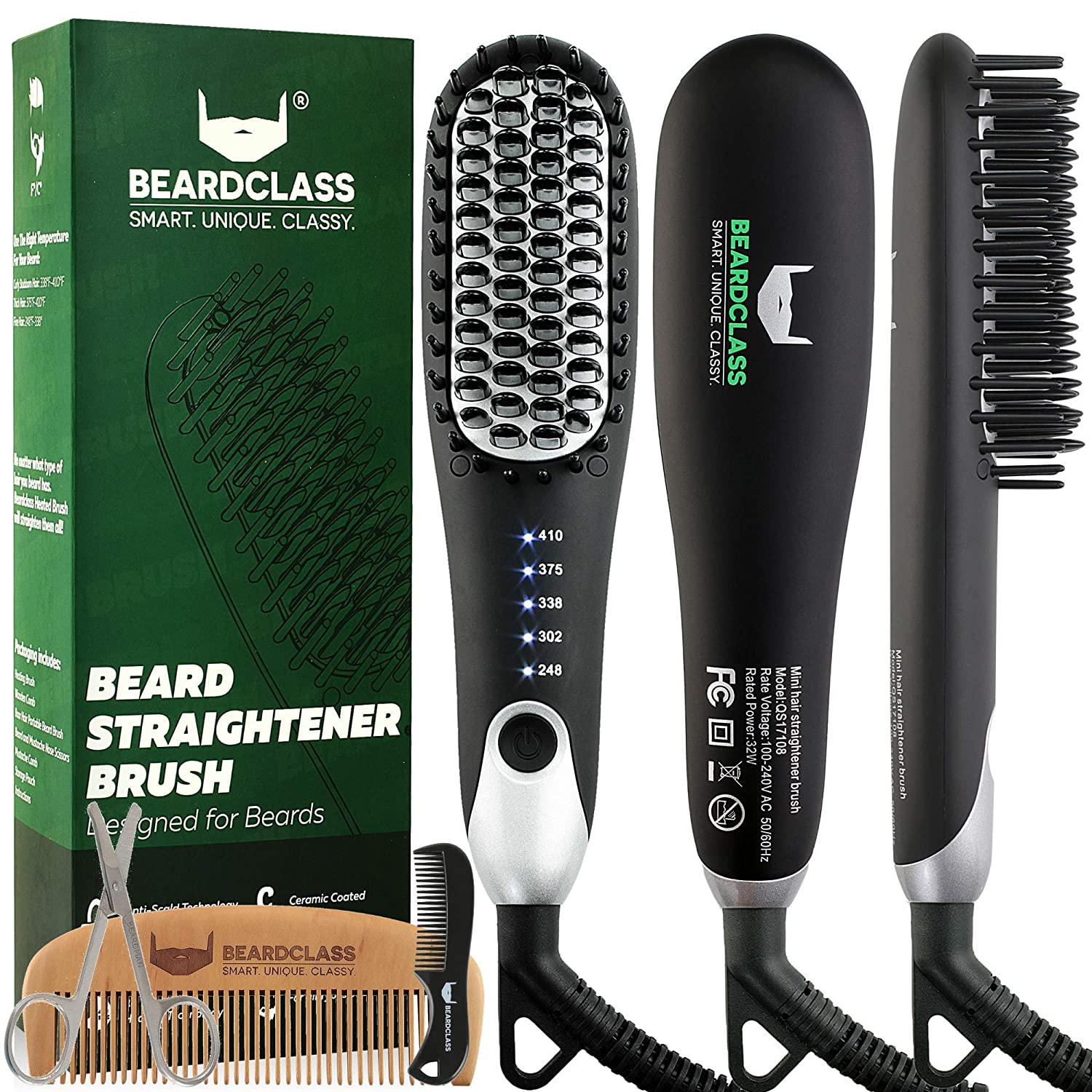 Yibi provides a straightener that’s functional and safe to use on every beard type. It features negative ion technology that helps beard hair stay hydrated and moisturized while also preventing heat damage and making sure that your beard remains polished and healthy. It’s portable and comes with a tote sack that helps to make transporting it swift and easy. Also, it comes with light indicators that make usage easy: the green light setting is best for those with thick, coarse hair, and the red light is best for those with long curly hair. But best of all, it’s cheap enough that you can totally justify giving it a try. 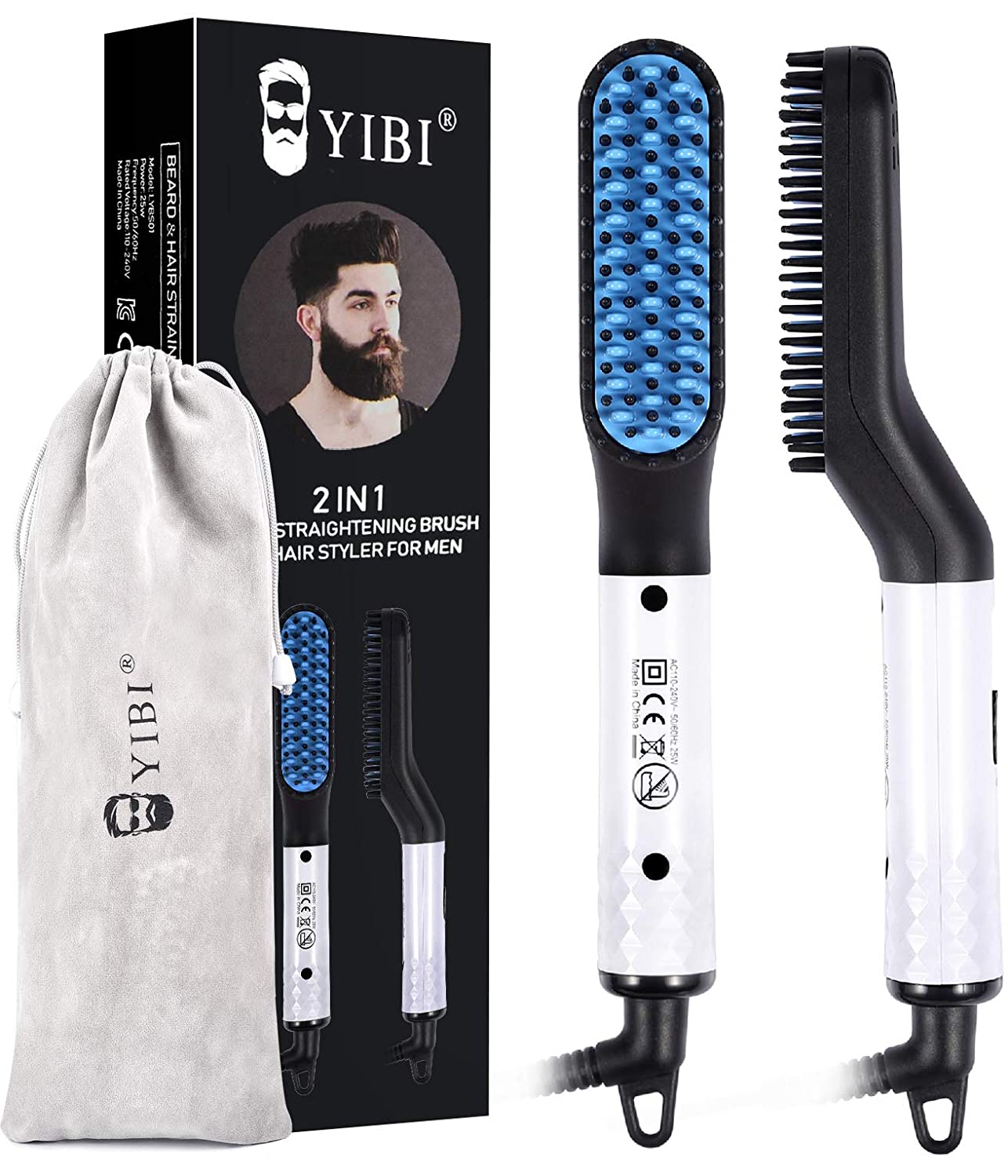 This beard straightener from Invjoy is cordless and rechargeable, which makes it perfect for travel and hassle-free usage. It features advanced iconic heat technology that helps prevent frizz when straightening the beard and helps to retain moisture within the beard. It also features temperature control and an auto-off feature. Finally, it’s also approved for usage on head hair for men and women as well. 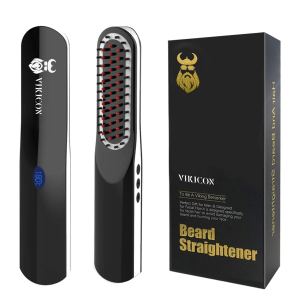 The more niche a category, the more useful the feedback from everyday users is. The Mannvlo Beard Straightener caught our eyes thanks to its 77% five-star reviews on over 800 ratings, which is multiple points higher than the next best-reviewed beard straightener. And users were pretty straightforward about what they loved about it: It works!

Sure, that’s a low bar to clear, but with so many lemons in the beard straightener market, it makes sense people would be thrilled just to have a straightener that works day in day out. Plus, it’s got all the essential features you’d want in the best beard straightener: Six temperature settings, 30-minute auto-shutoff, PTC heaters and ceramic bristles, a heat-resistant brush back, LED temperature display and a three-minute heat time. 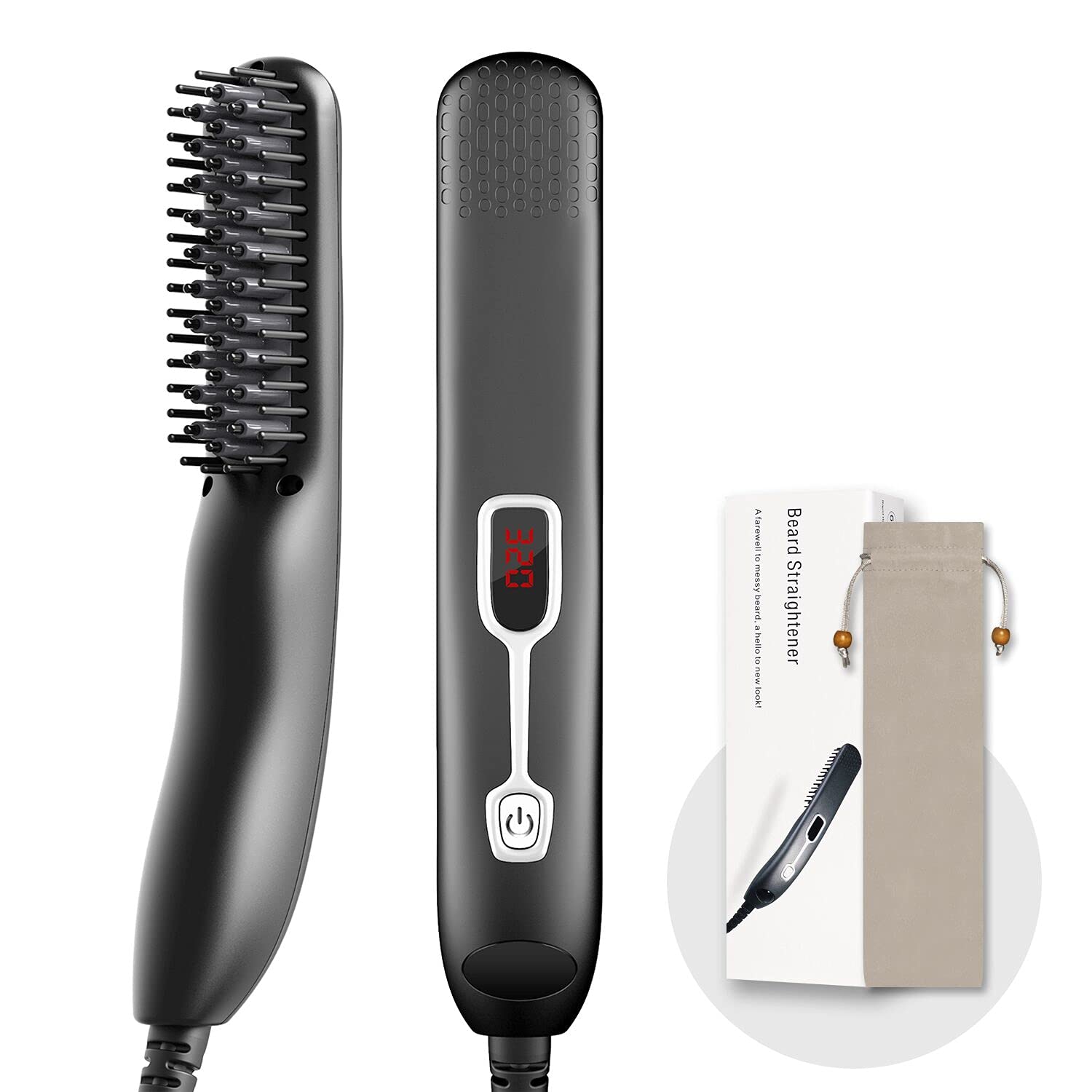 Beard Oils Will Help Tame Your Wild and Wiry Beard