Every college has one. Cody does fades in the dorm bathrooms in East Hall on Tuesdays after his 5 p.m. class gets out. He only charges $10 or a meal swipe.

Alongside the weed guy, that senior who buys booze for first years and the dude who walks around campus with a tail attached to the back of his jeans, every college has a DIY barber. It’s the kid from your calc class. It’s the kid who lives down the hall. It’s your roommate Greg. It’s completely casual on college campuses, and nobody ever bats an eye over it. 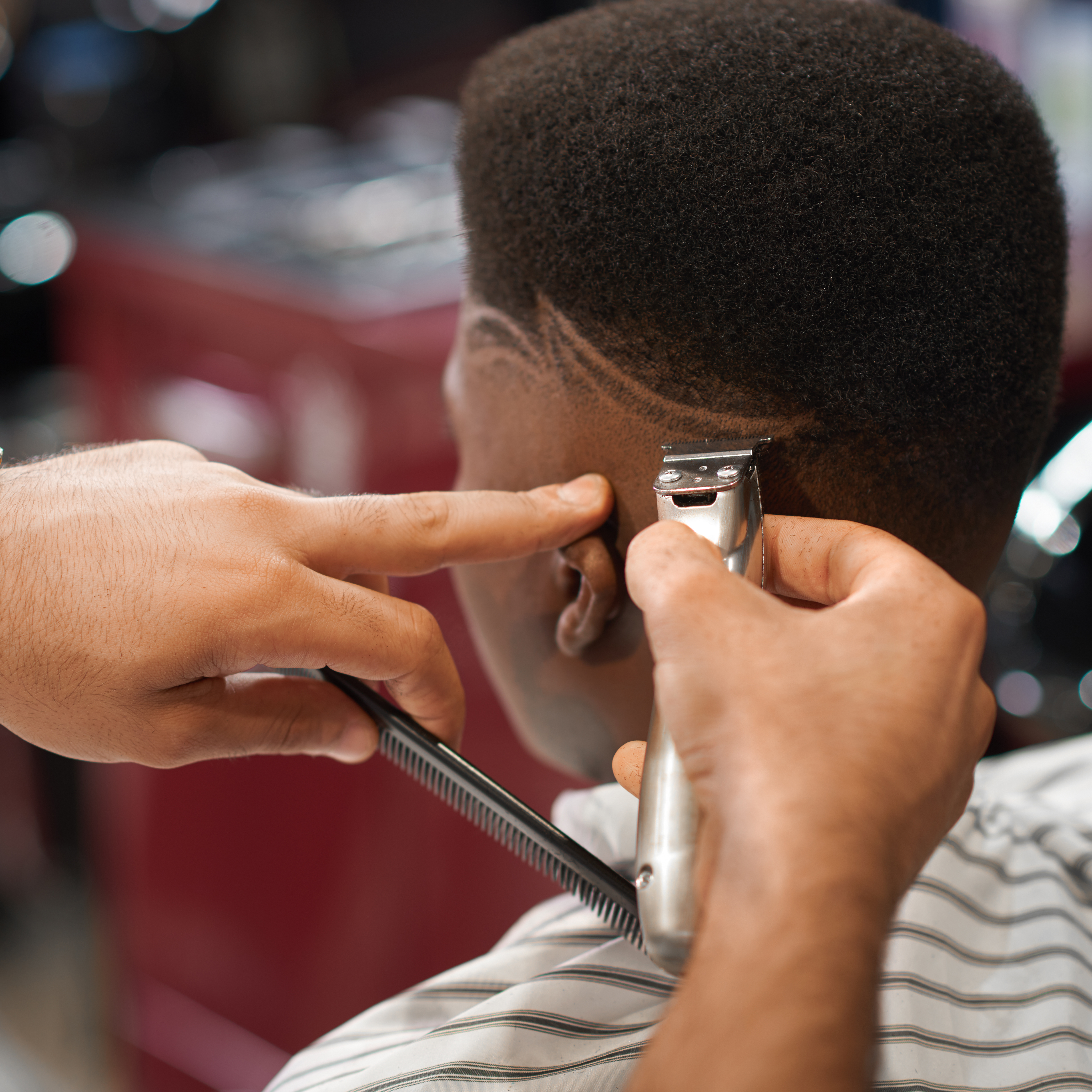 A few years out of college, I can’t help but wonder why this is such a universal experience on college campuses. After speaking with many of my friends, I’ve found that the majority would smirk and tell me, “Yeah, we had a guy that did that.”

But who are these campus-wide haircutters, and why did they start cutting hair? Was it something they had prior knowledge of? What kind of hair clippers were they using? Is it something that stemmed into a career post-grad?

So I posted an Instagram story asking my followers if they knew any college barbers I could chat with. And the response was overwhelming. Everybody knew somebody who used to cut hair on college campuses. And I spoke with some of them.

Ulysses Santos was a dual business administration and human resource major at Rowan University in New Jersey when he got a bit of a head start in his college barber career. Knowing that at college he was going to run track and would have to figure out an income, he began buzzing his high school teammates. That way, he’d be confident enough to market himself as a barber by the time he got to college. 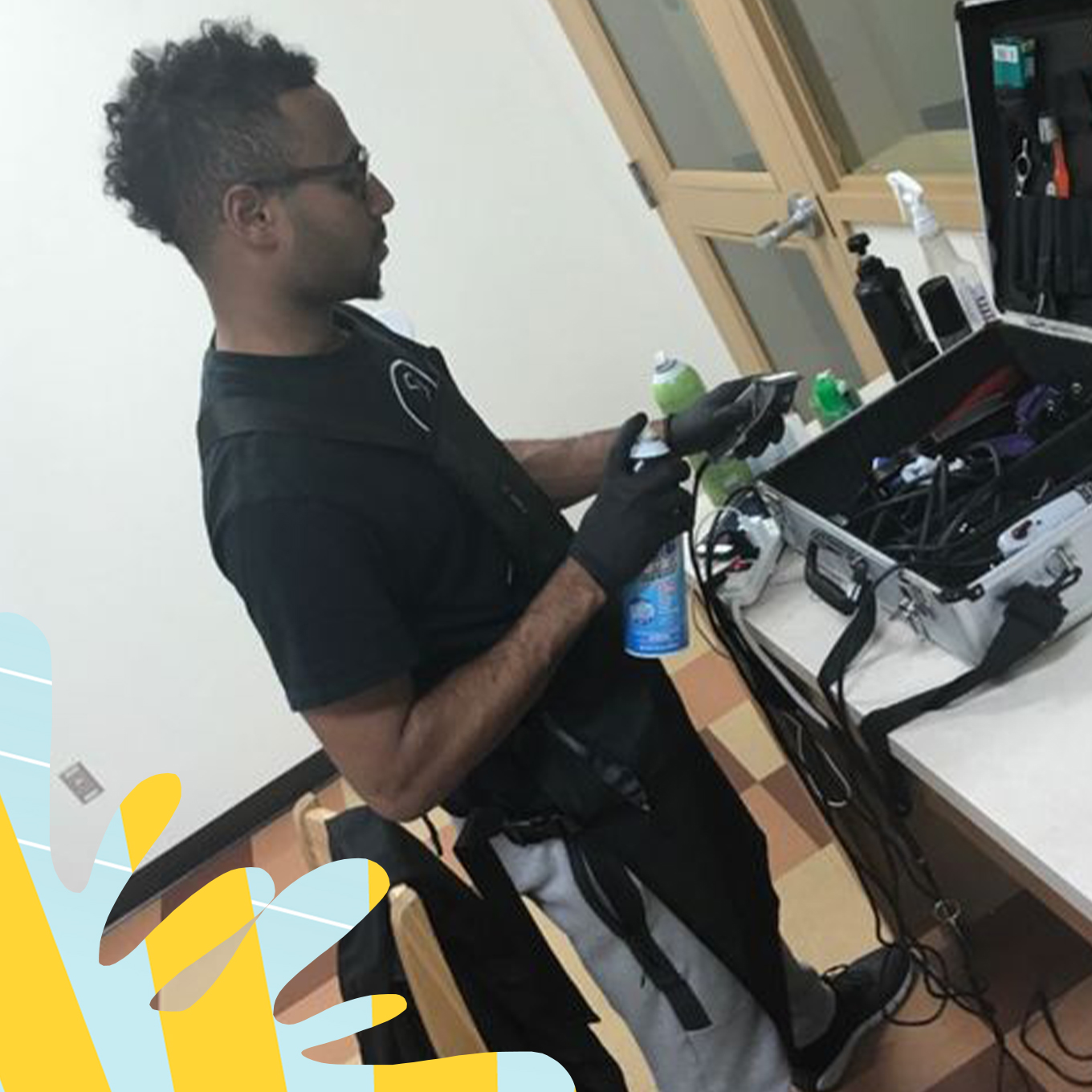 “On move-in day, I made sure I was done early and walked around campus door to door handing out business cards with my Instagram page. Everyone I talked to knew that if they ever needed a cut on campus to contact me,” Santos tells me. “After about two years on campus, I sold T-shirts with a QR Code so my clients would walk around promoting. It was always a conversation starter as everyone would ask what the code was for. The QR code would have my contact information and access to my Instagram.”

Santos initially charged $5 shape-ups and $10 haircuts, intentionally starting low because he understood money was tight as a student. His “shop”? People’s bathrooms, dormitory laundry rooms, fraternity houses — you name it. “Basically, anywhere I could put a chair, and that had an outlet.”

As someone who now works in full-time property management with a side hustle as a realtor, Santos looks back fondly at his college days cutting hair fondly. “Becoming a campus barber opened up a lot of doors for me compared to a regular student,” says Santos. “I was known on campus and connected with everyone. My roommates and I would never have to pay or have a ratio to get into parties, so I got the ‘brothers’ treatment for different fraternities without ever having to pledge or rush. In addition, the network I built with individuals in different careers was the best thing that came from being a campus barber.”

Although he doesn’t cut hair as much as he used to, he still sneaks a snip in every once in a while. You can find some of Santos’ cuts on his Instagram page, @cuttz_by_uly.

Santos wasn’t the only Jersey boy doing cuts in the dorms. While he was snipping in Glassboro, 45-minutes to the east, accounting major Andrew Blahut was cutting hair at Stockton University. Raised by two hairdressers, Andrew learned the basics instead. 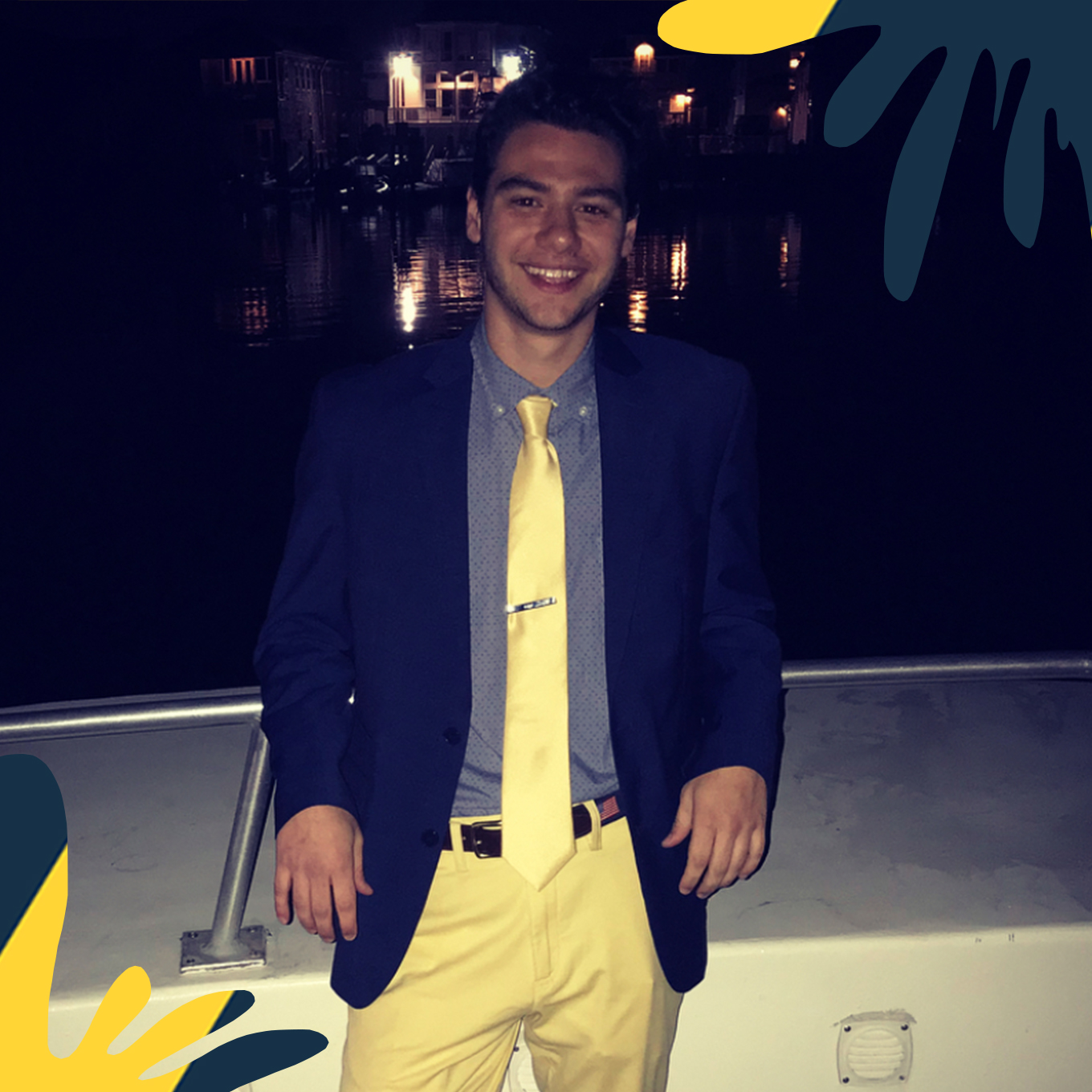 “I full-on learned freshman year by cutting people’s hair for free at first, absolutely butchering their haircuts until I got good at it,” Blahut tells me. Initially, he found himself cutting hair for free solely because he thought it was fun, but people began telling others, and he started making a little extra cash on the side. “I knew how expensive haircuts were, so I did them cheaper for friends or friends of friends,” he says.

Blahut would typically charge $10, but most would give him $20 as a tip. For close friends, he wouldn’t even let them pay, telling them instead to get him a round next time they hit the bars.

During his first year, Blahut cut hair in his dorm room but more frequently would overtake the dormitory’s common room. After that, Blahut would cut hair at whatever off-campus house he lived at. “Sometimes, if a group of people was at some other house, I’d just bring my equipment to them,” he says.

Now an auditor at a public accounting firm, Blahut admits he’s never stopped cutting hair. “I only do a few people now from my house that are close friends from my hometown,” he says. “But for anyone who wants to do it a bit more seriously in college, it’s a great way to make money and meet people.”

Although Blahut and Santos were known on their campuses as “the guy that does haircuts,” I found through my Instagram Story post that it’s not always a guy. As I well knew, since my former roommate Nina Flanders was cutting hair during our time at Pratt Institute in Brooklyn, New York. 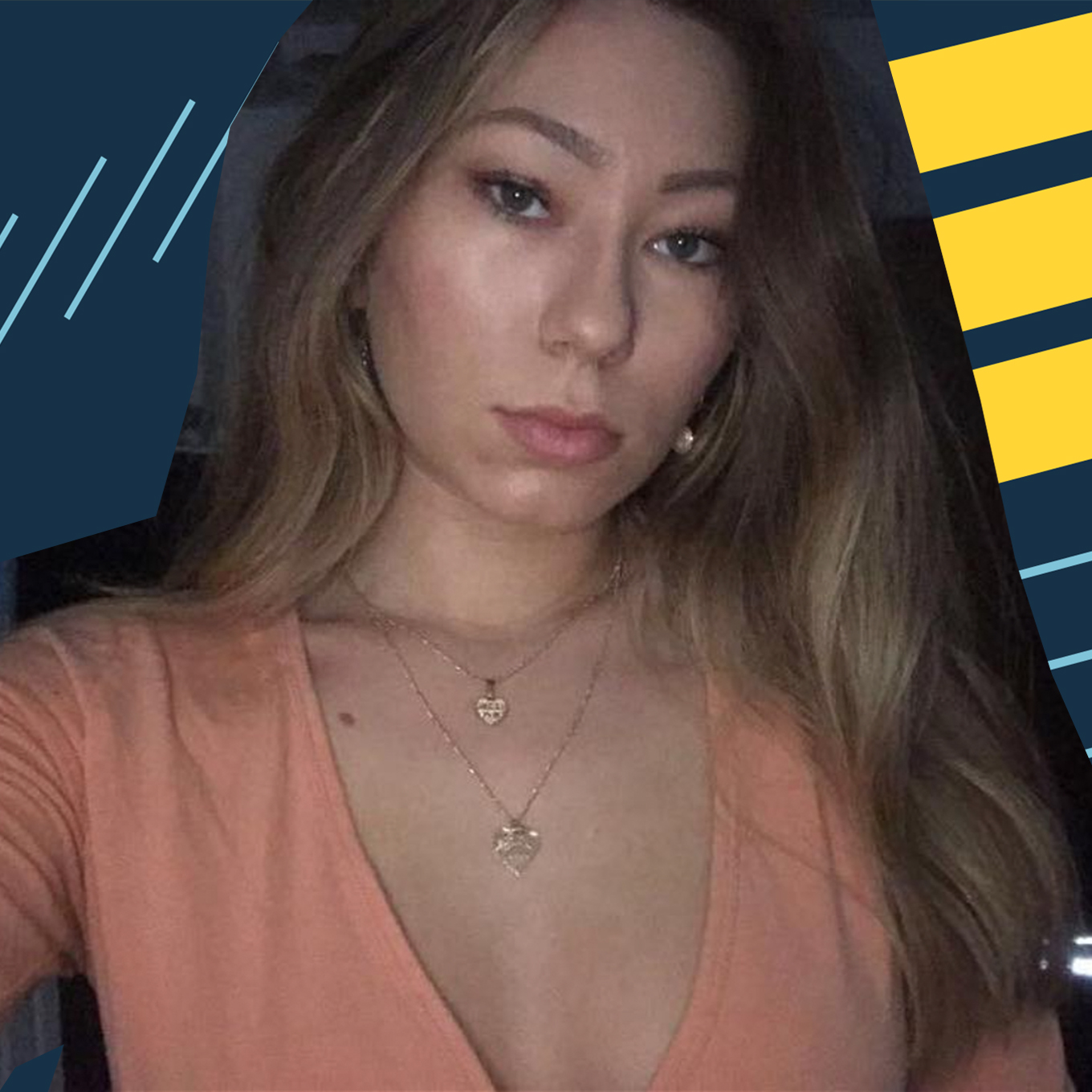 At Pratt, Flanders found herself in the institution’s award-winning fashion design program without prior experience cutting hair. But when she was a freshman, her roommate asked if she could cut her hair, and she became obsessed. “Hair YouTube is so easy to binge,” she tells me, “I couldn’t stop watching video after video, it’s the only reason I was able to properly learn to cut hair.”

Like Blahut, Flanders’ side hustle spread through word of mouth. But she didn’t charge a dime. “I never felt comfortable charging for cuts because it was just something I genuinely enjoyed doing — plus, I had no credentials. Maybe because I used it as a distraction from schoolwork,” she admits with a laugh. But Flanders also threw her DIY salon for a loop by adding not just cuts but color into the mix. “For bleach and color, I charged for the cost of the product, but typically, people always tip me.”

As a gallery assistant at a space in Manhattan, Nina tells me she also never stopped cutting and dying hair. “I just did a haircut yesterday!” she says.

What We Should Learn From College Hair Cutters

It seems that people start cutting hair in college for fun. Maybe it’s the mental break in their workload, the extra cash, or they just want to help a buddy out. But these past college haircutters haven’t stopped cutting hair. They continue to do it because they like to.

So college students, get that haircut from your on-campus barber. It’s cheap, reliable, and always leaves a story to tell. And maybe even launch a potential new friendship. 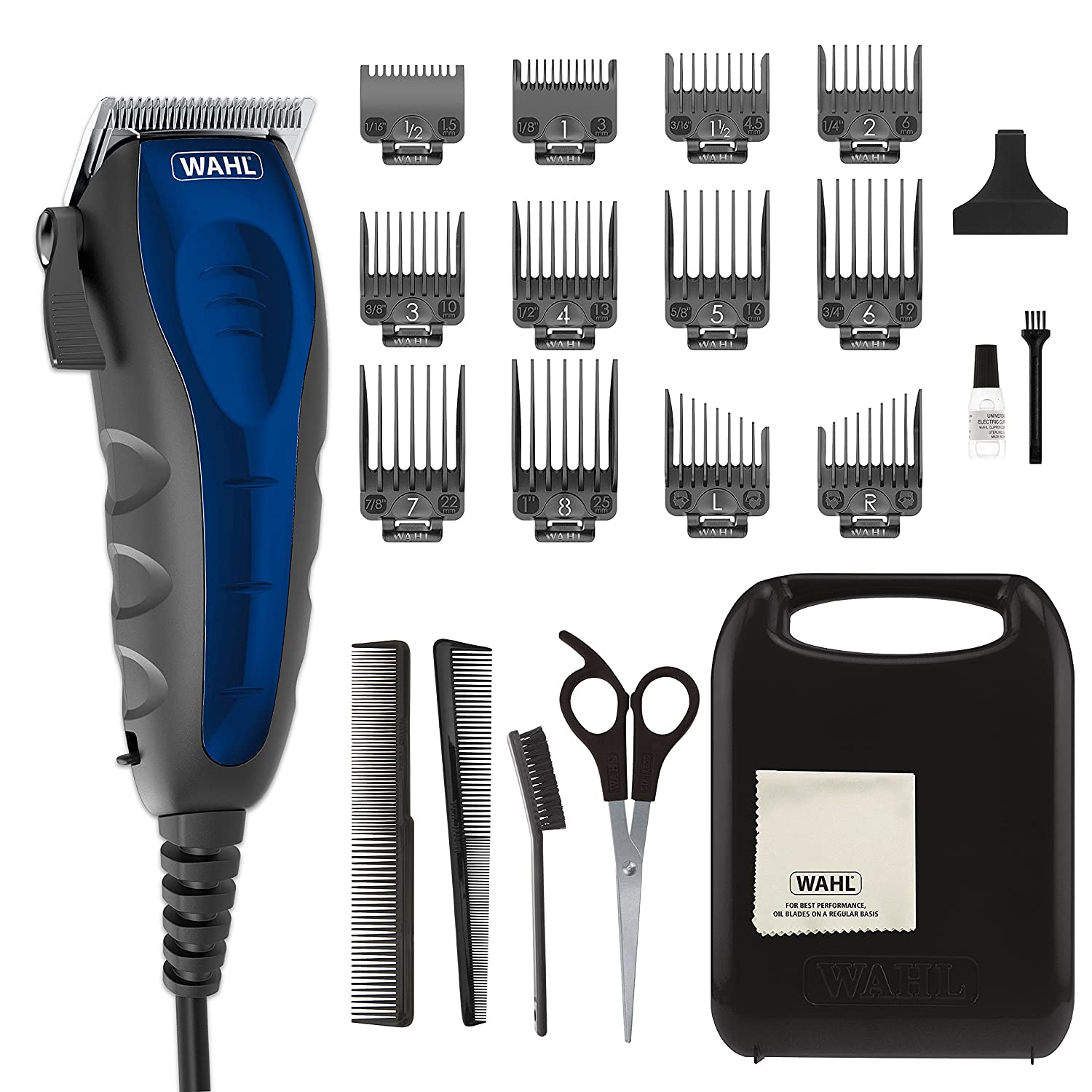 Buy Now on Amazon
The Best Beard Trimmers for 2022, Reviewed