* Strong hold without the shine
* Non-flaky and long-lasting
* Shapable, smooth pomade for all hair types

A lot of the time it seems like your only options in pomades make it seem like you’re stuck with the shine if you want the shape, but this matte pomade is a ridiculously popular option for those who don’t aspire to look like they’re going out for a role in Grease or trying to get cast in some remake of the John Waters classic Cry-Baby or perhaps Rebel Without a Cause.

It’s less than $12 for a jar of it, for one thing, and it offers a remarkably strong hold befitting the product’s brand: Smooth Viking’s “forming cream,” is a non-flaking pomade that keeps your hair’s shape in a holdfast-like grip, without giving you a greasy look or a flaky aftermath.

Designed to withstand humidity and sweat, this forming cream is suitable for a broad range of hair types, from tight and curly, to thin and straight. This “Smooth Viking” pomade lives up to its name, with unisex ruggedness (just like the Vikings!) that provides an epic hold even when going on adventures, or sitting through a long aurora-filled night of listening to sagas and swilling Viking ale. Or perhaps “giant’s milk,” if you’re that kind of Viking. 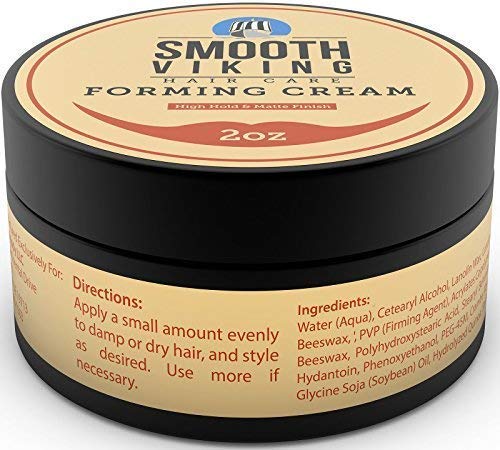 This pomade lets you chose a shape for your hair in the morning and not worry about looking like you’ve just escaped from a Game of Thrones episode by 5pm. And it can be subtle, too. You don’t have to shellack your hair into a shape like some caricature of an Elvis impersonator in order for it to work. It’ll do for hairstyles ranging from the laid back to the clean cut, so you can rock this as a mod, rocker or whatever, as much as a greaser.

It’s designed to be low maintenance, so you can set your hairstyle with confidence and then think about other things, like who’s who in the Edda, which helped inspire, well, just about every fantasy epic in the movies or on TV. Or whether it’s true that Norse culture got inspiration from the enterprising Minoans, who apparently set up an outpost in present-day Sweden to buy Baltic amber from the tribes who lived there, some 3000 years before the time of Erik the Red. Or you know, you could just use this to style your hair and move on from there.

The Best Hacks For Hair