We never thought the day would come, but, it has. Everyone and their mother is rocking a mullet in 2021.

You know what mullets are — business in the front, party in the back. There is a slew of buzzed mullet styles people can choose to get done nowadays, but specifically speaking, mullets need to have a short-ish top and long, squirrelly bottom toward the neck in order to be deemed a “mullet.”

Though they’ve been a Brooklyn staple for a little bit now, they became more popular toward the end of 2020 when celebrities such as Miley Cyrus (who clearly took notes from her father), Rihanna, Troye Sivan and more recently, Zac Efron, gave the cut a try.

But, why now? The mullet trend faded decades ago, so why does it seem everyone has a mullet?

The answer in short: quarantine.

You’ve had the urge before. You’re so bored, you want to do something stupid just to live a little. Shave your head, bleach your hair, get bangs — whatever. The trend seemingly reemerged mainly because people were bored. It’s a style that can work well in Zoom meetings since nobody can see the back of your head, it’s entirely gender neutral so everyone can look good in it and it’s a way to satisfy the consistent mental breakdowns you’ve been having over the past year. It’s a win all around.

Since the beginning of quarantine, people unintentionally grew enough hair to make the mullet a possible hairstyle to have, given the fact that nobody was really able to go out and get a haircut. For some, the mullet became a sort of middle ground hairstyle — something to do while you can since you won’t be able to in the future and something that you can cut even more to look like something more “normal” in the future.

Brooklyn-based fashion designer Rachel Lee tore her locks off a couple of months ago and went for a shaggy mullet herself. “I just wanted to look like Joan Jett,” she said. “I’m glad mullets are cool now because the look is so iconic, I wanted in.”

Simultaneously, Ohio State University student Spencer Wainfor buzzed his sides to rock a more in-your-face kind of mullet for men back in September. “I wanted to use quarantine as an opportunity to try out a new hairstyle that I knew I’d be able to change if I didn’t love it,” he explained. “In early April, I shaved it all off and didn’t love it. By September I had this style and I loved it a lot”

There you have it. The time for a mullet is now. You’re never going to get another chance in your life to do something as drastic, so we say why not? Shock the world.

If you’re looking to have your 2007 Britney moment and shave your head in the comfort of your own bathroom, snag a pair of buzzers and go to town. All you have to do is buzz each side as dramatically as you’d like and bam, mullet. This buzzer from Wahl will help you get it done. 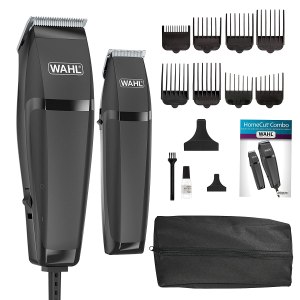 Although we love a good ‘ole DIY experience, if you want to get it done professionally, you’re in luck. Since the trend has become so popular, there’s no way in hell your local hairdresser hasn’t cut at least one mullet in the past couple of months. Pop in, lay down the law and leave with the haircut of a lifetime.

I Started Losing My Hair at 18; Shaving My Head Was One of the Best Decisions I’ve Ever Made