Do you want your beard and mustache to look their best? OK, so how come you don’t own any beard scissors or mustache scissors?

Unlike other kinds of grooming products (e.g. beard oils, beard washes and beard conditioners), which definitely do help maintain the appearance and quality of facial hair, a great pair of beard scissors or mustache scissors will likely never need to be replaced, as long as you don’t abuse them or use them professionally.

Sure, we wouldn’t recommend canceling your standing monthly appointment with the barber just yet, but even casual beardsmen can get a few extra weeks in between appointments with just a little strategic trimming. Given the lack of replacement costs and fewer appointments, that money will add up quickly, not to mention you’ll be learning a new self-grooming skill.

Though there is a small learning curve at the beginning, in our experience, as long as you don’t bite off more than you can chew, learning to do small touch-ups with a pair of razor-sharp scissors is as easy or easier than learning how to shave.

Plus, figuring out what to buy for your needs is pretty straightforward. Longer scissors (typically around 5 inches) are generally better for beards, small-to-medium scissors (typically around 3 to 4 inches) are better for mustaches and hard-to-reach places like noses and ears. Most beard and mustache scissors have pointed tips, but some smaller scissors have rounded tips, which is a heck of a lot better for getting at nose hairs. Practically all scissors are made from stainless steel for durability too, so again, you’ll likely only need to buy once to enjoy for the foreseeable future.

So, all that being said, we ask you, what are you waiting for? We rounded up a few great beard scissors and mustache scissors below. Check them out and take one of the easiest steps you can to upgrade the look of your beard and mustache.

For a great pair of scissors for your beard or mustache, we like the Ontaki Beard Mustache Scissors. These 5-inch scissors are made from top-quality Japanese steel and are extremely sharp and precise, perfect for hefty cuts or delicate cuts. They also come with a removable finger rest, adjustable tension knob to make the scissors cut faster or slower and rubber comfort ring inserts because your fingers will get sore during extended use without them.

Overall, reviewers praised these scissors for their sharpness and ease of use for trimming mustaches and beards, whether their own facial hair or that of customers in the case of one master barber. 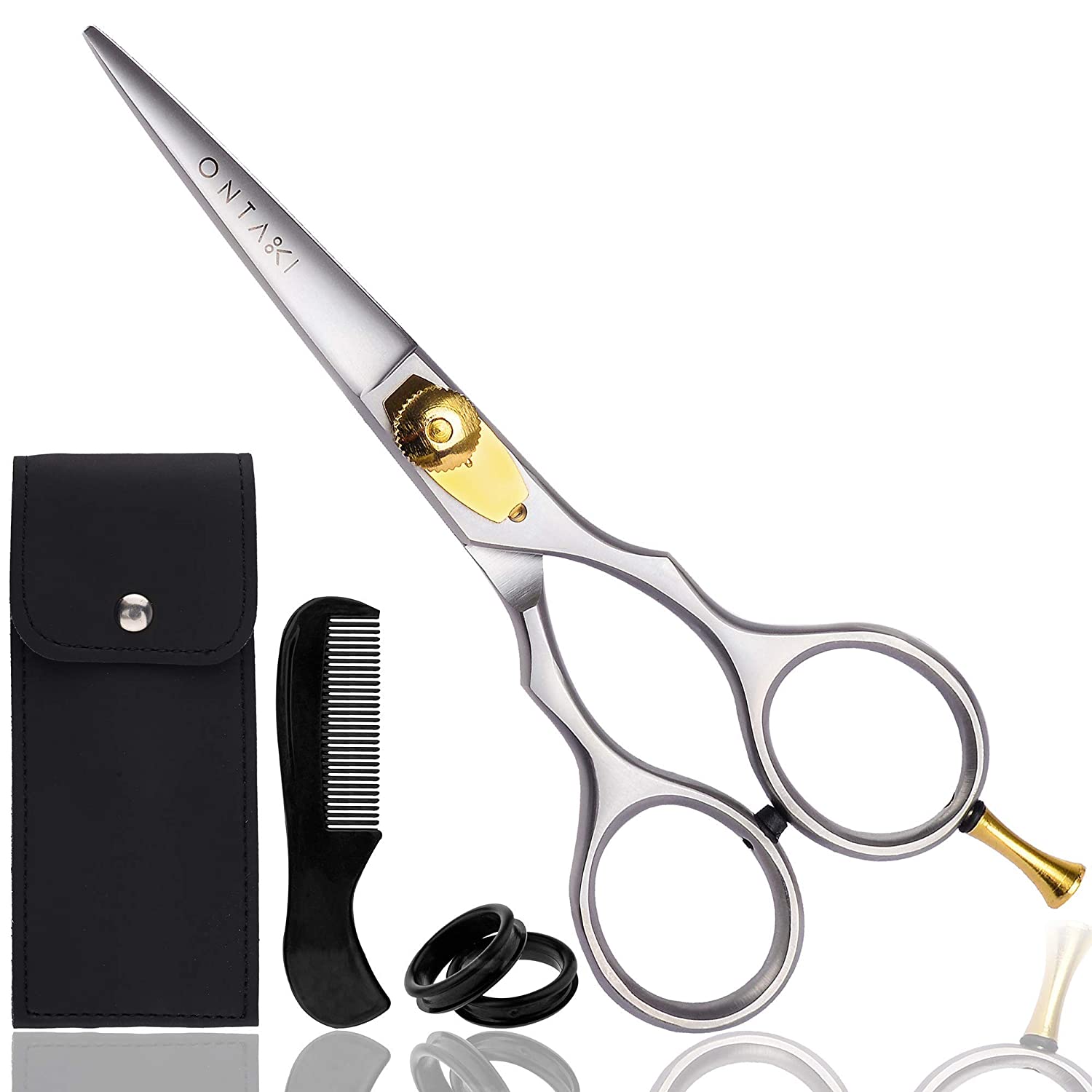 For another excellent pair of beard or mustache scissors, we recommend the Suvorna Beard & Mustache Scissors. Digging into reviews, we found that Suvorna delivered what it promised. Both pros and home grooming enthusiasts praised these 5-inch Japanese steel scissors for their sharpness, hand-feel and precise cuts as well as the included rubber inserts, carrying case and finger rest. The only thing to be wary of is the occasional dud. One user bought a third pair of these (because he liked them so much) but found the tension screw wouldn’t turn. If that’s the case, Suvorna offers a 60-day free return policy and lifetime warranty, so you can at least get your money back, no questions asked. 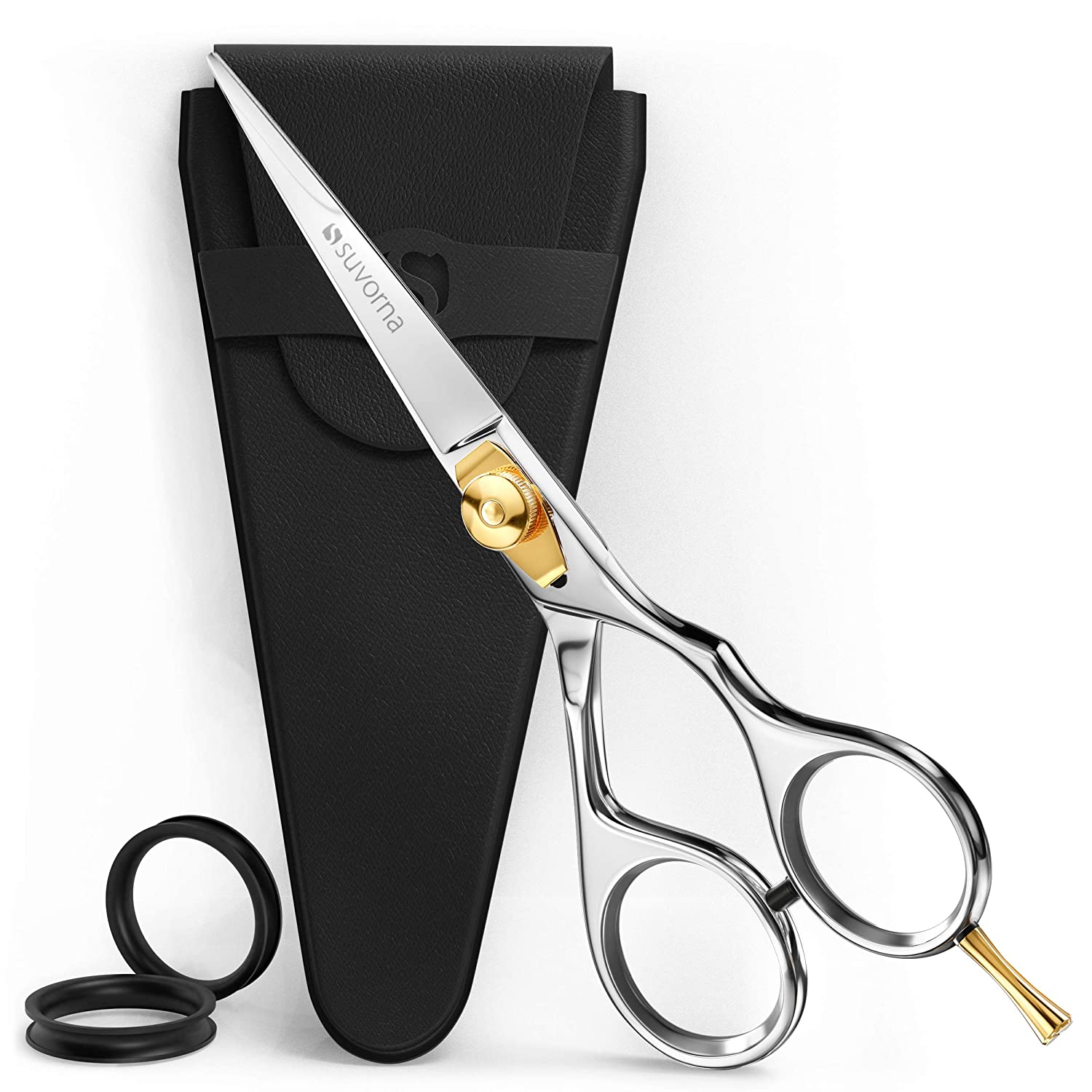 Though the standard beard scissors tend to be about 5 inches, if you’re dealing with longer hair or simply trying to cut a ton of hair at once, you might appreciate a slightly larger pair of scissors, like the BRV Men Mustache and Beard Scissors. Measuring in at 5.5 inches with 2.1-inch blades, these highly-rated, ergonomic stainless steel scissors will take a little effort out of the cutting process. Plus, they come with rubber inserts and a finger rest too. 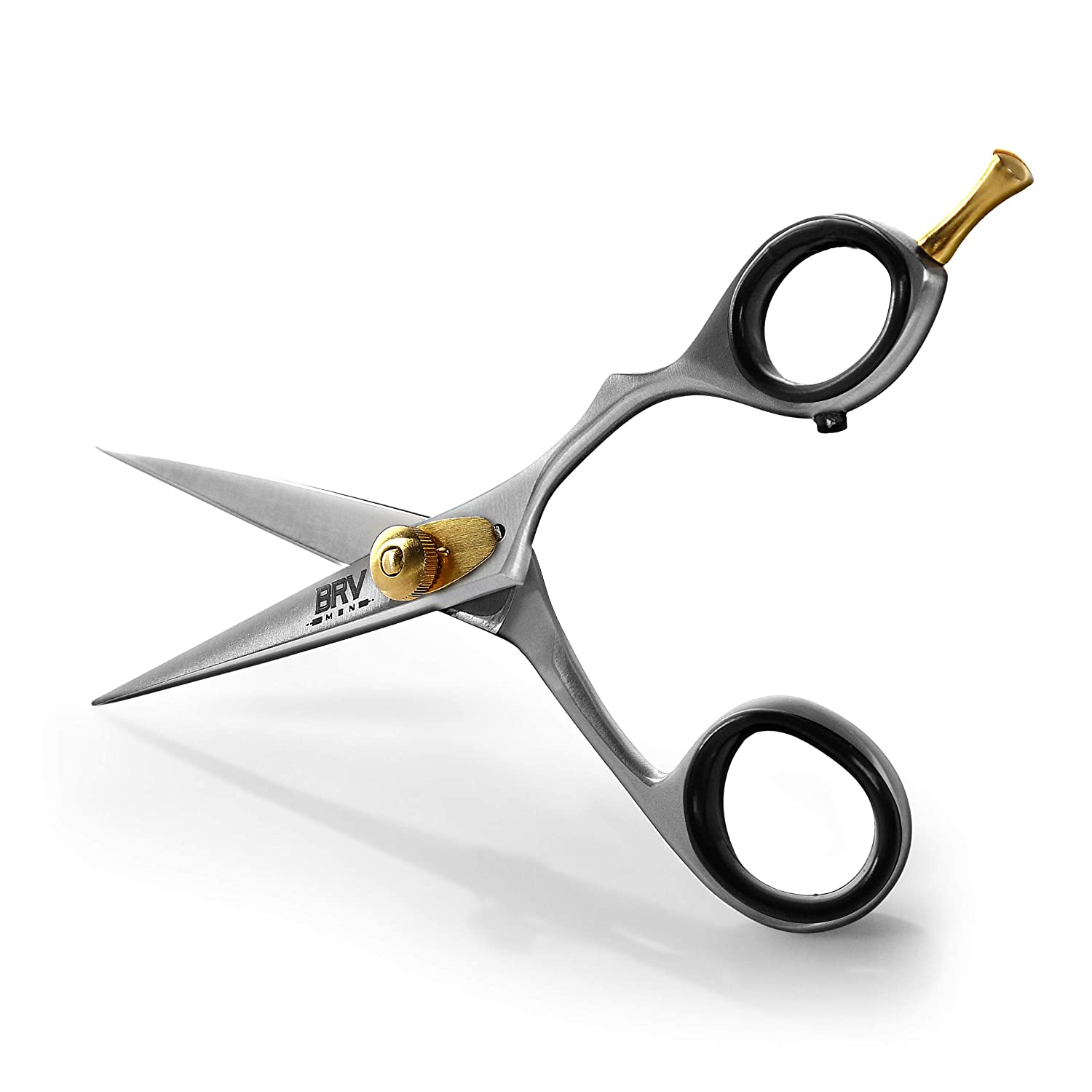 We could easily call the Meister Professional Hair-Cutting Shears the most versatile beard scissors, but they’re only more versatile because they’re larger than most beard scissors at 6.5 inches. Not only will these scissors make quick work of even the roughest beards, but you can also easily take them to the hair on your head too. (Please don’t do that unless you know what you’re doing!) 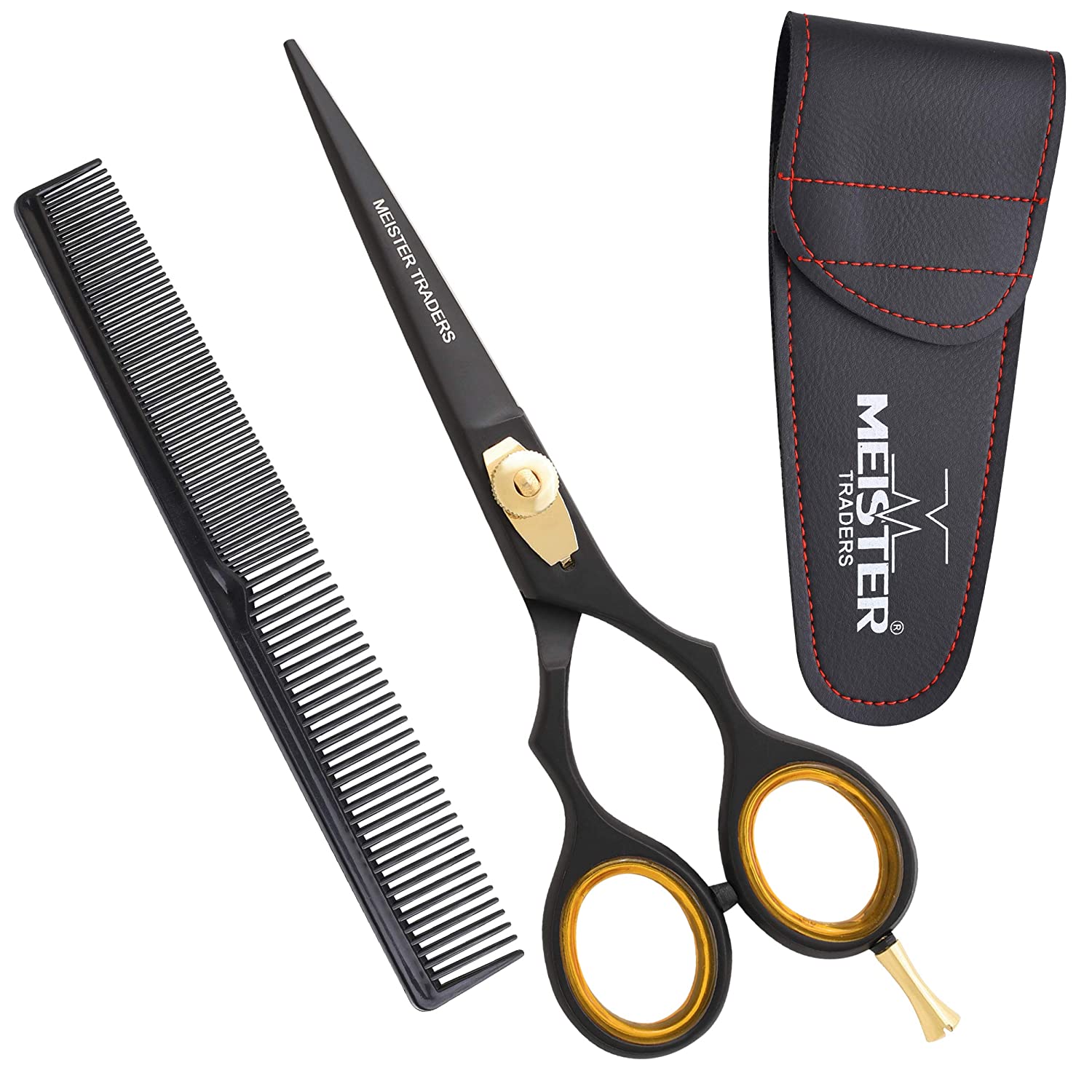 Flipping to the smaller-than-usual side of beard scissors, check out the Smith Chu Beard & Mustache Scissors. At 4.5 inches, these scissors will offer greater control and precision as well as more room for error because mistakes will simply be less obvious. Not that you should get careless: These scissors are still plenty sharp to make short work of whatever hair you throw at it. 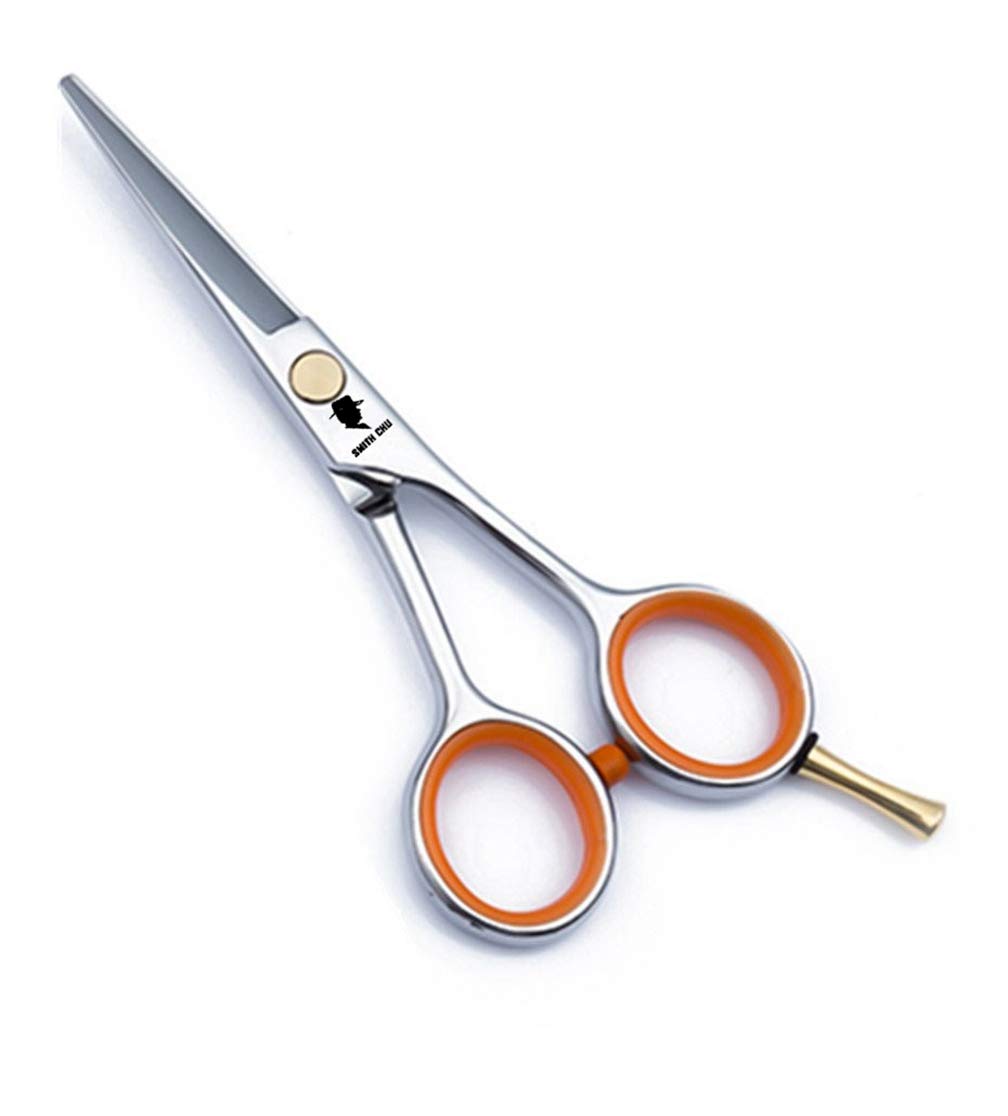 For ultra-precise cuts or for trimming in hard-to-reach places like noses or ears, go for the Motanar Professional Grooming Scissors. Measuring around 3.5 inches, these scissors would be terrible for a full beard trim but their size is perfect for a mustache touch-up. 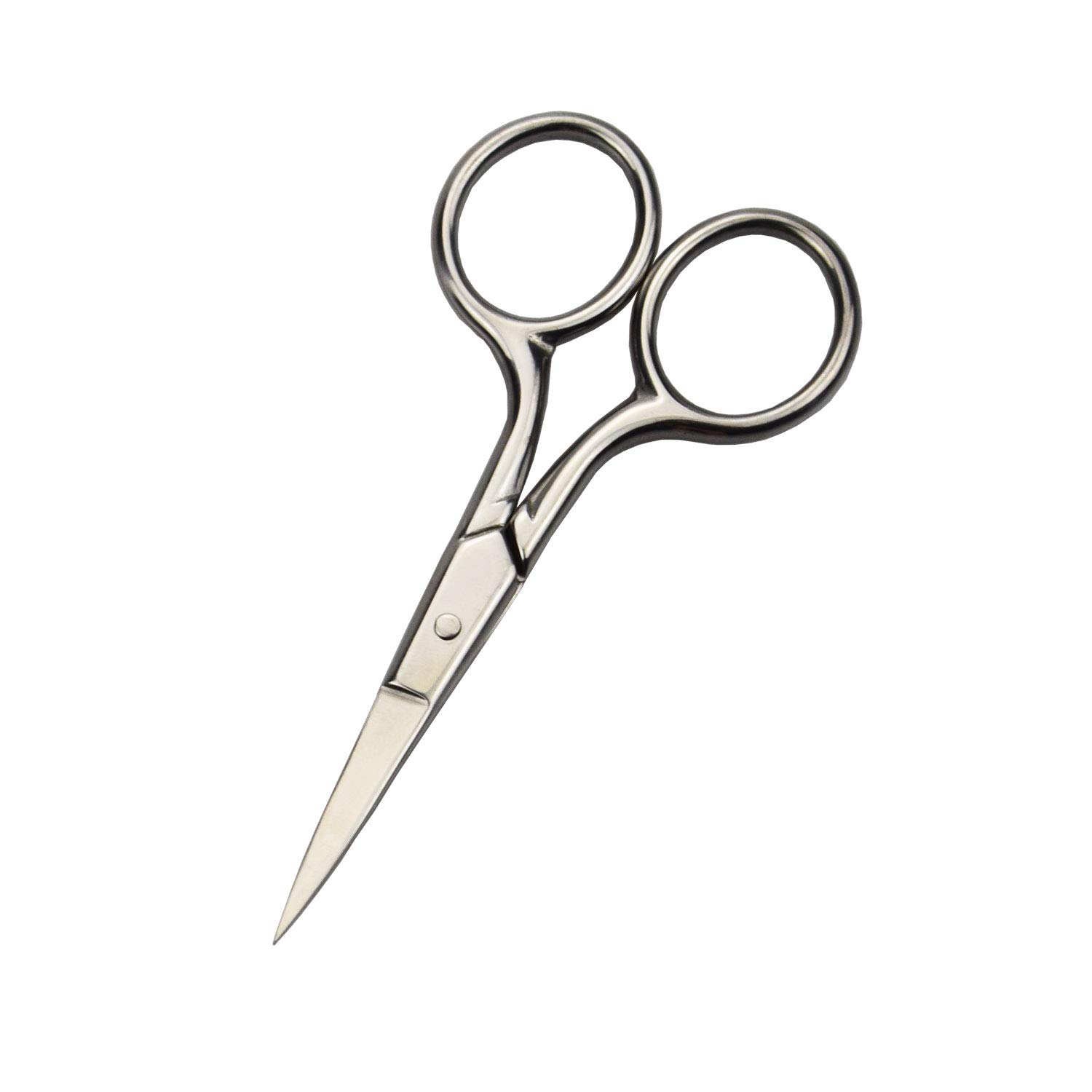 If you’re new to self-grooming with beard and mustache scissors, rounded tip scissors like the Livingo Rounded Tip Scissors can give you a little more peace of mind about poking yourself in the face. The rounded tip also makes these scissors great for trimming sensitive areas you can’t see as easily like noses and ears. Alas, as 3.5 inches, these scissors aren’t great for a full facial hair trim, but they make for much more peaceful touch-ups. 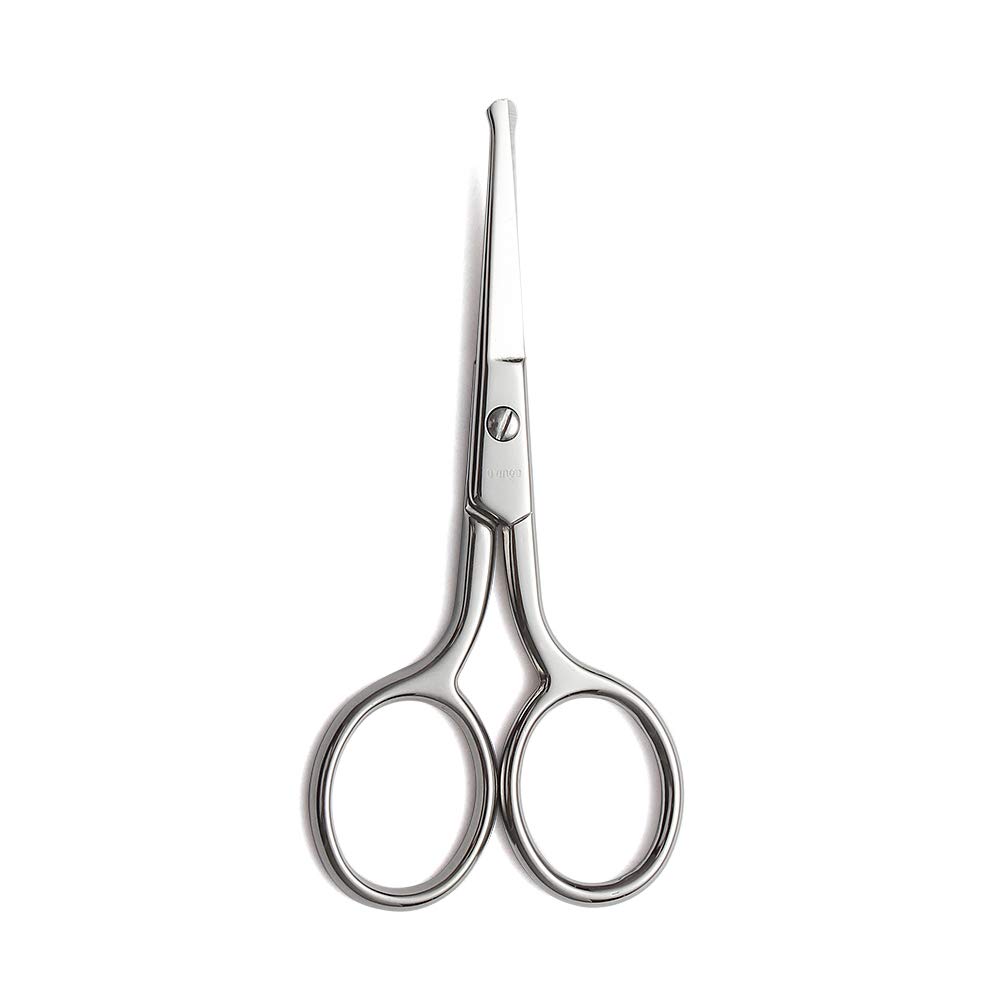 If you’re not sure where to start, the Beardclass Beard and Mustache Scissors Kit has the essentials you’d need for a personal trim. The kit includes a pair of 6.5-inch beard scissors, a 3.5-inch pair of rounded tip scissors, a portable mustache comb and a convenient carrying case.

For the price of one of some of the other beard scissors, you can get two useful pairs that will both help bring your beard under control. 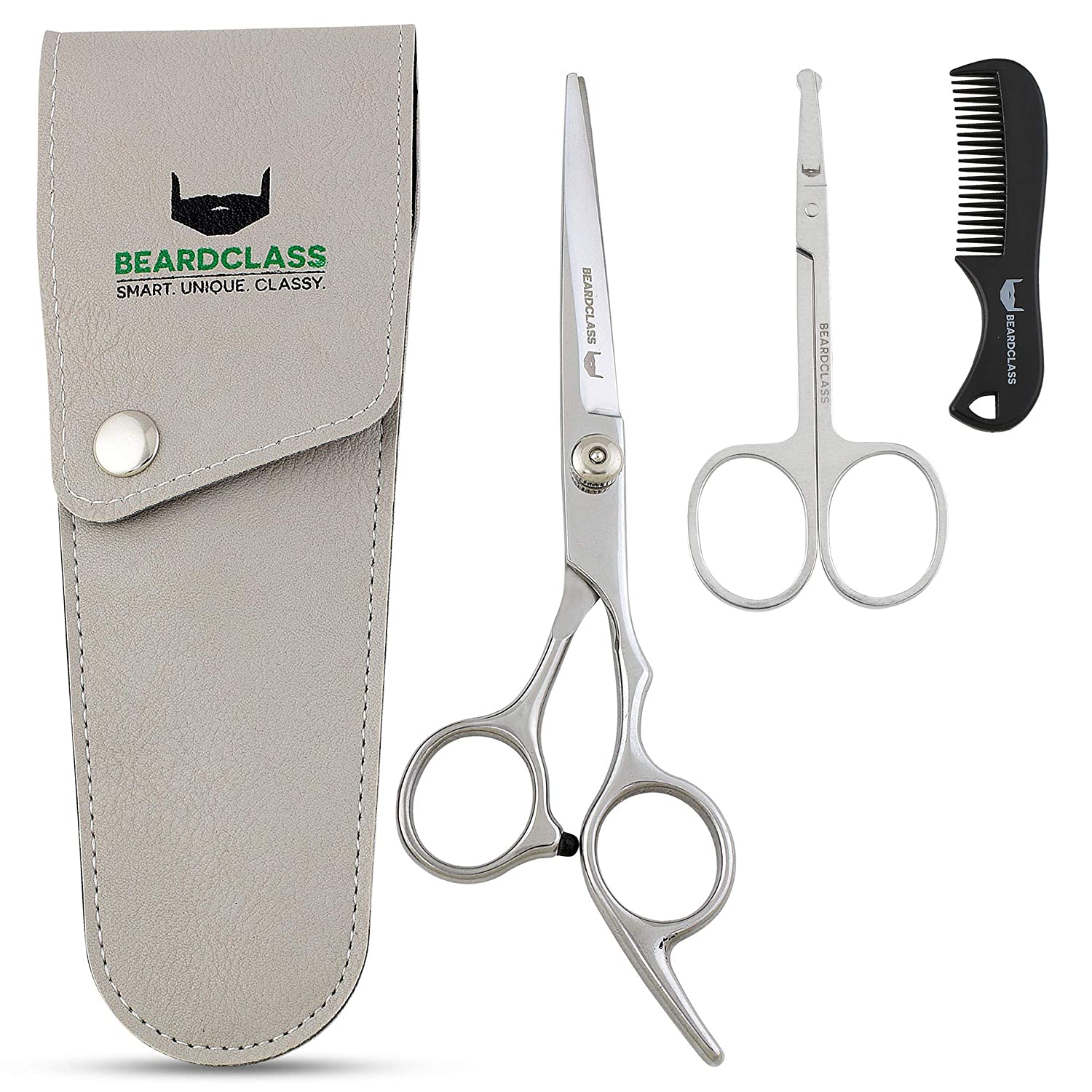 Beard Balm vs Beard Oil: What Should I Buy if I Only Want One?