If you shave every day or have particularly sensitive skin, you should consider adding a pre-shave oil into your shaving routine. The idea behind pre-shave oils is pretty simple: A bit of oil on your face — and we mean it when we say just a bit — adds a great deal of lubrication and slickness, especially underneath a shaving cream. The upside of that is a lot less razor burn and skin irritation, fewer razor bumps and generally a cleaner cut and razor glide than you wouldn’t get with just a shaving cream or no shave product at all.

In addition to extra lubrication, pre-shave oils help stand up facial hair as well as condition and moisturize your skin, which will leave it smoother and healthier despite having a sharp blade repeatedly dragged across it. Essentially, they are to your skin what good beard oil is to your facial hair and so unsurprisingly they both use a lot of the same oils and ingredients. For that reason, a good pre-shave oil can also make for a great post-shave moisturizer too.

Most pre-shave oils are meant to be used with a great safety razor, but they’ll work with disposable razors for improved glide and an overall more comfortable shaving experience. There are even pre-shave oils designed with electric razors in mind too, so however you keep your face and facial hair in check, you can bring a pre-shave oil into the mix.

A little bit of oil goes a long way, so all you have to do is massage a few drops of oil into your skin, let it sit for 30 seconds (or longer if you like for increased skin absorption), apply your shaving cream and you’re good to go. You can even use the pre-shave oil alone, but we recommend using quality shaving cream or shave butter most of the time because let’s face it, your mug deserves the best shave experience possible.

Shaveology is relatively new to the facial hair game, only established in 2014, but the company has swiftly developed top-quality shave products. That includes the Shaveology Lubricating Pre-Shave Oil. This pre-shave oil strikes the right balance between too many and too few ingredients, giving you just the right amount of the good stuff to ensure a smooth and pain-free shave. In addition to oils like safflower, avocado and jojoba, this formula also contains vitamin E for added moisturization and caprylyl glycol, which is antibacterial and helps with skin inflammation. The bottle also makes use of a shampoo-style opener so you don’t accidentally pour out too much oil.

It has no added fragrance, so you’re not getting an overpowering scent that will clash with any shaving cream or aftershave. But perhaps the best part is that Shaveology guarantees the bottle for a year, so if you don’t like it as much as we do, you can send it back for your money, no questions asked. Add in the reasonable price for two ounces of oil and you can see why this is our best overall pre-shave oil. 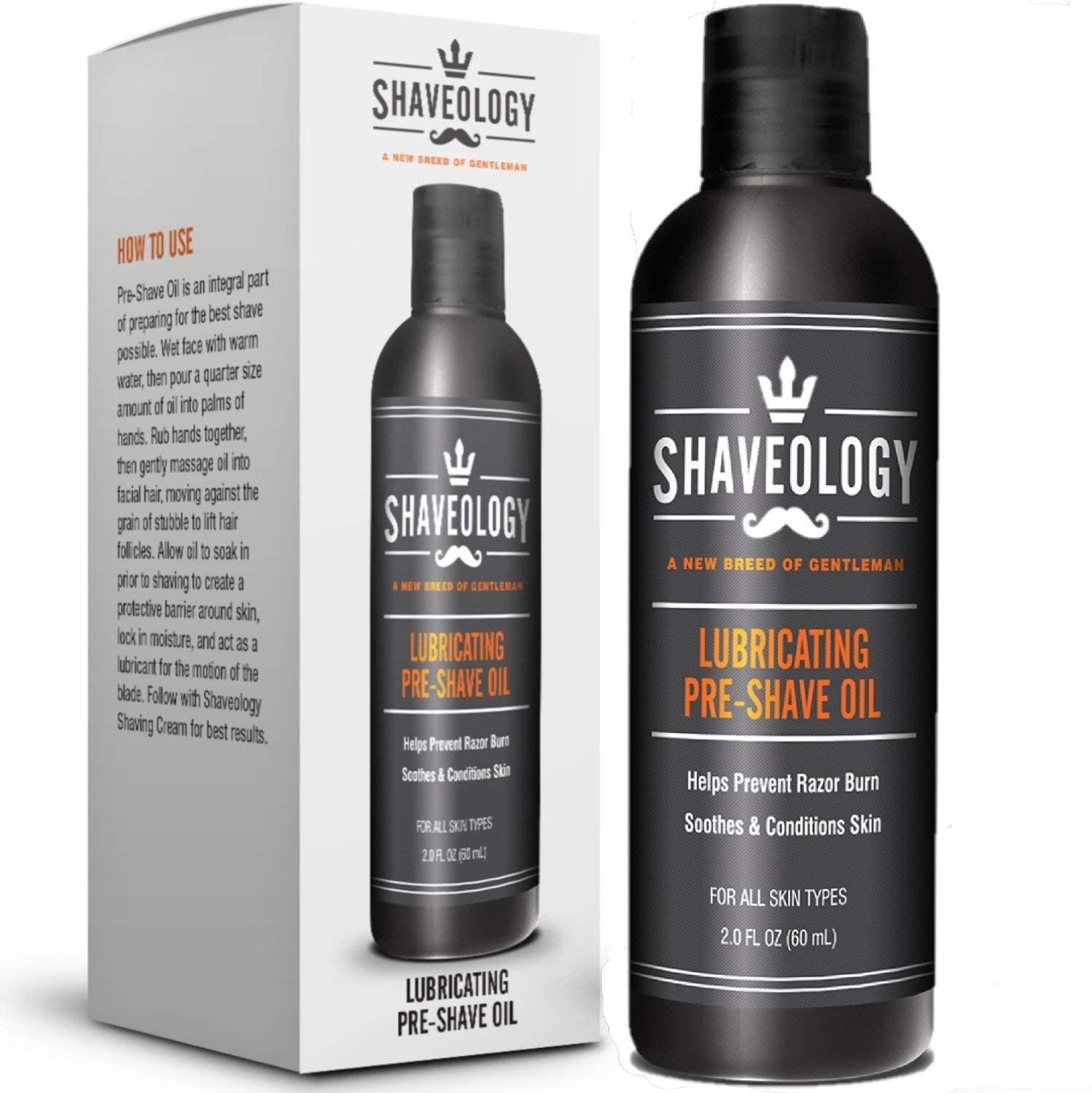 What can we say about The Art of Shaving that you don’t already know or that we haven’t covered for the company’s other products? The brand knows shaving is more art than science, but that doesn’t stop it from producing some of the best shaving products you can buy at prices far more affordable than more established brands. The Art of Shaving Pre-Shave Oil is just another great entry in a line of great products and the best-reviewed pre-shave oil on Amazon, with more than four out of five users giving it five stars.

The brand keeps it simple with this pre-shave oil because you don’t need a million ingredients for increased lubrication and a great scent. It’s just castor seed oil, olive oil, lavender oil and three other ingredients for additional fragrance. The end result is a simple, great-smelling effective pre-shave oil that will reduce razor burn and irritation and give your razor the extra glide it needs for a smooth shave. Honestly, it was a tight race to not award this the best overall pre-shave oil, but ultimately we couldn’t look past the price difference and the lack of any kind of easy-to-use cap. It’s a great pre-shave oil, but it’s hard to ignore the price when there are other great options that cost half as much and that have pump dispensers or eyedroppers. 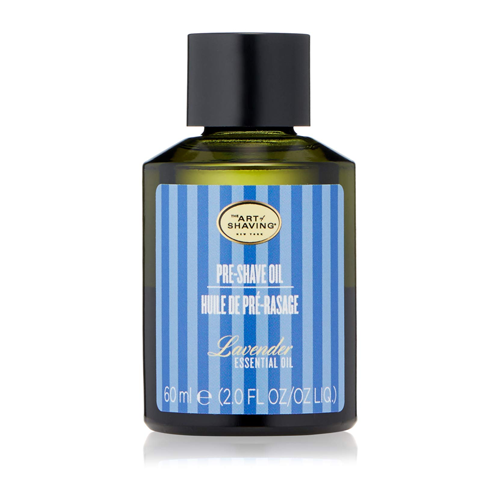 We’re big fans of value at SPY because we frequently want our dollars to go as far as possible. That’s why we always look at things like price per ounce so we can try to find the best bang for your buck. When it comes to pre-shave oils for men, The Henna Guys offer the best value we could find with their Moisturizing Pre-Shave Oil. For about $20 you’re getting eight ounces of pre-shave oil. Normally a bargain like that is a red flag: It must be a terrible oil if it’s such great value, right? Not in the least. This pre-shave oil uses the same ingredients as much pricer pre-shave oils, such as jojoba, grapeseed, avocado and argan oils. Really the only downside is this pre-shave oil is a bit thinner than other options. While it’ll still offer improved glide and comfort, thicker options run less, adhere to your face a bit better and offer a bit more skin protection, but those are marginal differences more than compensated by the excellent value.

We’re also extremely grateful to The Henna Guys for the pump dispenser on this bottle. It’s not a must-have, but pumps are a lot better for controlling quantity than just a traditional screw-on cap opening or even eye-droppers sometimes. And if you’re into scents, we dig this pre-shave oil’s lemon and eucalyptus scent. If you’re not, you can also get this great value with the brand’s unscented pre-shave oil too. And if you like scents, but aren’t keen on lemon and eucalyptus, the same oil comes in a sandalwood scent as well as a lavender & geranium scent. 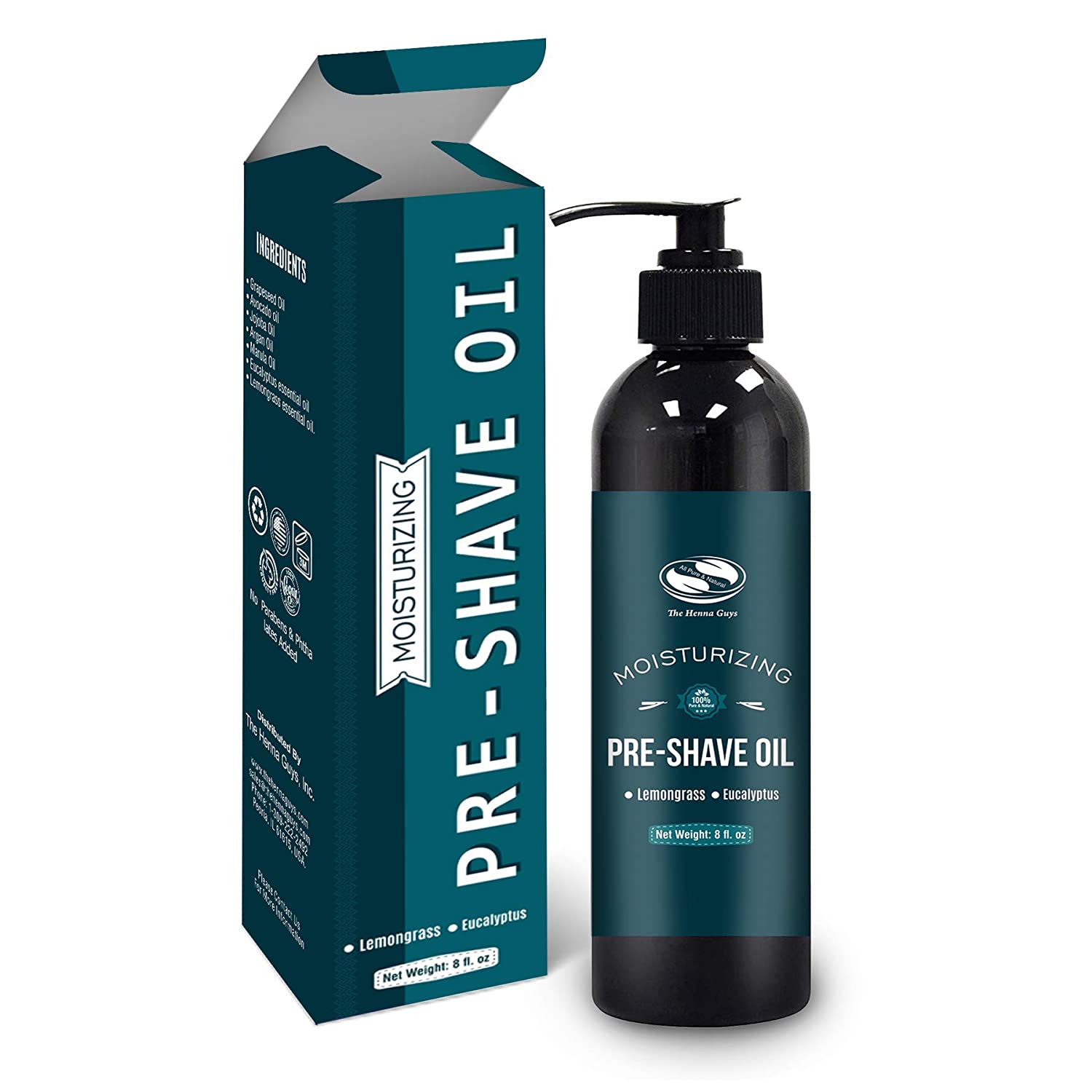 The Henna Guys may have the best value for a pre-shave oil for men, but if you don’t mind that a product wasn’t designed with men in mind, then Tree Hut Bare Moisturizing Shave Oil is the pre-shave oil for you. It costs almost less than half the oil from The Henna Guys and can be used to shave anywhere on your body. But that pro is also a con: It’s not only not designed for men but it’s not designed just for faces either. That being said, it’s got a bunch of the oils you would expect to find in good shave oils, such as grapeseed oil and jojoba oil as well as shea butter, a classic moisturizer.

Relative to other pre-shave oils, this is a high-risk and high-reward option because it might help you shave on the cheap but its ingredients could irritate more sensitive facial skin. For example, one ingredient here, castor oil, is commonly used in skin products, including The Art of Shaving’s pre-shave oil, for its known therapeutic qualities. But it’s also known to cause rashes and itchy skin for some people, which is the opposite of what we want when shaving. But for what it’s worth, male users have used this shave oil to shave their faces without a hitch, so if you’re looking for the best bargain oil and don’t mind a bit of risk and a pomegranate citrus scent, Tree Hut’s Shave Oil is the best value we could find. 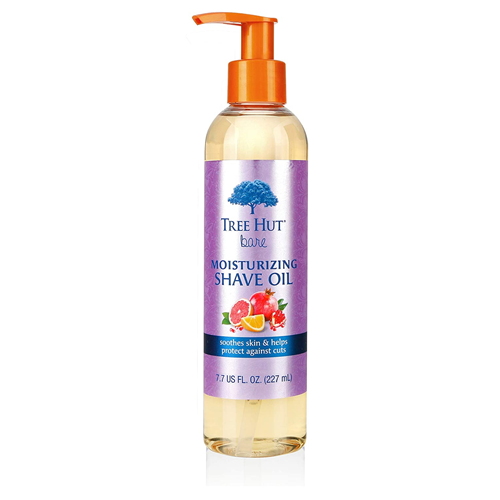 If you’re looking to spend as little as possible, Bulldog’s Original Shave Oil is the cheapest shave oil we could find for a one-ounce bottle. This versatile oil can be used as a pre-shave oil before a cream, a stand-alone shave oil or a post-shave oil. Coconut, sunflower seed and soybean oils work to create a slick shave surface while aloe and green tea leaf extracts working to soothe your skin before the shave. 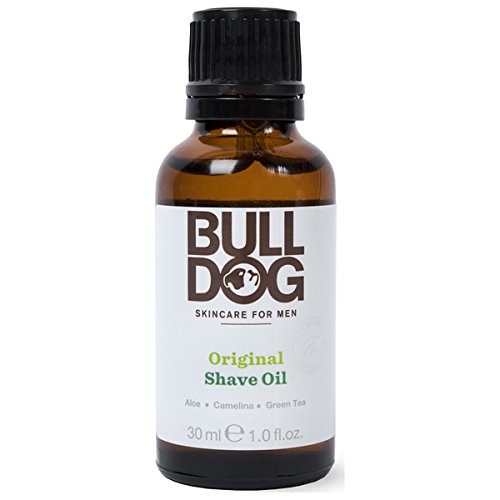 We tend to be big fans of disruptors and new players in the men’s grooming space because they tend to be focused on one thing: high-quality products at a price you can afford. That’s partly because they want to displace the long-established brands. But there’s a reason classic brands remain in the game: Not only do they make high-quality products but they’ve been making them for decades. They know exactly what they are or aren’t doing with their products from the design of their bottles down to the last ingredient. That’s what you can expect with Claus Porto Musgo Real Pre-Shave Oil.

The Portugal-based lifestyle house has been producing beauty and grooming products since 1887 and the experience shows in its pre-shave oil. Eucalyptus, tea tree, spearmint and peppermint oils soothe your skin and help the razor glide while isopropyl myristate works to soften skin. The oil isn’t too thin either, courtesy of caprylic/capric triglyceride, a common thickening agent in cosmetic products. And that’s just the qualities of the pre-shave oil itself. It comes in a bottle guaranteed to class up your bathroom sink and with a masculine fragrance informed by over 100 years of experience. With notes of sandalwood, patchouli, amber and vanilla, you’ll enjoy the woody scent while you shave and you can always throw a bit on as an aftershave if you want to maintain the scent throughout the day. Overall, if you’re looking for a pre-shave oil with a bit of history behind it, Claus Porto’s will bring you back to the Belle Époque. 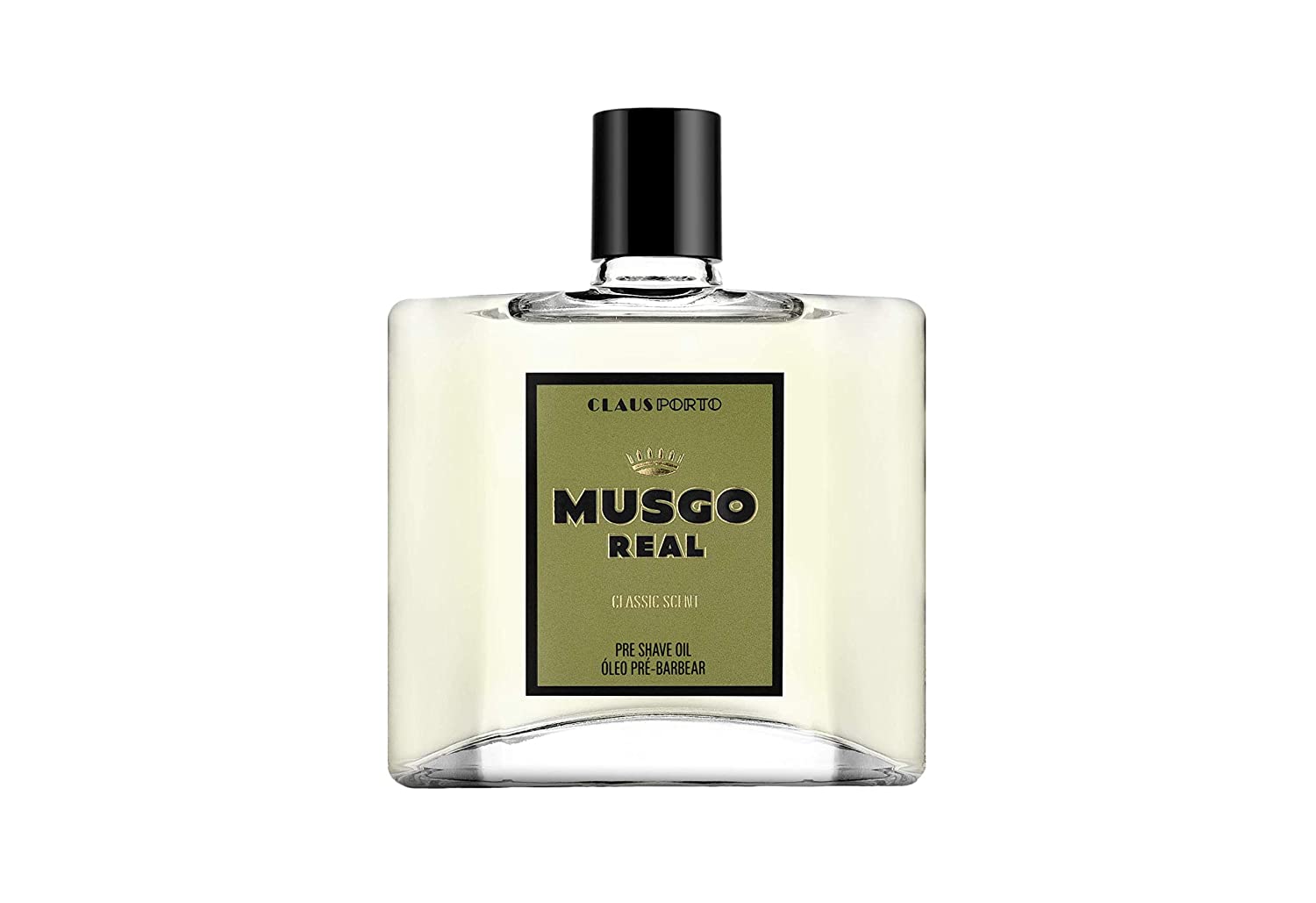 While most pre-shave oils are meant for traditional shaves, we didn’t want to leave out options for those using electric shavers. That’s where Williams Lectric Shave Electric Razor Pre-Shave can help. This water-based and alcohol-based solution will help stand your facial hair up for a closer cut while offering improved gliding for less skin irritation, all with a heck of a lot less clogging than traditional shave oils or shaving creams. For even more help against razor burn, green tea leaf extract works to soothe your skin. That means even though this pre-shave is designed for electric shavers, it’ll still work as a great base for a traditional shave. The only downside is this stuff is quite flammable due to the amount of alcohol, but that’s got to be the most avoidable problem we’ve ever encountered in a grooming product, especially one as useful and cheap as this. 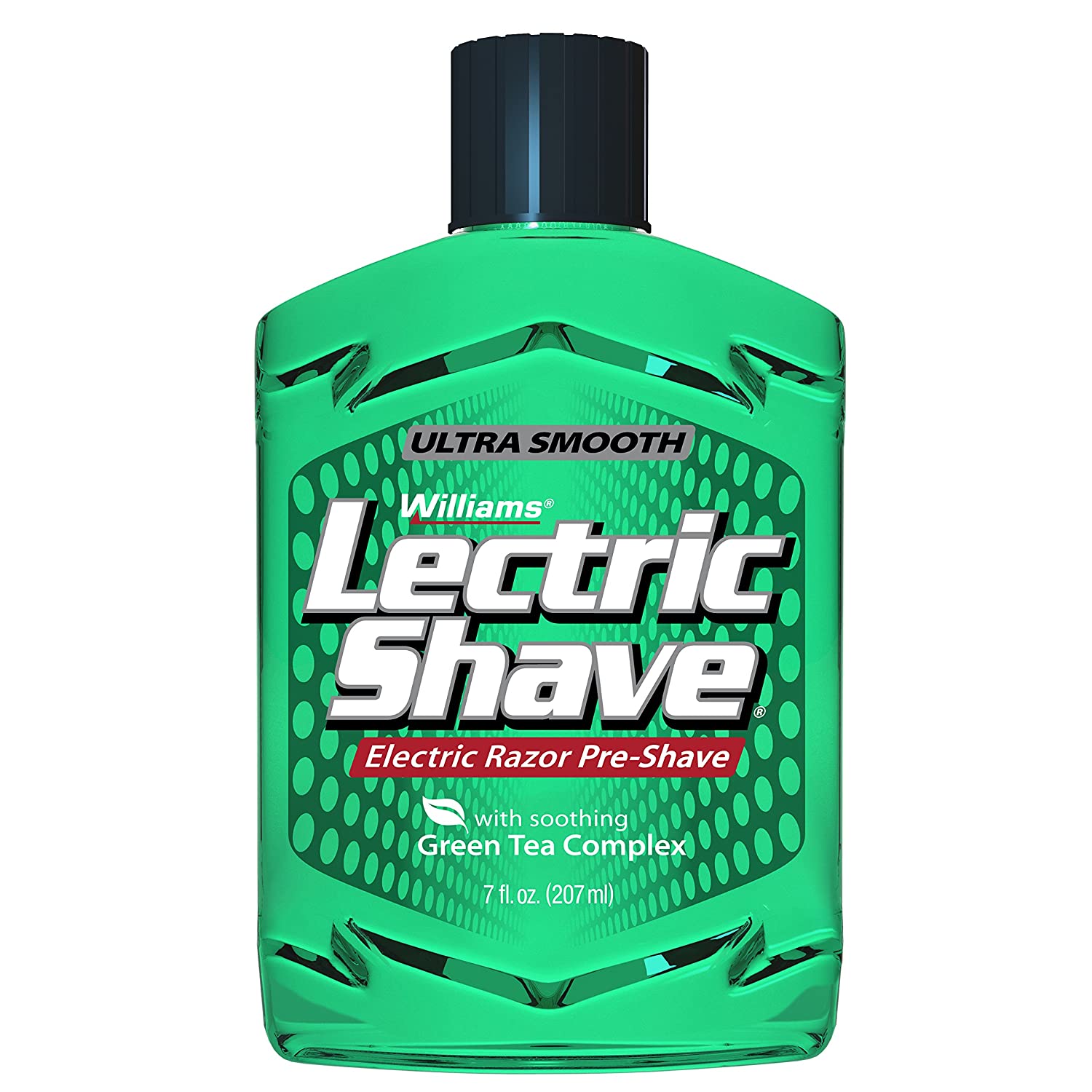 You’re a man on the go with limited packing space, but you don’t want to compromise on a great shave. That’s where travel-sized products come in handy and where King of Shaves Supercooling Shave Oil reigns supreme. This half-ounce bottle will easily fit into any dopp kit so you can get an improved shave wherever you go. It’s formulated with sensitive skin in mind, with aloe and vitamin E working to soothe your skin, menthol for that wonderful cooling sensation and tea tree oil for added glide as well as its outstanding tingly sensation. Ideal for travel, you can use it under any shaving foam or gel or even with an electric shaver, so whatever shaving tool you have on hand on the road, you can use this pre-shave oil for an upgrade shaving experience. 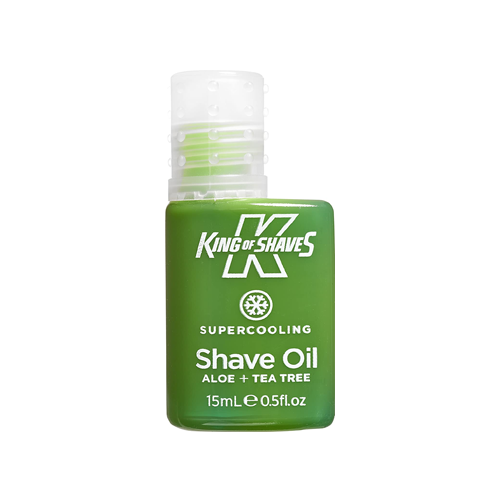 Courtesy of Amazon
Buy: King of Shaves Supercooling Shave Oil $8.00
buy it
Showering Dries Out Your Skin, Lock in The Moisture With the Best Men’s Body Lotion