Few things boost a man’s confidence better than a good aftershave. It’s a great way to put some pep in your step before heading to the office in the morning or leaving for a night out, but it has to be the right post-shave product.

Not all aftershaves are made equal, with many drugstore options (and even some high-end products) offering very little in terms of soothing, cooling and fragrance. A good aftershave should heighten the smoothness of a fresh shave, cool your face off and also provide a subtle, masculine scent. However, a lot of younger men are also looking for alternatives to their dad’s aftershave, from post-shaving stones to skincare masks for men. The best post-shave products can also help protect you from ingrown hairs and razor burn.

If you’re unhappy with your current post-shave products — or you’ve always stuck to the same one — read on. We’ve rounded up some of the best aftershave products below. Most are balms, moisturizers and lotions of some kind. They’re liquid and vary in consistency, but all work to soothe and hydrate your skin to relieve irritation and razor burn. But we also found a few aftershave products you might not have considered but that are just as effective at repairing your skin in that critical moment when you finish shaving. The one thing they all have in common is they’ll leave you feeling smooth, cool and confident after every shave.

This product has everything we’re looking for in the best post-shave products: it soothes irritated skin after a shave, it has cooling spearmint and menthol, it’s from a grooming brand we trust and, even better, it’s affordable. Plus, it’s made here in the United States.

Pacific Shaving Company not only makes a whole line of great shaving products, including shaving creams and razors, but they’re also all made in the United States. That makes it all the more surprising that the company’s caffeinated aftershave cost so little for a bottle with the standard 3.4 fluid ounces. Unlike most competing aftershaves, Pacific Shaving Company uses caffeine as its primary rejuvenating ingredient. In addition to its well-known stay-awake properties, caffeine is also rich in antioxidants and in small doses on your skin works to reduce redness, puffiness and irritation. But that’s not all that’s in this aftershave. Organic oils like olive, argan and spearmint as well as shea butter and plant extracts work to add moisture and hydration to your skin to keep the irritation at bay after a close shave. 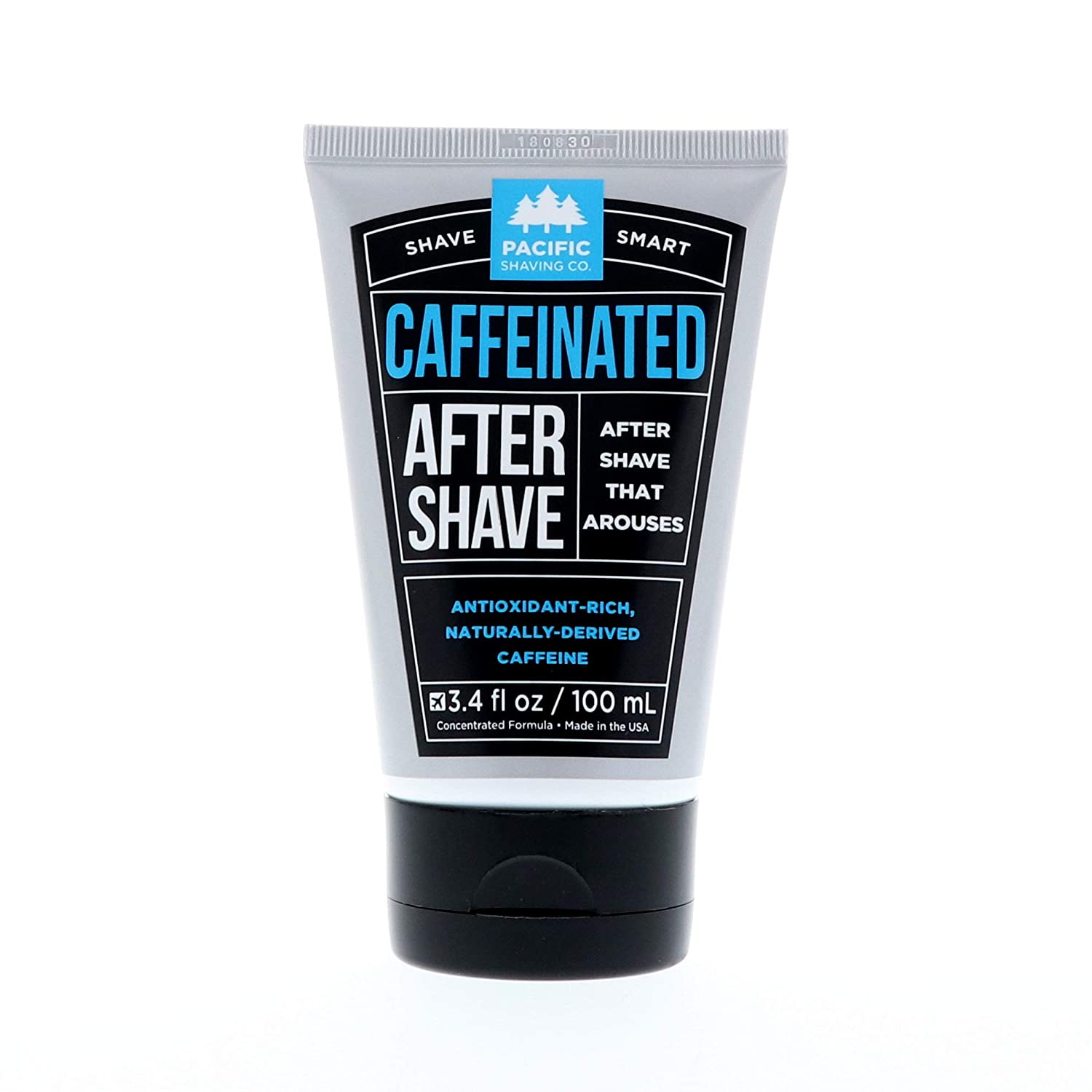 When you want the best aftershave products, you need to go to the best grooming companies. The Art of Shaving’s main focus is creating high-quality products with natural ingredients to help the man who shaves every day. Given shaving products are the company’s expertise, it shouldn’t surprise to see The Art of Shaving Sandalwood Aftershave Balm on this list. To be one of the best, you’ve got to use the best ingredients and you can find everything you’d expect in a great hydrating aftershave in The Art of Shaving’s balm, including shea butter, essential oils, citrus and plant extracts and glycerin-related compounds, which help skin absorb water for added moisture and smoothness.

What you end up with is an alcohol-free solution to address skin irritation with nature’s ingredients designed to do so. And if you’re not sold, we really love the masculine sandalwood scent too. Nothing says “I smell like a man” than the rich woody scent of sandalwood. If you think this balm is right for you, but would prefer a different scent, The Art of Shaving produces this balm with different fragrances, such as lavender, bourbon and bergamot & neroli as well as an unscented version. The only downside for these products is they do cost quite a bit more than competing aftershave products. 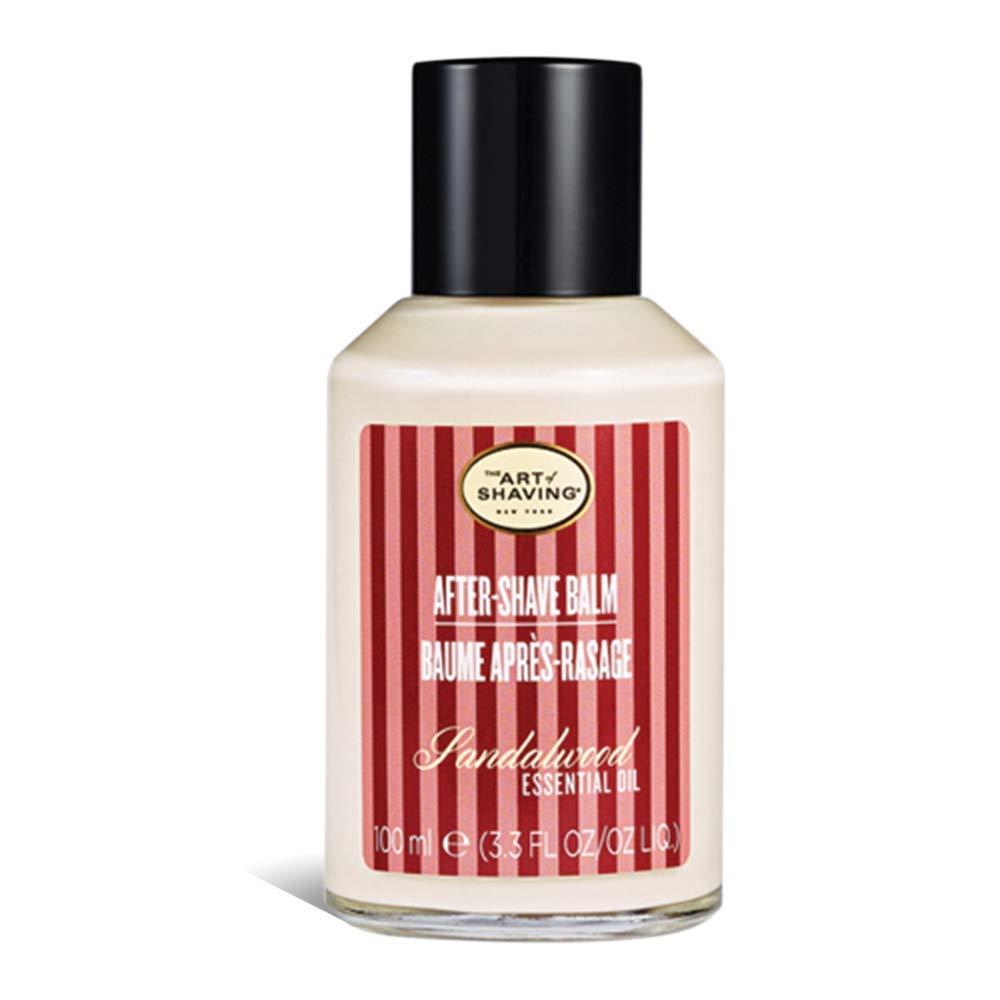 The best aftershave products don’t need to be all about fragrance or this or that ingredient. Sometimes we just want something that works and offers great bang for our buck. Nothing we found offers better value than Imperial Barber Grade Products Bergamot Aftershave. It costs a little bit more upfront than other nominally cheaper aftershaves, but you get 9 ounces of product here, which is almost three times as much aftershave as other competing aftershaves. But this isn’t just a great value.

Made by two professional barbers, it’s got macadamia nut oil to moisturize and protect your skin, chamomile for adding soothing power and witch hazel extract for its antiseptic and refreshing properties in addition to the bergamot essential oil for a bit of fragrance. The only downside is the bergamot scent isn’t very strong. We don’t necessarily want something overpowering, but it’s less than subtle, which isn’t great if you’re looking forward to that great citrus bergamot fragrance. But if you just want the most amount of aftershave for the least amount of money, this is the best aftershave product for that.

For one of the best aftershave products you might not have heard about before, we recommend the Proraso Post-Shave Alum Stone. We know what you’re probably thinking: What the heck is post-shave stone and what the heck is alum? First, it’s not a literal stone. It’s just a block of the chemical compound potassium alum. Potassium alum makes a great aftershave because of three of its chemical properties. It’s a natural antiseptic, which means it’s antibacterial and good for hygiene. It’s also an astringent, which means it shrinks body tissues, as well as a styptic, which means it naturally stops bleeding. Put those three effects together on your face by rubbing it post-shave with an alum block, and because of the natural chemical properties of potassium alum you will naturally reduce redness, tone and smooth your skin and stop the bleeding of any small cuts. Pretty amazing, right?

We know post-shave stones are a little uncommon, but they’re worth trying (especially for just $10). Given the low price of an alum block, it’s a great alternative to traditional post-shave balms and lotions. The one thing an alum block doesn’t do is add moisture, but you can always supplement the use of an alum block with a facial moisturizer. If you want to use this instead of a balm or lotion, rinse your face with cold water first. Rub the stone all over your mug, let it sit for a few seconds and then rinse with lukewarm water as it’s not meant to sit on your face. 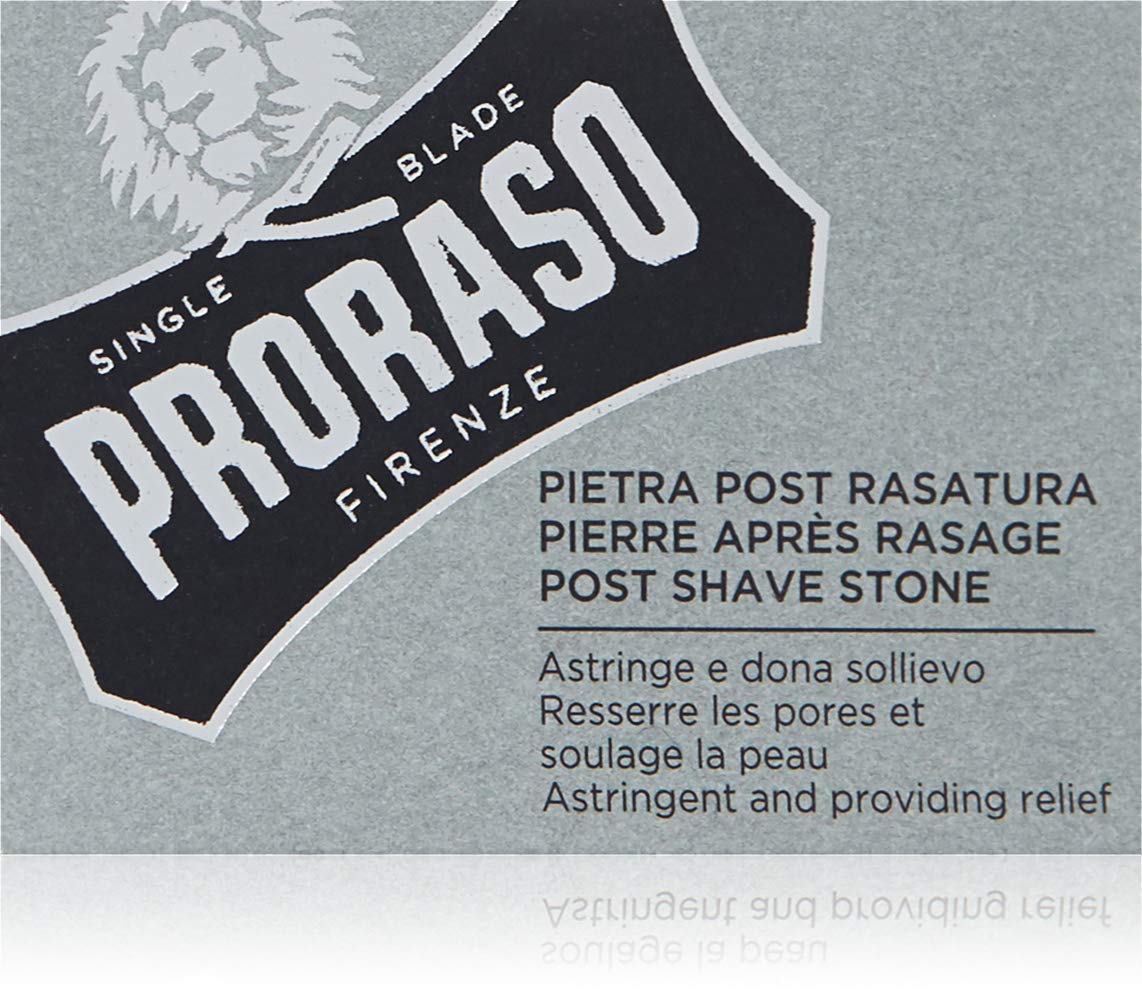 Everything on this list will help with razor burn and skin irritation, but depending on the ingredients you could end up with irritated skin if you have sensitive skin. Proraso Aftershave Balm is one of the best aftershave products we’ve found for sensitive skin. It’s the only aftershave product we’ve found that makes use of oatmeal (avena sativa kernel extract) in its formula. There’s a reason we make kids take oatmeal baths when they have the chicken pox. Oats have natural anti-inflammatory qualities and can help with skin issues like eczema and psoriasis as well as generally dry skin. That makes it the perfect ingredient for those with sensitive skin. Add in some green tea extract for its skin protection properties and some glycerin for improved water absorption and you’ve got one of the best aftershave products for dealing with sensitive skin. 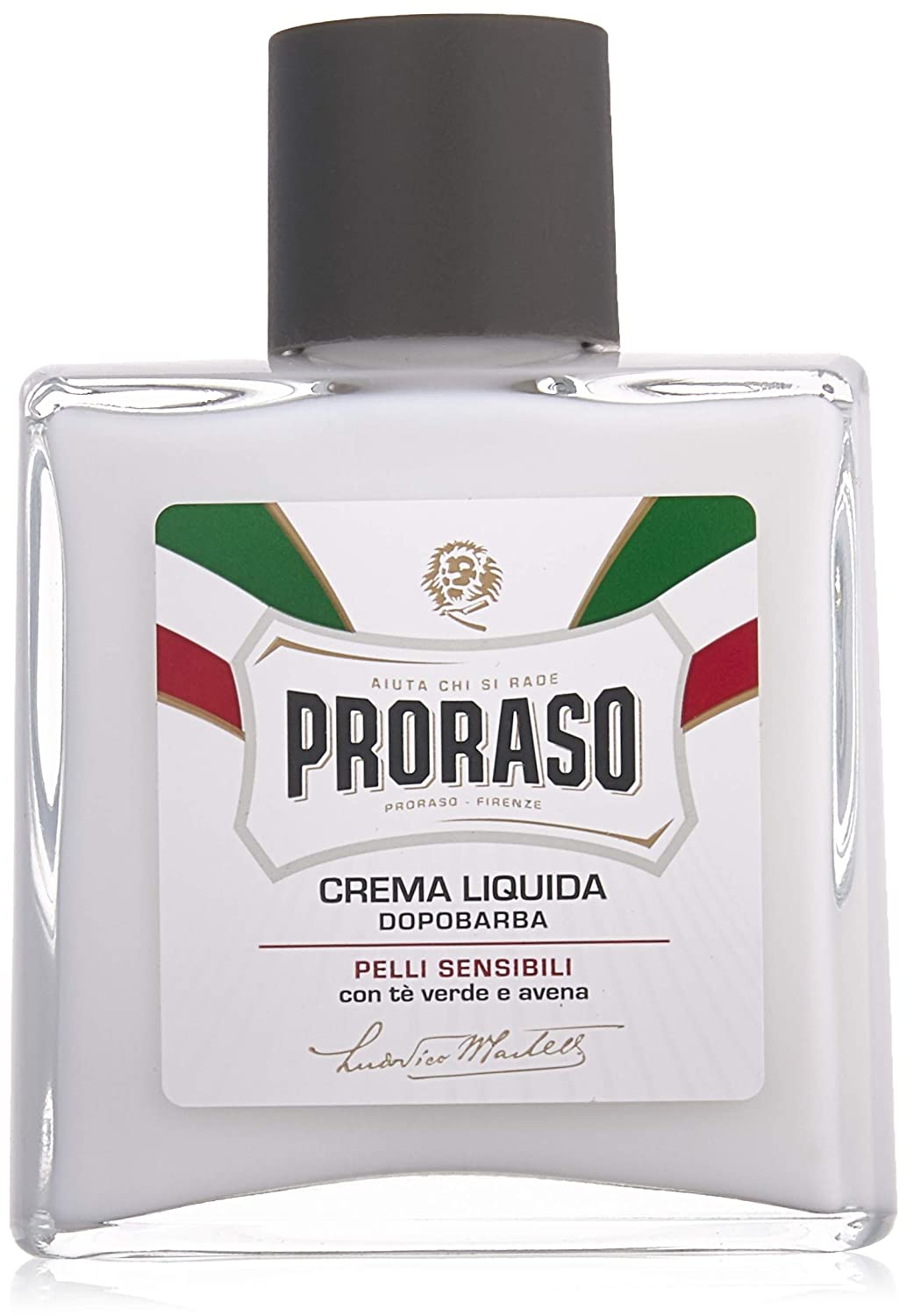 With almost every male grooming product carrying a fragrance these days, it can be super easy for scents to clash when you’re in close proximity to someone. Not only that, added fragrances can also add to irritation for some people’s sensitive skin. That’s where a great unscented aftershave balm like Lather & Wood Shaving Co’s Unscented Aftershave Balm can help. It’s non-drying so it won’t sting when applied and key ingredients like aloe, coconut oil, vitamin E and more work to stop razor burn in its tracks and hydrate and soothe your skin. The non-greasy formula absorbs into your skin for maximum moisturization so your skin will maintain its smoothness for the rest of the day. Given the ingredients, the lack of added fragrance and this balm’s non-drying qualities, it’s a great option for sensitive skin and just an all-around great aftershave product.

This Jack Black Post Shave Cooling Gel is slightly more expensive than a typical drugstore aftershave, but it’s worlds better. It utilizes botanicals, including sage, lavender, aloe and chamomile, to heal skin, fight bacteria, and moisturize after a shave, preventing dryness and flakes. You’ll have less redness from razor burn and irritated skin and this cooling gel can even help with sunburn thanks to the aloe. 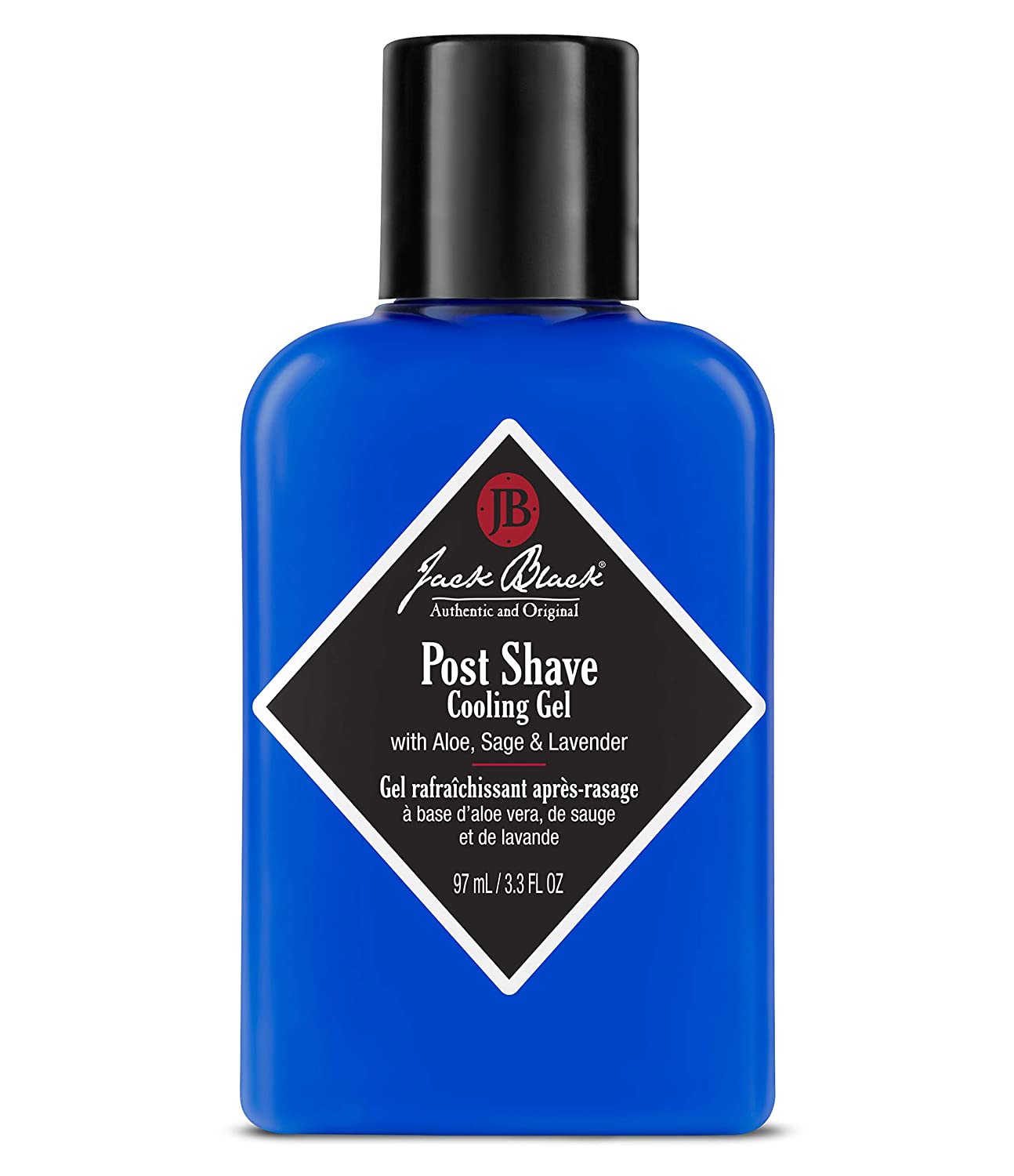 We tend to trust Proraso because we’ve used so many of their shaving products and because of the company’s long-standing place at the top of the shaving industry in Italy, but if you’re just looking for a great but cheaper alum block, the Gentleman Jon Alum Block is a great alternative. It’s a slightly smaller block of alum than Proraso’s block, but it’s the same potassium alum so it will literally do the exact same things. It also comes in a plastic case for increased portability, which always helps. 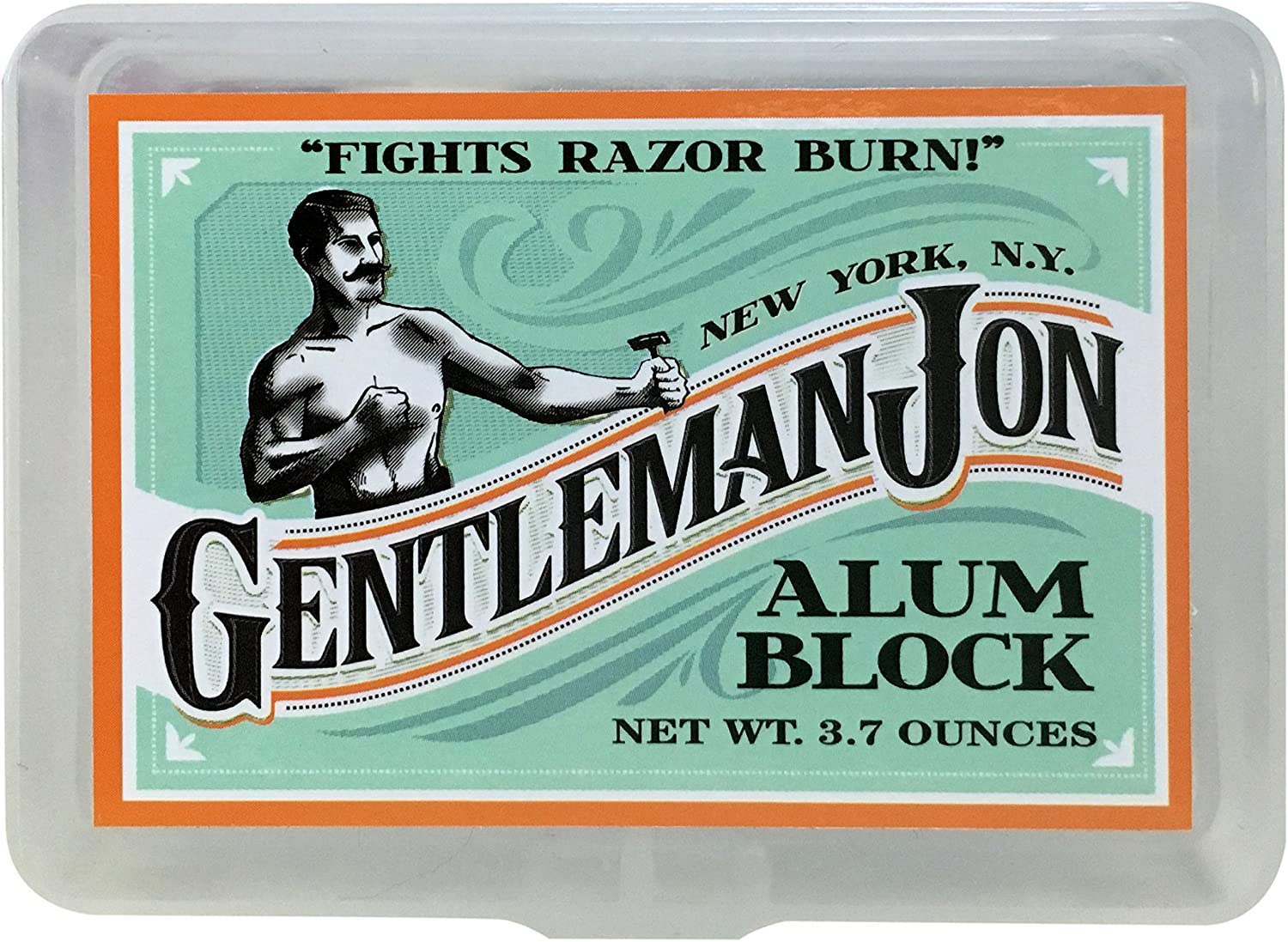 Serums generally are concentrated versions of ingredients for a specific purpose. In marketing, they’ve come to be associated with anti-aging and skin treatment products. That’s more or less what you’re getting with Scapicchio Anti-Aging Aftershave Serum. Similar to other serums, it has the consistency of a thin, light lotion but instead of being designed just for anti-aging or dark spot treatment, it’s designed to work as an aftershave balm too. Hyalauronic acid, a molecule naturally produced by the body for skin, drives the anti-aging process and reduction of fine lines and wrinkles by helping with tissue regeneration. At the same time, familiar ingredients like tea tree oil, glycerin, shea butter and olive oil help condition, soothe and hydrate your skin from the razor burn and skin irritation, leaving your skin soft and smooth and ready for the day. 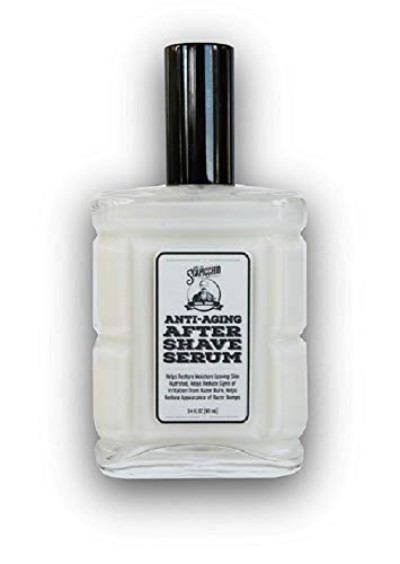 If you’re looking for an old-school, masculine fragrance in your aftershave balm, Aramis Advanced Moisturizing Aftershave Balm is for you. Aramis is not actually a company that makes things. (All Aramis-branded products are produced by Estée Lauder.) Aramis is actually just the name of the fragrance, and it’s so popular and smells so great — it’s one of the highest-rated aftershaves for scent on Amazon — that anything with the Aramis name just means it has the signature Aramis fragrance. The fragrance, first produced in 1963, smells leathery with jasmine, amber, sandalwood, clove and moss. So yeah, it’s the scent of a refined, sophisticated man, like the Aramis of The Three Musketeers for which it is named. And, of course, it wouldn’t be one of the best aftershave products if it didn’t have some plant-based oils and extracts to soothe and hydrate your skin. 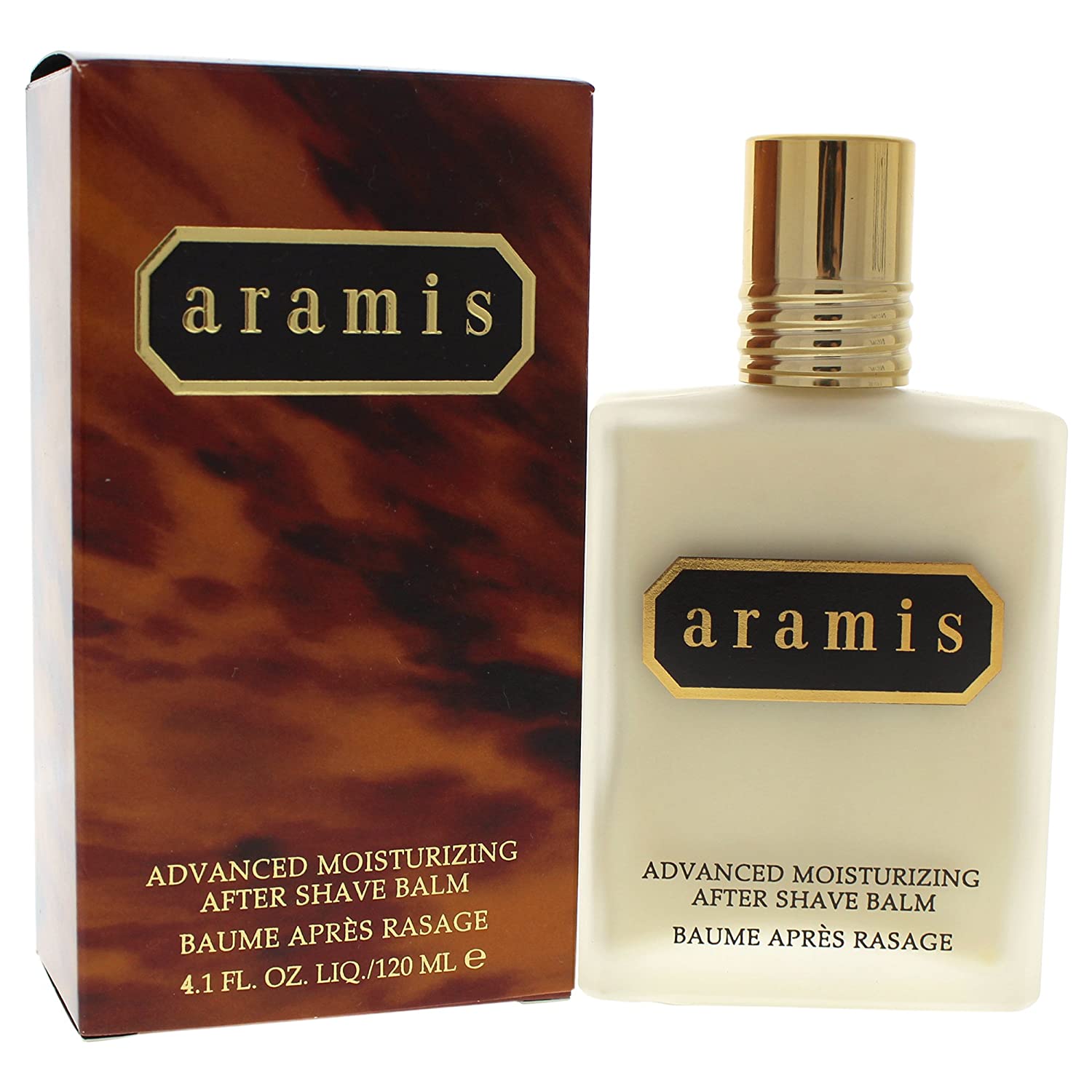 A good mask can work wonders for the skin, but it’s hard to find any that are made for guys’ skin like this one from Barber Pro. It’s infused with collagen, the naturally-occurring protein responsible for keeping skin youthful, which firms, cools and soothes the face. 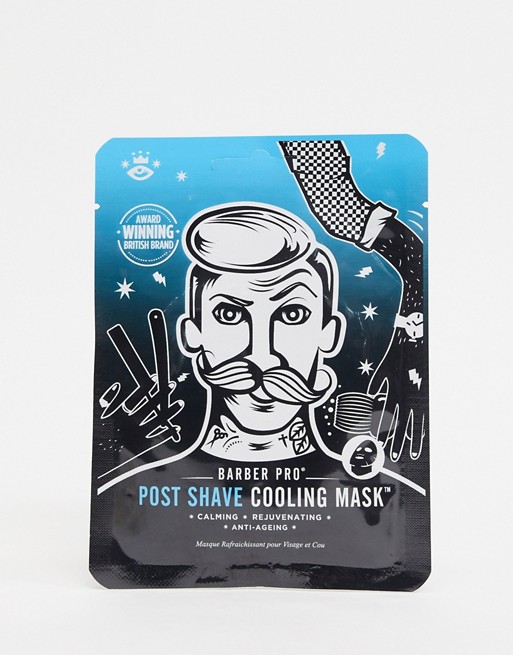