* Charcoal toothbrush for more effective brushing
* Get a 5-pack of durable, handsome brushes
* Remove up to 99% of plaque and breaks up biofilms

If you’re not familiar with the concept, a charcoal toothbrush can seem somewhat counter-intuitive. After all, no one wants to brush their teeth with a burned piece of wood. That would be a terrible idea. But charcoal is not just for barbecues, rustic stoves and the aftermath of dragon attacks. It’s used in products like filters and filtration systems, and it even has its uses when it comes to medical detoxing. The reason for this is that charcoal, despite its reputation as a pollutant, is actually really good at cleaning things, especially in its “activated” form. Activated charcoal has a very large surface area, and this makes it exceptionally good at cleaning rough and difficult to reach areas. It makes for an amazing toothbrush material too, as this ultra-cheap 5-pack with its over 3000 five-star reviews suggests. 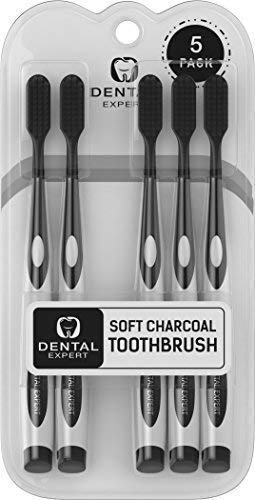 The charcoal toothbrush by Dental Experts is said to boost overall oral health, reducing plaque by up to 99 percent and delivering whitening results that rival those of expensive chemical whitening strips. And unlike harsher forms of mouthwash and aggressive flossing, the charcoal toothbrush is gentle enough on gums that it doesn’t lead to inflammation or cause excess bleeding even if you have sensitive gums.

These handsome black and white toothbrushes also look great, and with this five-pack, you get enough toothbrushes for up to 15 months of use. After all, even if that charcoal cleanse thing was mostly a fad, and probably not a great idea, there’s a reason people thought of it, and charcoal actually works great at cleaning and whitening teeth.

The Best Ways To Hack Your Oral Care