Of course, convenience is number one. Disposable razors don’t need to be cleaned or brushed out after each use. They’re great for traveling because they can simply be tossed in the garbage after a number of uses as opposed to electric razors that need to be charged. Disposable razors are also much lighter than their electric counterparts, making them ideal for travel.

The convenience of disposable razors extends to home use as well. One box of razors can last months, making them an item that’s easy to buy and forget about until it’s time to reorder. They work well with just about any shaving cream and can be used in the shower to cut down on grooming time.

Then there’s the price. Disposable razors have a low entry price point, which makes it affordable to purchase and compare inexpensive options to high end razors. The low cost also makes it easy to keep disposable razors in multiple areas instead of carrying the same razor around. Need to shave at work? No problem. Want to shave at the gym? Keep a razor in your gym bag. Have a few bathrooms in your home that you use? Each gets a razor. Do you often visit a friend or family member’s home? Keep a razor at every location to cut down on things to remember for your overnight bag.

If you are a lover of the electric razor, that doesn’t mean you can’t also add a disposable razor to your toiletry bag as a great alternate when traveling or to clean up any areas your electric razor may have missed.

When it comes to selecting a disposable razor, the range of options is wide, with the economical no-frills razor all the way to the ‘I can’t believe it’s not an electric razor’-razor. Not sure which disposable razor is right for you? We’ve got options.

The Men’s Gillette Custom Plus Disposable Razor with Powder Lubrastrip is one of the best all-around disposable razors. It doesn’t break the bank, but it will still deliver a great shave thanks to the Chromium coating on its blades. It’s not the least expensive option, but that means it includes some bells and whistles, like an Ultragrip Lubrastip that is activated with water and helps to avoid the dreading ‘ripping of the skin’ that happens with inexpensive razors. Gillette also comes with a pivoting head that acts like a much more expensive razor. Customers like that the razors are long lasting, inexpensive and get the job done with minimal cuts. 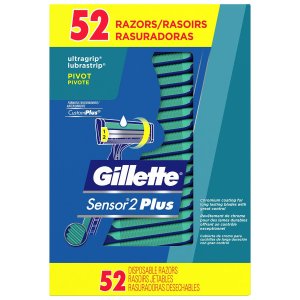 Buy: Men's Gillette Custom Plus Disposable Razor with… $39.99
buy it

The Schick Hydro 5 Disposable Razors For Men With Flip Beard Trimmer is a disposable razor that acts like an electric razor. More expensive that most of its competitors, Schick backs up its price tag with a long list of benefits. The five-blade razor has a skin guard that will protect against cuts and scratches and will cut down on irritation that leads to razor burn. The gel reservoir lasts twice as long as typical lubrication strips, making the razor last twice as long (good for your wallet). For those who are rocking a beard, Schick comes with a beard trimmer that is easily accessed by pressing down on the razor’s handle with your thumb. Schick has a huge following thanks to its many features and the razor’s extended shelf life after its first use. 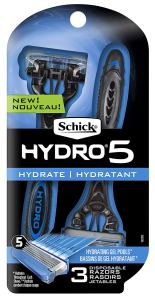 If your razor purchases are based solely on economics, we suggest the McKesson Twin Blade Disposable Razor. The razor is one of the least expensive options on the market and offers a double blade, non-sterile razor that is good for one use. These may not be the best razors for every day home use, but if you’re looking for something to throw in your gym bag or take on an overnight trip, this could be a great option. 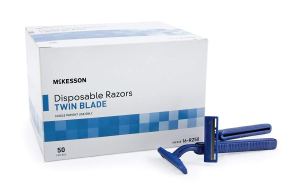 Our biggest issue with disposable razors is their impact on the environment. That’s why we were excited to see Biodegradable Wheat Straw Handle Razors come on the market. The product is still relatively new, but it’s made with the same three-blade system of most disposable stainless steel razors and has a lubrication strip that includes chamomile, Olive Oil and aloe vera to soothe the skin, with the added benefit of a wheat straw handle that is biodegradable. 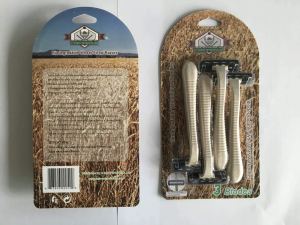