If you want to avoid bad breath and keep your gums in good shape, then a good mouthwash can be an indispensable tool. However, for those with an enamel deficiency or sensitive teeth, we actually recommend sticking to the best fluoride mouthwash.

Fluoride is essential to healthy teeth because of the role it plays in restoring enamel and strengthening teeth. But to help us really understand the use cases and benefits of fluoride mouthwash, we reached out to Dr. Matt Nejad, a biomimetic and esthetic dentist in Beverly Hills, California. He explained how fluoride works to protect teeth, the differences between fluoride mouthwashes and more common antiseptic mouthwashes, and when it’s time to consider adding more fluoride to your dental routine.

Keep scrolling to see our top picks for the best fluoride mouthwash, and to understand what makes this special ingredient ideal for people with sensitive teeth. Because many of our favorite mouthwashes with fluoride are also alcohol-free, this can be a great option for people who hate that burning sensation and prefer gentler mouthwash formulas.

How Does Fluoride Mouthwash Work?

Fluoride, typically in the form of sodium fluoride or stannous fluoride, plays a key role in cavity prevention. Tooth decay and cavities come about as acids, whether from food or as the byproduct of plaque-hungry bacteria, dissolve the tooth’s surface, Nejad explained. “If your tooth couldn’t dissolve, we wouldn’t have cavities,” he said.

That’s where fluoride comes in. Though it doesn’t create new enamel, it effectively lowers your mouth’s pH and makes teeth more resistant to dissolving. That’s why toothpastes all have fluoride, it’s why tap water has fluoride and it’s what makes a fluoride mouthwash so useful. “It coats all surfaces really well and if you don’t immediately rinse out, it gives a benefit,” Nejad said. For maximum benefit, don’t rinse with water to let the fluoride work its way into the tooth.

What’s the Difference Between Flouride Mouthwash and Regular Mouthwash?

The short answer is that most antiseptic mouthwashes don’t have fluoride. “Antiseptic is more about fresh breath and killing bacteria,” Nejad said. “It’s not protecting against cavities significantly.” Those are desirable features, of course, but they’re not actually doing anything to improve the health of your teeth, at least, not in the same way fluoride does.

Everybody’s mouth is different and everyone’s dental habits are different, so it’s impossible to say for sure whether anybody needs a fluoride mouth rinse. But, assuming generally good habits, including daily brushing and flossing, most people won’t need the added support of the best fluoride mouthwash. “If you have excellent dental hygiene and if you’re not leaving food around for bacteria to thrive, you can get away without it,” Nejad said.

But if you don’t use toothpaste with fluoride or have less-than-stellar dental habits or are just prone to developing cavities, it’s definitely a useful addition. “If the average population will have good protection from toothpaste, you don’t need to overdo it [with fluoride mouthwash],” Nejad said. “[But] some people need max protection.”

Because of fluoride’s role in making teeth more resistant to acids, a fluoride mouthwash can also help people with sensitive teeth. Since sensitivity comes from the demineralization and dissolving of the tooth, anything that addresses that can help with sensitivity. “It’s not just the people with sensitivity,” Nejad said. “Everybody who uses [fluoride products] will have a lower chance of cavities.”

Fluoride mouth rinses are an especially good way to keep up dental health for kids, who may not brush adequately. (Just be certain they’re not swallowing the fluoride mouthwash, Nejad noted.)

In short, if you’re already using a fluoride product, like toothpaste, regularly and aren’t dealing with issues, then you likely don’t need a fluoride mouthwash.

For the best fluoride mouthwash, go for the Listerine Total Care Alcohol-Free Anticavity Fluoride Mouthwash. It promises to deliver the fresh breath and bacteria death you desire while also leaving some fluoride behind to help mineralize your teeth and resist acids. I have poor tooth enamel, which can lead to sensitivity sometimes, and this mouthwash has been wonderful alongside my toothpaste for sensitive teeth. If I still feel a little sensitive after brushing, a single swish of this makes my teeth and gums feel a lot better.

Plus, it doesn’t have any alcohol, which Nejad said can dry out your mouth in the long run. 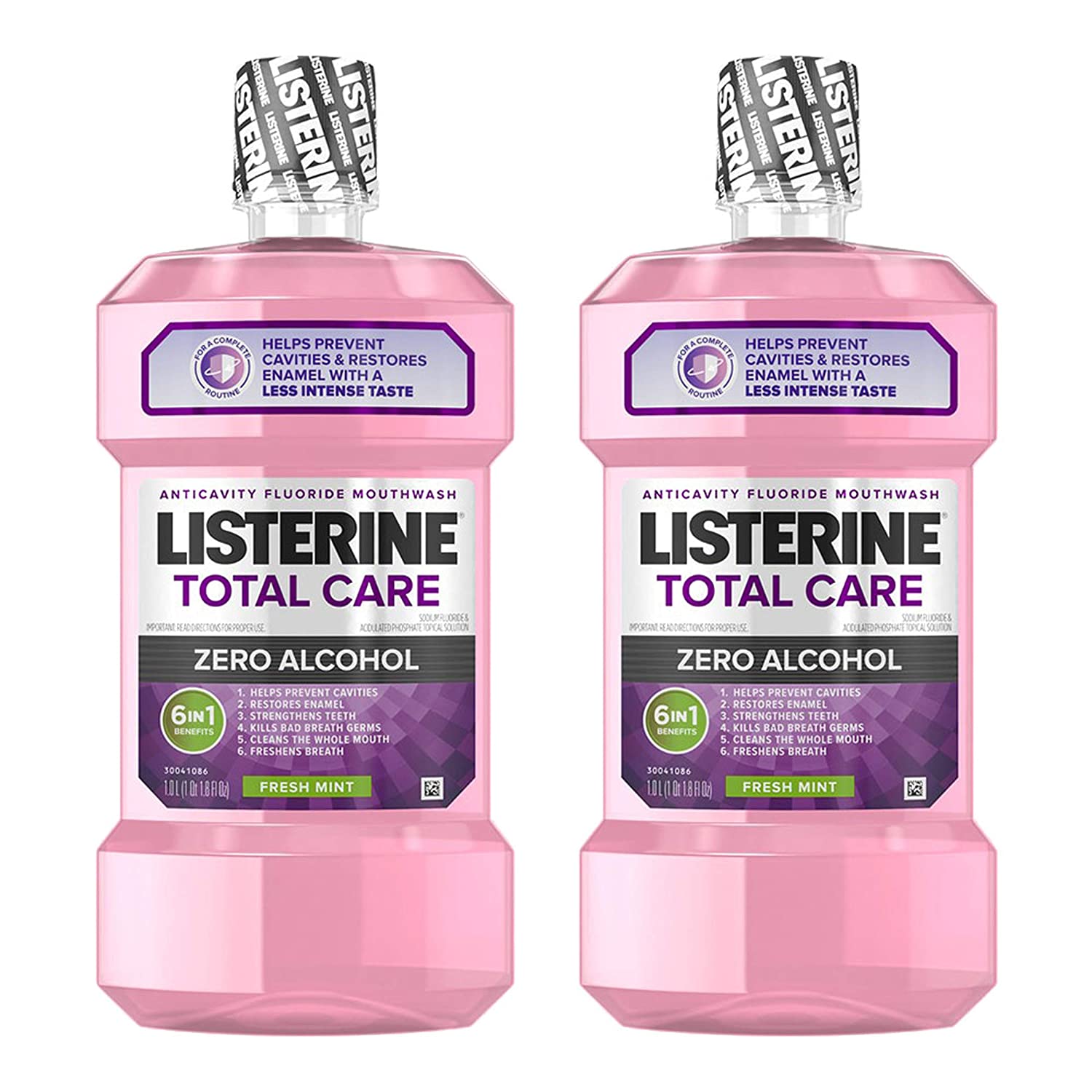 ACT has been making dental hygiene products forever, so it shouldn’t be a surprise that Nejad pointed us toward ACT’s mouthwashes. “ACT is the one I normally recommend because there have been the most studies on it and it’s been around the longest.” In other words, ACT’s mouthwashes have proven to be safe and effective.

The ACT Zero Alcohol Anticavity Fluoride Mouthwash is simply the brand’s fluoridated formula. It’s a great alternative to the top pick and it’s also the best fluoride mouthwash for those on a budget, costing around $0.25 per fluid ounce. It doesn’t hurt either that this mouthwash is on the slightly stronger side, with 0.05% sodium fluoride. 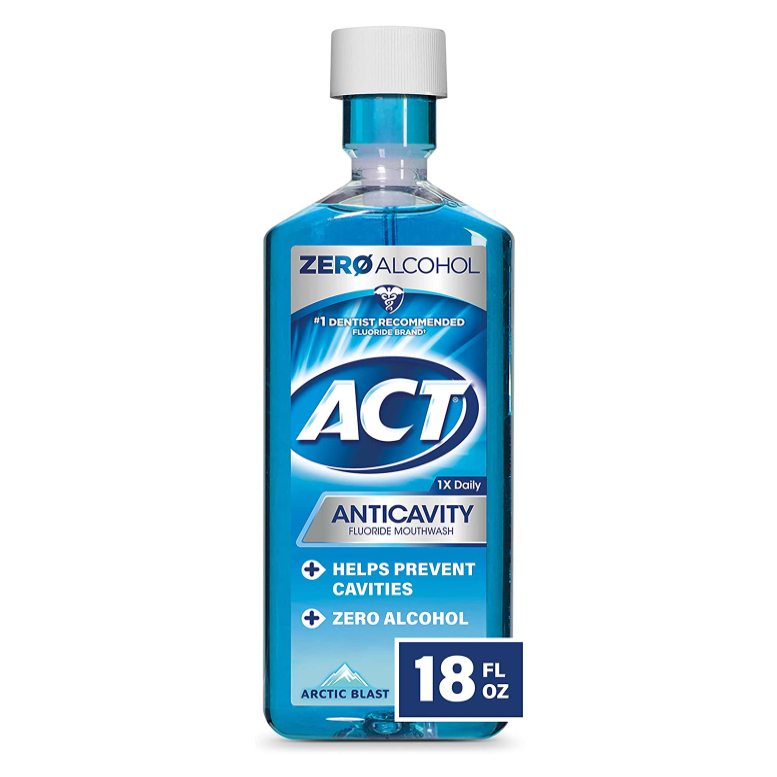 If you’re brand loyal to Colgate, the Colgate Enamel Strength Anticavity Fluoride Mouthwash won’t let you down. Sodium fluoride and calcium work to mineralize teeth, restore enamel and prevent cavities in the process. Overall, this fluoride mouth rinse has everything you need to strengthen your teeth, freshen your breath and it’s a pretty solid value too. 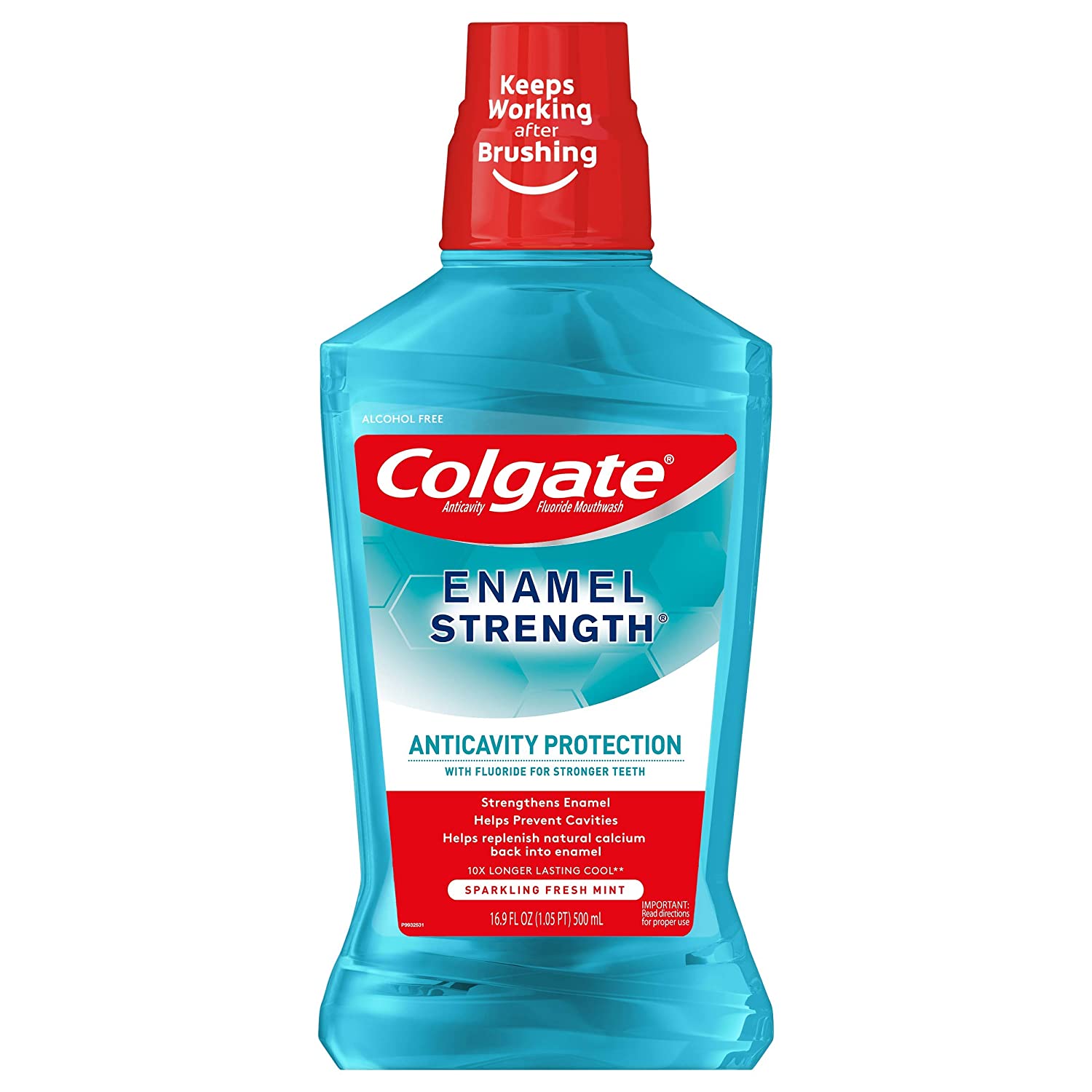 Nejad also flagged TheraBreath’s line of mouthwashes, noting it has multiple formulas, all well-reviewed, including one with fluoride. The TheraBreath Healthy Smile Anticavity Oral Rinse promises to help strengthen teeth against decay and fight cavities while attacking bacteria to freshen your breath. It’s highly rated on Amazon, with over 80% of users giving it five stars on over 3,600 ratings. 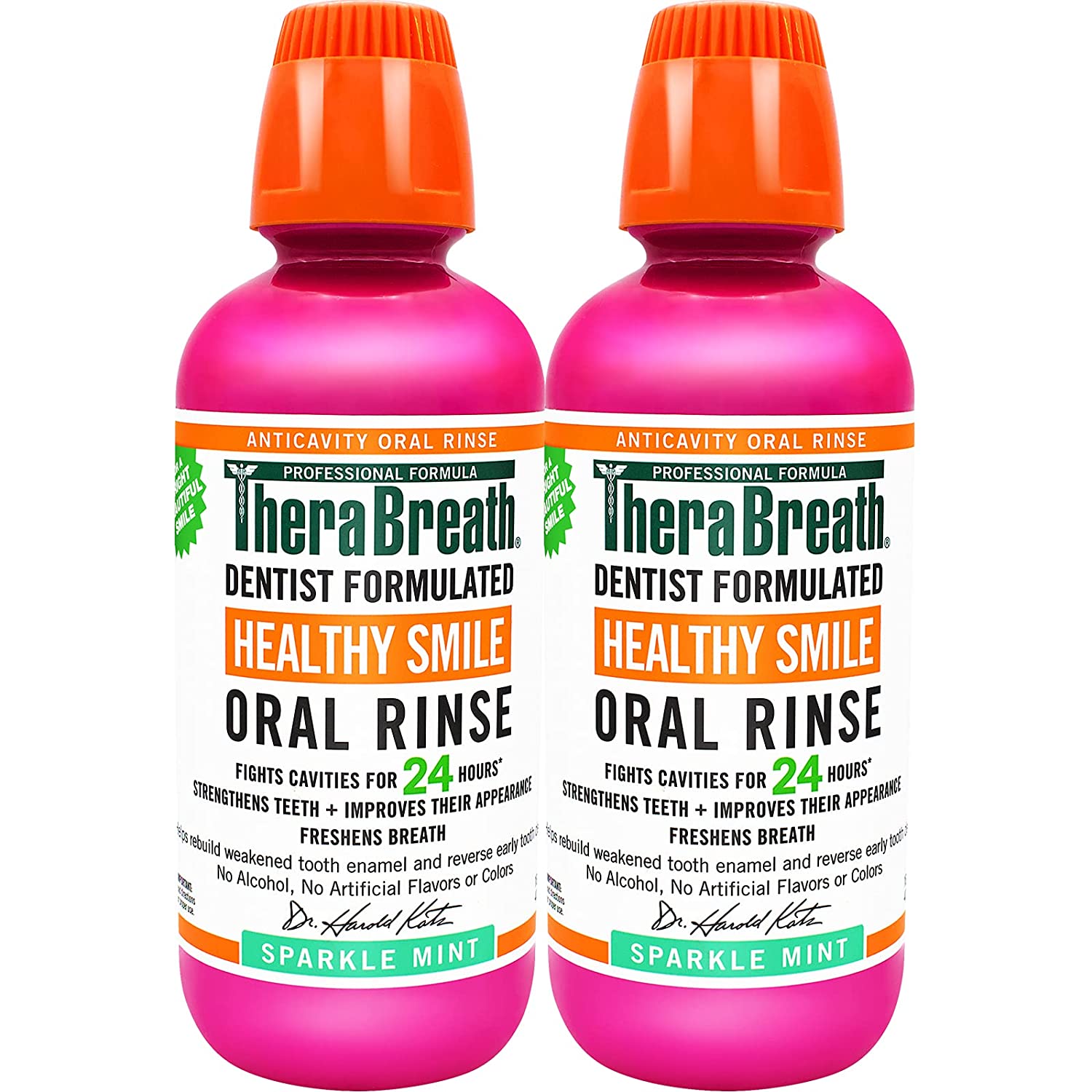 Though the health of your teeth is ultimately what matters, what’s the point of having healthy teeth if they don’t look sufficiently white? Thankfully, the Crest Pro-Health Advanced Anticavity Extra Whitening Fluoride Rinse has you covered. In addition to sodium fluoride, this fluoride mouth rinse adds hydrogen peroxide into the mix for added whitening power. It’s also alcohol-free and offers the best value on price we saw, costing under $7.00 for 32 fluid ounces of the best whitening fluoride mouthwash out there. 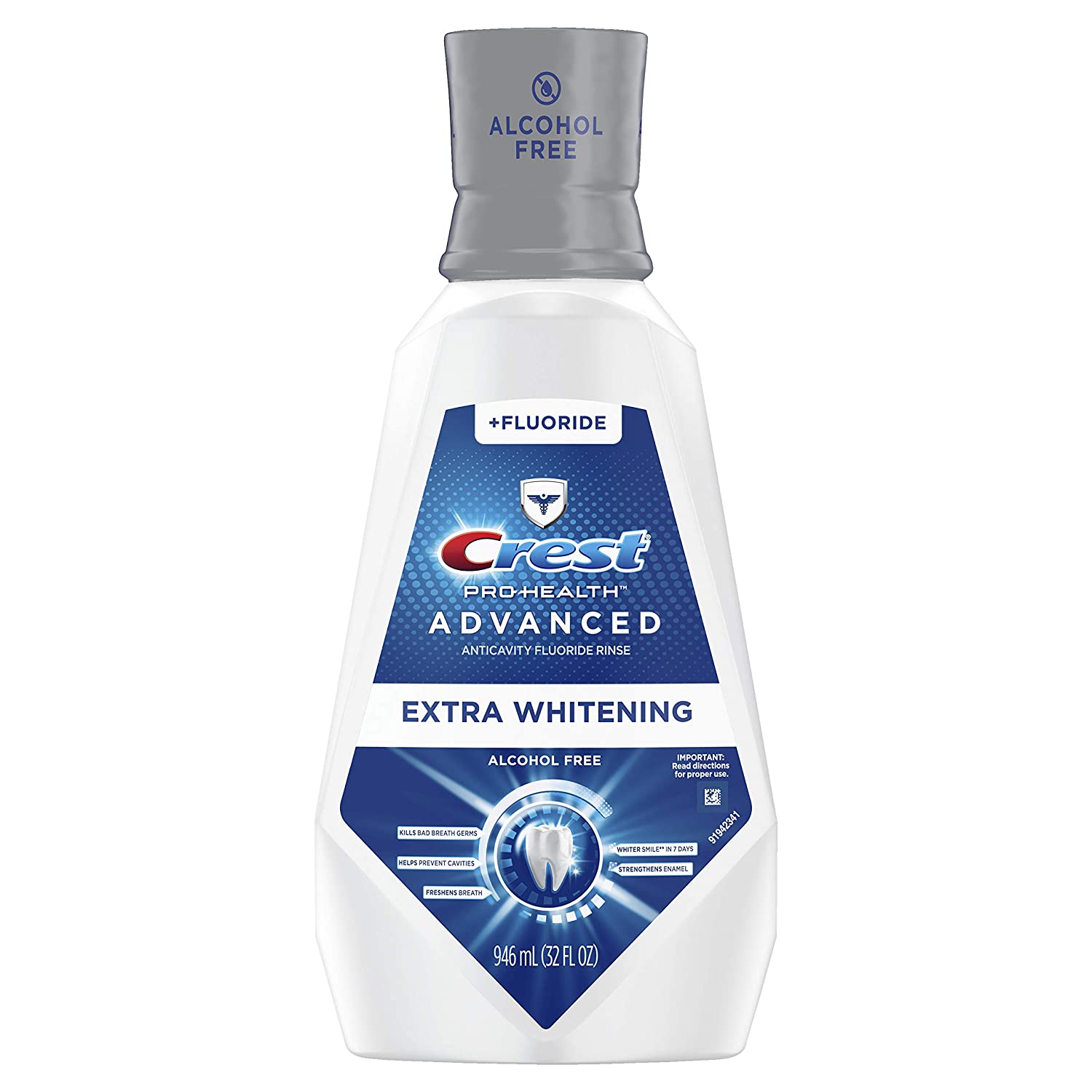 Are there any risks to using fluoride mouthwash?

Technically yes, but in practice, no. We know that many chemophobes are skeptical of fluoride, but we generally think of this as more of a conspiracy theory. In high quantities, fluoride is a known toxic compound, but unless you’re drinking the fluoride mouthwash, there’s no way to get close to the toxic dose (and even then, you’d likely need to chug a few bottles of fluoride mouthwash.) Though people have died from fluoride poisoning, there are no known cases where the source was a fluoride mouthwash. And remember, if fluoride wasn’t safe in certain amounts, it wouldn’t be in tap water.

If anything, there are more risks to not using a fluoride toothpaste or mouthwash, and Nejad said he has patients who avoid fluoride who tend to be repeat customers with recurring cavities.

How Should I Use Fluoride Mouthwash for the Best Results?

After investing in a new mouthwash, keep these directions in mind:

That’s everything you need to know about fluoride mouthwash to justify bringing it (or not bring it, for that matter) into your routine. If you know your teeth could use the extra fluoride support when you’re finished brushing, grab one of the best fluoride mouthwashes below. With just a couple of uses a day, you can start to make your teeth more resistant to erosion and make your brushing more comfortable.