The luxe men’s grooming brand has prided itself on design-led skincare products, to differentiate itself from the likes of Harry’s and Dollar Shave Club. Rather than focusing on sourcing cheap blades that compete alongside higher priced ones, Bolin Webb opted to design better looking handles, which are compatible with Gillette’s Mach3 blades. Not only that, the handles are claimed to be better balanced too. 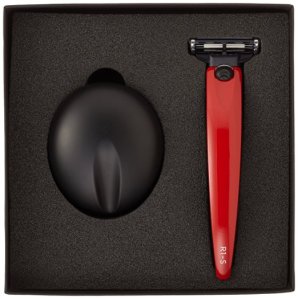 The R1-S Monza Red gets its name from the legendary Italian Autodromo Nazionale Monza, which, with the exception of 1980, has hosted the Formula One Italian Grand Prix since 1950. On the flip side of the curved red handle is a rubberized grip that’s easy to grab and control. Coupled with the razor is the “gravity” stand that displays said razor when not in use and gives it that floating look. Its rubberized bottom ensures that it — and your R1-S Razor — aren’t going anywhere.

Whether you’re in the market for yourself or a loved one, the R1-S Monza Red Razor and Gravity Stand from Bolin Webb are the perfect alternative to the socks, ties and whatever humdrum gift ideas we always seem to have a hard time tackling. The combination of thoughtful design and compatibility with one of the most popular blades on the market make this a must-have.